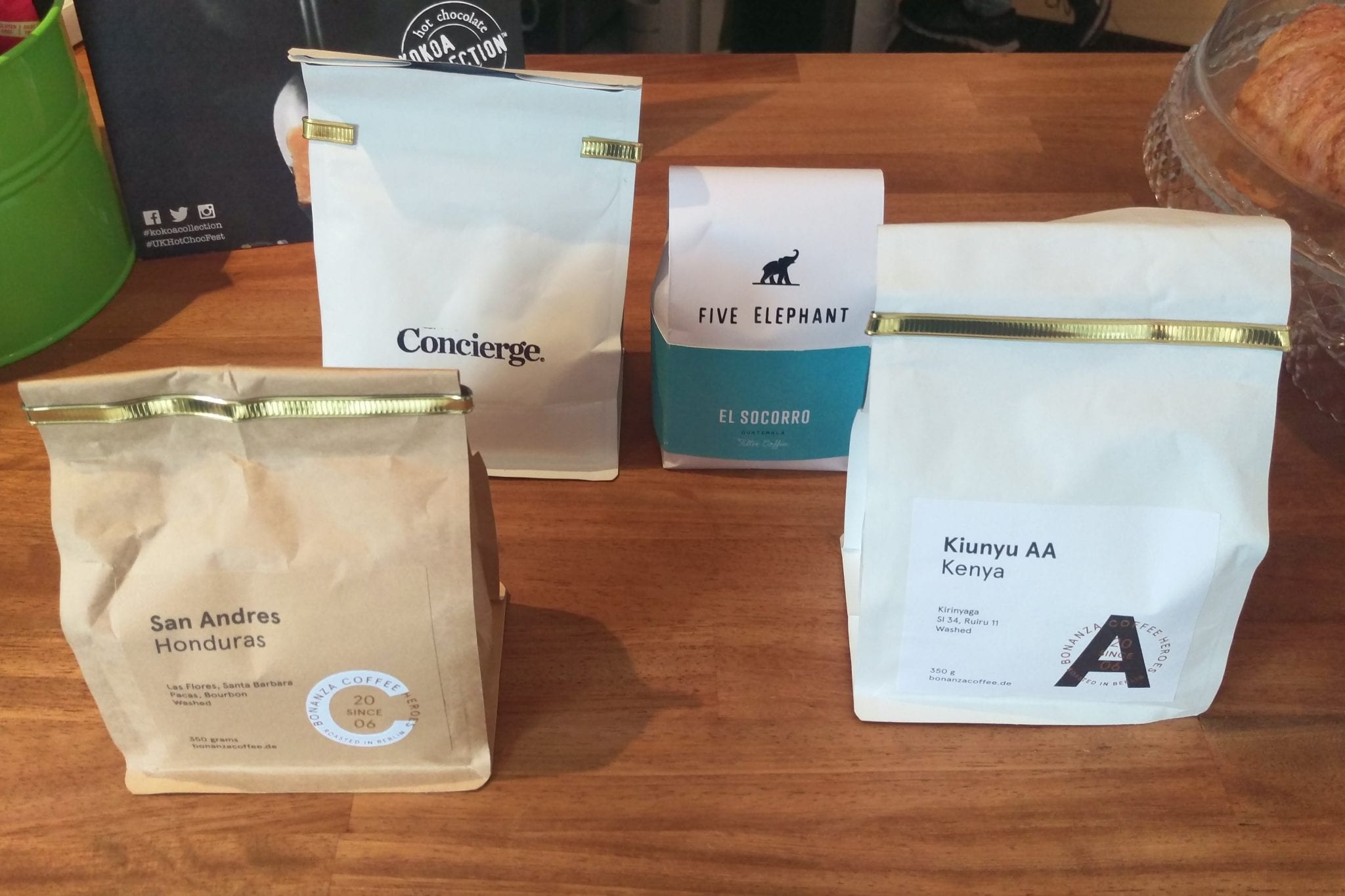 London has an amazing and varied coffee scene. But when people give recommendations, it’s often the big, established names or the hip and trendy places of Soho or Shoreditch that get mentioned. The thing is, London’s got a lot more to offer than that – particularly if you’re prepared to get off the beaten track.

So in that spirit, let me present a short tour of five coffee shops worth visiting.

Why Should I Visit These 5?

I’m not making any grandiose claims that these five are the “best”, whatever that might mean. However, I love them all and, in picking the five (I could have chosen plenty more, believe me!) I’ve gone for places with a strong connection with the owner/operators.

They also showcase the variety of coffee that’s available in London, from places that roast their own to genuine multi-roaster cafés which change the beans on offer every week or two.

A Tour of London Coffee Shops

We’ll start our tour in Hackney. Silhouette is an interesting fusion of Wales (Lee) and Malaysia (Syirin), who ran a pop-up in Chinatown before moving east at the start of 2015. A small spot on the corner of Bayford Street, just off the busy Mare Street, Silhouette has a simple, square layout with the counter at the back. South-facing windows flood it with light and there’s a welcoming neighbourhood atmosphere to the place. 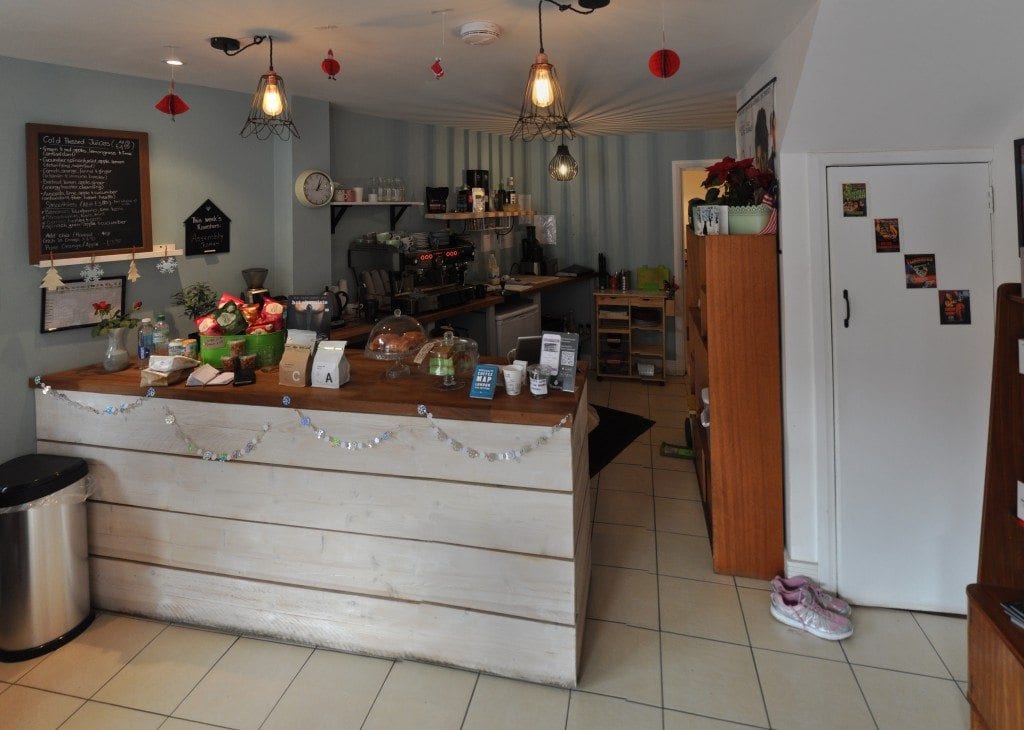 The business end of Silhouette.

This coffee house is a product of Lee and Syirin’s passion for coffee. They only take small batches of beans from a rotating cast of roasters, with an emphasis on South West England and the Welsh Borders; last time I was there, the filter coffee was from Ross-on-Wye’s James Gourmet. This means that the coffee goes into the hopper and, when it’s gone, it’s gone.

While there’s, of course, espresso (from Workshop, as of my last visit), Silhouette has a particular emphasis on filter coffee, with anything up to four or five typically single origins on offer. Silhouette prefers the Kalita Wave, but will use an AeroPress or Chemex if you ask nicely. 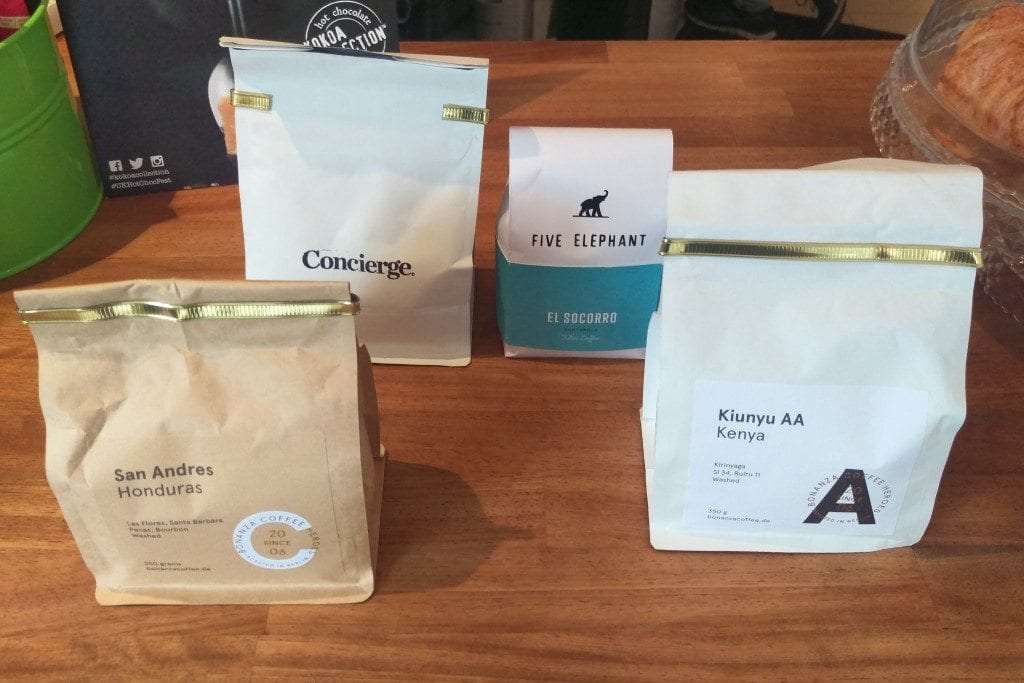 Sometimes you get a bonus at Silhouette. In this case, Syirin had been to Berlin and had brought back some coffee…

There’s also food, all freshly made on site, with bread from a nearby bakery supplying a menu heavy on toast/bagels, things on toast/bagels, and salads. One or two Malaysian dishes also appear on the lunch menu during the week. As for cakes,  the options include Kuih Bakar, a moist Malaysian offering made of coconut milk, flour, eggs, sugar, and pandan leaf; the latter gives it a distinctive green colour. Syirin summed up their food philosophy for me: “We only make things we’d eat ourselves”.

From Silhouette, it’s a 20-minute walk through Broadway Market to our next stop, Lanark Coffee, on the busy Hackney Road (if you’re near King’s Cross, Lanark now has a second place on the Caledonian Road, where Drink, Shop, Dash used to be). 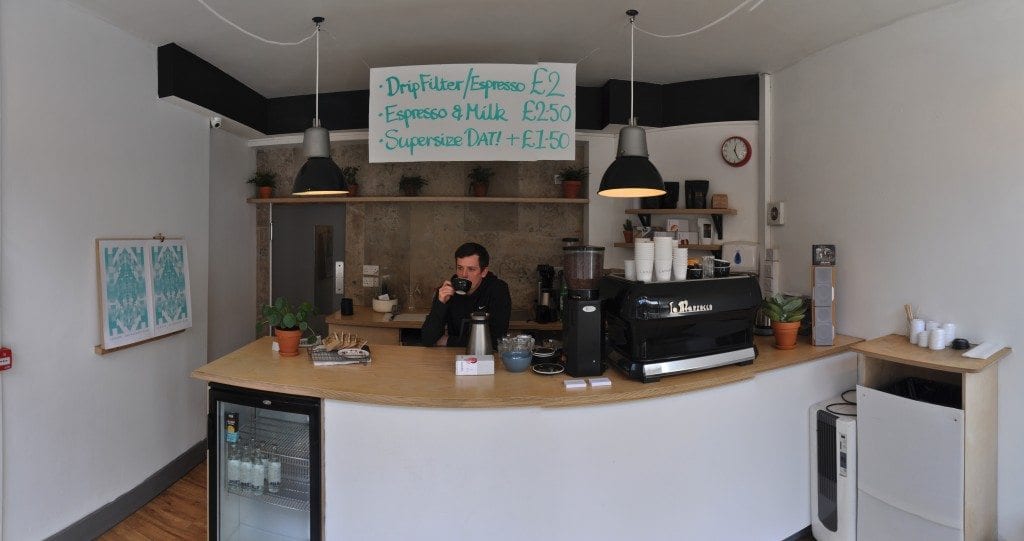 The other place. Lanark’s second branch around the corner from King’s Cross.

Lanark’s the brainchild of Greg and Dom, who split their time between the two sites. The Hackney site has one of the weirder layouts I’ve seen in a coffee shop, long and thin, but with the long side facing the street. Despite this, it works rather well.

Lanark’s the smallest of the five places we’re visiting, and it’s not helped by about a third of the space being taken up with the stairs down to a furniture workshop and the kitchen. Despite this, Lanark manages to cram in a few seats and a lovely Victoria Arduino lever espresso machine, with enough space left over to serve filter coffee through the Chemex. 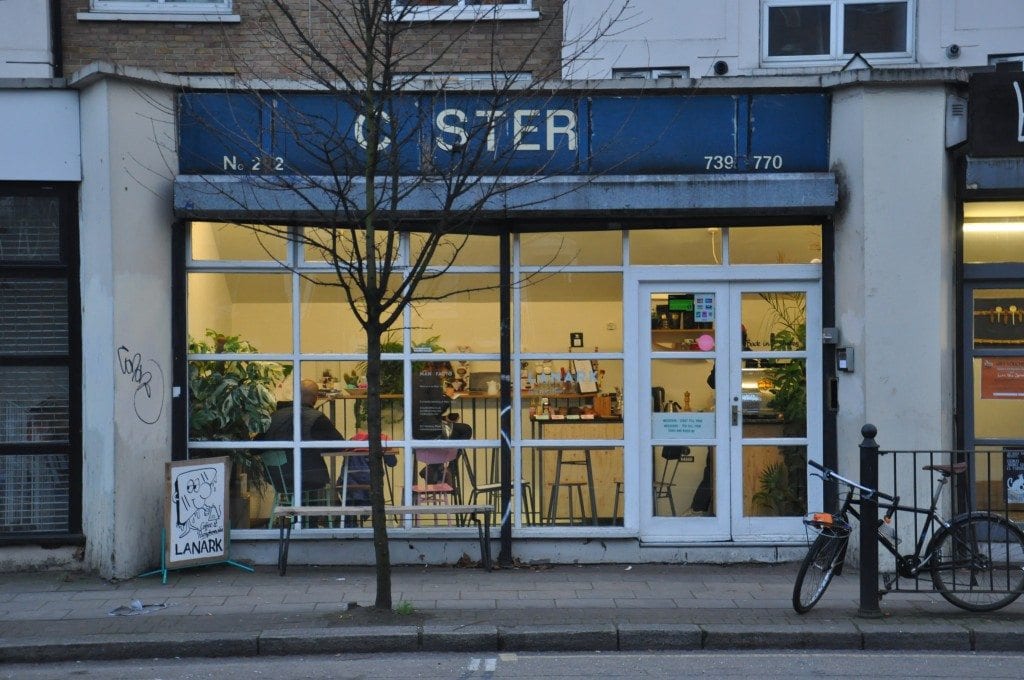 The welcoming exterior of Lanark Coffee.

In fact, the size is perhaps one of its selling points. It’s so small that you really can’t help getting drawn into conversations with Dom, Greg, and the other customers!

Like Silhouette, this is a multi-roaster coffee shop, ordering only a few kilos at a time. However, Lanark has some tried-and-trusted roasters it keeps coming back to, such as London’s Alchemy and newcomers Assembly. I popped in just before Christmas when Greg pulled me an amazing Kenyan espresso from Square Mile.

As for the food, there’s a decent, if limited, range: three types of cheese toastie, salad, omelette, and three choices of things on toast (peanut butter, avocado or scrambled eggs).

Our next stop is a 45-minute walk south from Lanark. White Mulberries can be found in Saint Katharine Docks, just to the east of Tower Bridge on the north side of the Thames. You have to look for it, fighting your way past any number of generic chain restaurants and coffee shops. It’s worth it, though – particularly on a sunny day, when its south-facing windows are drenched with sunlight. If you’re lucky, you might even get a view of the Queen’s Barge, Gloriana, tied up across the water. 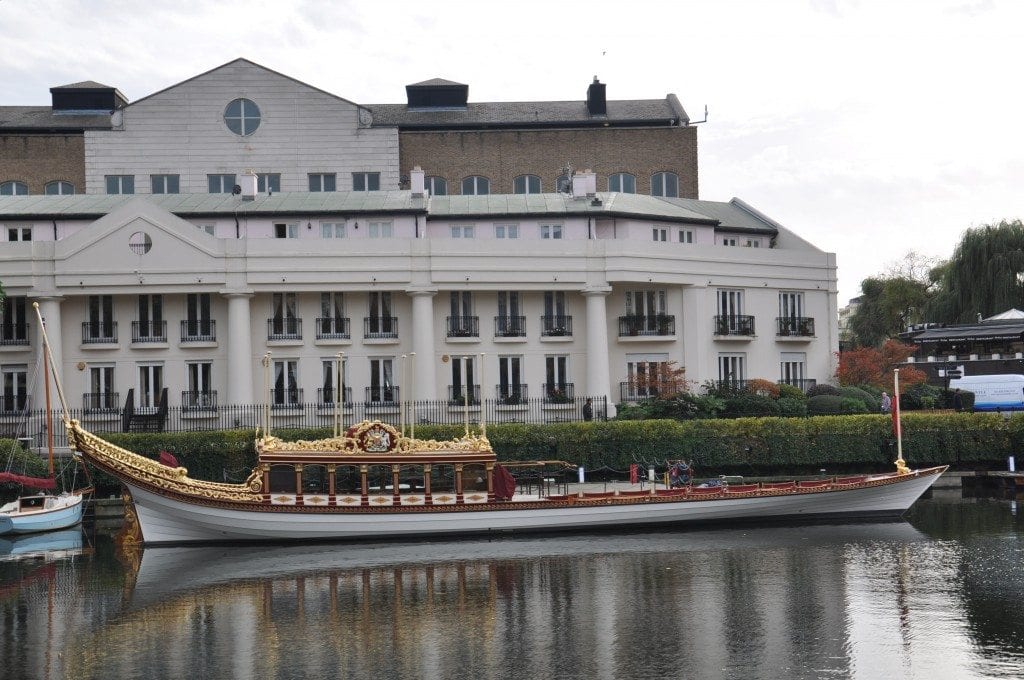 The Gloriana, as seen from the window of White Mulberries.

However, the things that really make your visit special are Peyman and Rana, the Iranian husband-and-wife team who run the coffee house. They are quite possibly the nicest people in coffee, and have created a wonderful, welcoming atmosphere – which their excellent staff maintain even when they’re not there. In fact, Peyman spends so much time chatting with the customers that I’m amazed that he ever finds time to make coffee!

In size, White Mulberries is somewhere between Lanark and Silhouette, with just enough space for some tables along the wall, a window bar, and some seats outside on the waterside walkway. 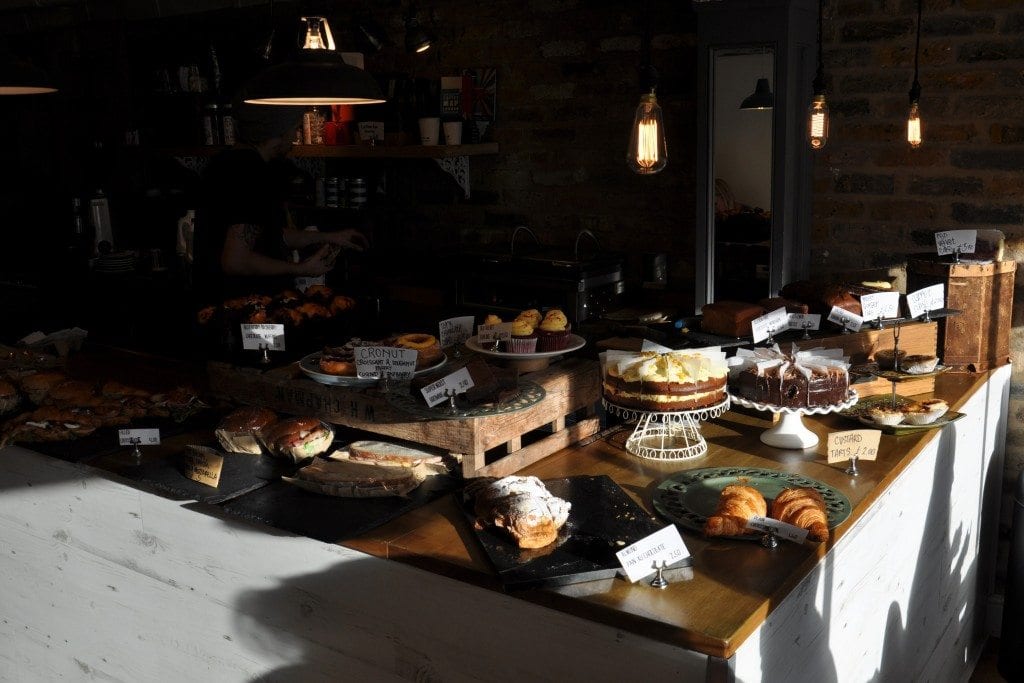 The lovely cake display at White Mulberries, caught in the winter sun.

The coffee (espresso only) is usually from London’s Allpress and Nude Espresso, supplemented with regularly changing guests. There’s always an array of tasty cakes and sandwiches to tempt you; White Mulberries serves a standard, but extremely good, coffee shop selection. The last time I was in, I had an amazing toasted cheese and tomato sandwich.

So far we’ve been on foot, but hopefully, you’ve brought your Oyster Card: our next stop is on the other side of London. It’s a 35-minute ride on the District Line, departing from the nearby Tower Hill on the line to Wimbledon. Get off at Putney Bridge and, as you come out of the station, you’ll see Doctor Espresso’s Caffetteria on the other side of the street.

This is the original, which opened in 2013 and has since been joined by two more. The second, known as Mama V’s, is on Clapham High Street while the third (and so far final) is just around the corner on Fulham Palace Road. 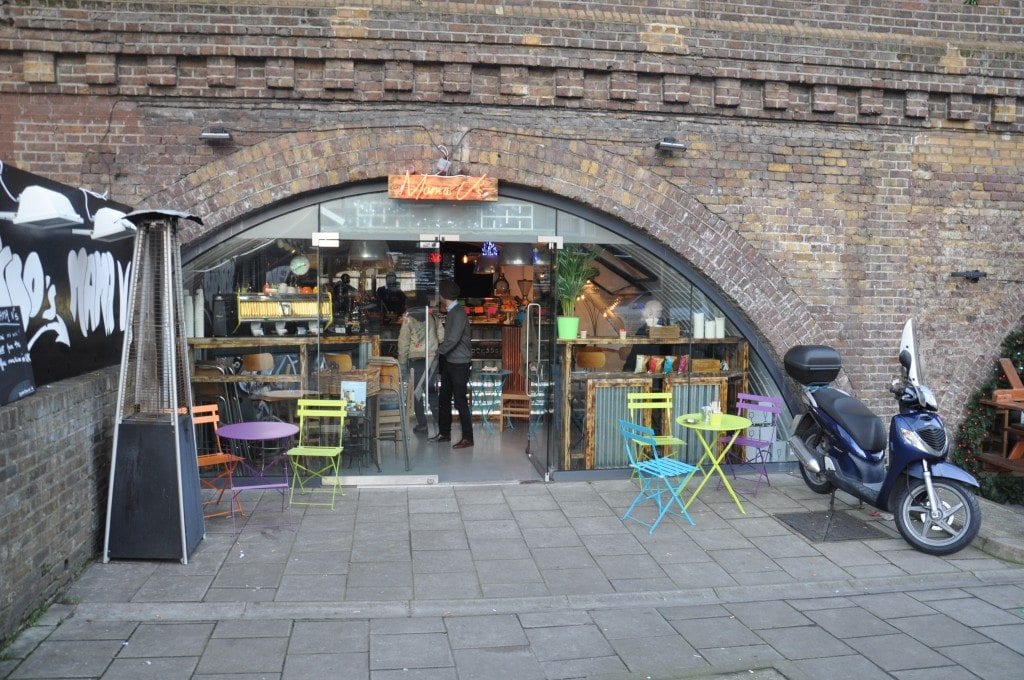 The original’s claim to fame is that it has, in its three-group Gaggia Tipo America, London’s oldest working espresso machine. This is another gorgeous lever machine and it takes pride of place on the front of the counter, overlooking the small seating area that’s wedged in between it and the window. Alternatively, if the weather’s nice enough, you can sit outside at one of the pavement tables.

The Gaggia was restored by none other than Doctor Espresso himself, aka Russell. Along with his partner, Vanessa, he runs the three Doctor Espressos. Like Lee & Syirin, they’re an interesting mix – in this case, of Northern Ireland (Russell) and Italy (Vanessa). The Caffetteria feels like a slice of Italy, particularly as the staff are mostly Italian; it fills the place with a busy hum of (to me, unintelligible) conversation. 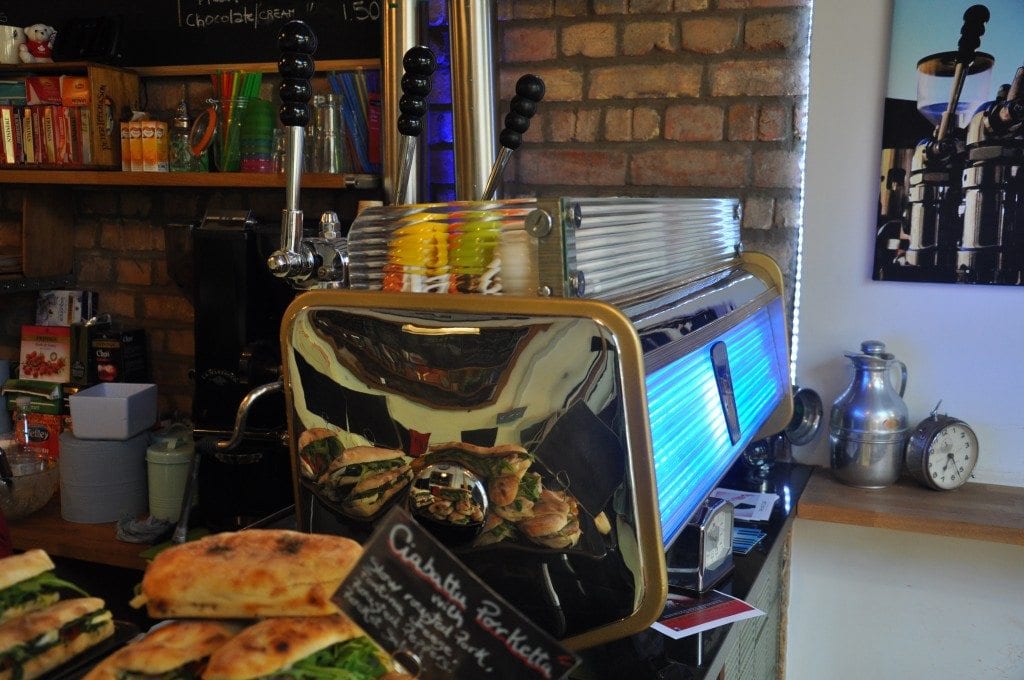 As you might expect, there’s a range of Italian café food, including ciabatta, pizza slices, and (my favourite) individual calzone, as well as a salad bar. The coffee’s also Italian, but that’s no bad thing. Unlike the overly-bitter espresso you sometimes get in Italy, this is strong and smooth – just how I like it.

Our final stop involves another ride on the District Line, this time with a change of trains at Earl’s Court, before heading as far west as the District Line will take you. You’ll find yourself at Ealing Broadway station: as you come out, turn right and, midway along a small parade of shops, you’ll discover the Electric Coffee Company. I may or may not have saved the best until last, but I have definitely saved the oldest: the Electric Coffee Company first opened its doors way back in 2008.

Run by another husband-and-wife team, Simon and Oksana, the Electric Coffee Company’s easily the biggest of today’s stops. In fact, with a little bit of squeezing and trimming, you might just be able to fit the other four inside. 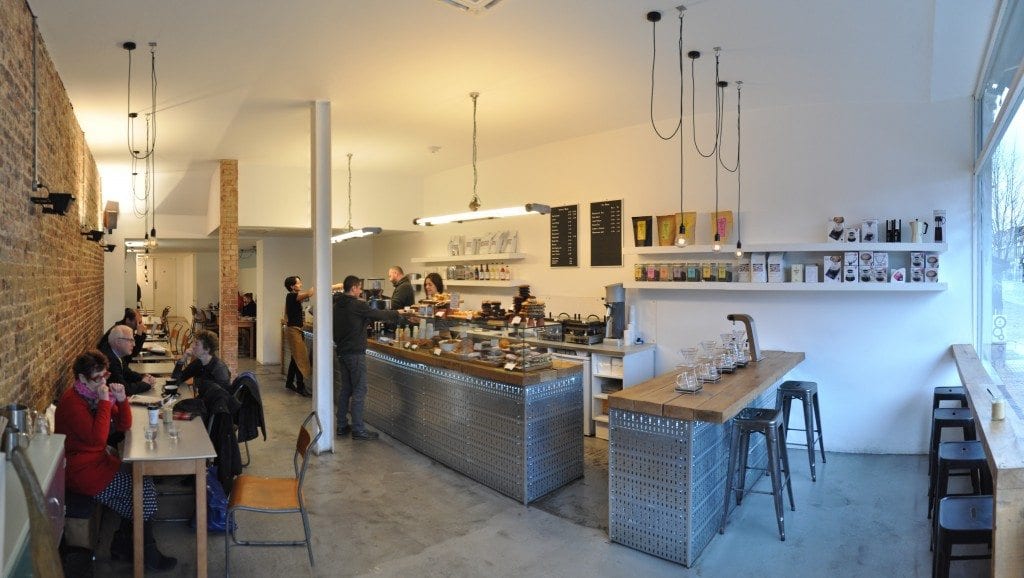 The Electric Coffee Co, as seen from just inside the door.

These days, it roasts its own coffee under the label Electric Coffee Co, with a state-of-the-art roastery down in Sussex. Back in the coffee shop, a splendid Kees van der Westen Mirage espresso machine takes centre stage on the counter, dispensing shots of the house blend or a regularly rotating single-origin. A standout in the second hopper was an Ethiopian Ayehu G3 Honey-processed coffee which I had last year. Very smooth and sweet, it was not at all what I was expecting!

At the front end of the counter, facing the window, there’s a brew-bar which offers pour-overs. The choice of beans is paired with a specific method and changes every few days. 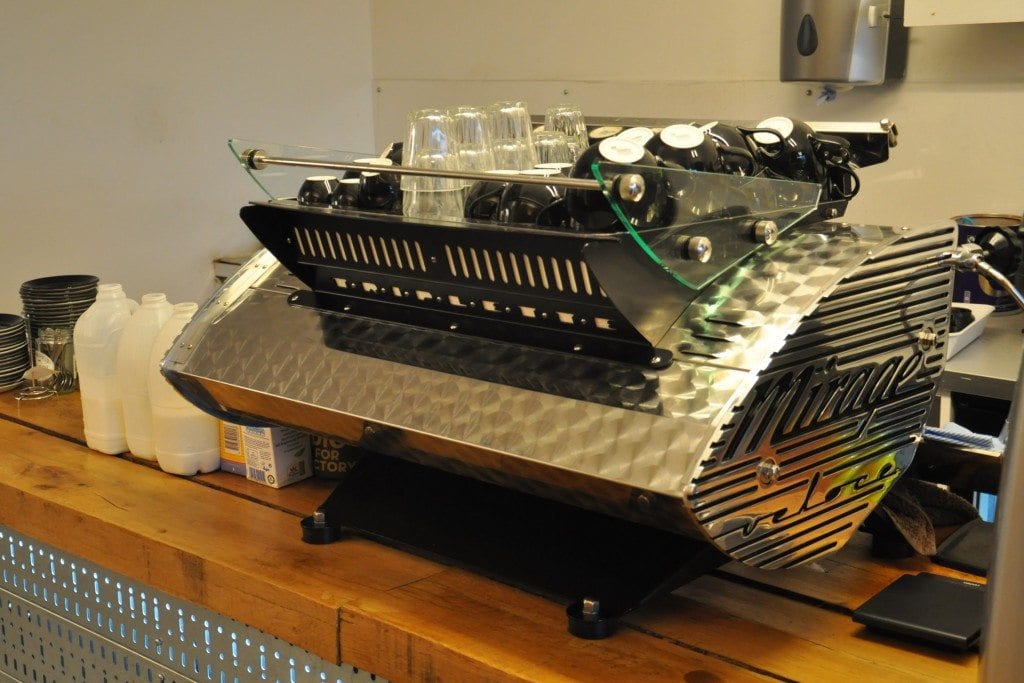 Between there and the Kees van der Western, the counter is laden with cakes, pastries, and various lunch options. Had we started our tour here, you could have had breakfast! The Electric Coffee Company serves up various options, including that old favourite, toast. It’s an often overlooked piece of food, but personally, I love a place that serves a perfect slice (or two) of it.

However, since we’re at the end of our tour, it’s more likely to be lunchtime, so why not try the homemade pepper, courgette, and feta quiche that I had when I first visited? Served hot or cold, it comes with a crunchy side salad. Or, if you’ve lingered at each of the stops, maybe it’s time for a slice of cake to go with your coffee.

Either way, take a seat, settle back, and reflect on a day well spent, getting over-caffeinated while off the beaten track of London’s amazing coffee scene.

Brian is a contributor based in the UK