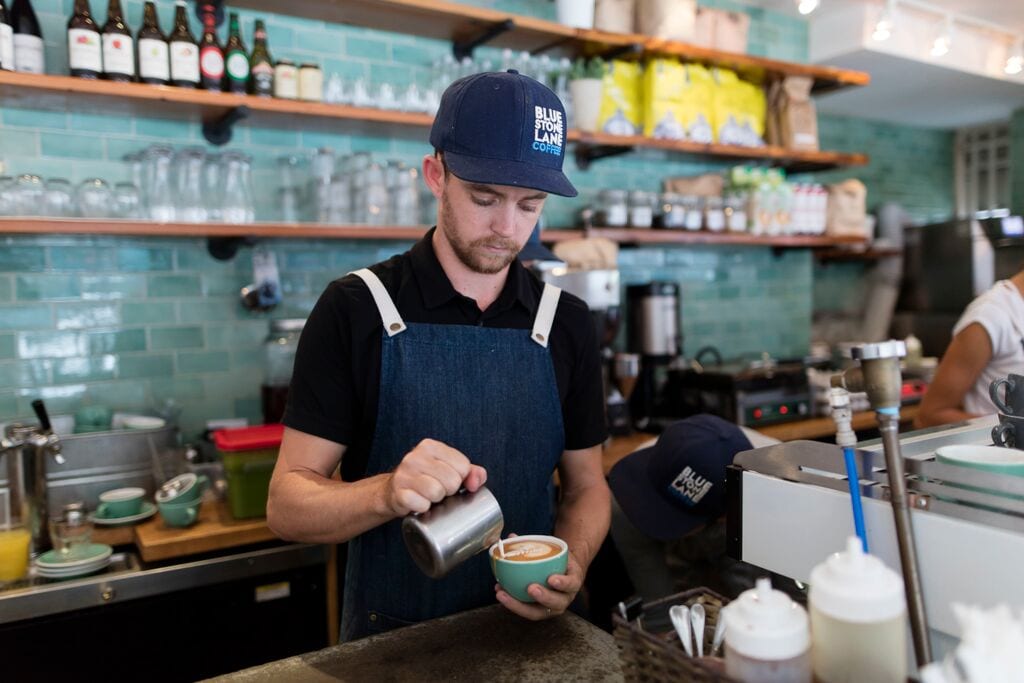 As an Australian-trained barista with 12 years experience, I’m one of the lucky ones that watched the 3rd wave of coffee hit our sunburnt country. And “hit” is definitely the right word; almost overnight we went from steaming milk so hot it almost leapt out of the cup to discussing flavour notes and comparing microlots. Scooping foam out of a jug and dumping it on to thin, boiling milk was out; instead, velvety micro-foam found its way onto our coffee menus.

SEE ALSO: A Smoked Rosemary Macchiato? – the Role of the S. American Barista

European influence in the form of post-war Italian migrants is what gave us a head start in the coffee world; third wave arrived here years before it hit the chain-influenced United States. Maybe our world-renowned culture of taking things slow meant we had more time to appreciate quality espresso (although maybe I’m just biased). Yet regardless of why, Australians baristas and consumers are some of the luckiest on Earth.

From Noosa to New York

Six months ago, my wife and I moved from the beach town of Noosa, Australia to work with the incredible team of Bluestone Lane Coffee, New York. Noosa, population c. 50,000, in my opinion, has some of the best coffee per capita in the world. You may doubt me, but it’s a seaside destination so career options outside of hospitality are limited, and with travellers from all over the world visiting daily, we have no choice other than to punch above our weight.

I’d already been travelling to New York annually for the previous 12 years, watching and patiently waiting for my first wow coffee experience. In 2011, I heard rumors of places like Bluebottle and Intelligentsia finally hitting the West Coast and providing a first-class coffee experience, and I knew it had finally begun.

Yet arriving in New York, my expectations were still fairly low. Specialty coffee had only been around for a few years—how could it possibly compare to the coffee back home?

I had no idea how perfect my timing was. I knew a movement was happening, but I’d thought of it as a slow-burning, barely-developed, baby movement. I was wrong.

Latte art smackdowns: an excellent way for baristas to connect and challenge each other. Credit: timjcoffee

If Australian Coffee culture is an adult, then New York is its teenage brother. The West Coast coffee movement has been happening for a few years now, with big players like Stumptown and a bunch of others locking down brew ratios and turning extraction into an art form. Seattle set the bar (pun fully intended) and years later, those ripples are being felt on the far away East Coast. Australian-style cafes are also standing out in the Big Apple, with places like Bluestone Lane, Two Hands, and Little Collins getting more and more attention each week while Toby’s Estate is well-established .

New Yorkers and a weekend brunch now go hand in hand. There’s also been a welcome and substantial shift in service: it’s no longer so grab-and-go. Many venues are now offering table service and extended brunch menus that are turning coffee into a weekend ritual meant to be savoured, rather than a fuel to be consumed in haste.

Winning Americans Over With Specialty Coffee

I’ve seen some places make the incredible shift from 80% hot brew (drip coffee/percolator, whatever you want to call it) to 80% espresso-based beverages. Sure, it takes a little bit of education and patience from the barista, but once a customer has tasted that first perfectly blended, roasted, and extracted espresso topped with a little lovingly steamed milk, they’re hooked.

Social media is helping the growth of specialty coffee, as like-minded baristas gather in online communities dedicated to everything from filter brewing guides to coffee roasting resource centres, and latte art showcase groups to smack-downs. Places like Irving Farm Roasters (who help set up these meetings) and the Brooklyn Roasting Co are pushing this movement and customer expectations are growing. Single origins and blends are are having their best flavours highlighted as shots are being weighed in and out in more and more cafes. Frappuccinos may still be king—but they had best watch out.

New York feels like Noosa did when I first started making coffee back in the early 2000s, only bigger, faster, and with every bit of intensity you’d expect from the city that never sleeps. It’s a great time to be a barista in New York City.

Jai is a contributor based in USA