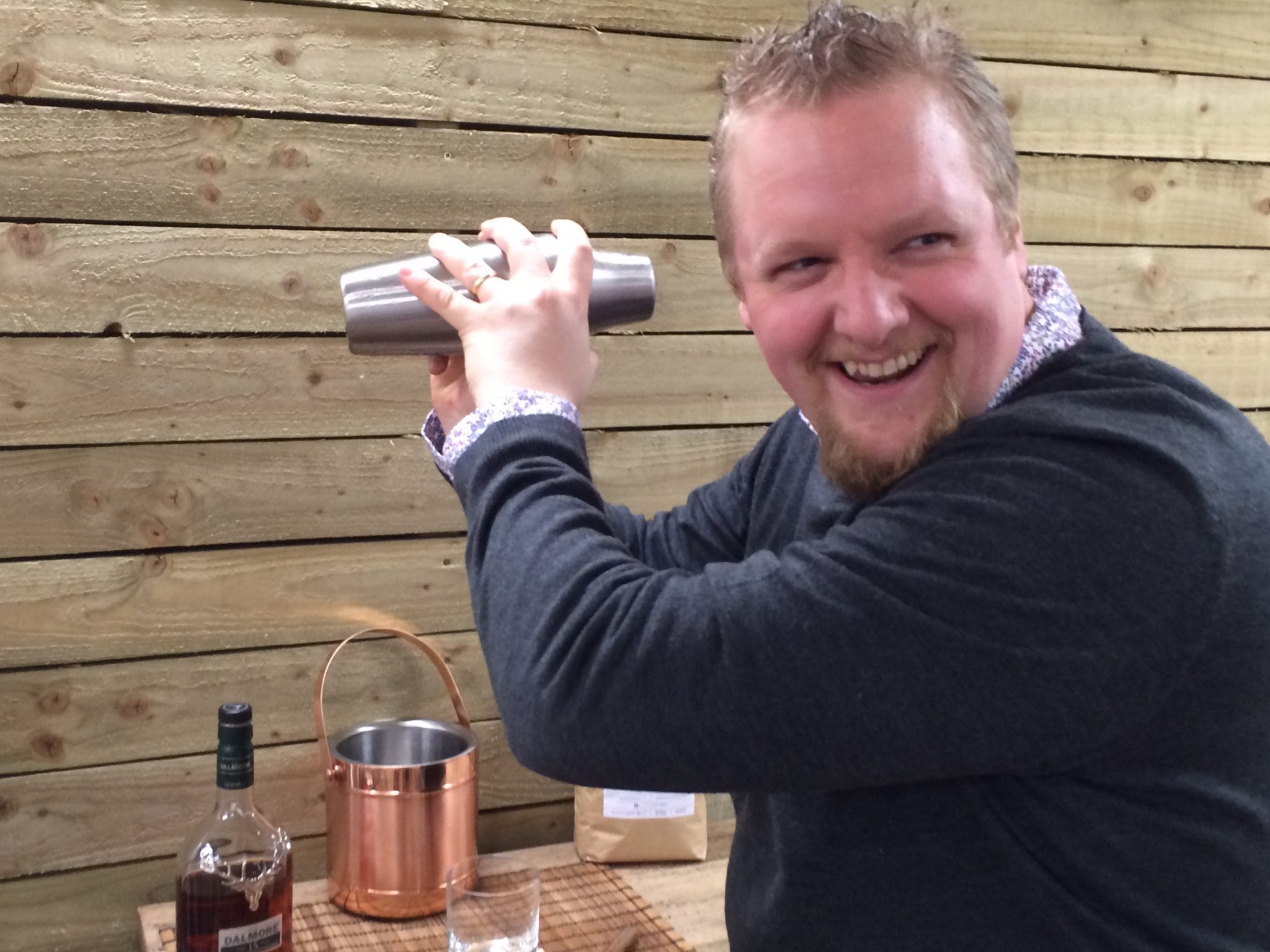 The World Coffee in Good Spirits Championship (WCiGS) may be fun, but it’s also extremely challenging. You have to be innovative, you have to understand not just coffee but also alcohol, and you have to think fast and strategically.

And if you’re wondering about that last one, it’s thanks to the Spirit Bar: a new round that debuted this year. Drawing inspiration from mystery ingredient tasks, it puts your ability to design delicious cocktails while balancing numerous restrictions to the test. This make it an excellent exercise for those wishing to improve their coffee cocktail game.

As a 2016 Finalist, I experienced the difficulties of designing Spirit Bar cocktails. I’m here to share with you the lessons I learned. 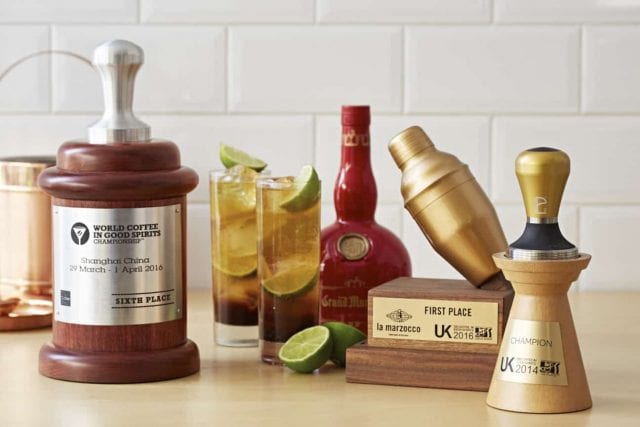 The Challenge of the Spirit Bar

Part of the preliminary WCiGS round, the Spirit Bar requires the competitor to brew two identical cocktails in five minutes, using a filter brewing method, while on stage. But there’s a twist.

They also have to use a syrup from the full range of one of two syrup sponsors. AND each drink has to contain at least 10 ml from one of three sponsored alcohols – not that you get to choose which. The alcohols are announced four weeks prior to the competition, and the organisers roll a dice to decide which one you must use right before you go on stage.

The idea is to level the playing field a little bit between the bartenders and the baristas. This year, the options were Grand Marnier, Skyy Vodka, and Kavalan Single Malt Whisky. They’re three very different drinks, and you don’t have long to decide on your strategy and develop a recipe.

How on earth do you go about doing this? 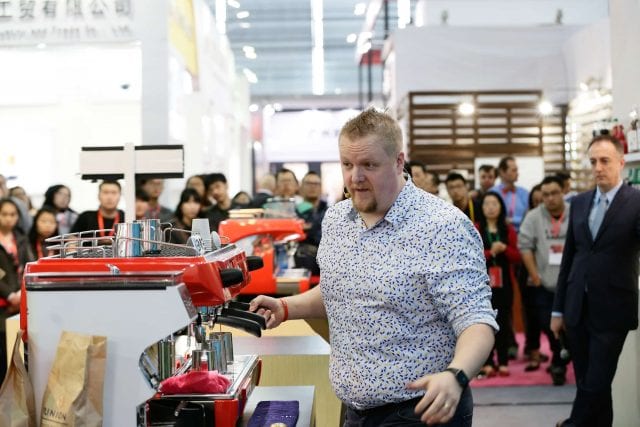 David Jameson behind the espresso machine.

There are three options available to you.

1. Develop a different recipe for each drink.

Pros: you have open range – your recipes can be tailored to each alcohol, helping you to make the best possible drink you can.

Pros: you know exactly what you’re making, no matter what drink you’re assigned.

Cons: designing a recipe that doesn’t just use all three but also highlights them, without being too strong, is a challenge.

3. Develop one recipe with three different base spirits.

Cons: will your recipe suit all the spirits offered?

I opted for option number three, creating one recipe that suits three different base spirits. But before we look at how to develop a recipe versatile enough to suit three cocktails while also good enough to potentially win a championship, let’s look at an example of someone who chose option two: one drink that features all three spirits. Except he didn’t use three; he used four… 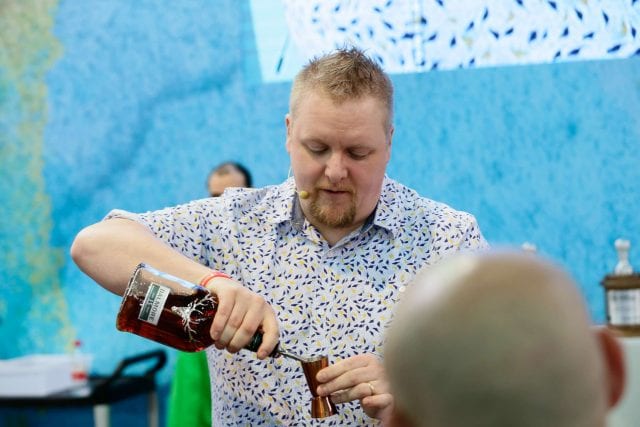 How many spirits can you squeeze in one drink? David Jameson on stage.

The Case for Using Four Spirits

The 2016 French Champion, Mikaël Portannier of Café Lomi in Paris, took inspiration from traditional cocktails to create what a Long Island Iced Tea. I had a chance to speak to him, and he was happy to discuss his choice to me.

He explained that Skyy Vodka added strength; Kavalan Whisky enhanced the coffee notes; Grand Marnier, when used as a topping, reflected the Triple Sec topping of the original Long Island Iced Tea; and then Bombay Sapphire East Gin drove the floral notes. (Recipe at the end.)

Nir Chouchana, the 2014 French Champion and Mikaël’s coach, suggested to Mikaël that it would impress the judges and organizers, who probably expected that putting the three spirits in the same cocktail would make a “coffee soup”.

So was it the perfect solution? Or a one-time possibility?

“I will compete in the championship again next year but I don’t think I will do this again. I think the judges and organizers will change the rules and they will not give the same spirits as before,” Mikaël said. “Maybe they should give a “mystery box” with four fruits, one spirit, one syrup, and one juice or a soft drink and say ‘okay, make the best coffee cocktail’. Then we’ll see the real bartenders at work!”

Having decided to use one recipe with the three different bases, I had to create that recipe. And the first big decision was hot or cold. This choice will impact the rest of your decisions, so make it carefully.

Now I’ve worked hard over the years to find a great hot cocktail recipe that will complement a variety spirits – but I’ve really struggled to find one that I really like. This steered me towards a cold cocktail in this situation.

Interesting, Mikael also chose his Long Island Iced Coffee in part because it was a cold cocktail. “[They] are easier to drink for judges and they impress by their freshness, and the fizzy touch brought something different,” he said.

This adds another challenge to the mix, however, because now I needed to brew coffee, chill it, and make the cocktail in 5 minutes! What’s more, I had to make sure that the coffee wouldn’t be too weak after I’d diluted it with cold ice.

This may look like a hot Irish coffee – but it’s a cool Nicola Bailey (recipe at the end).

The smaller the volume of liquid, the quicker it will lose or gain heat. This makes espresso the obvious choice for cold drinks – except that the Spirit Bar has no espresso machine. And most filter coffee methods will need a three or four-minute brew time, which doesn’t leave it long to cool down.

The solution to all my Spirit Bar woes? The trusty AeroPress. You can produce filter coffee relatively quickly, it will have similar levels of intensity to espresso, and  you can adjust grind settings to deliver a good quality finished coffee even once it’s been diluted with ice.

I found was that when I brewed to a classical ratio (e.g. 60g/litre), after adding the spirits and ice my coffee was too washed out. The flavour was just too insipid to score well.

Instead, I started to look for recipes with much higher extractions and strengths, knowing that I was going to back off in due course and finish up with something that had some balance. I eventually settled on 30g coffee to 100g water at 96 degrees, ground very fine and stirred extensively for a minute, before leaving it to settle for a minute and then pressing through (using the inverted method).

On its own, this yielded an overpoweringly strong brew – it wasn’t nice to drink! But once mixed, it punched through my other ingredients with a sweet and distinctive coffee flavour. It was doing precisely what I needed it to do.

But coffee and alcohol weren’t my only ingredients. 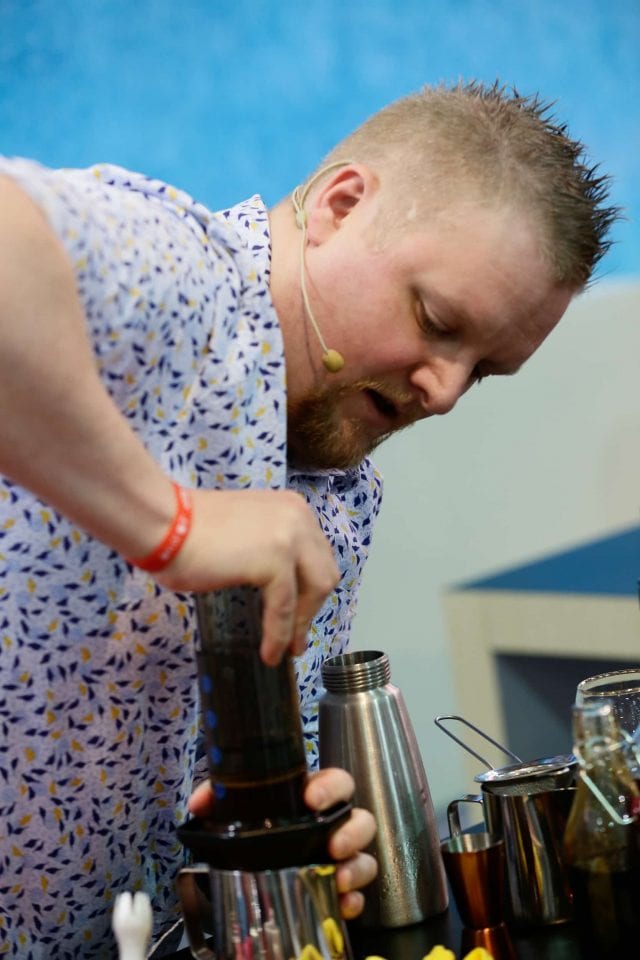 The AeroPress is a solution to many of the problems faced by David Jameson.

Using syrup is a relatively alien concept to me; I prefer to taste the coffee instead. I wanted something with a reasonably neutral flavour and, don’t forget, something that will complement a range of spirits. Since I always found that vanilla-flavoured ones taste weird, I went for caramel.

I knew that this was potentially self-limiting – what if I found a pomegranate and lychee syrup which was both magnificent with my coffee and brought out the very best in the Whisky? Well, “what if” is fine – but what if I didn’t? I wasn’t going to have time to test everything.

One Christmas, I was messing about with some leftovers in my kitchen and tried to make a pre-mix Irish Coffee. I made some simple syrup, added some whisky, cold brew, and cream and mixed it all up together. The end result looked a lot like a famous Irish Cream liqueur – and the inspiration came from there.

I knew that this recipe would work with the Kavalan Whisky. I tested it with the Grand Marnier, which was even better! When testing it with the Skyy vodka it was less exciting, but still pretty tasty – especially with a little bit more caramel syrup. (All recipes at the end.)

The best news was, no matter how much I waffled, I was unable to go over the 5 minute time limit. 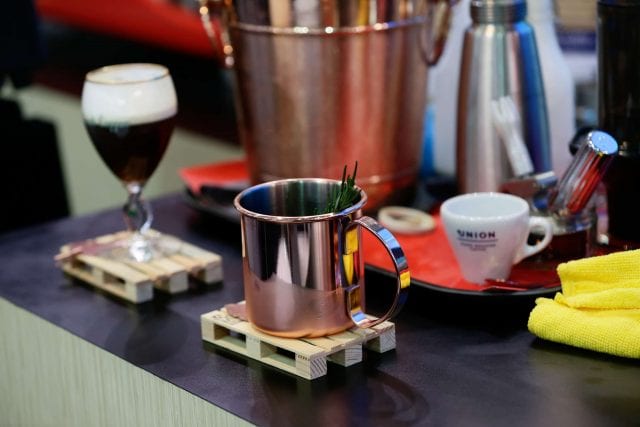 How much time do you have to get creative with syrups and garnishes?

Did My Strategy Pay Off?

The competition itself was extremely stressful – being so close to the audience, not knowing what you were about to prepare, was intimidating.

When my dice roll threw the vodka at me, I was really disappointed. Vodka has its place in the world, but as a coffee cocktail ingredient it adds lots of alcohol and very little flavour! Despite this, my scores from the judges in the Spirit Bar came back as being mostly Good or Very Good, which I was happy with.

The main feedback I had from my judges was that the drink was refreshing, with a very good mouthfeel, but that the caramel sweetness slightly overpowered the coffee and left the drink a little unbalanced! It’s a fair criticism. The vodka version of the recipe is the one I was least excited by.

My philosophy behind making this drink was that I needed to make something tasty that wouldn’t go over time and wouldn’t lose me too many points. Nobody in Shanghai was going to win the World Championship in the Spirit Bar – but several exceptional competitors did miss out on the final after losing a lot of points in the spirit bar.

So for me? I think it was a great success. Although it didn’t score as highly as my other drinks, it got me through to the final and that is all it was designed to do.

Most importantly, the people I tested this recipe on LOVE it! I have had a number of requests for the recipe, and I’m sure that it will be a Christmas party favourite! It’s one of those drinks too, that if you had to serve a lot of people, you could pre-mix, bottle and measure out fully formed. 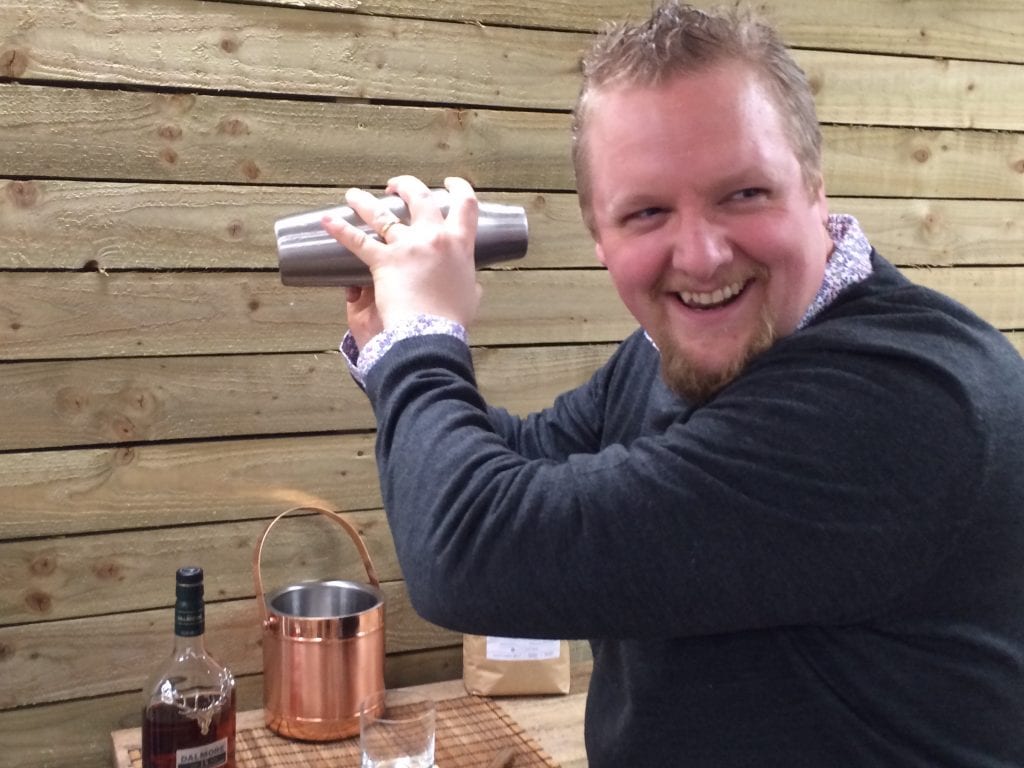 Want to make any of the drinks mentioned in this article? Here are the three recipes I prepared, as well as Mikaël’s Long Island Iced Coffee.

In a pastry siphon, pour:

Stir and garnish then top with 1cl of Grand Marnier 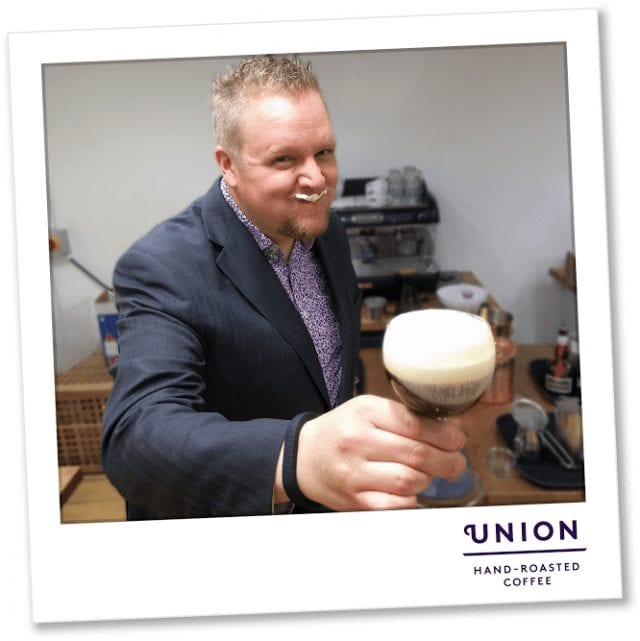 Cheers to that! David Jameson with an Irish coffee.

The Championship was on my wife’s birthday, so naturally my cocktails were named after her. They all used the same coffee, prepared in the same way, with the same glass. 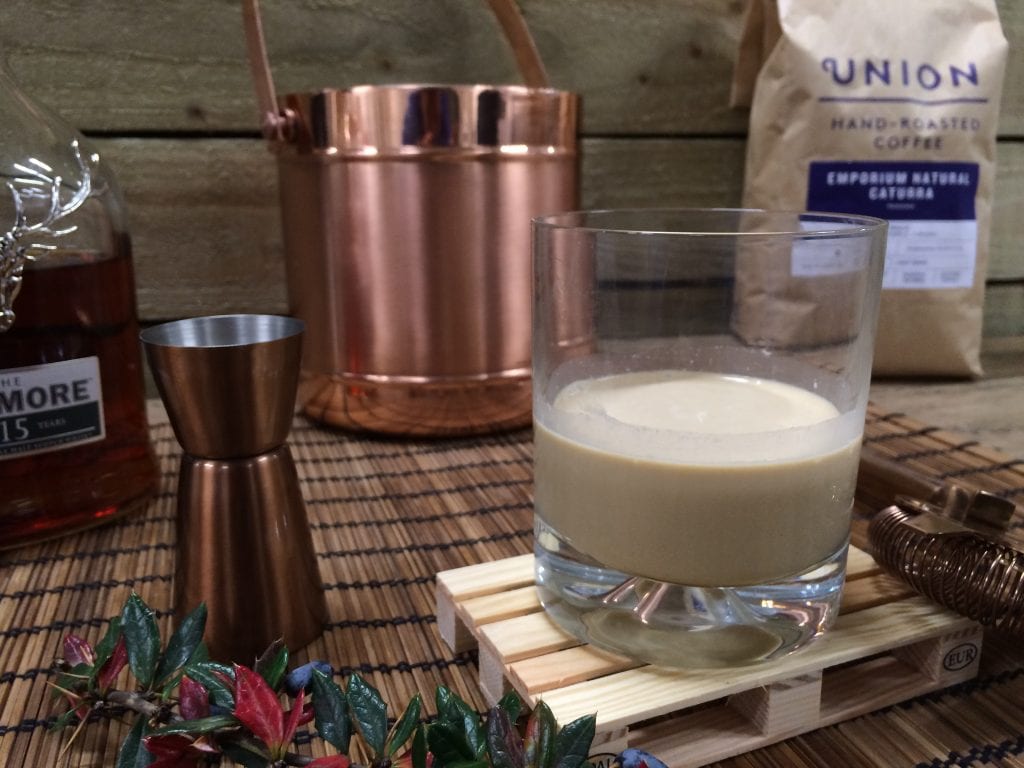 The Spirit Bar is one of the trickiest recipe development tasks I’ve faced in this competition. Short lead time, multiple drinks, and little opportunity to battle test them make it really difficult. Unusual ingredients, short performance time, and the necessity of chilling filter coffee make it even more difficult still. It’s a great challenge, and there’s no reason why you can’t create a fun and delicious drink even with these restrictions.

Give it a go at home next time you feel the need.

David is a contributor based in the UK