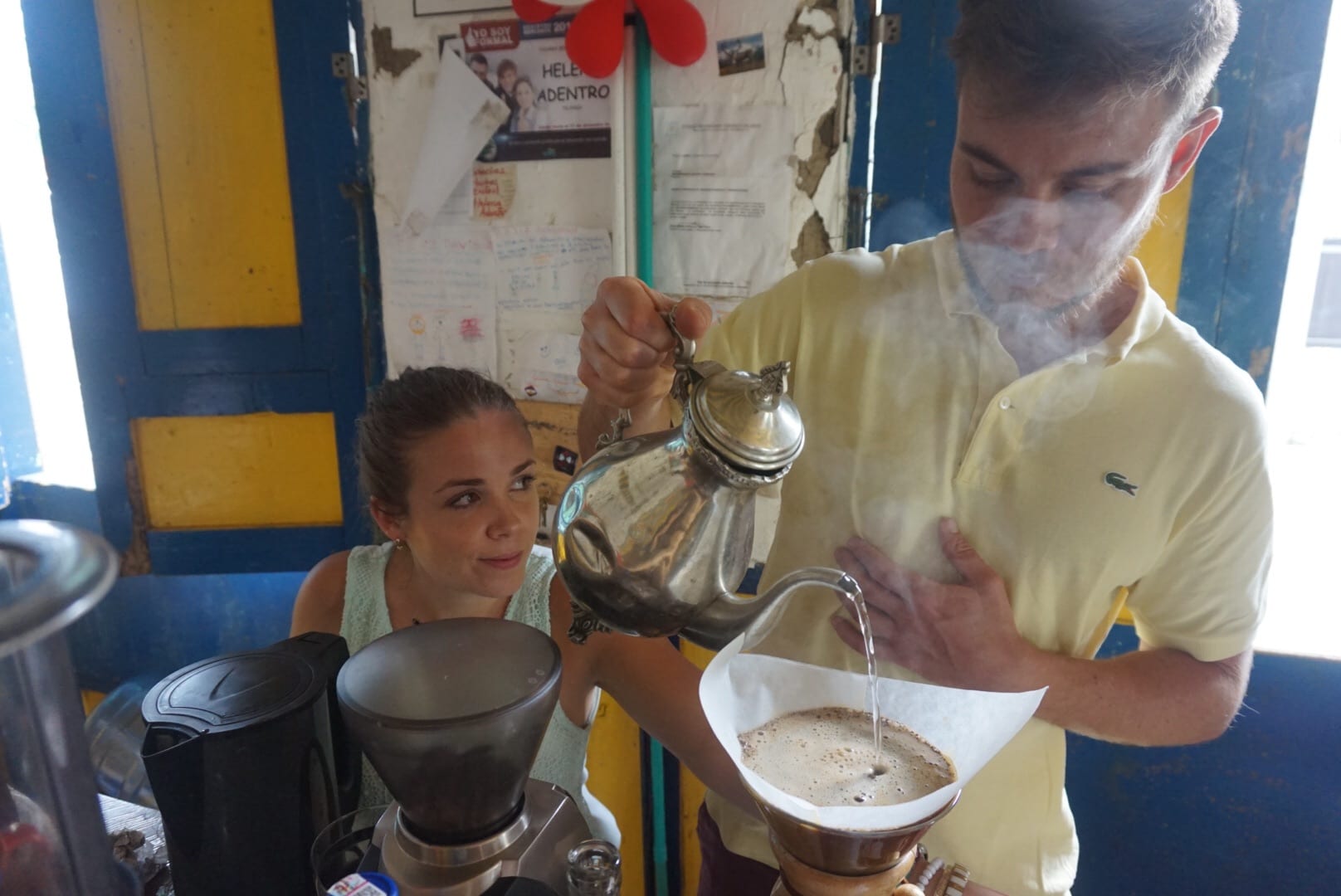 His name is Miguel Fajardo, but I call him “Mr Milkshake”. Why? Well, picture yourself on top of a hill in Solento (a popular tourist town in Armenia, Colombia) looking out over a gorgeous landscape, the Sun’s shining and you’re with some good people – golden beer drinking conditions. Unless you’re Miguel, who ordered a milkshake! I looked at him and asked, “Really?”, but he was determined. And so, from that day on he became known to us as “Mr Milkshake”.

The milkshake that brought Miguel to the yard.

How Did a New Zealand Coffee Geek Meet a Colombian Farmer?

I was introduced to Miguel, Alej and Jade through Matt Graylee, Director of Flight Coffee in Wellington, New Zealand and the initial handshakes were done via email. Jade, originally from Wellington, now lives in Colombia and Alej is Miguel’s older brother. Together, they run Helena Adentro, a restaurant in the small town of Filandia.

Alej and Jade, my hosts on arrival in Filandia.

In 2012, a farming initiative called the Helena Project was formed with Flight Coffee. The project has the admirable goal of transforming a commodity coffee farm into a super-specialty haven of rare and heirloom varieties under a native forest canopy. For Miguel and his family, this translated to them attaining a better price for their coffee by improving its quality. Initially, Alej,  Jade and Miguel ran the project together but as the restaurant became busier, Alej and Jade had to step back and Miguel took over Helena’s day to day operations. With Flight Coffee’s help, Miguel achieved marked improvements in the quality of their coffee, taking its score from 78 to 88. To put that in perspective, a cupping score of 78 is below specialty grade, 88 is specialty and then some.

So after few email exchanges with Jade, I hopped on a plane with my very poor Spanish, flew from Guatemala City to Fort Lauderdale (US), then to Bogota and finally to Armenia. An airport shuttle and a transfer later, I arrived at Alej’s house in the beautiful village of Filandia. I met Miguel the following morning, eager to explore his farm and see the Helena Project in action. At first I was surprised at how well he spoke English, but when I found out more about “Mr Milkshake”, it made sense.

So Who Is Miguel?

Miguel is 26 years old, educated and ambitious. He studied Industrial Engineering at the University of the Andes in Bogota, working for the Cinema of Colombia after graduation, before heading back to Armenia to help with his family’s coffee business. Miguel’s family began their relationship with coffee through his grandfather, who started a farm and worked as a coffee exporter for the US company, Cargill. Miguel’s father never encouraged his children to help with the farm when they were young and Miguel didn’t even start drinking coffee until he began working with the farm 3 years ago. Now he is cupping as much as he can, and studying to become a Q-Grader.

That’s Miguel on the left – he was thrilled I was taking his photograph!

It’s always interesting to hear different ideas about the terms ‘specialty coffee’ and ‘third wave’, so I asked Miguel what he thought. To him, specialty coffee is high-quality production controlled via constant cupping and proper labour management. He tries not to use the word ‘specialty’ with fellow farmers, instead, he prefers to have them cup their own coffee to decide if it is ‘special’. Miguel said that majority of the farmers in Quindio are not greatly concerned by specialty processes but he remains dedicated to fostering his own love of quality coffee through assisting those willing to adapt to new methods.

Flavour profiling is essential to Miguel’s approach because he see the third wave coffee movement as one in which consumers want to know every last detail about their coffee: Where was it grown? Which varietal is it? What was the altitude of the farm? Did they use that new black honey process I’ve been reading about? How buzzed am I going to be if I drink five in a row? Miguel knows what he wants, but getting local farmers to believe in him has been a challenge.

With the help of his friends at Flight Coffee, Miguel aims to produce not just coffee, but high quality specialty coffee and has had to do substantial research on coffee and how to run a coffee farm after returning to Armenia. As a young man with relatively little experience, he has to manage workers who are often much older than him and far more experienced. These have proven the hardest minds to change.

According to Miguel, the processing stage at the local wet mill is usually where quality is being lost. This is because many farmers have not been cleaning the fermentation tanks and milling equipment properly. Miguel learnt from his trip to Finca El Chelin in Mexico that unclean tanks creates bacteria and in turn create undesirable flavours during fermentation that carry through to the cup. To ensure that the tanks are cleaned between fermentation cycles, Miguel has resorted to supervising the process himself.

All coffee is fermented to a certain extent. Being a natural process, if tanks aren’t cleaned properly after a fermentation cycle, bacteria will bloom and the quality of the coffee will suffer.

While the Helena project was conceived as a way to help Miguel’s family to better organise production and secure a higher market price, they have had to sell their farm and the Helena Project has thus ended. Despite this, Miguel sees the Helena Project as an invaluable learning experience that will help him in his next project –  CoWork Coffee.

CoWork Coffee feels like a natural extension of the Helena Project. Banding together with other young farmers and friends from the Quindio region, Miguel is extending what he’s learned to other operators. This has become viable in recent years as like Miguel, many young people are returning to Quindio from larger cities like Bogota and Medellin as they see specialty coffee’s potential as a career path.

Currently, CoWork is a collective of four small businesses in Armenia: Cafe 360, Momentos de Cafe, Jesus Martin Cafe, and Helena Coffee. Three of these shop owners are Q-Graders. Flight Coffee are on board, as are Caravan from the UK and Good Karma from Germany who will all soon be importing CoWork’s coffee. The collective wants to help farmers assess and sustain the quality of their coffee and develop a consistent flavour profile through regular cuppings. They then seek to link them directly with international buyers. This is a move away from trying to tell farmers how to farm, which they aren’t too fond of. Miguel does however assist farmers on a case by case basis.  For example if a client’s farm is at low altitude and the farmer grows castillo naranjo – a regional adaptation of the castillo varietal developed in Colombia to be high yielding and resistant to leaf rust (roya) –  he may suggest a honey or natural process to draw out the the natural flavours of the coffee.

Before I left Armenia last September, Miguel told me he wanted to plant a few trees in his family’s backyard. His Mother, weary of her son’s growing obsession with coffee wasn’t so keen. Probably because Miguel’s idea of a “a few trees” is actually four hundred – a mix of bourbon and pink tabi – which he’s going to plant soon anyway! His inspired me to plant my own coffee tree here in (not so) sunny Auckland. I wonder if my landlord will be OK with four hundred?

Article edited by T. A. Jay.

What is the single stem system & how does it affect coffee production?
El Pino Coffeenomics: Why You Should Buy Third Wave
More Than Kopi Luwak: Specialty Coffee in Indonesia
Diversification in Speciality Coffee Farming: The Agricultural & Economic Case