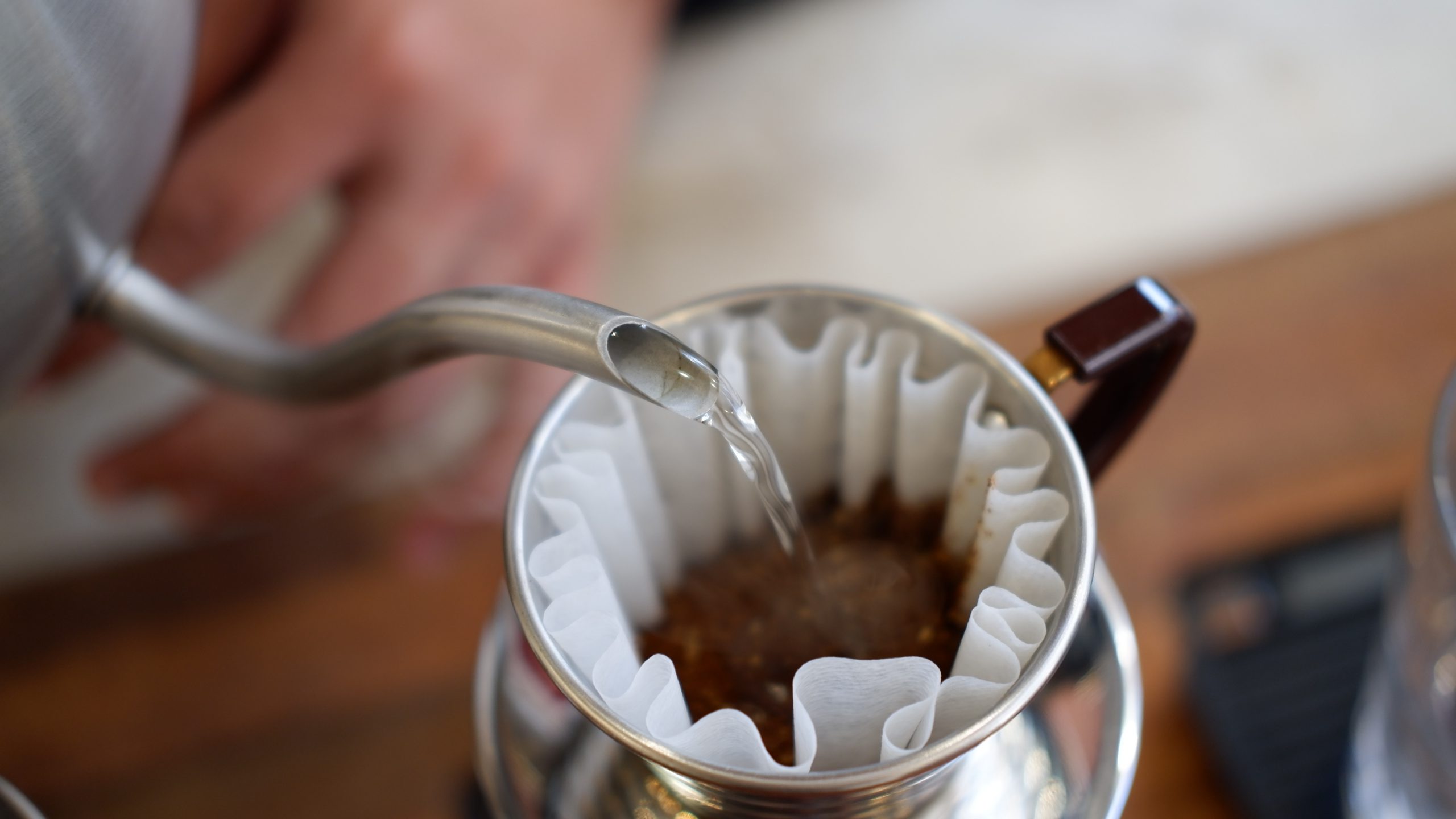 When brewing filter coffee, either at home or in a coffee shop, the goal is to get the most even extraction from your ground coffee and the best possible flavour in your cup as a result.

In order to ensure the coffee is evenly saturated with water, two of the most commonly used techniques are swirling and stirring the mixture, which is often referred to as the “slurry”. But which is best?

To learn more about these two brewing practices, I spoke to three coffee professionals from across the industry. Read on to find out what they said.

Why Should We Swirl Or Stir During Brewing?

Andrée Rios is an SCA certified barista living in Barcelona. He says that in order to achieve even extraction levels, you need to agitate the slurry.

“The main purpose of stirring and spinning is to improve the distribution of water among the grounds in the coffee bed,” he says. “This minimises channeling and dry particle resistance.

“Ideally, we should try to get our coffee grounds to contribute collectively and evenly from the first droplet of poured water until the last.”

The final appearance of the wet coffee grounds (known as “the bed”) can help the brewer assess their extraction.

“A properly distributed, homogeneous, and flat bed with little to no particles [high up the filter paper] is what we should always look for in our brewer at the end of the extraction,” Andrée explains.

“A flat bed is an indicator of correct pouring. It will help us ensure consistency in our recipe by creating even resistance in our coffee bed, which allows all particles to contribute at a similar extraction rate.”

The first phase of brewing is known as “the bloom”. This is when the water first comes into contact with the ground coffee in your dripper. At this point, it starts to release the gases (mainly carbon dioxide) which were absorbed by the beans during roasting. To ensure even extraction, it’s vital that as many of these gases are released as possible.

Jens Crabbé is the founder of MOK Specialty Coffee in Belgium, which has two locations in Brussels and Leuven. He says: “I suggest agitating during the bloom, to make sure the bottom of the coffee ‘cone’ is evenly saturated. This should be done swiftly to make sure all the coffee extracts evenly.”

Blooming coffee makes the resulting cup more well-rounded and gives it a “fuller” flavour. In comparison, coffee that does not adequately bloom has a weaker, flatter flavour with more acidity. This is because the unreleased carbon dioxide molecules stop the water from fully extracting the aromatic flavour compounds in coffee.

“[You can agitate coffee] by swirling the filter holder or by making a hole in the coffee cone and stirring after you pour the water,” Jens says. “The exact method does not matter that much as long as you are consistent.”

Creating a “well” in the dry coffee bed before pouring will allow for more even saturation, as water has easier and quicker access to the bottom of the grounds in the brewer.

Jens says: “By making it easier to saturate all our coffee grounds with water during the [bloom], particles will extract at a similar rate into the final cup.”

A number of experiments conducted by James Hoffmann on V60 brewing techniques found that swirling during the bloom, rather than stirring, provided better tasting results. His videos recommend that brewers swirl until the slurry looks completely mixed, with no dry clumps.

Scott Rao’s updated manual pour over technique also suggests swirling during the bloom, but also recommends stirring areas where the coffee bed bubbles, as this makes it easier for gases to escape.

Agitation Throughout The Brew

After the bloom, you should continually stir or swirl your slurry to ensure even extraction. This decreases the likelihood of channeling occurring. Channeling is where water finds the path of least resistance through the coffee bed, which results in uneven extraction.

“Pouring gently and consistently is important,” Jens says. “This helps you extract the coffee evenly.

“In the first stage of pouring after the bloom, you can [swirl or stir] to make sure the coffee gets pushed down from the sides of the filter paper.”

The Specialty Coffee Association Brewing Handbook states that “the brewing water must lift and separate each particle” in order to achieve even extraction. Throughout the duration of the brew, the slurry increases in volume as more water is added. As a result, agitation needs to be more forceful as the brew continues.

However, if you’re too forceful, the larger coffee particles – sometimes known as “boulders” – will move towards the sides of the filter due to the centrifugal force that pushes them outwards.

James adds in his video that stirring the slurry in one direction, and then the opposite, helps to remove boulders from the walls of the brewer.

“After swirling, you can gently tap your filter holder onto your container or vessel,” Jens says. “This way you will get the flat bed you’re looking for.” This final step levels the coffee particles in the slurry to produce a flat layer of wet coffee grounds for the last few moments of the brew.

Is Too Much Agitation A Problem?

When increased centrifugal force pushes the boulders outwards, smaller coffee particles move further down into the slurry. This affects extraction in one key way.

Timothy Bruno is a coffee expert and the author of the upcoming book Procaffeination: A Coffee Lovers Dictionary.

“Smaller particles have a greater relative surface area, and are always extracted to a greater degree, resulting in more bitterness,” he says. “Ideally, you want to make certain that the individual particles are properly extracted neither too little nor too much.”

If you are experiencing too many fines in your ground coffee, Timothy recommends adjusting your grinder.

“The amount of fines is a function of the grinding process,” he says. “You will definitely get a less even grind using a blade grinder than you will using a burr grinder.”

This increase of 50 seconds could be the difference between evenly extracted coffee or an over-extracted, bitter cup.

Best Practices With Swirling And Stirring

Andrée highlights the importance of using a sufficient water-to-coffee ratio when agitating the coffee bed, especially during the bloom: “Some people find a 2:1 ratio to be enough, but I personally find this to be insufficient to saturate all grounds.”

James Hoffmann recommends no higher than a 3:1 water to coffee ratio, noting that too much water may prevent enough carbon dioxide from being released.

“Practice your bloom and your pouring techniques,” Andrée says. “This will help you obtain consistent and controlled agitation. If possible, use a sifter.” The more consistent your agitation techniques are, the more you will be able to identify, track, and alter your brewing variables.

Experimenting by adding or removing stages of agitation is the best way to hone extraction when swirling or stirring the coffee bed. If you find that your coffee is under-extracted, then agitate your brew more, but in a controlled manner; stir one more time, for instance, or swirl for just one or two more seconds.

Likewise, if your coffee is over-extracted, then reduce the amount of stirring and spinning in the bloom as well as later phases of brewing.

Andrée also advises considering the role of your grinder in the agitation process: “Improve your grind size distribution [by] ensuring your burrs are properly aligned and sharp,” he tells me.

“Some beans are [more] prone to generating fines; try a grind setting [that is] not too coarse but not too fine, so that your particles are as intact as possible for proper extraction.”

Coarser grinds tend to allow for more agitation with less risk of over-extraction, as fewer fines are produced and the particles are more evenly sized. However, grinding too coarsely will result in under-extracted, watery coffee.

Ultimately, both swirling and stirring pour over filter coffee can result in a great tasting cup. There is no single right or wrong answer; either can bring the best out of your beans.

However, it is always important to exercise caution and make sure your technique evenly extracts the soluble flavours from your ground coffee. By switching your agitation variables, experimenting to find the best technique, and tweaking it in very small increments, you will be in the best possible position to brew great tasting filter coffee.

Enjoyed this? You might also like Everything You Need To Know About Brewing Great Pour Over Filter Coffee

How to Develop and Market Coffee Equipment in 5 Steps
5 Lessons I Learned From 4 AeroPress Champions (& Their Recipes)
Brew Guide: How Does Pulse Pouring Affect Extraction?
How to Make an AeroPress Iced Latte