Perfect Daily Grind > Espresso > Crema: How It’s Formed, What It Tells Us, & How to Learn From It 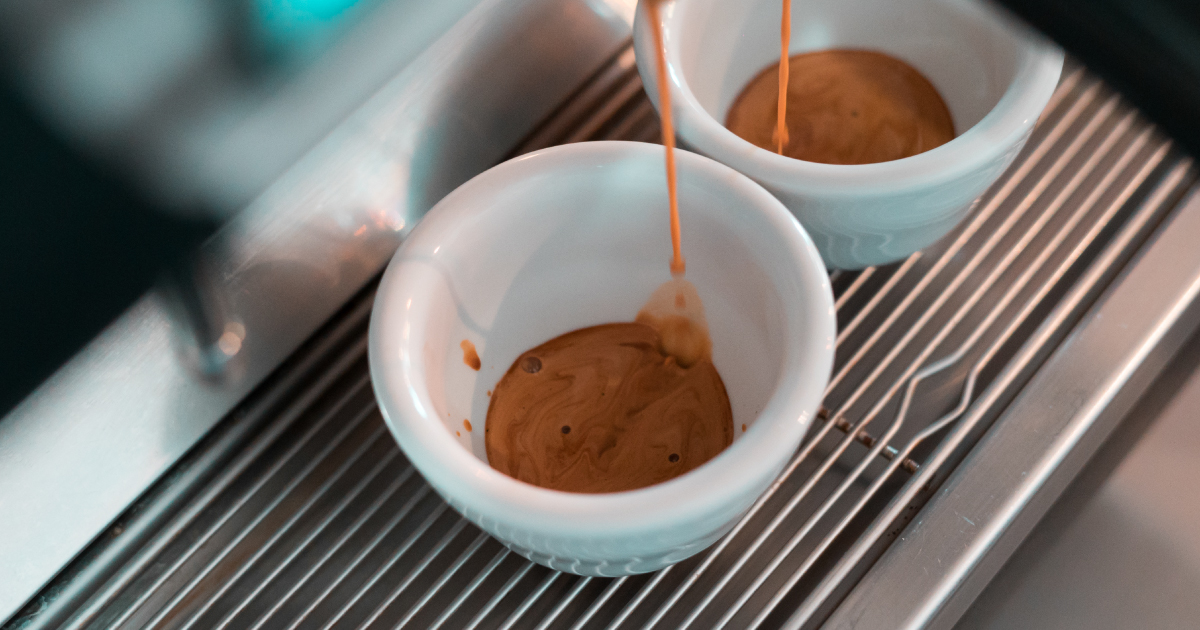 Espresso is a complex beverage characterised by a signature layer of crema. For some, this foam is seen as a fundamental part of the espresso. For others, it’s viewed as an unnecessary byproduct of the extraction process.

To find out why people view it so differently, I reached out to three coffee specialists for their insight. Here’s what they had to say about crema is and what it can tell us.

Crema is formed during espresso extraction. In James Hoffmann’s book, ‘The World Atlas of Coffee’, he explains that when water is under pressure, it dissolves more carbon dioxide, which is a gas in the coffee beans that was created during roasting. He says, “When the brewed liquid gets back to normal atmospheric pressure on its way to the cup, the liquid can no longer hold on to all of the gas so it comes out of solution as innumerable tiny bubbles. These bubbles become trapped in the coffee liquid and appear as a stable foam.”

Britta Folmer, the author of ‘The Craft & Science of Coffee’, emphasises that crema can’t be created without pressure, as it “forces part of the carbon dioxide present in the ground coffee into the water phase from which it is then slowly released taking some solids with it to form a dense and stable crema on top of the beverage… pressure is definitely crucial for crema formation with standard brewing methods.”

Because a high-pressure brewing method such as espresso machine extraction is critical for crema formation, manual brewing methods such as pour over or batch brewing won’t be able to produce crema.

What Does It Tell Us?

Crema can tell baristas a lot about their espresso, and can influence how customers feel when they drink it.

Tim Sturk is the Director of Coffee Education at Cherry Coffee Training in the UK and World Barista Championship judge. For him, crema is also connected to a coffee’s freshness, but isn’t the only factor a coffee can be judged on.

This means that while the foam can indicate freshness, tasting will ultimately be needed to determine the espresso’s overall flavours. Steven Moloney is a two-time Swedish World Barista Championship winner, and agrees that crema can indicate a coffee’s freshness. In an article exploring the relationship between crema and espresso, he revealed that “it doesn’t haven’t any direct correlation to how good the espresso will taste.” He adds that “you can roast a bad coffee to a dark roast degree and get a beautiful, thick, dense crema – and the espresso will still taste bad. Crema can be nice to look at, but it’s important to just concentrate on if the espresso is balanced.”

How do Customers Perceive Crema?

While crema can tell baristas about the freshness of the espresso they’re brewing, research reveals that customers notice the presence of crema and use it to make judgments on an espresso. In 2015, Nespresso and the Nestlé Research Center partnered together to examine how crema impacts a customer’s expected and actual espresso experience. Seven espressos with differing qualities and colours of crema were evaluated by participants. The responses received indicate that the presence of crema creates an expectation of better quality coffee. It also increases their expectations of how smooth and premium a coffee is.

Because crema can create certain expectations in people before they even taste their espresso, its presence will likely impact how they order and enjoy it on a daily basis. Cerianne Burry is Quality Supervisor at Trabocca, and says that customer expectations of crema are difficult for the specialty coffee community to deal with. She explains, “When [customers] say ‘I want a strong cup of coffee’, they don’t actually mean strength in the way that [the] specialty coffee [industry] understands strength. Usually, what they mean is something that’s a bit more bitter or full bodied.”

She adds that “it’s very probable that a longer shot of espresso, which has a lighter crema,… will be higher in strength when you look at the extraction or at the caffeine level.” Despite this, she notes that the extraction process will require nuance. “[An espresso] can have higher extraction yields, but still not taste stronger. However it can also be weaker if the grind is much more coarse. There’s so much to play with, that can influence how the crema looks, and it does not always correspond with what you’d expect from a flavour or extraction in the cup profile.”

It’s important to get to know your customers espresso preferences to understand what they associate with crema. Cerianne thinks that “it’s just part of knowing who your customer is and when you can offer them something that they’re not used to or show them that an espresso that looks different [can be]… tastier than what they expected. How to do that is… very different per company, per customer”.

Crema usually tastes bitter and can be more bitter than the espresso itself. Stathis Koremtas is a three-time Greek Brewers Cup champion and two-time World Brewers Cup finalist. He mentions that “if you… separate the crema from the coffee and drink the coffee, it’s going to be sweeter”. Because of crema’s intense flavour, there are different opinions on dealing with it. Some recommend skimming it off the espresso, while others recommend stirring it in.

Cerianne’s opinion is that the crema should be stirred into the espresso. “‘[If] you drink just the crema… It’s quite bitter. So it’s always important when you drink an espresso [to stir the crema in]… because it comes out of the machine layered and you want to mix these layers together…[You want to] make sure you’re not just tasting the crema”.

Tim feels the same way. “I would stir my espresso because I want to mix the dissolved solubles; you have such a high concentration of these solubles in a small space. It’s very easy for them to separate so stirring them mixes all the flavours, and that’s including the flavours of the crema… I think bitterness is part of the overall flavour of espresso and coffee in general. We want that bitterness, but don’t want it in isolation.”

Not everyone shares this sentiment. Ever Meister is a former barista and author of ‘New York City Coffee: A Caffeinated History’. In an article on the topic, she says that in theory, skimming the crema off an espresso could cut some of its ashy bitterness and mouth-coating foam while cleaning up its texture on the drinker’s tongue. However she adds that “the resulting cup minus the crema often has a noticeably sweeter taste and a lighter body. But if you wanted something that went down easy, you’d be drinking a regular coffee”.

This bitterness can help balance the other flavours present in the espresso. For Tim, “the Holy Grail is looking for that balance of acidity, sweetness, and bitterness working together in the cup. If you have too much of either of these elements the espresso is unbalanced”. He adds that an espresso “can be bitter, as long as the bitter is balanced with… acidity, and the sweetness… We crave bitterness as humans, because it’s contrast. We just don’t want that bitterness to be dominant.”

Preferences regarding crema are individual, which is why it’s important to understand how different variables will impact how much or how little crema is formed, in order to create the type of crema that your customers respond to. Variables including timing, temperature, and coffee variety can make crema coarser or thinner, darker or lighter, and creamier or bubblier.

When extracting espresso, the temperature and pressure present can impact the type of crema you create. High temperatures increase extraction and pressure, while low temperatures decrease both. This means that if your crema is light, thin, and disappears quickly, your espresso may have been under-extracted This is usually caused by using coffee that’s too coarsely ground or too little coffee being extracted. Less common causes for thin crema can include if the machine’s pressure is too low, the coffee is too old, or the water is too cold.

If you are an espresso lover, you’ll have an opinion about the importance of crema. Whether you like it dark or light or thick or thin, there’s no disputing the role it plays in espresso extraction.

Understanding how crema is formed and what it can look like can help you extract espresso to the best of your ability and create the perfect espresso for each customer that you serve.

Enjoyed this? Then Read How to Roast For Cupping Purposes