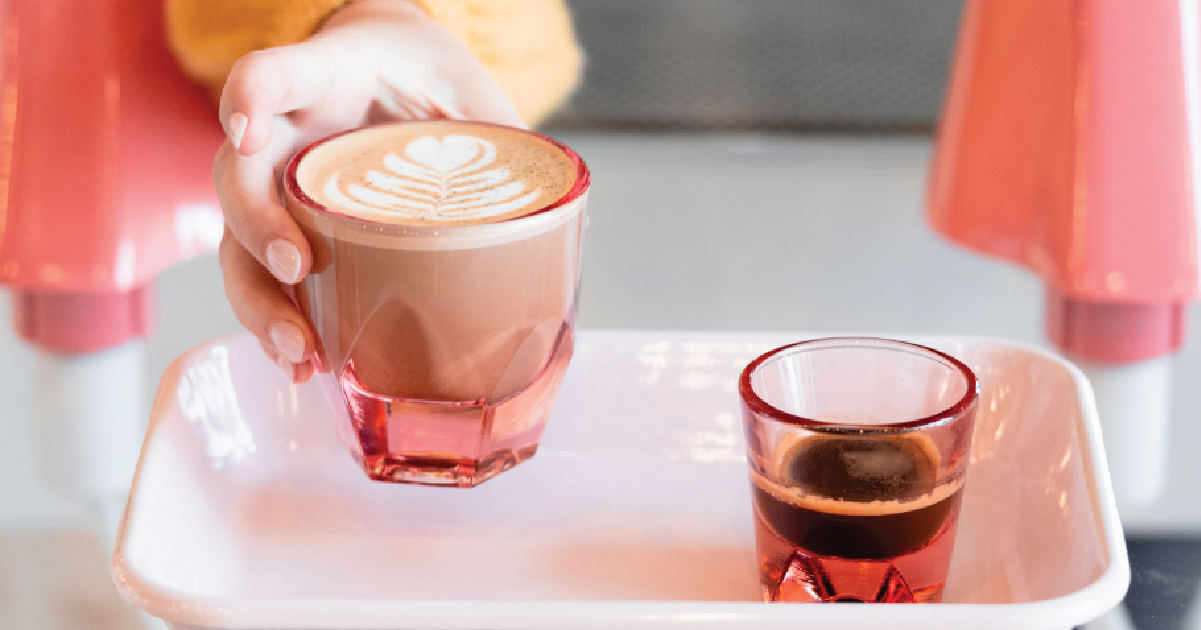 A few years ago, you would struggle to find any coffee shops offering oat milk as a non-dairy alternative. Yet today, oat milk is everywhere in the coffee scene.

In 2017, a mere 10 coffee shops were stocking Oatly in the United States, one of the many oat milk brands that you can purchase. Fast forward to 2019 and that number has shot up to around 3,500 coffee shops in the country.

This change in behaviour is astonishing. We’re going to explore this change in consumer behaviour. I spoke with Toby Weedon, Barista Market Developer for Oatly, and Eric Grimm, Catering Manager for Joe Coffee Company, to unravel why this change has happened, what makes oat milk different to other milks, and how can baristas work with it to achieve its full potential.

What Is Oat Milk?

This well-balanced, slightly sweet, and smooth milk alternative has rocked the coffee scene. But how is oat milk made?

The production of commercial oat milk involves harvesting and transporting oats to a manufacturing plant where they are then stored in large sterile silos. The oats are mixed with water and then milled or blended down to create a thick liquid.

Enzymes are added to this slurry to help speed up the breaking down of the carbohydrates in the oats, which assists in naturally sweetening the product.

The mixture will then be strained to remove any hard fibres, leaving a smooth, thick liquid that is essentially oat milk. It can be flavoured or fortified with vitamins and minerals in order to increase its nutritional value.

It’s then pasteurised, which involves applying mild heat to the liquid. This ensures that the product is safe as well as providing it with a longer shelf life. The oat milk can then be stored again in sterile silos before it is packaged and dispatched for customer use.

The Recent Emergence of Oat Milk

Believe it or not, oat milk has been sold commercially for over 20 years. Pacific Foods began selling their oat milk in the US in 1996, and Oatly also began manufacturing oat-based beverages back in the 1990s in Sweden. So, why has it taken so long for consumers to catch on to this trend?

There have been changes in consumer behaviour over the past few decades. Increasing levels of veganism correlate to higher interest in and consumption of non-dairy milks, including oat milk. Worldwide, veganism has been on the rise, fuelled by growing interests in the environment and healthy lifestyles. In the UK, in the past decade,  the number of vegans increased from 150,000 to 540,000. With schemes like Veganuary, which encourage people to try a vegan diet for a month, we could see even more consumers turn to alternative milk options.

Similarly, one of the most significant factors in oat milk’s surge in popularity is a general increased awareness of environmental and sustainable issues. “There’s no denying the recent surge in popularity, which we believe reflects the global mood change in people wanting to make a difference to the planet,” Toby, based in London, says.

These changes in behaviour are clear. Sales of oat milk in the UK grew by 71% between 2017 and 2019, whilst in the US, retail sales of oat milk increased to US $29 million in 2019. Last year, Califia Farms and Silk all began creating their own oat milk in order to compete with already existing brands. This year, Starbucks, Peet’s Coffee, and Dunkin Donuts all announced that they would start including oat milk on their menus.

The environmental factors surrounding oat milk are part of the reason why it has become so popular. From beginning to end, the whole process of manufacturing oat milk has a low environmental impact and is a sustainable system.

There are a number of factors which are considered when assessing the environmental impact of food and drink. First is land usage which describes how much space is needed to produce certain foods. Land is required not only to farm food to eat, but for forestry, where trees produce oxygen and absorb carbon dioxide (CO2). Using less space for farming animals and crops can provide more space for valuable forestry. Water usage represents how much water, a finite and scarce resource, is needed for growing the crop. The release of CO2is also measured, a greenhouse gas which heats up the earth’s atmosphere.

Oat Milk vs. Dairy Milk: Which Is Better For The Environment?

There is a drastic difference in environmental repercussions between oat milk and cow’s milk. A 200 ml glass of cow’s milk releases just over 0.6 kg of carbon emissions, needs over 1.5 square miles of land, and around 120 litres of water in order to be produced.

Dairy milk requires ten times the amount of land that oat milk needs, and is impacting the environment more than any other non-dairy alternative. Onyx Coffee Lab, a roastery and coffee shop who’ve opened a new location in Bentonville, Arkansas US, have opted to use oat milk as the standard in all drinks unless customers specifically request dairy.

“We aren’t against dairy, but we wanted customers and people visiting the… space to experience our coffee in a new way, and embracing a $1 upcharge for dairy, a carbon tax if you will, seemed like a unique way to ask people to think about what their choices are. We also love the concept of plant-based beverages becoming more of the norm and less of an alternative,” owner Andrea Allen tells me.

Oat Milk vs. Other Alternative Milks

Soy milk has a similar impact on the environment to oat milk. Although it emits around 0.03 kg more CO2 than oat, it needs around half the amount of water, and just a little less land is needed to grow the crops.

Toby explains why Oatly chose to use oats and not any other non-dairy beverage ingredient: “Oats were chosen because of their positive environmental credentials, as well as their strong nutritional benefits.” Toby believes that creating delicious, oat-based equivalents to dairy products such as milk, yoghurt or ice cream, will “make it easier for people to consume the products they love that have a lower environmental impact.”

All alternative milk brings something different to the table, from their flavour to how they feel to drink.

First, oat milk is accessible to a lot of people who can’t drink other types of milk. It’s free from most allergens (if the oats used are declared gluten-free) such as lactose, soya, and nuts. It is usually fortified with vitamins and minerals, and also contains a lot of soluble fibre that can benefit our digestive systems.

Oat milk tends to have a thick texture and a creamy mouthfeel that some consider milk-like in comparison to other alternative milk. It’s generally slightly sweet, but without a sugary taste. However, this depends on which brand of oat milk you purchase. Some contain more added sugars than others, and some also have thinner consistencies.

“During the formulation process, our team in Sweden worked hard to try and replicate the performance and flavour profile of dairy, in order to remove that barrier to entry to plant-milks,” Toby explains. “Whilst Oatly is not meant to be a carbon copy of cow’s milk, it does follow the same principles of being rich, creamy, and slightly sweet.”

In comparison with almond milk, oat milk generally has a thicker texture and a more nuanced flavour, but it can contain significantly more sugars and calories. Soy milk has a similar creamy texture to oat milk and benefits from much higher protein levels, almost as much as dairy milk. Proteins make up part of the chemical composition of milk, being the component which affects the ability to heat milk. The higher the protein levels, the easier it should be to heat the milk. Choosing which plant-based milk to have with your coffee is a preferential choice based on taste, texture, and health benefits.

“Oat milk interacts with coffee much in the way cow’s milk does. It can balance and bring sweetness that plays well with some of the brighter characteristics of complex, fruity coffees given the right ratio of oat milk to coffee,” Eric tells me.

Barista edition blends of oat milk are typically better suited for steaming and pouring latte art. “Our Barista Edition… is the product with the highest fat content in our range, and it was the first to include an acidity regulator,” Toby tells me.

How To Use Oat Milk

“Oat milks that are specifically formulated for café use (usually noted as Barista Series on cartons) steam similarly to regular milk and produce comparable latte art,” Eric tells me.

The steam arm can be placed in the same position in the pitcher as when cow’s milk is being steamed, and the milk can also be steamed to the same temperature range of around 55᠆65°C/131᠆149°F. Incorporate more air into oat milk than dairy milk in order to stabilise the foam as much as possible. This will help to create a smoother texture that retains its form much better and for longer.

Oat milk will heat up faster than regular cow’s milk so using a thermometer to pay more attention to the rate of increase in temperature may help.

After steaming, let the oat milk sit for up to 40 seconds before pouring so that the texture of the drink will be more balanced.

Baristas seem to find that you need to be firmer and faster with oat milk when creating latte art so that it retains its shape more. By doing so, you can have more control over your pouring design.

Whether you’re curious to test the taste of an oat milk cappuccino, or are considering your dietary requirements and environmental impacts, this non-dairy milk substitute may be an interesting option for you.

Next time you visit your local coffee shop, make sure to try one out and see how it compares to your usual alternative or dairy milk order.

Enjoyed this? Check out Which Is The Best Non-Dairy Milk For Specialty Coffee?