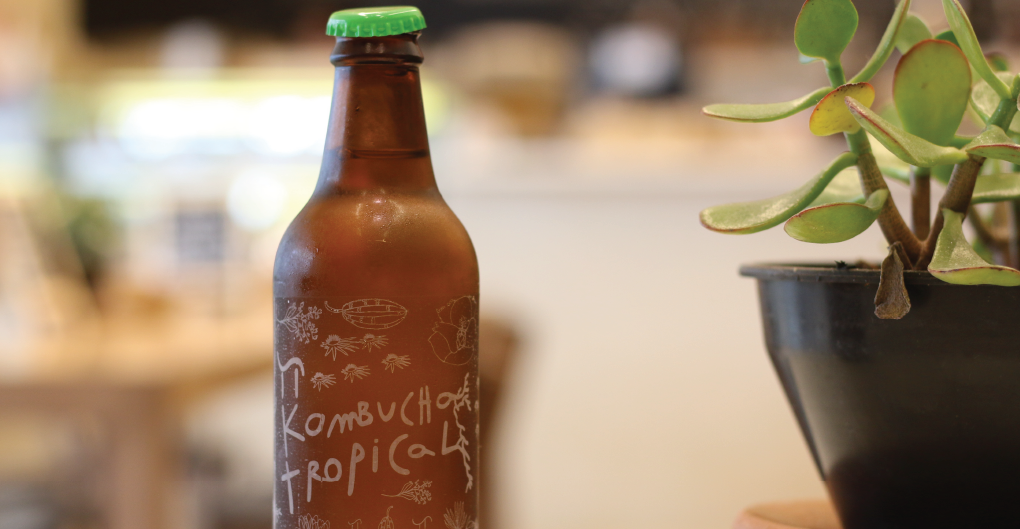 If you’ve visited a coffee shop recently or browsed the drinks aisle of your local supermarket, there’s a good chance you’ll have seen bottles of a chilled, tea-based drink for sale called kombucha.

While it might be a relative newcomer to the beverage sector, this fermented beverage actually dates back to ancient China and has been enjoyed around the world for centuries. Its current popularity could be due to several factors, including its novelty, purported health benefits, and unique flavour.

Here’s what kombucha has to offer and how your coffee shop can add it to its menu.

Cold-brewed tea (a base for kombucha), served in a glass. Credit: Neil Soque

A Short History of Kombucha

Kombucha is said to have been invented in Northeast China since 220 B.C, with trade bringing it to Russia in the early 19th century. Here it was popular for several decades, as carbonated beverages like Coke and Pepsi were unavailable at the time. It eventually entered Northern Europe, but its growth was hampered by World War II’s sugar and tea rationing.

In the USA, a similar drink called shrubs or switchels was enjoyed in the 17th and 18th century. Made with vinegar, it was thought to have cooling properties, with fermentation preserving it without refrigeration. Kombucha rose to fame in the nineties thanks to homebrewers, partly due to the belief that it could cure medical conditions. According to Forbes, the first person to produce it for the American marketplace was GT Dave, who founded GT’s Kombucha in 1995.

In the early 2000s, a brief production occurred over concerns retail kombucha was generating too much alcohol during fermentation, as some producers weren’t adhering to legally prescribed alcohol amounts. This led to updated and more stringent guidelines being created, and the creation of Kombucha Brewers International, an association for commercial brewers aimed at educating consumers and retailers and promoting industry ethics and labelling standards.

Tea being poured into a serving container. Credit: Neil Soque

Currently, kombucha’s popularity is growing worldwide, with the USA leading demand, followed by the European, Middle East, and African region, and then the Asia-Pacific region. Growth is slightly slower in Europe, possibly due to the EU’s regulatory environment and probiotic legislation, and the fact that the kombucha fermentation and manufacturing is long and intensive, requiring significant investment.

Currently, four brands make up over 85% of dollar sales via conventional channels: GT’s Kombucha, KeVita, Health-Ade, and Humm. Research indicates that most of these sales take place at health, supermarket, or convenience stores. However, some coffee shop chains are also introducing it to their menu. Starbucks introduced kombucha to its menus in 2018, made with teas including black tea, and green tea, and including flavours like mango and ginger.

Coffee shops looking to possibly brew their own Kombucha or purchase a ready-made version to add to their menus will need to take several factors into consideration, including the following.

It Appeals to The Health-Conscious

Consumers are increasingly turning towards beverages that are more functional, and suitable for consumption at any occasion. As kombucha’s natural fermentation process removes an estimated two-thirds of its caffeine and its alcohol amounts are minimal, it fits into this category.

Coffee shops who have introduced this to their menu have found that it appeals to customers. Elisa Welchez-Lazarus is the Managing Partner of Welchez Café in Honduras, which is a roastery and café with two locations in the area. She says, “We have kombucha and we decided to add it to our menu because we felt like it is a great product for health-conscious customers that are looking for a good range of options when they go out.” She adds that she gets hers from a local supplier.

While many of kombucha’s more dramatic health benefits have been exaggerated by the media, it’s still a healthier option in comparison to some drinks. I spoke to Emma Thackray, who is the co-owner of Hip Pop in England, a business that brews their own kombucha.

She says that kombucha is a healthier soft drink, and is a far better choice than mass-market soft drinks. She adds that as it’s made from tea, it has all the benefits that tea provides and that the process of fermentation also produces antioxidants. She says “people are looking for drinks that are lower in sugar – [the] fermentation process naturally reduces the amount of sugar present in the drink.”

Cascara being brewed in a cafetiere. Credit: Mayorga Organics

Specialty coffee shops offer a range of coffees from various origins, in addition to other beverages. To appreciate these coffees, customers often have to learn about how terroir, processing methods, brew methods, and roast profiles can impact a drink’s taste. As Emma says, “Your customers drink your coffee because they care about flavour, mouthfeel, and aroma – and this is critical for kombucha too”.

Melaleuca is an Italian coffee shop, and Head Barista Johnsy La Jessica Sartiani says that they offer customers similar fermented products like probiotic soda, ginger beer, and lemonade and that it helps them to “better control the quality and flavours (and depth of flavours) we want to offer … and we reduce… plastic waste”.

There are a few similarities between kombucha and drinks such as craft beer, nitro coffee, and cold brew. It can easily be stored and served in a keg storage system and dispensed on tap to reduce packaging and product waste and preserve freshness. It can also allow for customised carbonation so that each glass is as fizzy as the customer wants it to be.

Kombucha can be served by itself, or even added to other drinks. Carlos De La Torre is a Green Buyer and Head Roaster at Café con Jiribilla and is also in charge of Quality Control and Training at Café Avellaneda, both in Mexico City. He’s also won Mexican National Titles at Cup Tasters, twice at the Brewers Cup, twice at the Barista Championships, and recently was named Los Angeles’ Coffee Masters Champion.

He says, “It works fine with coffee mocktails, adding a buzzy sensation, and unlocks… creativity and teaches patience [in] baristas. Plus making it is a lot of fun!” Emma says “it’s a great addition to your menu, particularly in spring and summer. If you talk to [a] kombucha brewery… find out how they brew their [kombucha] and stick to companies using natural ingredients, then your customers are going to love it!”

Kombucha can make a profitable addition to your coffee shop menu.

It Can Help Reduce Coffee Waste

While typically kombucha is typically brewed using black tea, an increasing number of coffee shops are brewing it using cascara tea, which is tea brewed from the coffee cherry skin pulp that is typically discarded after processing. Brendan Pont is the Café Manager at Saffron Coffee Company in Brisbane, Australia, which offers kombucha brewed with cascara.

Brendan says that his customers love it and that those that visit the store like it too. In addition, it helps him to explain the cherry to cup process to them. He says “usually, kombucha is made  [with] black tea, but because we’re a coffee company that also sells cascara, we decided to use cascara instead.”

Patara Taracena is a nutrition and health professional and adds that cascara tea offers more antioxidants and is also better for the environment. He says, “Kombucha may help with the digestion process after you drink it and keeps a healthy digestive bacteria. But that’s it. Cascara, on the other hand, has antioxidants and also aids digestive processes.”

Knowing more about kombucha and what it offers customers will ensure you’re better placed to decide whether or not to add it to your coffee shop menu. However, you’ll need to get in touch with a supplier or producer to truly understand and experience its production process for yourself.

As Emma says, “talk to [a] kombucha company and find out how they brew their kombucha –

the best kombucha companies are not soft drink producers, they are craft breweries, and should brew their kombucha with the same amount of care, love, and attention as a craft beer brewer or winemaker. Go visit the brewery!”

Enjoyed this? Then Read How to Create a Coffee Shop Food Menu That Minimises Waste

Why You Should Organise a Coffee Event – And How to Do It
Coffee Marketing: How to Achieve Social Media Success
4 Tips for Running a Coffee Business With Your Partner
Five Things No One Tells You About Opening a Third Wave Coffee Shop