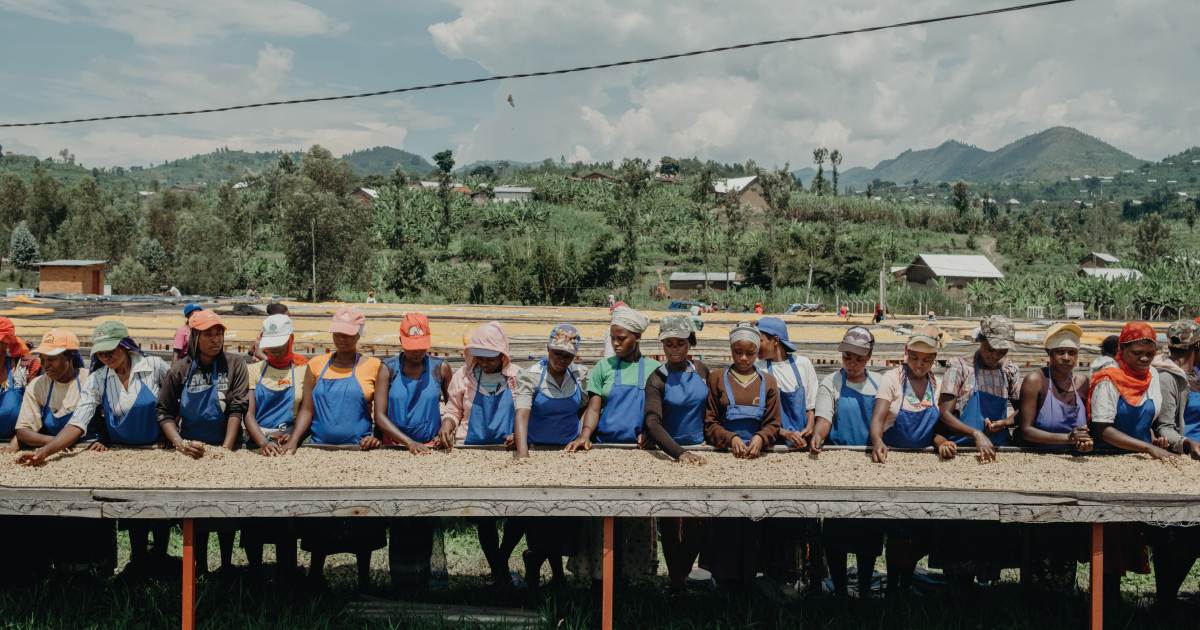 Like many African coffee-producing nations, Rwanda has reached a critical point in its coffee production due to the age of its farmers. A combination of factors, including the coffee price crisis, mass urban migration, and changing attitudes have created a coffee production workforce sorely lacking the involvement of younger generations.

The United Nations Food and Agricultural Organisation (FAO) states that the average age of an African farmer is 60, despite 60% of the continent’s population being under 24. In Rwanda, this means that of the 400,000 smallholder farmers responsible for coffee production, a significant percentage might soon be too old to continue farming the crop.

To address this potential crisis, steps must be taken to solve the issues keeping young Rwandans away from coffee production. Here’s what some of those reasons are, and what efforts are being made to overcome them.

A coffee farmer carries beans from her farm to the Cocagi Coffee Washing Station in Rwanda. Credit: Laura Mulkerne

Rwanda’s coffee industry has come a long way since it first drove the country’s economy in the 1930s. Since then, it has gone through independence, the world’s coffee price drop crisis, as well as genocide. This left the once-thriving industry in bad shape by the year 2000.

In the past few years, Rwanda’s economy has grown, with a 23% increase in investments taking place last year to the value of $2.5 billion. This is expected to create 35 715 jobs, with a target of 200 000 jobs and a 10% investment increase set for the next year. Currently, Rwanda is one of the world’s fastest-growing economies and as of 2018, its labour force participation was 52.4%.

While more jobs are being created by the government, they’re not likely to be found in agriculture. One of the country’s goals as part of their Vision 2020 and Economic Development and Poverty Reduction Strategy has been to decrease the population dependent on low-productive agricultural activities by 50%, by creating 2.2 million jobs. They hope this will reduce underemployment and unemployment in rural and urban youth.

Currently, a large percentage of Rwandan youth are underemployed, which means they work a limited amount of hours a week, but wish to work more. A large percentage of this group work without pay on family farms or as waged farmhands for independent farmers. With rural areas offering jobs like these, many are moving to the city to find work.

Research suggests that they are finding work in these urban areas. According to a 2018 World Bank report on Leveraging Urbanisation for Rwanda’s Economic Transformation, there’s a link between urban population density and non-farm job creation in Greater Kigali and the cores of the six secondary cities. In addition, the report estimates that the effect of urban population density on poverty reduction is strong, with a decrease in density associated with a percent drop in the rate of moderate poverty in one recorded instance.

It’s apparent that employment opportunities are attracting younger Rwandans towards the city. However, this doesn’t tell us what working in coffee production is like, and why it’s driving them away. For insight into this, I spoke to Liza Imbonabake, who is an Associate and Business Trainer at Challenges Worldwide, a management consultancy company in Kigali’s development sector.

She tells me, “What mainly pushes the youth away is the prices. To them, the market is really complicated – they see ten intermediaries between them and the buyer, so they don’t see the point”. This is a common sentiment amongst coffee producers worldwide, who often take on most of the risk involved in coffee production, but end up with the smallest profit.

A conversation with a staff member at the Kopakama Cooperative in Rwanda reinforces this. They tell me that on average, a farmer produces one tonne of coffee in a three-month harvesting season, valued at 220 000 Rwandan Francs, or 240 dollars. Currently, the average living wage for Rwandan families is 219 000 Rwandan Francs. So, in three months, producers earn just over a third of what the average Rwandan earns in a month.

Liza tells me that this is part of the reason that the younger generation isn’t interested in taking up coffee farming. She says that if they do work in coffee, they end up working on washing stations. “They do the casual labour – they collect cherries or do the transportation services from farm to washing station, but not the actual farming”. This way, you’re guaranteed a wage. It may be low, but Liza says that at least this way, you’re dependent on the weather.

A farmer stands by her coffee trees in Kopakaki, Rwanda. Credit: Laura Mulkerne

A Lack of Motivation

While facts and figures can shape the conditions that are driving the youth away from coffee production, it does little to tell you how this group views this industry. To find out more about how young Rwandans feel about coffee production, I spoke to Smayah Uwajeneza.

Smayah is a Rwandan coffee roaster working for Sustainable Harvest, an international specialty coffee importer that fosters direct relationships between buyers and producers. She’s also a recipient of the 2018-2020 Specialty Coffee Association LEAD Scholarship, which is a career development and mentorship initiative aimed at increasing leadership diversity in the global coffee community.

Smayah works directly with female farmers and spends a significant amount of time at washing stations, where she facilitates workshops on subjects such as improved farming methods in the face of climate change, and financial literacy training. When talking about youth turning away from coffee production, she asks me, “Can you blame them?”

She’s witnessed firsthand the amount of hard work and labour that goes into coffee production, telling me that she once saw “a pregnant woman, carrying a big basin on her head full of cherries and a baby strapped to her back, walking for two hours to get down to the washing station… It’s the rainy season, there’s no track for her to [walk on], and it’s slippery. If you have five kilograms on your head with the water coming in, it’s going to [feel] more like seven kilograms”.

She continues, saying “If you talk to a child from this family, how is she ever going to be motivated to join the work that her mother is doing? Sometimes they don’t get lunch, they don’t get dinner, and yet the mother is working and waiting for coffee for sometimes three or four years, and they’re only earning cents that … is gone in hours. How are you going to be motivated to stay? Never.”

Smayah’s account suggests that coffee farming is seen as a high risk and low reward endeavour by youth. After all, producing coffee requires constant attention to achieve a single harvest – and that’s without taking into consideration issues such as the increased frequency and duration of droughts, floods, landslides, erosion, and plant disease being brought about by changing weather patterns in Rwanda. As one farmer in Huye, Rwanda, told me, “You can’t put it into hours, you always have to be there. You live in your trees”.

What Changes Are Being Made?

While the Rwandan coffee industry is undergoing changes to keep up coffee production, many of these are targeted at improving production in general, and not specifically at the youth.

After important infrastructure was lost during the genocide, the Rwandan government realised this need to be replaced in order for coffee production to continue successfully, and that replacing it would require improving technology and production, as well as skill and quality. The 2002 National Coffee Strategy was formed to accomplish this, as well as to position Rwanda as a speciality coffee producing country.

Since then, various local and international organisations have gotten involved in improving farmer capacity and productivity. Smayah tells me that part of Sustainable Harvest’s programme includes offering educational workshops and classes on trade and market prices, as well as networking and connecting roasters to coffee producers.

Another organisation providing capacity building is Challenges Worldwide, an international development charity that builds enterprises in growing economies. In 2017, they launched a five year Coffee Market Building for Peace and Prosperity project with eight coffee cooperatives in western and southern Rwanda.

The project aims to improve farmers’ business models so that they generate more capital and become more sustainable. It will also safeguard them against climate change by helping them reduce their operating costs and carbon emissions by using renewable energy for coffee washing.

The goal of training is for young and old to be being trained, and for those that are trained to pass down their skills to their successors. However, Liza tells me that in her experience, the majority of those in attendance are elders, and expresses further doubt that these elders will pass their training on to younger generations – halting the spread of knowledge even further.

An initiative that might have more success with younger generations is the Rwanda Youth in Agribusiness Forum, which is an online forum created to “change the old mindset among the youth … while orienting youth to reach out to other farming groups to raise awareness on the practice of business-oriented agriculture”. One of their areas of interest is coffee production.

With mobile phones allowing youth and low-income earners access to the internet, this forum could be accessed more easily than training sessions held in geographic locations. Currently, the forum has over 12 000 members, and promises all who join access to global opportunities designed for youth in agribusiness, business development support, mentoring and coaching, capacity building programs, and more.

Another initiative that might also achieve success is Sustainable Growers. This group has recognised that women are often excluded from benefiting from coffee production. They offer Rwandan women access to a year-long professional coffee farming and market access training program, where they are trained in best agricultural practices in coffee, home roasting, gender, and market access activities.

While women in Rwanda make up a significant percentage of the country’s workers, they are less likely to have wage employment than men, and are often limited to performing unpaid household labour. By involving this group in coffee production, this could change.

An employee at Cocagi Coffee Washing Station sorts through coffee beans, ready to be sent off as samples. Credit: Laura Mulkerne

It’s evident that there’s a long way to go in order to get Rwandan youth involved in coffee production again, and that this might not be as simple to accomplish as it seems.

It will require the current coffee-producing population to work with their successors, and for organisations to reach the younger generation in a manner that suits them, and not the other way around.

However, with recognition of the problem, solutions can be created which will allow the country to continue to produce the specialty coffee it’s famous for, for years to come.

Enjoyed this? Then Read What a Coffee Producer Thinks When Harvest Begins

Martha is a contributor based in Rwanda.

More Than Kopi Luwak: Specialty Coffee in Indonesia
How Much Does It Cost a Farmer to Plant a Basic Plot?
What Do Coffees From Around The World Taste Like – & Why?
Roaster Life: 3 Steps to Finding a Specialty Coffee Producer in the Caribbean