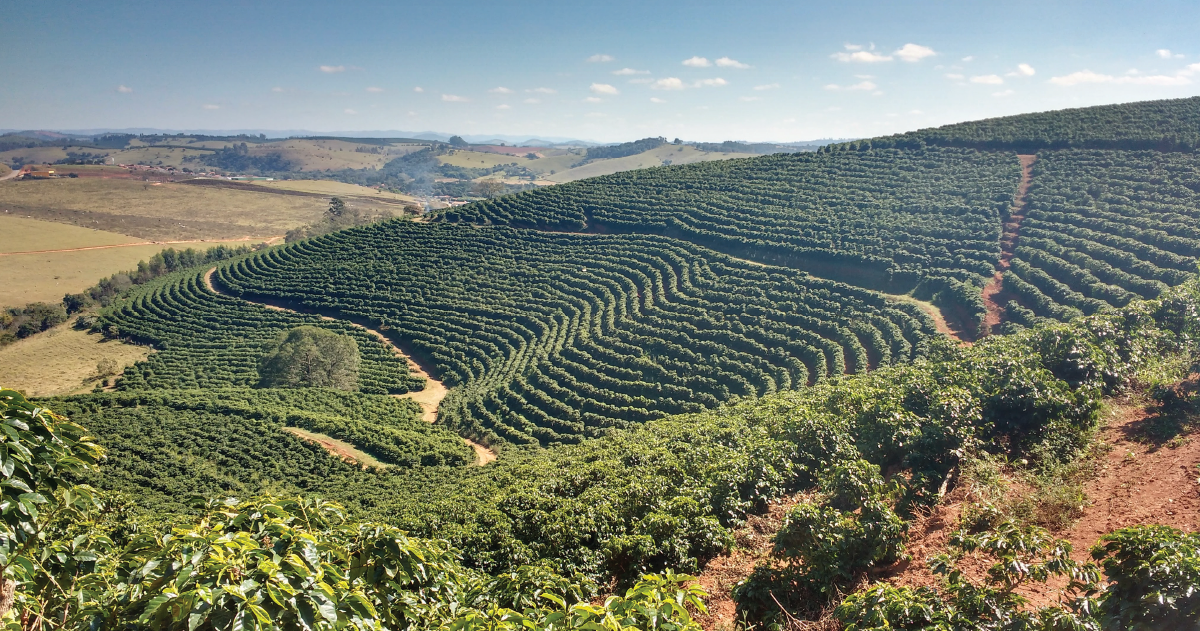 Brazil dominates the coffee industry. It’s responsible for roughly a third of the coffee we drink. One single state in Brazil, Minas Gerais, produces more coffee than any other country in the world. It’s also the world’s biggest consumer of coffee.

And this coffee giant is also strongly associated with certain coffee varieties, some of which are rarely found in other origins. Its genetic research has also influenced the development of varieties in other countries.

From the high-yielding Mundo Novo to the sweet and delicious Pacamara, Brazil has played a pivotal role in the development of several cultivars. Let’s explore how this happened and some of the country’s most important varieties.

Why Are Coffee Varieties Important?

There is now a vast array of coffee varieties to choose from. But, what are they? Why are they important?

Coffee is a food, and as with all foods, there are different varieties. For example, when you go to the supermarket to pick up some apples, you might find Granny Smith, Pink Lady, or maybe Golden Delicious. They’re all apples, but each variety differs from taste to texture and will grow in different ways.

For coffee producers, picking coffee varieties is integral to farm management and can determine the success of a harvest. Firstly, varieties will produce different quality coffee in varying levels of yield, which can directly affect the income of a farmer. Secondly, varieties will flourish in certain environments, so it’s important to coffee production that producers select the best crop for their farm. Varieties also have different susceptibility to pests and diseases, which will play an important role in selecting a coffee variety, especially as these issues can devastate harvests.

The development of these varieties has provided a wider range of options for both producers and consumers, which for both parties, has very helpful benefits.

Coffee is not a native plant to Brazil. The first recorded history of Arabica in Brazil dates back to 1727 when Francisco M. Palheta was believed to have brought plants and seeds to the north of Brazil from neighboring French Guiana.

This was the Typica variety, now known for its low productivity and susceptibility to pests and diseases. Despite this, the genetics of this variety is the basis of most Arabica coffee cultivars around the world today. Typica is also still widely cultivated in countries such as Peru, the Dominican Republic, and Jamaica.

The coffee landed in 1727, and there would be a long wait until any kind of genetic improvement could be made to the Typica variety in Brazil.

The creation of the Agronomic Institute of Campinas (IAC) in 1874 was the first step in the development of Brazilian coffee varieties, founded to support the research of coffee crops. In 1928, following significant development in genetics research in the late 19th and early 20th Century, the genetics department was created at the IAC. This team included pioneers of coffee plant study, Carlos A. Krug and Alcides de Carvalho, who were responsible for many new coffee variety cultivations in Brazil and worldwide.

A cupping table at a farm in the Mountains of Espirito Santo, Brazil. Credit: Ivan Laranjeira Petrich

Formation of The Brazilian Genetic Bank

The next step in coffee variety development came in 1932. Professor C. A Krug from the IAC was sent to Cornell University in the USA to specialize in genetics, cytogenetics, and improvements of plants. That same year, he returned to the IAC and set up the genetic bank, with a focus on the preservation, genetics, and breeding of different plants and species, including coffee.

The first collections at the genetic bank were variations or mutations of Arabica found in Brazilian territory. Over the coming decades, the bank received more coffee type samples. These included plants and species collected by the agronomist Edmundo N. de Andrade during his trip to Indonesia and a coffee collection from the 1964‒65 Food and Agriculture Organization (FAO) expedition to Ethiopia.

The genetic bank is an incredibly valuable resource and its wide range of plants and species is a fundamental resource for the development of new coffee varieties which are more adapted to future conditions and consumption trends.

Brazil has led the development of a long list of coffee varieties. We’ll focus on some of the most iconic varieties that you might have seen around.

The Maragogipe variety was discovered in the city of Maragogipe, Bahia, in 1870, and developed as a result of a natural mutation of the Typica variety.

It’s distinguishable by its large fruits, as well as its high quality. This attracted the attention of coffee buyers in Rio de Janeiro and Europe. And in 1883, the Ministry of Agriculture purchased 500 kg of seeds and donated them and farming materials to Brazilian farmers. Despite this, its popularity didn’t last due to its low productivity, which proved a problem on commodity farms.

Although the variety is no longer as relevant in Brazil as it used to be, it played an important role in the development of the Pacamara variety in 1958 by the Salvadoran Institute of Coffee Research (ISIC).

Sweet, delicate-bodied, and complex, Yellow Bourbon has a lot to offer. This variety can be traced back to Pederneiras, São Paulo in 1930. There are two theories behind the origin of Yellow Bourbon. The first is that the variety had come from the natural breeding of Botucatu’s Yellow and Red Bourbon, and the second that the plant could be a natural mutation of Red Bourbon.

It was one of the first to be recognized for its outstanding cup, in addition to having significantly higher production than other varieties. It quickly became popular in Brazil, with production tripling from 1949 to 1951. However, there was a decline in Yellow Bourbon in the years that followed. This was due to more productive and less susceptible coffee varieties being released at that time.

In recent years, the demand for specialty coffee has brought complex, high-quality coffee into fashion. In 2005, the IAC picked up studies of Yellow Bourbon again, with research into strains with higher yields. In the 2017 Cup of Excellence Brazil, samples of Yellow Bourbon were cupped at 92.33 and sold for US $126.00/lb at auction, 100 times the C price on that date.

This variety has bright acidity and is commonly grown throughout Colombia, Costa Rica, and Nicaragua. It’s believed to have been discovered on a plantation in Lessa, a village in Minas Gerais between 1915 and 1918. Research suggests that Caturra is a natural mutation of the Bourbon variety.

The IAC started making selections of Caturra in 1937. What made Caturra an interesting variety and caught the attention of researchers was its small size, which is called dwarfism. This explains the name Caturra, which means “small” in the indigenous language Guarani.

Small plants are often seen as an advantage; they allow farmers to increase the number of plants in the same space, compared to larger plants. Because of this, it has been used in the development of other coffee varieties as well as playing a role in the high-density coffee cultivation.

A sweet cup with low acidity, this coffee variety is still widely grown in Brazil. The name Mundo Novo translates to “New World” in Portuguese.

The history of Mundo Novo can be traced back to 1896 when Typica seeds from Indonesia were planted in Jaú, São Paulo. It is a result of natural breeding between the Typica variety and Bourbon variety found in Jaú, and is characterized by its large plant size. It wasn’t until 1943 when the IAC was informed of a plantation near Mundo Novo, present-day Urupês, that had both good yields with low susceptibility to pests and diseases. They discovered that the plants had grown from seeds that were collected from a single tree on the edge of a narrow road in the city of Mineiros do Tietê.

After years of studying and breeding, Mundo Novo was released in 1952. Even today, it is still recognized for its high yields and good cup quality. Although not resistant to pests and diseases, this variety is still widely cultivated in Brazil due to its high production.

This hybrid variety makes a sweet cup with bright acidity. Its name comes from the indigenous language of Guarani translating to “very good.”

Its origins can be traced back to 1948 when the IAC began developing a high-yield variety. The Catuai group is a result of artificial breeding of Caturra, for its short qualities, and Mundo Novo, for its high yields. It benefits from a smaller size, meaning more plants can be sown in the same space, and high productivity.

After years of research, the Red and Yellow Catuai group varieties were released in 1972. Due to their productivity and good cup quality, they became extremely popular. Catuai remains popular in Brazil, as well as being grown in countries such as Honduras, Costa Rica, Guatemala, Hawaii, Cuba, and many others.

Coffee leaf rust is a parasitic fungus that infects coffee plants, capable of destroying entire harvests. In the late 19th Century, it wiped out coffee plants in Sri Lanka, putting an end to its coffee industry. More recently, between 2012 and 2014, it caused over US $1billion of damage in Central America.

Before leaf rust reached Brazil in the 1970s, Alcides de Carvalho had already begun studies into coffee leaf rust resistance. Using hybridization techniques, he performed one of the first examples of artificial breeding of Robusta, known for its resistance, and Arabica. Although Carvalho was working on the development of this variety in the late 1960s, it wasn’t officially released until 1992, when it was named Icatu.

Icatu is now known to be highly productive and to have low susceptibility to pests and diseases, leading it to be commonly cultivated in Brazil. The name comes from the indigenous Tupi-Guarani language, which translates to “bonanza.”

The Timor Hybrid variety was discovered in the 1920s on the island of Timor in Southeast Asia. It was the result of the natural breeding between a Robusta plant and an Arabica plant, resulting in a natural resistance to coffee leaf rust, which is not found in other naturally occurring Arabicas.

Since then, many Brazilian research institutions have used the Timor Hybrid variety to develop more pest and disease-resistant varieties. This includes IAC 125 RN which has a resistance to coffee rust and roundworms, and Siriema AS1, a variety resistant to leaf rust and mining leaf bug.

Brazil has a substantial influence on the coffee industry. This is not solely due to its vast production of coffee but as a prominent figure in the development of coffee varieties which are much loved by consumers and valuable to farmers.

Its dedication to genetics and the development of coffee varieties is admirable. Without it, we wouldn’t have the high-scoring Yellow Bourbon, the highly productive Caturra, and many more.

Enjoyed this? Check out The Arara Variety: What Is It & Why Is It Popular in Brazil?

Geisha Coffee According to a 4th Generation Panama Producer
Choosing The Right Coffee Varieties For Your Farm
Starmaya: Could This F1 Hybrid Be The Ideal Coffee Variety?
Bourbon vs Caturra: What's a Variety & Why Should I Care?