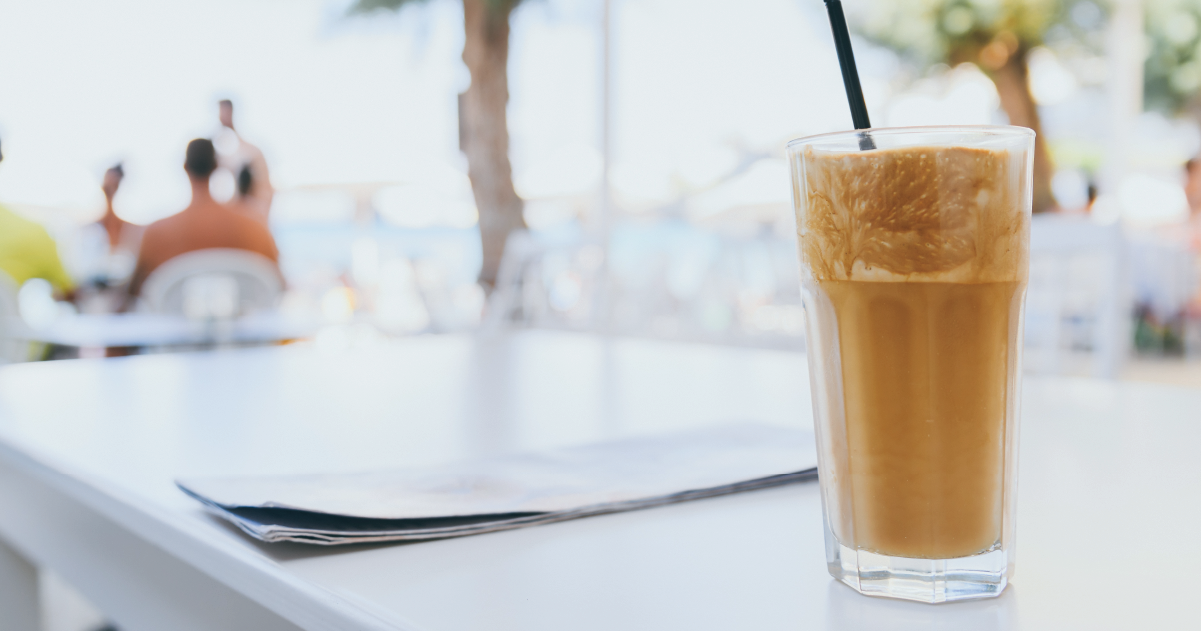 From its humble beginnings at a trade fair to its reinvention as a staple by global second wave giants, the Greek Frappé has a confusing and complicated story. Once a drink beloved by the Greek public, it now finds itself falling short against specialty coffee offerings.

What happened to the Frappé, and does it have a place in today’s specialty coffee scene? For answers, I spoke to Sarah Charles, a coffee writer based in Greece, and Vivi Sofia, Manager of Indonesia’s Simply Brew Specialty Coffee Roastery & Coffee Bar, in order to deconstruct the traditional Greek Frappé’s past – and understand where it stands today.

Summer feeling – close up of white Frappé in a glass. Credit: Marco Verch under Creative Commons 2.0

A History of The Greek Frappé

The Frappé was created in 1957, completely by accident. Nestlé employee Dimitris Vakondios was attending an International Trade Fair in Thessaloniki, Greece to represent the company as they promoted their latest product: a children’s chocolate beverage that could be instantly made in a shaker.

When he realised that he couldn’t find any hot water to make his instant coffee, he decided to improvise by mixing his instant coffee with cold water in the shaker, creating a foamy beverage resembling a milkshake. This reaction is caused by the proteins in the drink, which form a membrane on the drink’s surface that traps air and creates a thick, long-lasting foam.

While little is known about how the Frappé got its name, what is known is that by the late fifties to early sixties, Nestle began to promote it more heavily. As the recipe spread, its preparation methods began to evolve.

There are several variations of the drink, with different ranges of sweetness. Skétos is the original drink as mentioned above, métrios is sweeter with two teaspoons of sugar, and glykós contains four teaspoons of sugar. Milk can also be used, either as a replacement for water or alongside water to provide a creamier flavour and mouthfeel.

As time passed, Greeks started to embrace the Frappé as a natural part of their daily consumption habits. Easy to prepare and pleasantly cooling, it can be sipped slowly as it retains its form fairly well.

For many years, the Frappé was a popular drink in Greece. Credit: Dmitry Artyukhov under CC BY 2.0

Visit most Greek homes and cafés, and you will find a classic Frappé or milkshake shaker. Despite this, its popularity is low. The Frappé’s popularity started to fade in the nineties, when espresso was introduced to Greek’s emerging specialty coffee scene and took off rapidly. This led to the creation of iced Freddo espresso beverages, which offered customers refreshment and specialty coffee in one drink.

Sarah says that the Freddo was a way for Athenians to appear more refined, as it’s a more expensive drink, made with higher quality coffee, and is higher class. She adds that it’s a modern and urban drink, which makes it appealing to Greeks who embrace innovation and progress as a way of putting their harder days behind. “There’s a big class distinction associated. Nowadays almost only very working-class and rural…inhabitants drink Frappés,” Sarah explains.

Despite this, she notes that people visiting Greece enjoy Frappés, probably due to their limited presence in other countries. “Over the past ten years, I have noticed that tourists love [trying] the iced coffee concept when they come to Greece..they all wonder why the concept has not been embraced in their own countries.”

Over time, tastes have shifted from the Frappé to the Freddo.

As tourists visited Greece and experienced the Frappé for themselves, the idea slowly started to spread around the world. Each country adapted the recipe to meet their unique needs. Bulgarians sometimes enjoyed it with cola, Danes often made it with cold milk instead of tap water, and Serbs usually had it with milk or ice cream.

Many people falsely believe that the Frappé  and the Frappuccino are related, as they share similar names and are both drinks involving coffee and ice. However, the Frappuccino gets its name from the region where Frappuccino inventor George Howell comes from. In Boston, USA, it’s common for milkshakes made from ice cream to be called Frappés, making the name Frappuccino a portmanteau of a New England Frappé and Cappuccino.

The recipe for this drink was sold to Starbucks along with George Howell’s coffee shop. Starbucks further developed the Frappuccino, and today hundreds of variations exist around the world, with and without coffee. Other chains have followed suit by creating non-espresso based blended beverages. For example, Costa Coffee, a UK coffee shop chain with a presence in 32 countries, and the second-largest coffee shop chain in the world, has introduced a similar drink called a Frostino.

Vivi argues that the Frappuccino has pushed the specialty industry further away from Frappés. “[It] makes people forget that Frappés are a blended coffee beverage, not just a milkshake with coffee flavourings. The core of a Frappé should be the coffee, the flavourings should be there to compliment the flavour of the coffee, not the other way around.”

The rise in popularity of non-espresso based blended beverages could be partly attributed to the growing Millennial consumer base who are increasingly seeking out drinks without caffeine. Variations of the Freddo (and other iced coffee type drinks) offer a caffeinated alternative for those wanting their blended drink with a kick.

Starbucks offers customers a range of non-espresso based blended beverages.

Do Frappés Have a Place in Specialty Coffee?

The specialty coffee scene has been reluctant to take on the Frappé and continue its evolution. For this reason, it’s become a thing of the past in Greece. Sarah doesn’t have much hope that the Greek specialty industry will add the Frappé to its menus as Freddos have beat them to it. “Freddos – the Frappé’s next generation, let’s say – already ha[ve]. I don’t think an iced coffee made with soluble coffee could ever compete with an iced coffee made with freshly brewed specialty grade espresso.”

In today’s coffee scene, the Frappuccino has a captive audience, giving a new generation of customers a way to enjoy ice blended beverages – with or without coffee included.On the other hand, the Freddo has found its popularity in the specialty coffee scene, by offering customers high-quality coffee in a cooling and refreshing way.

With Frappés characterised by their inclusion of instant coffee, it’s a drink that is unlikely to keep up with modern tastes and demands – leaving it as an important part of past Greek coffee consumption, but unlikely to play a role in its future.

Enjoyed this? Then Read How To Improve Consistency When Making Espresso-Based Drinks

What is flash brew coffee?
What Is A Mocha?
How much caffeine is in cold brew coffee?
Exploring Vietnamese coffee