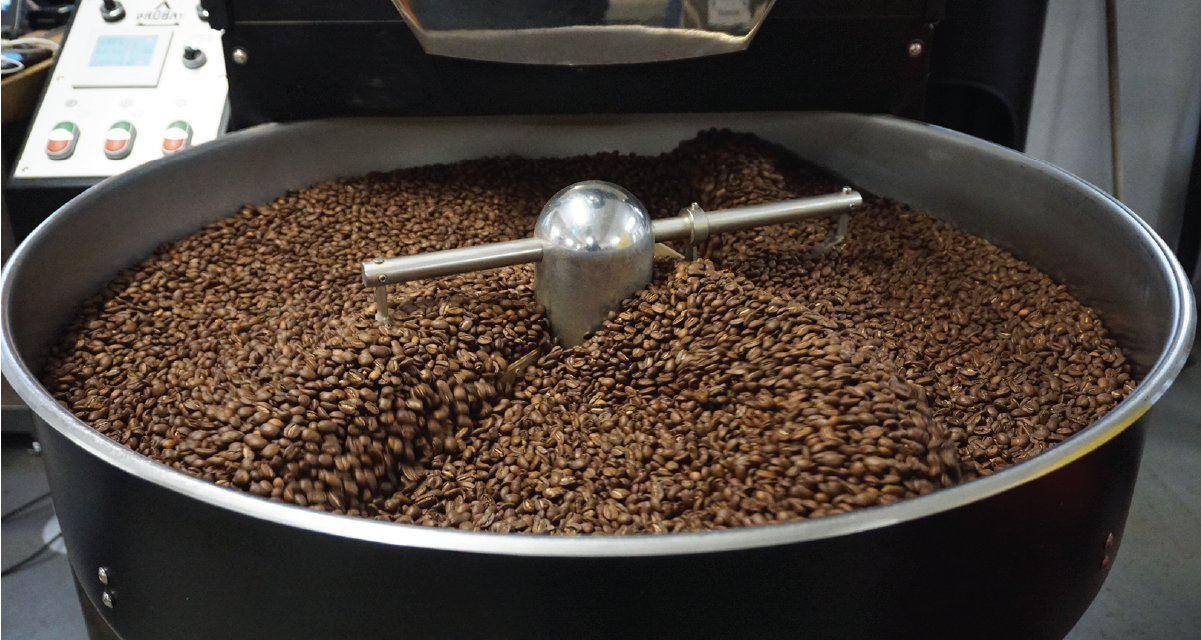 How your coffee is roasted will influence its taste and smell. However, with dozens of names in use to describe different roasts, it’s easy to get confused over what each one means.

Understanding these names will show you what characteristics to expect from your coffee. It will also help you better understand the coffee you enjoy and discover new ones that you might also like.

To make sense of all these names, I spoke to Casey Lalonde, Head of Coffee and Co-Founder of Girls Who Grind Coffee in the UK. I also spoke to Francisco Massucci Silveira, Owner of Virginia Roasters in Brazil, and Stephen Kraus, Founder of Press Coffee Roasters in the USA.

Roast Names Can Be Deceiving

You’ve probably heard a few roast names. Some concern the bean’s appearance (Cinnamon), the region it’s from (Viennese), or when it should be drunk (After Dinner).

Despite this, there’s little naming standardisation. Some terms are used interchangeably, others can describe a range of roast levels, and the names don’t always directly reference the coffee’s flavours or aromas.

It’s often said that darker roasts have a higher percentage of caffeine. However, lighter roasts actually have a higher concentration of caffeine per bean – but those beans also typically weigh more, so there’s no real difference in the amount of caffeine that ends up in your brew.

Roast levels are broadly grouped into three colour categories: light, medium, and dark. Let’s take a look at each category’s similarities and differences.

You may also like What Happens During Coffee Roasting: The Chemical Changes

Light roasts are light brown with a matte finish. They also have no surface oil, as they haven’t been roasted long enough for it to break through. Casey says that these roasts are “somewhat smooth with visible dark lines” and “have been roasted up to the beginning of first crack”.

First crack refers to the popping noise that occurs at around 205°C/401°F. As the heat increases, the bean expands. The increasing heat causes moisture in the bean to evaporate into steam. This creates pressure, forcing the bean to pop open.

Light roasts typically have a delicate, acidic flavour, retaining more of a bean’s original flavour than dark roasts. Casey says, “Lightly roasted coffee can be clean, bright, and full of delicate floral and fruit notes with great acidity. They’ll have a lighter body. It’s in light roasts that the natural characteristics of the coffee can be tasted.”

However, while light roasts can reveal a coffee’s natural flavours, Stephen warns that it can also result in “under-developed flavours” if not roasted sufficiently.

Light roasts come with dozens of different names. Here are some of the most common ones.

Having been roasted at a higher temperature for longer, medium roasts are darker than light roasts but still unlikely to have an oily surface. Casey says that “they have a smoother appearance to the lighter roasts. They have been roasted through first crack with time for more development to occur”.

At this stage, the bean will only display the signs that second crack is imminent. Here, the coffee’s natural qualities and brightness is complemented by a fuller body that’s introduced with roasting, creating a balance between acidity and body.

For Casey, this roast “can bring together a balance of acidity, sweetness and body”. She explains that the “increased caramelisation of sugars results in deeper fruit flavours and can be chocolatey and nutty”.

Stephen tells me that coffees “on the medium side of light roast” can show off the “natural flavours and sweetness of the coffee, while avoiding under-developed flavours that can sometimes be found on the lighter side of roasting.”

Francisco acknowledges that while each roasting profile “has its own qualities that could and should be marketed”, he associates medium roasts with “body and sweetness”.

Common names for medium roasts can include:

Dark roasts can range from medium brown to a shiny charcoal black in colour. The darker the roast, the more oil there’s likely to be on the surface. Casey tells me that “these roasts have been taken up to and through second crack”, which occurs at around 230°C/446°F.

These types of roasts will experience more moisture loss. As a result, it’ll be less dense, as most of its more complex flavours will be disguised by the flavours that come about from intense roasting. This means that it will have less subtle characteristics, with a deeper flavour that’s low in acidity and high in body.

Dark roasts retain little of the original flavour of its beans, with most of its flavour coming from roasting. According to Casey, it’ll “have little acidity or sweetness and notes of dark chocolate. These roasts can taste smoky and bitter”. Francisco tells me that the flavours he associates with dark roasts are “spice and bitterness”.

Why The “Best Roast” Doesn’t Exist

Choosing a roast depends on your personal taste, and as Francisco tells me, “individual preferences are very subjective and distinct”. For this reason, he doesn’t believe that there’s a right or wrong roast, and says that it’s important that there’s a wide range of roasts available.

Casey has found that light roasts are often chosen by coffee professionals, while her customers like ones slightly more developed. For Francisco, his medium roasts are best-selling, followed by dark and light roasts. Stephen says that he’s “built a great customer base that shares and appreciates” his coffees, which are light-medium.

While there are no best roasts, very dark roasts have had a poor reputation in the specialty coffee community. This is because they tend to be bitter, with strong roasted flavours that can obscure the notes inherent to a particular origin, variety, or processing method. However, this can often be influenced by controlling extraction, grind size, and water temperature.

Casey says that “we’ve all had horrendously over roasted coffee that’s burnt and bitter. This is not the flavour profile we aim for in specialty. We want to highlight the characteristics of the individual coffees we roast, not destroy them by roasting all flavour out of them. Saying that, I see a shift taking place where people in specialty are starting to appreciate their coffees being more developed… There’s a lot to be said for a coffee that has proper development compared to one that’s lacking.”

Why Not All Medium Roasts Taste The Same

Most roasts have distinct flavours. However, this doesn’t mean that you can expect the same flavours from coffees with the same name. Stephen says that when developing roast profiles, he accounts for “country of origin, region, elevation, cultivar, density, water activity, moisture content, and processing method”, as well as environmental factors like “ambient temperature and humidity”.

Francisco tells me that “there’s a strong relationship between variety, processing method, and roast profile. Different processing methods directly affect chemical changes in the seeds due to fermentation, stress, and germination metabolism, impacting the final quality of the coffee”.

There are many ways to manipulate these variables. For Casey, some coffees “need to be roasted slower and more gently to preserve the sweetness”, while others will “benefit from a quicker roast to preserve acidity”. Stephen says that “chocolatey, nutty Latin Americans usually have a longer roast length and a slightly higher drop temperature than fruity, floral Africans”.

It’s clear that roast names don’t tell the whole story, and that there can be a great deal of variation between coffees with the same roast name.

How to Adjust Your Brewing Based on Roast Level

Since darker roasts have spent more time in intense heat, they are more soluble, more porous, and less dense. This affects extraction, because different compounds are extracted at different rates. The first compounds to be extracted are those responsible for the fruity acids, then sweetness, and then finally bitterness and astringency.

This means that dark roasts, which already lean towards bitterness, must be carefully brewed. A coarser grind size and slightly cooler water temperature will help slow down extraction, while of course, you’ll also want to pay attention to the brew time.

Read more in Understanding Coffee Extraction to Improve Your Brewing

It’s for this reason that lighter roasts work best with a slower extraction methods, such as a filter coffee, and darker roasts work well with quicker methods such as espresso. (Although some roasters opt for omni roasting, which is preparing a coffee for brewing using any method.)

Stephen says, “if I roast a Kenyan coffee on a shorter profile with less development time and a low drop temperature, we’ll likely brew an incredibly sweet, tart, floral, and delicate cup of coffee on our pour over bar. If we try to pull espresso with that same batch of coffee, we’ll likely get a shot that is overly sour or astringent.”

Knowing the difference between different roast names is the first step towards understanding coffee better, and exploring what works for your personal taste. The next time you purchase a coffee, look out for the roast name and think about what kind of qualities you’d like to explore.

If you’re in the mood for something fruity or acidic, you might opt for a Cinnamon roast. If you want an espresso with notes of spice, you can choose a Full City roast.

Once you’ve taken your coffee home, remember that you don’t have to limit yourself to the same brewing methods either. Experiment with different techniques to see what impact they have – and prepare to take your appreciation of roasted beans to another level.

Enjoyed this? Then Read How to Become More Adventurous With The Coffee You Drink

An editor and writer with a background in book publishing, Tom enjoys walking, travelling, and a good cup of coffee in his spare time.