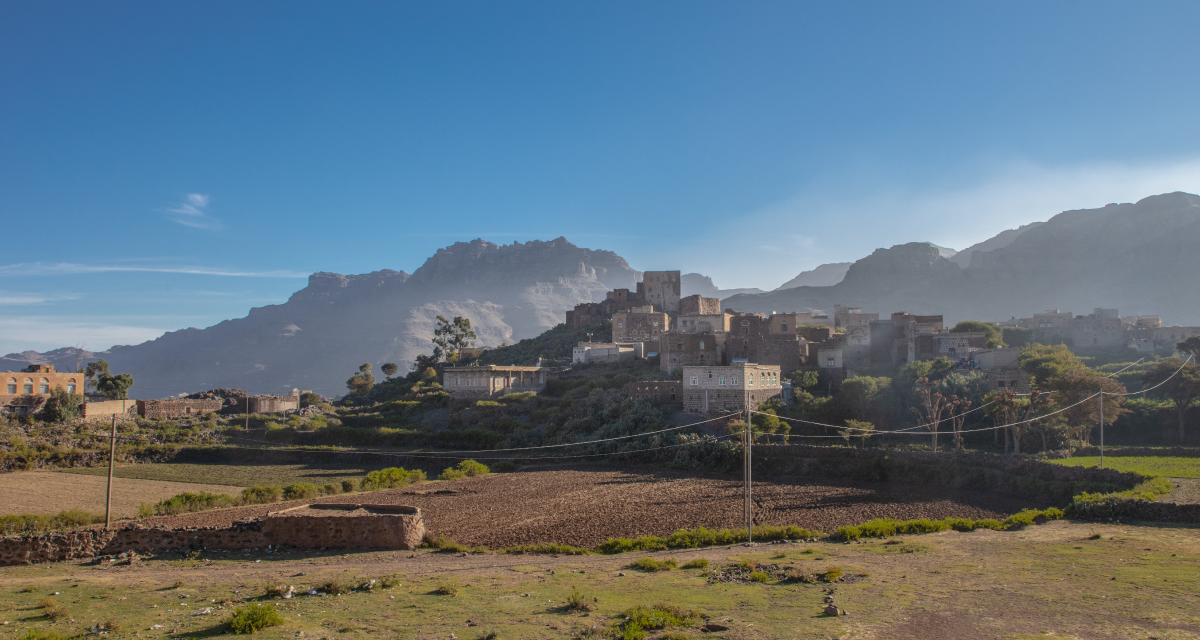 “Yemen has become the largest humanitarian crisis in the world,” states the UN. It is also a country that has exported coffee globally for almost 500 years. But today, its coffee farmers are facing some of the world’s most difficult living conditions.

How much responsibility does the coffee industry have to support Yemeni farmers? What are the challenges facing them? And how can coffee companies tackle these issues?

Even before the civil war struck, Yemen’s rural farmers were poor by international development standards. “Farmers would live on anything between US $1 to $3 a day,” explains Faris Sheibani, CEO and Founder of Qima Coffee, a Yemen-based specialty coffee exporter.

In this difficult socio-economic situation, the civil war has had a devastating impact. Before the conflict began, in 2014, Yemen’s GDP per capita was US $1,674. This made it one of the poorest countries in the Middle East and North Africa region. Yet by 2018, it had fallen 44% to US $944.

The collapse of the economy, the fall in the exchange rate, and soaring inflation translated to a doubling of food prices and a tripling of petrol costs. Faris tells me that this effectively halved the living standards of the average Yemeni.

The UN states, “An alarming 24.1 million people – more than two thirds of the population – need some kind of humanitarian or protection support. Some 14.3 million are in acute need of assistance.”

Faris explains that beyond food, there is little “income for anything else, including schooling, health care, you know, medical requirements, transport, travel, anything like that”. This means that Yemenis are dying from preventable medical conditions. “$30 a month, $40 a month, it could save someone’s life,” Faris says. “[Yemeni producers] don’t have that. They can no longer afford it.”

Yemen’s farmers earn very little. They are “super small garden farmers,” Faris explains, “and so the typical land area that the farmer would have is probably a quarter of a hectare, maybe less.” He calculates that the average farmer might grow 300 kg of coffee cherries and sell these for around US $1 to local middlemen, probably netting a yearly income from coffee of up to US $300.

To boost their income, Yemeni farmers often grow food alongside their coffee. They eat some of what they harvest and sell the rest at local markets. Yet sometimes this food is insufficient to feed an entire family. To stave off hunger, some farmers have “a wheat product that they add water to and that they would just drink the whole day,” says Abdulrahman Saeed, CEO of Sabcomeed, a direct trade partner for Yemeni producers. “They don’t eat meals like we do.”

Read more in Tracing Coffee’s Roots Back to Al-Mokha, Yemen

With neglected infrastructure such as roads and water systems, accessing higher-paying customers is challenging. Yet when producers are able to farm specialty coffee and find specialty buyers, they can see greater profits.

Around 300 families belong to the Al-Ruwad Cooperative in the Governorate of Sana’a. “When we [began working with them], they were receiving somewhere around US $1.50 to US $2” for their red cherries, Faris tells me. “They were largely neglected, forgotten, and taken advantage of by various traders and exporters who they were dealing with at that point.”

“[We] helped them to organize themselves and provide good financial control structures and good organizational structures [so they could produce] coffee traceably and sustainably,” he says.

Qima supported the Al-Ruwad Cooperative in marketing themselves through an auction in collaboration with the Alliance for Coffee Excellence. It raised over US $160,000, with an average price of US $36.13. Yahya H. Al-Lahaba, a producer within the Al-Ruwad Cooperative, sold his natural processed coffee at US $199 per pound green.

Not all producers have access to auctions like this. Yet Abdulrahman tells me that that selling specialty coffee direct to an importer can still bring in two or three times what a commodity-oriented intermediary might pay.

In fact, there is no guarantee that producers would be able to sell their coffee to that intermediary. “The commodity players do not go up there to the village,” says Abdulrahman. “Farmers have to take the cost and risk of going down there [to the local markets] and selling their dried cherries.”

He tells me that a trip to the local market can cost producers up to 4,000 Yemeni Reals, the equivalent of US $16, in a context where few coffee producers earn more than US $3 per day.

In this context, accessing the specialty coffee – and food – market can make a huge difference to producers. “We are focusing on becoming a specialty foods producer,” Abdulrahman says. “Because in Yemen you have mangoes and peaches and varieties that they don’t have… around the world.”

Faris Sheibani, Founder of Qima Coffee, with Haji Mubarak, one of the coffee farmers from Al-Ruwad Cooperative. Credit: Qima Coffee

Yet better prices aren’t the only things that Yemeni producing communities need. Better infrastructure is an urgent priority.

Sabcomeed built a road between Al-Shatt and Al-Sarbah, two communities in the Anis region, to reduce their transportation costs when visiting producers. “You’re talking about very minimal roads. I’m not talking about like London streets,” he emphasizes. “[But] instead of taking you two hours to get [from one village to another], building a road will [mean it] takes you half an hour.”

For rural communities, a road can have a significant impact on their quality of life. It reduces the time and cost of accessing local markets, making it easier to sell fruit and vegetables. Visiting a doctor in a bigger town becomes easier, meaning that preventable illnesses can be spotted early on. For children, going to school may also become possible.

Water is another scarcity. Farming communities often experience shortages, impacting not just the quality of the coffee they produce but also their quality of life. Qima Coffee handles this by providing the raw material for coffee communities to build water reservoirs. However, many other communities must make do without this support.

Then there are the issues of access to schools, doctors and dentists, and electricity (something the World Bank says is “almost nonexistent in many parts of the country”). Qima Coffee co-sponsors a school in the Al-Ruwad cooperative, covering teacher salaries.

Yet it’s hard to find a solution to all these issues.

I ask Faris what the barriers are to investing in infrastructure for a large group of Yemeni farmers. “Cash,” he replies. “This is the government’s job, not a company’s job.”

Haji Mubarak stands in front of a rainwater reservoir being built with support by Qima Coffee for his farm in Al-Hayma Al-Kharijiya. Credit: Qima Coffee

Specialty Coffee Is a Limited Solution

For all the positive impact specialty coffee can have for Yemeni producers, the gains can appear modest by the standards of the global north. Abdulrahman points out that the US $100 premium a very small coffee producer might earn selling at specialty prices would help them afford food for a couple of months, depending on the family’s size.

Faris tells me, “Because of hyperinflation and because of the general increase of cost of goods in Yemen, it has meant that, at the very least, farmers can maintain the same life that they’ve been living before [the war]”.

But even before the war, Yemen was considered one of the poorest countries in the Middle East and North Africa.

It is also difficult for farmers to increase their yield. “Yemen never had the luxury of basically a high-yield agriculture and high soil nutrition and a high rainfall capacity,” says Abdulrahman.

Most coffee producers across the world use fertilizer to increase yields. But not in Yemen. “It’s banned. It’s not even expensive. No fertilizer can enter Yemen,” says Faris. “If I want to import a container of fertilizer, I’m not allowed to because of the blockades, because fertilizer can be used for explosives. They are on the blacklist of products to be imported.”

There may also be a limit to the number of villages that have the necessary soil and climactic conditions for specialty-grade coffee. And currently, of the hundreds of thousands of farmers producing coffee in Yemen, Abdulrahman estimates that fewer than ten thousand work with specialty coffee buyers.

Reflecting on the Al-Ruwad Cooperative and the auction, Faris says that “it’s a success story on a small scale.”

But he is optimistic nonetheless. “It’s a beautiful case study that shows that if we can roll this out, and that’s a big if…, we may be able to drastically change the socioeconomic standards and conditions of hundreds of thousands or even millions of people.”

While the results “will probably not be as extreme as that case study”, he believes specialty coffee can have a powerful impact on the lives of Yemeni farmers and their families.

Support by private companies should not be the solution to Yemen’s humanitarian crisis. It’s unregulated and leaves consumers unsure whether their money is helping farmers or simply boosting a company’s profits.

Abdulrahman tells me that he often sees coffee sold as a Mocha Sanani rather than a Mokha, and this is a warning sign for him. He asks if a seller who doesn’t care how the name spelt will care about the realities of Yemeni coffee producers and their living conditions.

For him, it’s important to buy specialty Yemeni coffee from companies that are invested in the country. Because while private companies shouldn’t be the ones building roads and paying teachers, they’re often the only ones doing it in that particular farming community. And while the industry profits off Yemeni coffee, it has an ethical obligation to care about the quality of life of those producing it.

Please note: This article has been sponsored by Sabcomeed.

Specialty or Commodity? How Brazilian Farmers Choose
How Micro-Cooperatives Are Transforming The Kenyan Coffee Trade
Steps Towards Specialty in Vietnam, Coffee’s 2nd Biggest Producer
Five Useful Tools That Can Make a Difference to Coffee Producers