Perfect Daily Grind > Cacao > What Is a Cacao Cut Test & When Is it Useful? 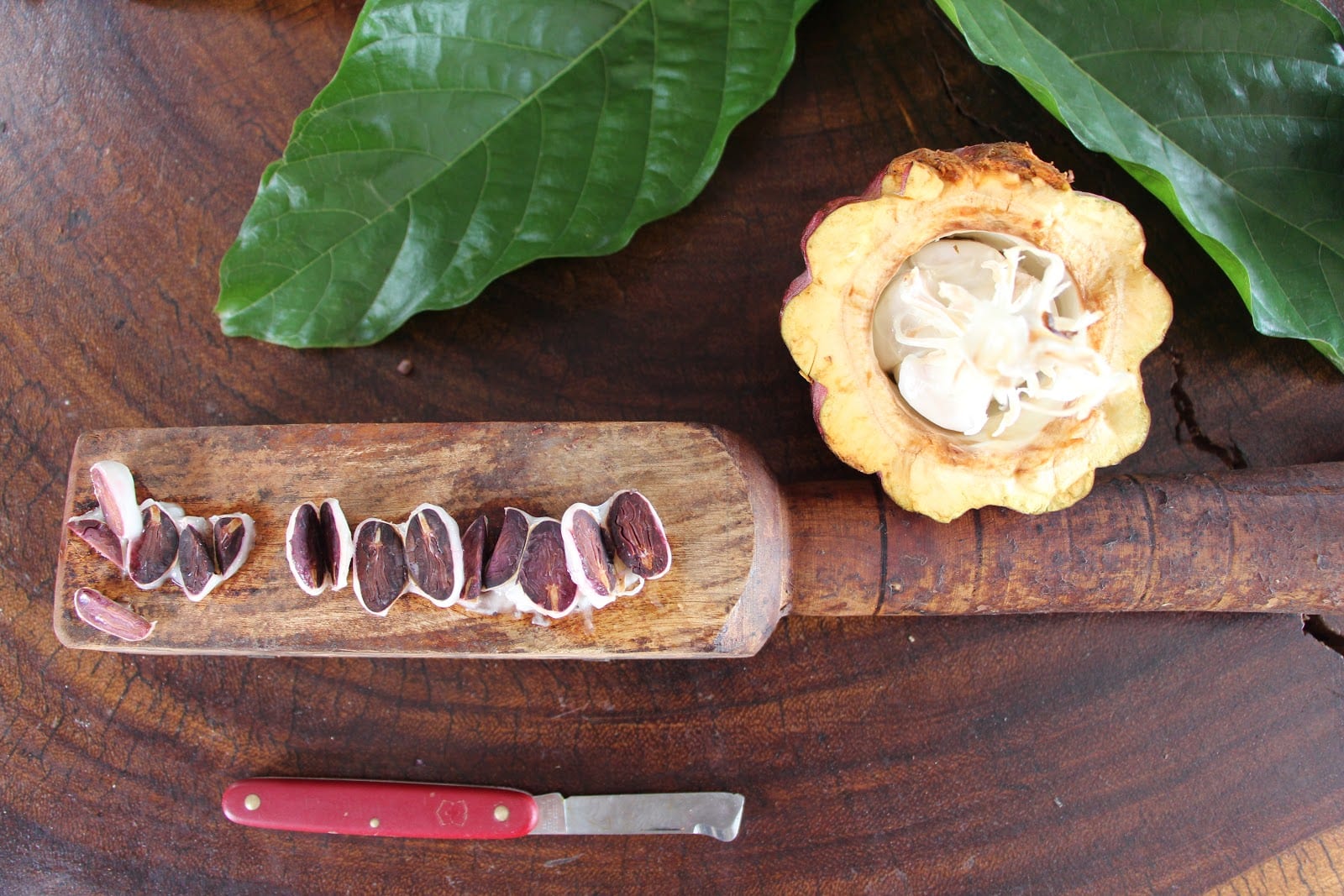 You may have seen striking images of bisected cacao beans. These vivid purple slices aren’t just for show – they’re part of an evaluation method called a cut test. But is this test actually meaningful?

Cut tests are one of multiple analyses done at origin to evaluate fermentation and give some indication of flavor. But they have some shortcomings, particularly when it comes to fine cacao. Read on to find out more about what a cut test can tell you, what it can’t, and how it’s performed. 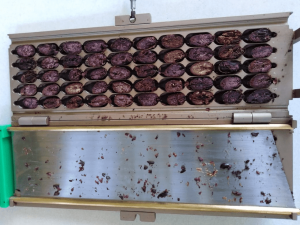 What Is a Cut Test Used For?

While still at origin, a number of tests are performed on cacao. Producers examine the quality of their processing, from the fermentation box to the end of the drying period, through smell. After drying, cacao samples are roasted and a taste profile test is performed using cacao liquor (this is made by grinding the roasted beans into a paste).

Cut tests are used to evaluate cacao bean health. They are also a way to assess whether or not a batch of cacao has been correctly fermented.

Katrien Delaet, co-owner of Silva Cacao, tells me a cut test is “cutting the beans into two with the purpose to analyze the level of fermentation,” and that it is a way for producers to evaluate “problems that might have occurred, like infestation or defects due to pests.”

Producers also check that the beans’ germ and cotyledon (the white web in raw cacao beans) have died off, and look out for any grayish-white evidence of mold. If the beans have germinated or have mold, they can’t be used.

You may also like What Happens During Cacao Fermentation? 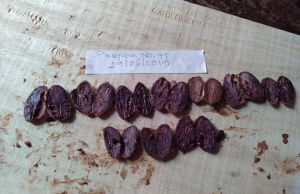 Numerous trade organizations, such as the International Cocoa Organization (ICCO) and the Federation of Cacao Commerce (FCC), have made it a requirement for large companies to use standardized cacao. That is, cacao that is all fermented to the same point, that all tastes approximately the same. Buyers can easily measure that standard by checking the color of the beans.

Beans that are at the correct level of fermentation will no longer be their natural purple or reddish color, but a shade of brown. Inspectors use established guides to check the color and aim for one uniform shade in the batch. 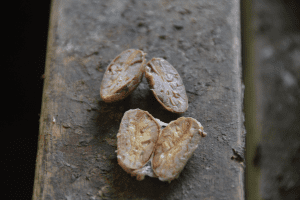 How Is a Cut Test Performed?

To perform a cut test, you simply cut fermented cacao beans in half to evaluate their centers. They are usually performed on at least ten beans to have a representative sample of each batch. At least 70% of the beans must be fermented to the correct level to be considered successful.

Cut tests are performed throughout the fermentation process. Farmers will evaluate a small amount each day of fermentation to monitor the progress and to spot any health issues or infestation early on.

Once the beans have been removed from their fermentation boxes and set out to dry, farmers might do some more cut tests. Often, they do a major cut test (sometimes done with a guillotine) of about 50 beans at the end of processing. This is done to check the overall fermentation level for each batch.

Throughout the process, if a large amount of samples in a batch have mold, are slaty (not grooved, but slick and greyish), or have germinated beans (the germ and/or cotyledon are still present), the batch is deemed useless and destroyed.

On the central, upper part of this cut test, you can see an example of slaty bean, a sign of inadequate fermentation. Credit: Silva Cacao

So, cut tests are an effective way to check for defects, evaluate the level of fermentation, and keep an eye on health standards in a batch of cacao beans. Some producers also use cut tests as an indicator of flavor, so they can replicate specific profiles. But cut tests alone won’t tell you much about the particular flavor notes in a bean.

Katrien says that a cut test “explains how far the chemical processes of yeast, lactic, and acetic bacteria are evolving,” and that they “mostly help me to understand what I taste afterwards [when the flavor test is conducted].” 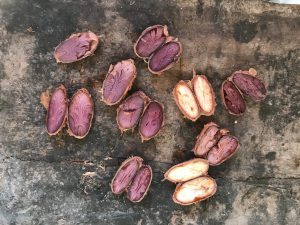 A certain shade of brown may be considered good, but this is based on uniform cacao flavor for commercial chocolate. Rather than aiming for this standard level of fermentation, fine cacao producers can use cut tests to become informed on the relationship between a color and its unique profile. Through trial and error, they can get to know what level of fermentation produces the results they want.

What this means for fine cacao producers is they can supply a plethora of options to customers in the craft chocolate world. Katrien says, “you need to really find that balance, and depending on the amount of days [of fermentation] you can do your tests and try to have an optimum of flavor expression depending on your fermentation protocol.”

Farms that have mixed varieties of cacao will have a hard time reaching consistency in cut tests. Different varieties react to fermentation differently, so a batch with mixed varieties will rarely yield consistent cut tests. If a producer simply looks at a cut test, the batch may be dismissed as bad or under-fermented.

Most written guidelines have dictated a standardized processing procedure, instead of taking cacao’s diversity into consideration. At the buyer level, cut test requirements have precluded the exploration of cacao flavor profiles. Compare this to the world of coffee, where dark roast was once the standard. Now, people enjoy a range of roast profiles, which are connected to variety and processing choices.

Learn more in What Can The Coffee & Cacao Industries Learn From Each Other? 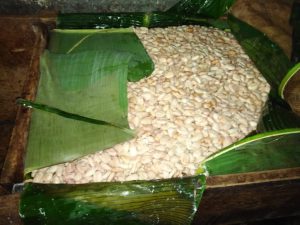 “I don’t use cut tests at all,” he continues. “It’s really sad that you kind of just put it [cacao beans] there and say ‘it can only be this’. If you have any kind of fruity acidity, tannins, any other things that we kind of look for in other foodstuffs as a quality sign, it’s considered bad in chocolate.”

Mikkel prefers to learn about cacao by roasting it and tasting the resulting chocolate. He is more concerned with the unique flavor characteristics than what is considered good or bad based on color during cut tests. 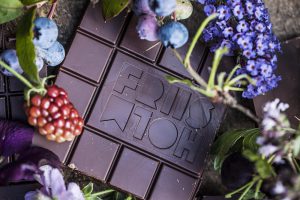 If producers and chocolate makers are focused on uniform brown beans, they may miss stages of fermentation that produce much fruitier, deeper flavor profiles. Of course, taste is subjective, and chocolate makers should go with the protocol they like best. But they shouldn’t limit themselves by making decisions based entirely on color. Maybe the flavor profile they are looking for lies in dark purple beans that would traditionally be considered under-fermented.

An example of this is the Bad Fermentation chocolate bar from Friis-Holm. Mikkel explains, “We had this Rugoso [cacao from Ingemann in Nicaragua] that is really special, very powerful, with lots of tannins. It has lots of deep proper flavors.” He says that “with the tannins in it, it also matures and ages really, really well.”

But Mikkel was disappointed the next time he ordered this cacao. Ingemann had switched to a classic fermentation protocol after customers rejected their Rugoso due to bad cut tests. Fortunately, they agreed to try out different protocols, and Mikkel buys an “under-fermented” one for his chocolate. “It was easy peasy for me to pick it out,” he says. 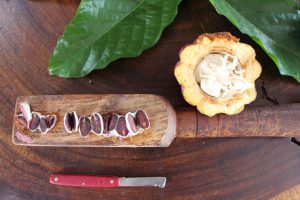 When used to evaluate the progression of fermentation, and to check on health, cut tests are a useful tool. But they’re not an accurate indicator of what is good or bad cacao.

Cacao grading is moving towards a much more holistic approach, where cut tests are one consideration, rather than the whole analysis. Slowly, the industry is adopting more nuanced methods to evaluate quality and allow room for individual features and preferences.

Collaboration between fine chocolate-makers and producers could lead us to a point where buyers could order beans fermented to their preference, just as a customer in a restaurant can order their steak rare, medium, or well-done.

Enjoyed this? You may also like Understanding Chocolate Flavour, Texture, & Astringency

Getting to know the three main cacao varieties
How to Evaluate Cacao & Chocolate
Why You Should Know About Fine Togolese Cacao
Is Producing Fine Cacao Worth It?