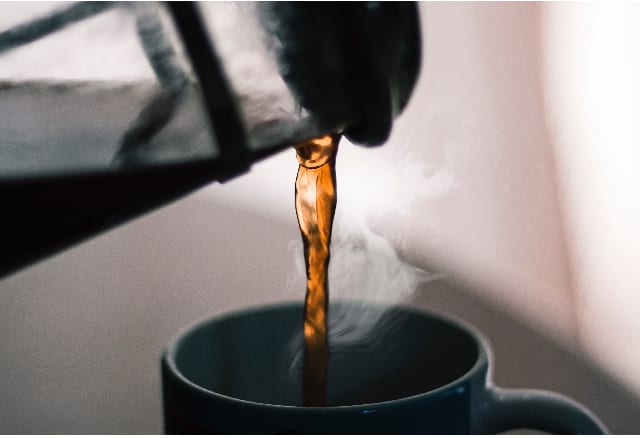 We drink coffee to enjoy its unique flavor notes and its rich aroma. Chocolate, caramel, almonds, fruits, and flowers are all evoked when we make a pour over or sip from an espresso. But what is happening on a chemical level?

Each sensory characteristic is the result of chemical and biological reactions. Read on to find out more about what creates coffee aroma.

Where Coffee Aroma Comes From

Green coffee beans don’t smell of much. It’s only through roasting that we created the various volatile compounds that make that unique coffee aroma. And what we perceive as flavor is often actually aroma – only mouthfeel and sweet, salty, bitter, and sour tastes are perceived by the tongue. When these combine with the aroma sensed by receptors in the nose, we get flavor.

But the complexity of aromas relies on the composition of chemical compounds in the green beans. These precursors of volatile compounds have different concentrations depending on many variables, including variety, weather conditions at origin, level of maturation, and processing choices.

Learn more in Why Is Coffee Aroma So Important For Coffee Flavour?

Which Compounds Create Which Aroma

The aroma precursors are various forms of carbohydrates, proteins, and acids. Throughout the roasting process, and particularly during the Maillard reaction, they are transformed into volatile compounds. Different compounds create different sensory characteristics during roasting and the level of roast can further impact how we perceive the aroma.

Unpleasant aromas are also produced during roasting. Phenols, such as guaiacol, are produced by the breakdown of free phenolic acids during extended roasts. They have ashy and smoky aromas.

You may also like What Happens During Coffee Roasting: The Chemical Changes

How We Perceive Coffee Aromas

We now know how some volatile compounds are formed during coffee roasting. But it is also important to mention that aromas are perceived in different ways.

It is estimated that more than 900 aromatic volatile compounds are produced during roasting, but only around 30 of them have effective participation in the aromas and flavors we perceive in the cup. We are simply not able to detect most of the compounds. The compounds also need to be in balance for us to have a specific sensory experience.

When we smell coffee grounds, the molecules are freely interacting with our olfactory receptors. When the grounds are added to water to make a cup of coffee, other molecules are extracted and we have a different sensory experience.

Polarity (the difference in electrical poles of molecules) is a driving force for the extraction of volatile compounds in the beverage. During extraction, the high polar molecule of 2,3-butanedione (with a buttery aroma) extracts first, while β-damascenone may take longer to occur in perceptible amounts, because it is less polar. In simple terms, different compounds extract at different rates so we will perceive different aromas at different points of extraction.

Find out more in Understanding Coffee Extraction For Your Perfect Cup

The interaction of compounds may also change perception. For example, 2,3-butanedione, which is usually perceived as having a caramel aroma, may increase the perception of sweetness in coffee.

Fabiana Carvalho is a neuroscientist who investigates neural processes of memory, sensation, and perception. She tells me that there is an effect of increasing or decreasing taste intensity between congruent compounds. Fabiana gives the example of an experiment that showed participants perceived a sucrose solution to be sweeter when a strawberry odorant was added.

Coffee brewed in a French Press being poured into a cup. Credit: Nik MacMillan

By understanding how aroma is created and perceived, we can make more informed decisions on how to brew and recognize why various levels of extraction can taste and smell so different.

Why not experiment with some different brewing techniques or try coffees at different points of extraction and see what you perceive?

Find this interesting? You may also like How Your Coffee Cup Makes Your Coffee Taste Better – Or Worse

Veronica is a contributor based in Brazil.

Shop For a Cause: Amazon & Anacafé Support Education in Guatemala
WBC Alejandro Mendez: How to Promote Specialty Coffee in El Salvador
Fika Coffee Break: The Social Ritual of Coffee
How Does Coffee Affect Your Brain? Are You Addicted to Caffeine?