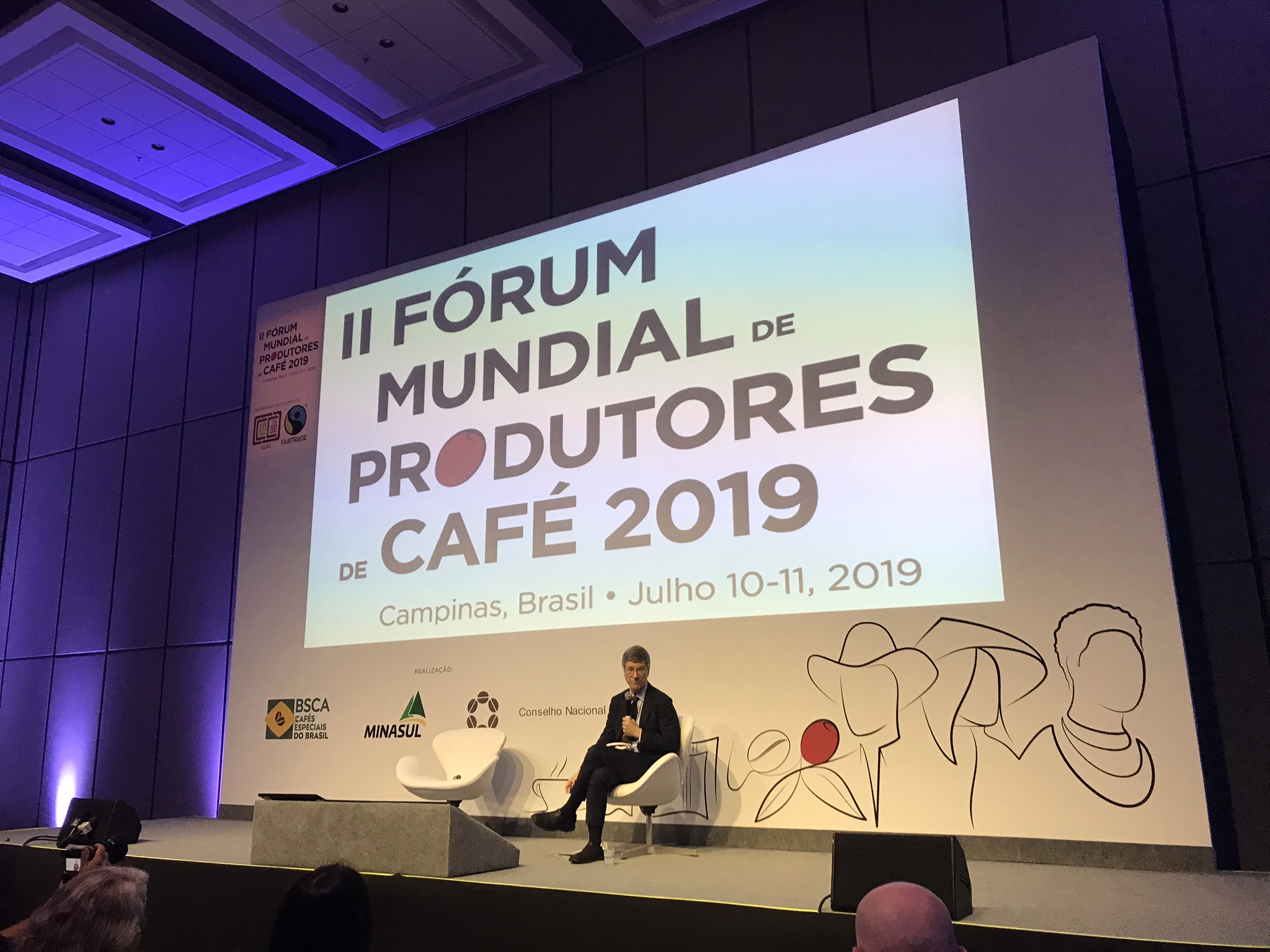 Last week, on July 10th and 11th, one of the most important events related to coffee production took place in Brazil. The second World Coffee Producers Forum was held in Campinas. It was organized by the coffee cooperative Minasul, the Brazilian Specialty Coffee Association, and CNC, the Brazilian national coffee council.

The event aimed to bring together representatives from coffee-producing nations and elsewhere to discuss common interests including coffee prices, producer welfare, environmental issues, and sustainability.

More than 1,500 people from across the globe came together for panels, workshops, and conversation. Read on to find out more.

What Happened During The Event?

The first day of the event included an opening address on the topic of economic sustainability from Professor Jeffrey D. Sachs and three panels on key issues in the coffee industry. The themes of these panels were:

The second day was dedicated to workshops, which were based on the panels. Let’s take a closer look at what each session included and how attendees responded to the topics.

You may also like Will Brazil’s Sudden Frost Increase Global Coffee Prices?

Results From The Economic Sustainability Study

Jeffrey D. Sachs is a renowned professor of economics and a leader in sustainable development. He opened World Producers Forum 2019 with a presentation on the results of his study, “Economic and Political Analysis to Improve Small Coffee Growers’ Income”.

Prof. Sachs outlined how coffee-producing countries are struggling to achieve better productivity. He said, “Brazil has had a consistent rise of productivity of yields, whereas other countries [other than Vietnam] have not… Any country that hasn’t experienced a productivity increase will feel a tremendous squeeze right now.”

During the lecture, Prof. Sachs explained that as costs of production are increasing, more productivity is needed. He proposed the following actions to help raise productivity:

Prof. Sachs also said that static productivity and rising costs of production were contributing to extreme poverty, child labour, deforestation, and limited access to basic services in most coffee-producing areas.

He proposed the introduction of a Global Coffee Fund. This would be an annual US $10 billion fund that would be created by contributions from the coffee industry, public and private donors, and investments in farms. The Global Coffee Fund would aim to provide:

The audience expressed some doubts about the viability of this project: could a US $10 billion fund be raised and, if so, could it be effectively managed by a multi-stakeholder group?

Questions were also raised about the impact on the environment and supply and demand. Many felt that the focus on productivity could push coffee prices down further. While Prof. Sachs pointed to growing consumption in China as a way to balance supply and demand, not everyone was convinced that this would be sufficient.

However, there was general consensus that a solution to growing poverty and deforestation was required, and the lecture set the tone for the whole event.

The Market as an Instrument to Protect Producers’ Incomes

The first panel of the event was moderated by José Marcos Rafael Magalhães, president of Minasul and Director of CNC. He introduced the panel and spoke about the actions of Minasul, which he says supports 7,000 producers by providing them with training, technology, and sales.

The panel was intended to address whether current market mechanisms protect or harm the income of producers, and look at the impact futures contracts and other mechanisms have on coffee prices.

José Dauster Sette, Executive Director of the International Coffee Organization (ICO) made a technical presentation on speculation and the futures market. He outlined how coffee prices are not just created by supply and demand, but are also influenced by many other actors such as climate events and market speculation.

He suggested regulations such as raising transaction costs for non-commercial traders and limiting the amount of coffee available for trade to reduce the impact of speculation on the market.

Roberto Velez Vallejo, General Manager of the Colombian National Coffee Growers Federation, then took the stage. His take on the topic was more personal. He asked, “How can you ask for a producer to take care of the environment if he is not feeding his family?”, and emphasised that producers are experiencing poverty at levels never seen before.

Roberto proposed the creation of a “roasted at origin” seal, which he saw as a way to motivate producers to roast their own coffee and increase profits. He also suggested a minimum price of US $2 per pound of coffee.

Anna Illy is Vice President of the Ernesto Illy Foundation, which has a focus on ethics and sustainability. She outlined the organisation’s projects, which include a course in coffee business management and agronomy that aims to “develop the next generation of industry leaders from coffee producing countries”.

Anna emphasised that it is possible to grow as a company while being both economically, socially, and environmentally sustainable.

Chad Trewick, founder of Reciprocafé LLC, a consultancy prioritising mutual benefit in coffee value chain support, was the last speaker. He spoke about his work on the Specialty Coffee Transaction Guide. The guide is based on data from donors including Cafe Imports, Caravela Coffee, and Stumptown. This information is then analysed to establish how prices are related to quality and volume.

Learn more in How Much Should We Pay For Green Coffee?

The second panel was moderated by René León-Gómez Rodas, Executive Secretary of PROMECAFE, the Regional Cooperative Program for the Technological Development and Modernization of Coffee Cultivation. It addressed what responsibility the industry has regarding traceability and transparency of prices and whether transparency and traceability will lead to better economic sustainability for farmers.

Guilherme Amado, Nespresso Green Coffee Manager, talked about Nespresso AAA Sustainable Quality. The programme was developed in collaboration with the Rainforest Alliance to create a sustainable supply of high quality coffee while improving conditions for coffee farmers and their communities.

Patrícia Carvalho, Special Coffee Manager for 3 Corações Group, the biggest coffee roastery in Brazil, highlighted some of the company’s programs. One initiative is Florada Premiada, an annual contest to promote and award coffees produced by women in Brazil.

Sara Mason, Founder and Executive Director of SHIFT Social Impact Solutions and ID Coffees explored how information from origin should be used to aggregate value to the coffee chain. She proposed using blockchain technology to ensure traceability from seed to cup.

Learn more in How Can Blockchain Empower Coffee Producers?

Annette Pensel was the last panellist to speak. She is Executive Director of the Global Coffee Platform (GCP), an international initiative that seeks to bring together and share information about many aspects of coffee production in a mobile app.

Annette highlighted the importance of encouraging roasters and retailers to source more sustainable coffees. GCP proposals to reduce efficiency gaps in the coffee chain include ensuring faster payments for farmers, and improving farmers’ access to agricultural inputs in order to improve productivity.

The final panel was focused on how to promote and increase coffee consumption. It used Brazil’s increase in domestic consumption as an example. Carlos Brando, an engineer and partner of P&A Marketing International, moderated and spoke about the importance of encouraging general coffee consumption instead of focusing on specialty coffee.

He suggested that the industry should focus on the positive “instead of telling them [consumers] negative things like ‘if you pay more for your coffee you avoid child labour or deforestation’”. He said that “no-one wants to consume a product that’s associated with negative ideas. Consumption has to be pleasant.”

Carlos also said that coffee companies should consider the consumer’s income. He said, “A lot of the people who are adopting consumption do not have a high income, so we have to think about ways to promote consumption according to their income… Quality is proportional to the size of the consumer’s pocket.”

Nathan Herszkowicz, Executive Director of ABIC, the Brazilian Coffee Industry Association, talked about the strategies used by the association to stimulate domestic coffee consumption. This included the example of the first certification seal of purity, which was created by the association in 1989.

Nathan also discussed the Coffee Quality Program, which was introduced in 2004. This initiative categorises coffee as Extra Strong, Traditional, Superior, or Gourmet, which he says encourages consumers to seek out better quality coffees.

Moenardji Soedargo is Director of Operations and Vice President of PT Aneka Coffee Industry, an Indonesian manufacturer of instant coffee. He explained that Indonesia is traditionally a tea-drinking country and reported that the most popular coffee products in there include sugar, soluble coffee, and creamer. He attributed the fast rise in coffee consumption in Indonesia to the popularity of social media and strong economic growth, as well as other recent cultural transformations.

Phyllis Johnson, Co-founder and President of BD Imports, discussed the market in the United States. She said that the coffee market there is well-established in terms of volume of consumption, but that consumers are now seeking better quality coffees.

Phyllis Johnson of BD Imports during her speech about coffee consumption in the USA. Credit:World Coffee Producers Forum

The second day of the event was dedicated to workshops on the same themes as the panels. Each workshop included a moderator to promote dialogue and encourage discussion of practical solutions. At the end of each session, moderators organized general conclusions and recommendations to be approved by each group and presented later in the event’s final declarations.

At the closing ceremony, Vanusia Nogueira, from the Brazilian Specialty Coffee Association acknowledged that although “the first Forum raised worldwide awareness of the need for economic sustainability in global coffee supply… there has not been effective engagement from the other sectors in the coffee value chain to improve coffee producers’ remuneration.”

She also said that “research by Professor Jeffrey D. Sachs highlighted the need for interaction among all agents in the value chain for the development of global actions, in addition to those already carried out in each country.”

In the days after the official event, cooperatives and partners promoted field trips for attendees. Groups visited five different farms:

These farm visits provided an opportunity for roasters and other industry players to see where Brazilian coffee comes from first-hand and make personal connections with producers.

Enjoyed this? You may also like What’s a Fair Price For Coffee? Interpreting Transparency Data

The Emerging Specialty Coffee Regions to Pay Attention To
A Roaster’s Guide to Coffee Purchases & Budgeting
Blockchain & Coffee: Separating The Marketing From The Reality
How Much For a Coffee? Prices Decrease, But Value of Exports Grows