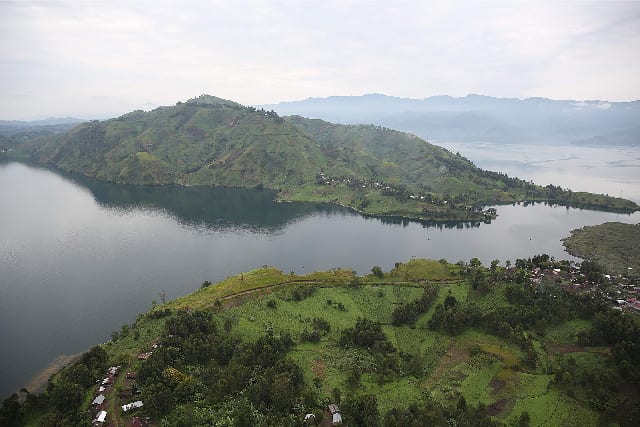 The Democratic Republic of Congo (DRC) is resource-rich but lacking stability and infrastructure due to years of civil wars. The nation once had a thriving coffee industry but today needs a development strategy to help producers fulfil their high potential and to improve farmers’ quality of life. But some NGOs and other agencies are making steps towards revitalising the DRC’s coffee industry.

Read on to learn about how agencies are working with cooperatives to improve life for Congolese producers.

Despite having the potential to become one of the richest countries in Africa due to its natural resources, DRC is one of the poorest countries in the world. Between 1994 and 2003, the DRC’s economic and social progress was hampered by post-colonial civil wars, which the BBC reports to have claimed up to six million lives, either as a direct result of fighting or because of disease and malnutrition. Tensions remain in the eastern parts of the nation, where the country’s coffee growing regions are located.

Coffee production was nationalised in the 1970s and grew successfully up to the early 1990s, by which time the DRC was producing 120,000 tonnes per year. Then, understandably, coffee production declined during the conflict. It’s reported that the country’s coffee output in 2010 was less than a tenth of the harvest twenty years earlier, due to political instability and related impacts on infrastructure.

You may also like Zimbabwean Coffee: Rising From The Ashes

The lack of an export market during and after the Congolese wars meant that farmers were forced to sell their beans in their raw state to be processed in neighbouring countries. This is less profitable than selling processed coffee. For many farmers in the Lake Kivu islands, finding a buyer for these raw cherries meant a dangerous two-day trip in a fragile wooden canoe to Rwanda. If they were lucky, they could expect to receive prices far below market value for their coffee. If they were less fortunate, they’d be attacked and robbed.

Local people have told me that around 2,000 coffee growers drowned making the crossing.

Kawa Kivu is a platform of Congolese specialty coffee producers united in several farmer-led cooperatives in the provinces of North and South Kivu. One of its cooperatives is the Kivu Cooperative of Coffee Traders and Planters (CPNCK), which was established in 2011 with an aim to “prevent suffering, save human lives, and protect animal species threatened with extinction.” CPNCK currently has over 2,100 members.

When CPNCK coffee is sold, the cooperative takes a part of the profits to pay for its running costs. It distributes the balance back to the growers, who receive a basic payment and a share of any profits.

The Eastern Congo Initiative is another agency working to improve life for Congolese producers. Through partnerships with Starbucks and Falcon Coffees, the organisation is working “to develop sustainable agricultural production and help restore Congo as a key source of high quality coffee”.

Partnership Is Key to Improvement

Belgian NGO Rikolto and the agency I work for, Ensemble Pour la Difference, are focused on improving productivity, quality control, infrastructure, and distribution networks. We hope that by working together with cooperatives, we can improve conditions and profitability for farmers and distributors in the DRC.

In 2013, Ensemble Pour La Difference partnered with CPNCK, providing a loan that helped create the first full-container shipment of green coffee off the Lake Kivu island of Idjwi. Rikolto later partnered with CPNCK to install 19 micro washing stations on Idjwi. Rikolto and CPNICK also built a warehouse for triage and storage, and installed a hulling machine. Coffee has been grown here for over half a century but these additions have made huge changes.

These improvements in infrastructure mean that the cooperative can avoid the delays and costs of sending parchment to a separate dry mill on the mainland. They also empower the producers, who can now oversee quality control throughout the whole process.

Improved operational efficiency and higher quality coffee creates more demand and more income for the island. For coffee growers, this means real life improvements. With more income, they can send their children to school and afford medical care.

Challenges remain in the DRC, particularly for island farmers. These include a lack of basic utilities including electricity and plumbing. The micro washing stations and hulling machine installed on Kivu run on a generator, which adds a considerable amount to the cost of production.

Transport to and from the islands is by small pirogue boats, which have limited space and are time consuming, making them expensive.

There is also still some political instability in the eastern region of the country, where coffee production is focused.

At CPNCK, cupping scores are consistently above 85. This year, the cooperative intends to install a cupping lab, which will help producers better appreciate quality. The organisation recognises that to grow the nascent local coffee industry and develop a sustainable international business model, it’s vital that they invest in producers.

The president of CPNCK, Gilbert Makelele, is dedicated to growing the business relationships and reputation of the region. He meets regularly with international buyers and attends industry events to raise awareness of Kivu coffee.

I estimate that, at the moment, CPNCK is exporting only 15% of the island’s potential coffee output. But with improvements to quality and the growing reputation of coffee from Kivu will come increased demand. There is potential for coffee to become a viable core industry for the area.

The DRC has reserves of diamonds, copper, gold, and a significant amount of the world’s cobalt (crucial for the production of modern technology from mobile phones to Teslas). With these resources, Congolese people ought to have more – more utilities, better health care, more educational opportunities, better infrastructure, etc.

But this inequality is not stopping the farmers of eastern DRC from working towards progress. The successes of CPNCK and Kawa Kivu demonstrate that if people are given the tools, knowledge, and a stable environment to grow in, progress can be made.

Enjoyed this? You may also like How Immediate Payment Coffee Auctions Can Benefit Producers

Mike is a contributor based in USA.