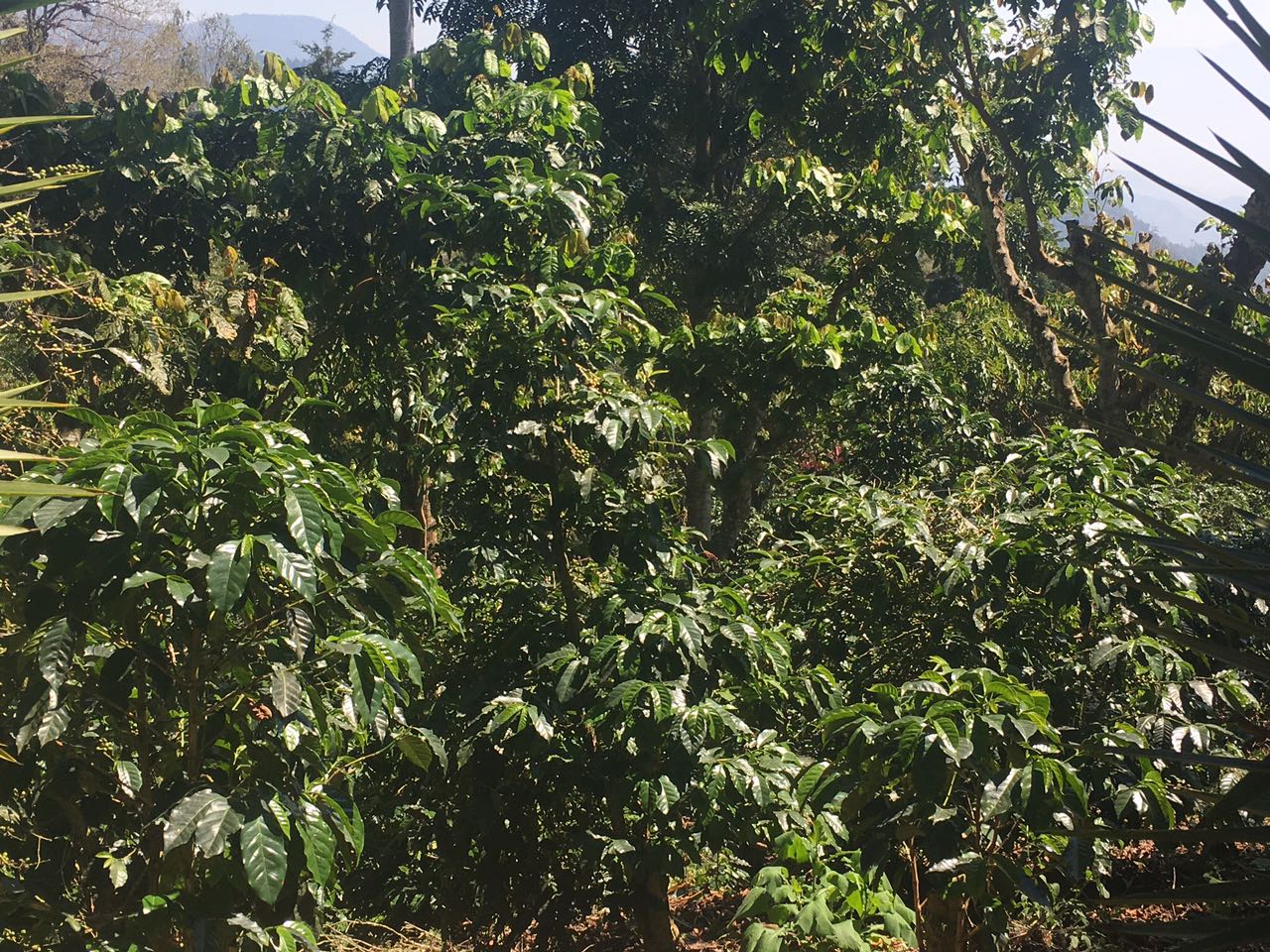 Anyone who works in coffee production is likely familiar with the threat of coffee leaf rust. Devastating outbreaks of the fungus have made headlines in recent years. World Coffee Research reports that an epidemic that started in the 2011/2012 harvest season affected 70% of crops in Central America, with over US $3 billion in damages and lost income.

Infection with coffee leaf rust not only affects the price of coffee, but has the potential to bankrupt small estates. An ill-timed outbreak can place already vulnerable workers in absolute poverty and destroy communities.

So, how can you protect your farm from coffee leaf rust? Read on to learn about some good practices for monitoring and prevention, with insights from other producers.

You may also like A Guide to Common Coffee Pests & Diseases

What Is Coffee Leaf Rust?

Also known by its Spanish name, la roya, coffee leaf rust is a parasitic fungus that infects coffee plants. It manifests as yellow spots that first affect the undersides of the leaves and then develops into a yellow-orange powdery dust that is easily transferred among plants.

Coffee leaf rust can be traced back to the birthplace of coffee, Ethiopia. From here, it followed coffee production around the world. In the late 19th century, Sri Lanka was one of the world’s largest coffee producers, exporting over 100 million pounds each year. But in 1892, a leaf rust epidemic wiped out all of the island’s coffee trees and producers changed to growing tea.

More recently, the fungus has spread in many Central American producing regions. World Coffee Research states that over 1.7 million coffee workers lost their jobs and that coffee leaf rust caused US $3.2 billion in damage and lost income in an epidemic that started in 2011.

Coffee leaf rust attacks the leaves of the plant, preventing them from photosynthesizing light into energy. As the disease progresses, the leaves fall off, as well as any flowers or cherries. The result is a much reduced or completely destroyed harvest.

“La roya is like cancer. It drains all the energy from the plants,” says Frederico Calderon, a farm technician at Dinamica Coffee in Guatemala. “Plants will use up all their energy fighting the disease and have nothing left to feed the cherries.”

And because the fungus damages the plant, it also reduces future yield and quality. For many farmers in Central America, it caused the loss of two or more crop cycles.

Learn more in How Is Honduras Responding to Recent Coffee Leaf Rust Outbreak?

Coffee leaf rust thrives in the same conditions as many coffee varieties. Its ideal temperature is between 15 and 30°C/59 to 86°F and humidity triggers germination.

One of the difficulties in fighting coffee leaf rust is how easily it is spread. Because the spores are light and powdery, they’re easily transferred by wind and rain and catch on the clothes and tools of workers.

Alvaro Gaitan holds a Ph.D in Plant Pathology from Cornell University, and for several years was the Head of Plant Pathology at Cenicafé, the National Center for Coffee Research in Colombia. He tells me that when rain hits infected leaves, the spores are released into the air and easily transfer onto new plants. Rain paired with a steady wind, he explains, is a highly effective delivery system for coffee leaf rust.

There are some ways you can reduce the risk of coffee leaf rust on your farm.

On many farms, there are a lot of different workers, as well as family members, neighbours, and other visitors. It can be hard to control the way that all of these people move through a farm and even more difficult to ensure that they follow defined paths and avoid brushing against plants.

Chris Starry is a fifth-generation coffee producer in Guatemala who co-founded Truth Trading Company. He says, “We can’t force people to walk two or three kilometres out of the way just so they don’t spread leaf rust, because they just don’t care.”

He tells me that on his own farm, he created a formal path for local people who had been taking a shortcut through the plantations, which is bordered with non-coffee trees to create a barrier. Consider whether people are contributing to the spread of disease on your farm and whether planting borders could reduce risk for you.

Workers on a coffee farm in Guatemala. Credit: Teodoro Engelheardt

Some varieties of coffee are more resistant to infection than others. For example, Castillo and Caturra have some tolerance against coffee leaf rust so you may want to consider choosing them if they work well in your climate. But for some producers, disease resistance is less important than other factors.

Chris says, “My grandfather decided to plant Red Bourbon and focus on quality because he thought it was the future, and ever since the cup has been excellent. Bourbon is known to have a great taste, but it is also easily infected with rust.”

Coffee plants that are weak, old, or already affected by other diseases or pests are more likely to be infected with rust.

“Just like people, we’re more vulnerable to sickness when we’re young and when we’re old. The same goes for coffee,” Chris says. “It’s easier for coffee rust to attack and destroy an unhealthy plant than one that’s strong and can fight back. The first plants that will get infected are the ones that are the weakest.”

You should also keep records on outbreaks of leaf rust and the weather conditions at the time. This will help you identify patterns and better prepare for future infections.

Alvaro says, “We recently had an epidemic, and we think it’s bad, but if you back into the newspapers, you see that maybe 20 years ago you had another epidemic happening in the same place. It’s not that something new is happening, it’s more that people forget. That means we must pay attention to the weather conditions [and understand] that sometime in the future we’ll have another epidemic.”

A coffee leaf infected with rust but prevented with fungicide, as evidenced in the dried scarring. Credit: Ivan Petrich

The Importance of Monitoring

Although it may be difficult to prevent infection, you can reduce damage by carefully monitoring your crops, pruning where appropriate, and treating infected plants with fungicide before rust has chance to spread.

Teodoro tells me that he monitors his plants for signs of dormant infection. “We take the leaves and put them into the light and can see all the small spots. If you see that you have a lot of spots, it’s a little more clear than the green of the leaf.”

Alvaro Gaitan explains that “about two weeks after the infection of the leaf by the rust spores, the parasitism on the leaf cells starts to become obvious when you put the leaves into the light. This is because the green pigment of the leaves, the chlorophyll, starts to disappear in those cells and eventually turn yellow. These are the first symptoms of coffee rust. Some days later, these chlorotic spots give place to the first spores, and you can see the fungus on the underside of the leaf.”

Frederico says, “There are no high-tech methods for identifying coffee leaf rust. You have to be on the farms every day walking around and inspecting the plants constantly.”

Some producers use fungicides when they know an outbreak is likely, based on weather patterns, and then prune any visibly infected branches with the aim of keeping infection below 10% of their total crops.

Chris tells me, “It’s rare that we have cases where we have to prune. It’s case by case. We had one plant that was completely orange and different from the rest. We prune or stump the coffee plant. If you stump the plant and leave it there, a person, animal, or bird passes close to it and they might get some rust on them and spread it to the rest of the plants. When something extreme happens on our farm, we cut out the plant and burn it on the spot. That way the rust doesn’t move or spread from that spot.”

Coffee leaf rust is a serious concern with real consequences. By using preventative measures and careful monitoring, you can reduce the chance of infection. But what happens if coffee leaf rust does spread on your farm? In the second part of this two-part series, we’ll take a look at how to handle an outbreak.

Enjoyed this? You may also like Should Coffee Producers Listen to Roasters’ Advice?