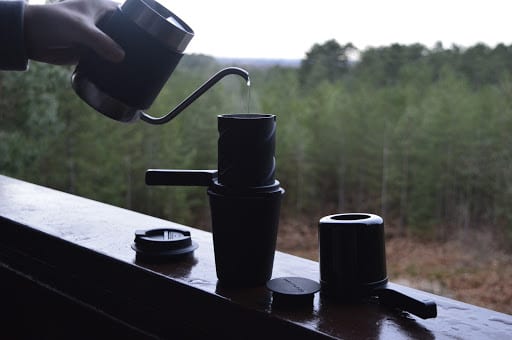 Who doesn’t love a filter coffee? You can make it at home without needing a machine or order it in a cafe. It allows you to savour the complex flavours of a specialty coffee and play with recipes.\Yet there’s more than one way to filter coffee. Each brew method brings with it different nuances in the cup.

We tend to split filter methods into two categories: pour over or drip and immersion. But what are the differences between these two styles?

I reached out to James Gray, the co-founder of Barista & Co., to find out. His team are Kickstarting the Twist Press, a version of the iconic coffee press that users twist rather than press. James shares with me his insights into the two types of filter coffee.

What’s the difference between drip and immersion brewing?

The humble drip coffee is a style characterised by pouring hot water over ground coffee. It allows gravity to draw the water through the coffee bed and filter into a vessel.

It includes devices like Hario V60, Kalita Wave, Chemex, as well as most batch brewers on the market.

However, the term “pour over” does not apply to batch brewers. It only applies to manual drip brewing, where the water is poured by hand onto the ground coffee.

Why do we love drip coffee?

“With gravity-driven coffee, one of the things you can end up with is a very, very complex coffee, which has… a great deal of flavour [and] a lot of depth to it,” says James.

Drip brewing lends itself well to highlighting the complexity of a coffee. It tends to accentuate delicate flavours and aromas. Because the water can extract coffee oils and solubles in its own time, it also allows for greater flavour clarity

Depending on the flavours you want to highlight, different pour over devices can reveal different characteristics, even the same coffee.

For example, the V60 is good for emphasising acidity and floral notes while still letting a decent amount of coffee oils through the thin filter, boosting body. The Chemex, with its thick filter paper, retains more of the beans’ oils and so yields a sparkling brew with complexity. The Kalita Wave, with its flat-bottomed base and three exit holes, tends to suspend the brew for longer with a reduced flow rate, resulting in a more forgiving coffee and a deeper sweetness.

With drip brewing, the extraction of coffee solubles is also a little more efficient than immersion brewing, due to the constant flow of water, as Matt Perger of Barista Hustle explains. In other words, you need marginally less ground coffee per brew.

The actual filter, depending on material and thickness, also traps the resulting coffee oils outside of the brew, yielding a clean-tasting coffee. This makes it a good choice for coffees with highly complex profiles, such as high-quality single origins or ones with a nuanced acidity.

Last but not least, drip brewing devices tend to be relatively easy to clean.

Coffee is brewed with a Chemex.

“The main challenge that you have with this [method of brewing is that] consistency is very difficult,” says James.

In a tool with so much flexibility, human error can cause problems. Bad pour technique, channelling, and temperature instability are common issues that affect drip brews. Beginners can find controlling the rate of pour with a gooseneck kettle difficult, if they have one at all.

Channelling is the result of unevenly distributed grounds; it causes the water to channel through certain sections of the coffee bed, over-extracting there, and not extracting or under-extracting in other sections. The deep angle on some pour over devices, like the Chemex and the V60, makes it more difficult to evenly distribute coffee grounds. This can result in an unbalanced brew with jarring notes.

“You can argue that when you move from certain brands to other brands, you know, the shape of the filters and things like that will aid you in terms of consistency…” James says. “But ultimately… you’re still going to carry a risk of channelling if you don’t know what you’re doing, and then the coffee will be under-extracted.

“So, you can end up with an amazing coffee and then… you do what you think to be exactly the same thing again and it just doesn’t deliver.”

And temperature instability, either due to the material of the pour over device, the size, the shape, or even the choice of pulse pouring over a continuous pour can also negatively affect the taste of your coffee. Ultimately, if the water cools too rapidly, it will change the rate of extraction.

“Pour over control is difficult,” says James. “There are many variables within it and having absolute control can be tricky.”

How does immersion brewing compare?

When it comes to immersion brewing, the key is in the name. The ground coffee is immersed in water and then left to brew until it is appropriately extracted and ready to be consumed. This means that rather than focusing on controlling the pour, brewers need to be thinking about the brew time.

With some immersive brewing methods, like cupping, the coffee grounds are left in the water. When cupping – which is how coffee quality is evaluated – this allows the drinker to taste the coffee at different levels of extraction.

In other immersion methods, the coffee grounds are filtered out. For example, with the French press or Barista & Co.’s Twist Press, this happens when the brewer presses or twists the device.

The Twist Press has two chambers: the main coffee chamber and a top chamber which forms a concentrated pocket of air above the brewing coffee when closed. Both chambers have their own separate handle. When the brewer is ready, they twist the two handles together. Corkscrew grooves on the sides of the main chamber use torsional force to produce an even downward pressure when the handles are twisted to meet, pushing the brewed coffee through a paper filter.

These immersion brewing devices add an additional factor to the brew method: it’s human pressure that forces the liquid coffee through the filter. In turn, this pressure can allow for a finer grind size and shorter brewing time.

Other immersion brewing methods allow gravity, rather than human pressure, to start the filtering process. The BrewThru Coffee Dripper, for example, resembles the traditional V-shaped funnel of most pour over devices. However, it has a valve located near the base of the funnel.

This valve allows users to control the steep time like a traditional immersion brew as well as the rate of flow when the valve is released. It may look like a pour over device, but it also borrows from the immersion brewing process.

Depending on the device, immersion brewing can be perceived as less fiddly than drip brewing. There is less need to monitor the process from start to finish, which is ideal if you prefer a simple brew method along with more easily achieved consistency.

Generally speaking, immersion brewing results in a bolder coffee profile with greater body. And for those who like the taste of immersion brewing but are less fond of the heavy mouthfeel, bypassing is an option.

This is the process of adding water to a concentrated brew; in essence, it dilutes the beverage. It’s the same process, in fact, as making an Americano.

James, for example, recommends bypassing a coffee concentrate as an option with the Twist Press, which he says produces “a very clean body… with rich texture and body”.

He feels that bypassing is intuitive even for most beginner brewers. “If you’re trying to introduce people into [the world of specialty coffee], confidence is generally a thing they don’t have,” he says. But bypassing is a forgiving method.

“We’ve actually found that using the bypass – or in layman’s terms, by diluting down the coffee – and reducing the TDS, even if you’re brewing for two people at home, for example… you can… get two really well-balanced, great cups of coffee out of it.”

This brewing method has a less glamorous reputation than the pour over – but is it deserved? While not synonymous with immersion brewing, the most high-profile device is the French press, which works well with a coarse grind and subsequently longer contact time.

Unfortunately, many people over-extract their French press by failing to decant it immediately after plunging. However, it seems unfair to blame the device for our errors. Additionally, experimenting with a finer grind on the French press can also result in better extraction and flavour.

Some people consider immersion brewing to have too much mouthfeel. Most mainstream coffee presses are made with metal mesh filters between 80-300 microns. They don’t trap coffee oils and sediment as effectively, resulting in a heightened perception of the coffee’s bitterness.

“You can only use a certain micron level filter with a press, because it’s very difficult to plunge if it’s the wrong level. That’s certainly a negative with a standard immersion,” says James.

In addition, with French presses, it helps if you are not in a rush and have more time to spare for cleaning the device.

“When we’ve done research with consumers, we find that very few people use coffee presses during the week. It’s almost like they think they have more time in the weekend. ‘I’m going to sit and have a press coffee, read the paper,’ and then… often the coffee press gets left on the side unclean. I mean, we’re all guilty of it, you know.” James laughs. “I think there are certain negatives, just from a usability point of view.”

Finally, James argues that traditional presses with a downward pressure rather than a circular or sideways one result in less stability and consistency in the way we press our coffee.

“When you’re going in from side to side, it gives you stability. If you’ve got downward pressure on something, obviously you’re putting the pressure through the vessel as well as the product brewing, so… less stability,” he says.

Immersion vs drip coffee: one is known for its rich, bold taste and full body; the other for its cleanness, complexity, and highlighted acidity.

And then you have those brewing methods that borrow from both technologies, allowing for a clean cup with a bold taste, for example.

But does this mean that certain coffees pair better with certain brew methods? Should a high-acidity single origin always be brewed as a pour over, for example? Or is it simply a matter of personal preference?

“I think to say that there’s one type of coffee for any type of brewing method in my mind is wrong,” James tells me. “I think it’s more about you finding the one that’s right for you.”

Please note: This article has been sponsored by Barista & Co. Their newest product, the Twist Press, is currently live on Kickstarter and can be backed here.

Coffee specialist at Alpro, coffee journalist who has written for global coffee magazines, and founder of the Kore Directive, U.K.

Why Do Coffee Geeks Need So Many Toys?
Grinding for espresso at home
Coffee Brew Ratios: What You Need to Know
Discovering The History of The Espresso Machine at MUMAC, Italy