Perfect Daily Grind > Roasting Fundamentals > What is roasting airflow & how can you control it? 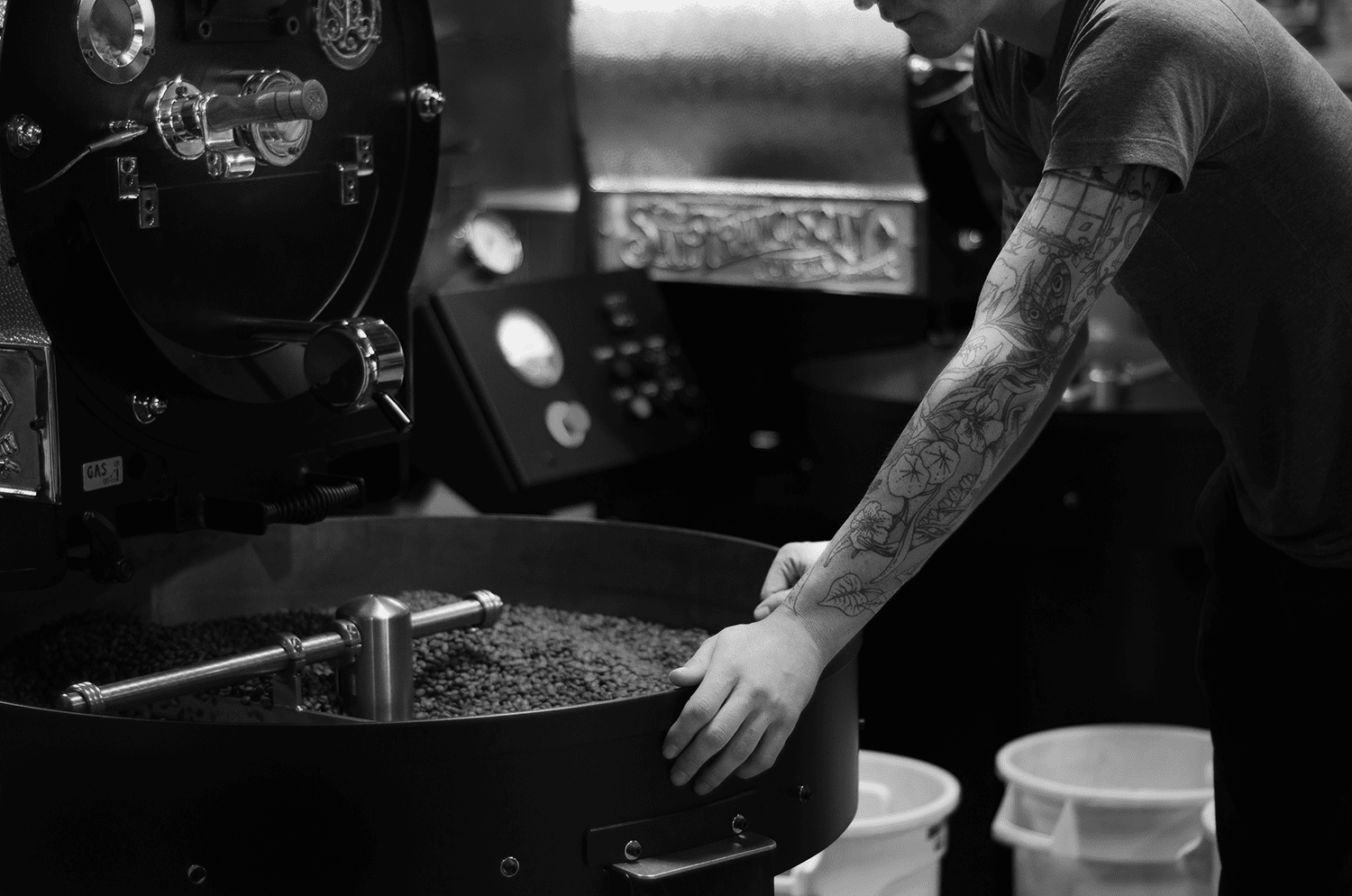 Coffee roasting: it all comes down to heat. But did you know that the majority of the heat transferred during roasting is due to airflow? That’s according to Don Cox of Bald Guy Brew and The Coffee Roasting Institute.

I reached out to several roasting professionals, including Bill Kennedy, Founder of coffee roaster manufacturer The San Franciscan Roaster Co., to ask: What is airflow? How does airflow affect coffee roasting? And how can coffee roasters manipulate this tricky variable for better roasts?

Read on to discover their answers.

Bill tells me that airflow involves the roasting system’s movement and how air impacts what’s going on within the system.

It may be simple, but it opens up a world of opportunity. A roasting machine will always have some degree of airflow, especially because heat causes air movement. However, you can also change the airflow during the roast.

So, why would you want to vary airflow? Because airflow is a key component in the roasting process.

The relationship between airflow & heat

Let’s quickly revisit middle school science: energy in the form of heat can be transferred by conduction, convection, and radiation.

In roasting, conduction is what happens when the coffee beans are being heated directly by the metal of the drum. Heat passes from one solid to another. Convection, on the other hand, is the heat transfer caused by airflow.

Don tells me, “Airflow is one of the key mechanisms by which taste, aroma, and color are developed by air through the roast… Air is critical for heat transfer, for the combustion of gas, and it is critical for the development of the coffee.”

That being said, airflow isn’t just about heat: Bill reminds me that airflow also removes chaff and small particles from the beans during roasting.

However, playing with airflow is a key part of controlling a roast. “Changing those ratios between conductive and convective [heat transfer], that is where the craft roaster changes the outcome,” Bill says.

What is the impact of airflow on flavor?

Roasting needs both conductive and convective heat transfer. They complement each other – especially when it comes to flavor.

There is no singular “right way” for anything in coffee roasting: not for charge temperature, not for roast time, and certainly not for airflow. Everything varies depending on the beans, the machine, and the roaster’s vision for this coffee.

In other words, we can’t say “you should always have an airflow between X and Y”. However, there are certain guides that can help roasters work out when the airflow was too low or too high for this particular coffee in this particular machine with this particular roast goal.

When there’s not enough airflow…

Dave Farfara of Shenandoah Joe in Charlottesville, USA, tells me that when the airflow is too low, there isn’t enough convection-based energy transfer. Roasters may see this in the form of low temperatures. And the result of this temperatures is baked coffee – beans with a dough-like profile where they spent too long slowly cooking in the roaster.

Don agrees, advising, “Too little airflow – which could be the result of poor maintenance or a fan that is underpowered to produce the necessary cubic feet per minute (CFM), a measurement of the velocity at which air flows into or out of a space – can result in a ‘muted’ acidity… an acidity with no character or that’s flat.”

But it’s not just about the coffee’s development. Bill says, “If you don’t have good airflow… you are not removing the impurities that you don’t want… These impurities can potentially burn and become ash on a microscopic level inside the drum, which will eventually give a kind of ashy flavor to your beans, even if they have a beautiful looking roasted appearance.”

Michael McIntyre of Catalyst Coffee Consulting agrees with him. “Not enough air movement and the batch will not have good cup clarity. In that case, the coffee will likely have a carbon quality from not effectively removing the exhaust.”

When there’s too much airflow…

On the other hand, if airflow is too high, the beans tend to heat too quickly. Michael warns that this can lead to tipping, where the edges of the beans become scorched. Due to the intense heat, the outside of the bean burns before the inside has an opportunity to develop.

Even if the roaster avoids tipping, the impact can still be tasted in the cup. Don says, “Generally speaking, an excessive amount of airflow will cause sourness due to the shortened roast.”

So far, we’ve been talking about airflow as if it were one simple thing. Unfortunately, it’s not that easy. The heat transfer during roasting is affected by the temperature, velocity, and pressure of the air.

Bill says, “The temperature of the air is important but the velocity of the air going by is also important, and the greatest risk…”

In other words, oversimplify airflow at your peril.

Yet while airflow velocity is important, you might find yourself relying on pressure measurements instead. “Testing airflow velocity is difficult because, whether there is an airflow meter or something like that, smoke and oils can obstruct those devices,” Bill explains. “Pressure and velocity have a direct correlation to each other, so the best next thing is to use the pressure gauge, like a Magnehelic.”

In other words, you control the velocity but do this based on the pressure readings. “The more of the negative pressure you experience… means higher velocity,” Bill explains.

While this might seem complicated at first, it will get easier with time. “Your mind will start making associations between the dial setting on the Magnehelic, which you will notice in your software, and ultimately your time and temperature benchmarks, with your nodes of your pressures settings,” Bill reassures me.

A roaster releases beans so that they can cool. Credit: The San Franciscan Roasting Co

How to control airflow

It’s one thing to understand what airflow velocity is and the impact of it. But how do you control it? Michael recommends adjusting the dampener or variable fan at critical points in the roast.

He adds that some roasters prefer to use the full airflow and adjust other variables, such as the gas pressure or flame application.

As an additional tip, he recommends keeping the batch size at 50–60% of the drum capacity “if you find that your roaster does not promote good air movement.”

But remember, you don’t want the same amount of airflow at all stages of the roast.

Varying airflow throughout the roast

Bill says, “If you have too much convective heat [airflow] at the beginning of the roast, you are removing moisture too quickly, in my opinion. We want the drying to happen [but] we don’t want the beans to become so dry that we lose flavor notes.”

Don agrees. “In the beginning of the roast, you want to have less air so you can let the heat into the bean for an endothermic reaction (the energy being absorbed in the form of heat), because we need the Maillard reaction to happen, we need the Strecker to develop, we need pyrolysis to occur.”

When yellowing begins, it’s time to adjust the airflow. “We need to help the bean out,” Don says, “because, at this point, we know that dehydration is occurring. So, we open the air so that it helps to strip the free water molecules off of [the coffee].”

And Michael reminds me of the importance of airflow on the end temperature. “A machine that has more airflow control can reach a desired mass loss at a lower end temp than one lacking that control/efficiency.”

But controlling airflow isn’t just about following a set pattern. As Michael says, “Just as you would adjust the flame, and even the drum speed, for different coffees such as Pacamara, Maragogype, peaberries, naturals and lower-density coffees, it is equally important to observe airflow.”

So, how would he adjust the airflow for these? He takes the example of natural processed coffees. “I tend to prefer less airflow through the drying phase on naturals, gradually increasing airflow going into the post-first-crack phase.”

“I think the fruit and sugars in naturals are enhanced by promoting better conductive heat,” Michael continues. “However, you also have to be a bit more aggressive with airflow through the later portions of the roast, because naturals can become easily muddled through poor exhausting.”

Even here, though, there is room for experimentation. “It is also not a one-size-fits-all rule,” Michael stresses. “Coffee always surprises us.”

Airflow: it’s key to roasting. And while it might seem simple – more airflow means more convection heat and better clarity – mastering this is as challenging as every other element of coffee roasting. How much airflow should you use for that high-altitude natural coffee with great sweetness? How quickly should you increase airflow during drying for that washed Colombian?

But the more we experiment with coffee roasting, the more we discover. And that is one of the most exciting things about this craft.

So, play with airflow. Try different profiles with the same coffee and the same profile with different coffees. Take notes, evaluate and, most of all, have fun.

Found this useful? Check out A Roaster’s Guide to Creating Coffee Blends

Please note: This article has been sponsored by The San Franciscan Roasting Co.

How to Home Roast Coffee: Popcorn Maker Air Popper Style
In Defense of Blends: Coffee’s Most Underrated Offering
A Guide to Achieving Consistency in Coffee Roasting
A Guide to Different Heat Types in Roasting Equipment