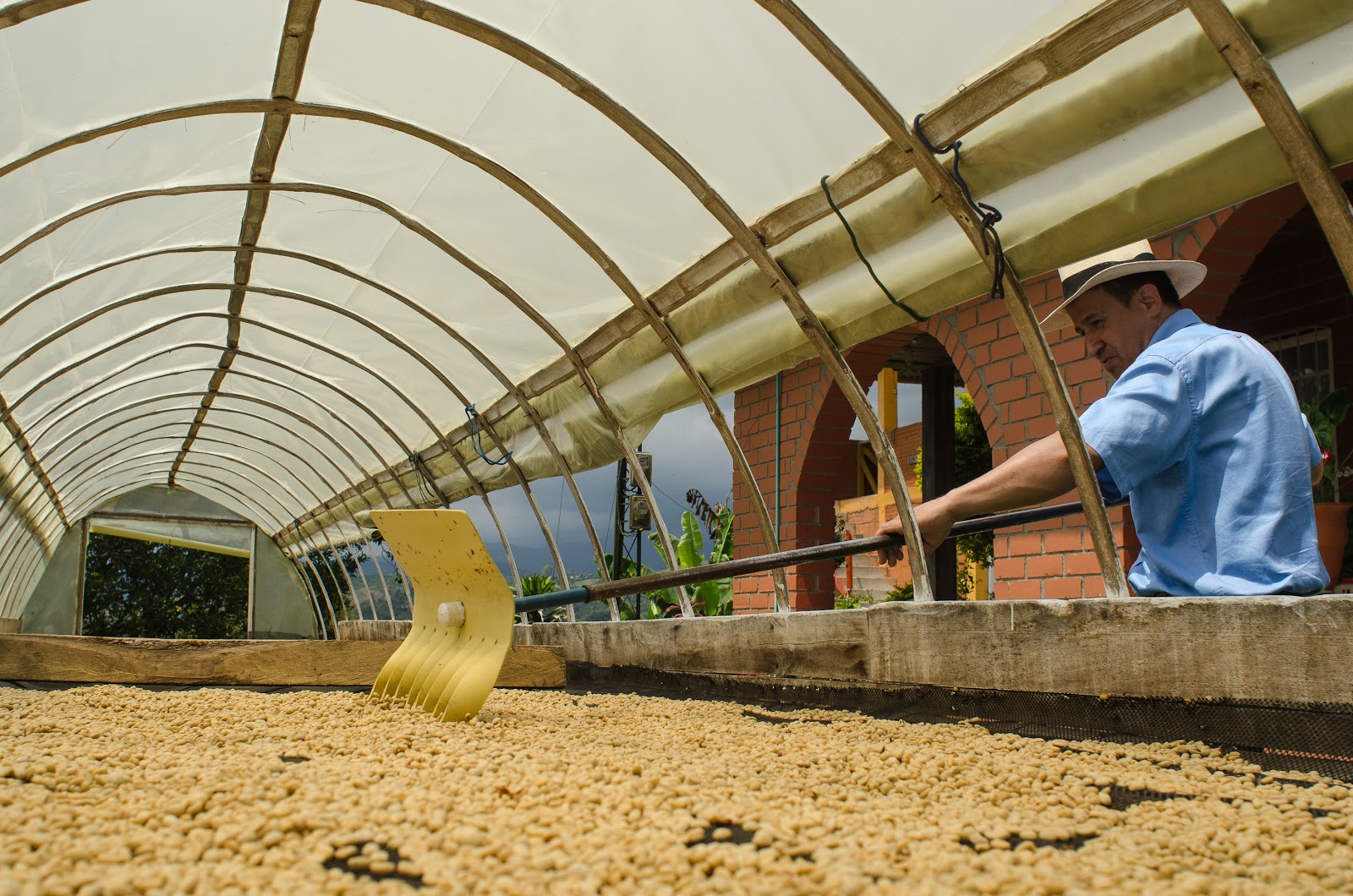 You stand in the coffee shop, looking at a bag of coffee beans: “Light-medium roast, washed, Colombian Nariño,” says the package.

But if “Colombian Nariño” is the origin, and “light-medium roast” is how dark it’s been roasted, what does “washed” mean? How does it affect the flavour of your coffee? What’s the difference between this and a natural or honey coffee?

And finally, why do so many baristas and specialty coffee lovers continue to adore washed coffee (or, as it’s sometimes called, “wet coffee”)?

What Is Coffee Processing?

The word “processed” has a bad name in today’s world, especially in the food and beverages industry. We’re used to associating it with chemicals, ready meals, and factories. Yet in coffee, this couldn’t be further from the truth.

The coffee beans we brew and drink every day are the seeds of a small, bright berry referred to as the coffee cherry. Two seeds lie inside each cherry (unless it’s a peaberry: a cherry where the seeds didn’t separate and so you have one large, round one).

This means that, in order to make a cup of coffee, the first thing we need to do after harvesting is remove the seeds from the fruit – but that’s something easier said than done.

Each coffee fruit is made up of several layers: the outer skin (pulp) or exocarp; the mucilage or mesocarp, a silky, sticky layer that’s responsible for much of the coffee’s sweetness; a papery layer or endocarp called parchment; and the silverskin, a membrane which covers the two seeds.

Coffee processing is the removal of these layers of fruit. There are several ways to do it, all with a different impact on the flavour of the coffee.

What Is Washed (Or Wet) Coffee Processing?

Between harvesting and storage/export, there are two main things that need to happen: the fruit needs to be removed and the beans need to be dried to an appropriate level. The main differences between how coffees are processed lies in the order this happens in.

But as Carlos Oliveros, Principal Investigator at Cenicafé, the research centre of Colombia’s national coffee association Café de Colombia, tells me, “A washed coffee is a coffee which has had various fruit layers removed before drying begins. We have removed the skin, we have removed the mucilage.” Only the parchment and the silverskin remain.

George Howell, Founder of George Howell Coffee and one of the earliest proponents of the specialty coffee movement, agrees and stresses the use of water to achieve this. “Traditionally, a washed coffee has employed water mainly to wash off mucilage after the coffee has been fermented over time with turbulent water. The mucilage comes off and then the coffee is dried.

But that’s the technical difference. Now it’s time for the really important question: what does a washed coffee taste like? And why?

The Flavour of a Washed Coffee

There’s a reason why one of the words most often used to describe a washed coffee is “clean”.

As George Howell says, other processing types, notably natural and honey, “add body and often a fruity flavour to the coffees… [creating] a dramatically different flavour profile than a washed coffee”.

This is because of the mucilage that’s left around the beans. The fruity sugars and other compounds ferment, having an impact on the bean. But in washed processing, all of that has already been removed.

And Pil Hoon Seu, Owner and Green Bean Buyer at Coffee Libre in South Korea, stresses that “the washed process is a method of focusing on the bean itself”.

In other words, with a washed coffee, you are tasting the coffee itself – the origin, the coffee variety, the terroir – and not the impact of the processing method.

George Howell tells me, “What I love about washed coffees is that they can have pure intrinsic flavours from the bean, if the washing is done properly…

“[There are] intrinsic flavours that are dependent on the variety of coffee but also on the terroir. A bright example of that, for me, is how different Caturra is when it is in Colombia versus Central America. They have dramatically different flavour profiles.”

And finally, washed coffees are often consistent. With natural and honey processed coffees, it’s harder to predict the final cup profile (for this reason, they require strict quality control). This is because the fermentation continues within the coffee fruit during the drying phase, which can last for a long time. With washed coffees, all the fermentation happens at the beginning and so is easier to control.

So, we know that the fruit is removed before drying begins. However, washed processing is far more complex than this. Let’s take a look at the method.

After the coffee cherries are picked, specialty producers will begin sorting them. This is the process of removing any defective or unripe cherries.

Carlos Oliveros tells me about the process Café de Colombia recommends producers use. The first step, he says, is to put all the cherries in water and remove any floaters.

“Higher-quality coffees are denser than water,” he says. In contrast, defective cherries have poorly formed seeds, creating air gaps. This means they float.

“So, the cherries that float in the water normally tend to be defective. It could be because of damage by the coffee berry borer [a common coffee pest]; it could be something that happened on the farm that prevented the coffee from fully ripening.”

Since they are of a different quality, Carlos recommends that the two lots of cherries are processed and then sold separately, at different prices and to different markets.

The next stage is to remove the pulp, or the skin of the cherry. A machine called a depulper can be used to do this. Carlos also tells me, “It’s very important to put the coffee through a sieve.” Not all the coffee cherries will have been sufficiently depulped by the depulper, he stresses.

Bags of coffee cherries are emptied into a depulper. Credit: Café de Colombia

Next, it’s time to ferment the coffee beans. Carlos and Gloria tell me that, traditionally, coffee is fermented in tanks; Gloria tells me that it usually takes 18 to 24 hours, depending on the temperature and coffee value. During this time, the microorganisms in the beans create the enzymes responsible for breaking down the mucilage.

However, there are other options for producers. One of the biggest criticisms of washed processing is its high water usage. Not only is this an issue in places with water shortages, but poor disposal of the wastewater can result in chemicals entering local waterways. This has led coffee associations and equipment manufacturers to invest in finding ways to achieve the effect of washed processing without the environmental cost.

Carlos and Gloria tell me about two of these options:

On the other hand, some countries have slightly different fermentation methods. Pil reminds me that, in Kenya, a process called double fermentation is common. This means the beans are soaked in water a second time, resulting in greater water usage but very clean coffee.

The final stage is the drying one, but producers can’t relax yet. “Drying is a high-risk operation, where we have a product extremely vulnerable to damage by microorganisms,” Carlos says, “as well as its own physical deterioration.”

He tells me that smaller farms often dry the coffee under the sun while larger ones may use mechanical driers. “We also see, at some farms, a combination of the two. That is to say that producers dry the coffee in the sun and then, after one or two days, they dry it mechanically. In this way, they achieve a product of very good quality with a reduced energy and fuel use and costs.”

Washed processing is one of the most common, and popular, types of processing in the coffee industry – and for good reason. Washed coffees are clean: they allow you to taste all the delicious flavours of the origin and variety, from a sparkling acidity to that hint of sweetness or a floral aroma.

So, when you see a washed coffee in a café, try ordering it. Give it a sip and enjoy the taste of those notes of origin.

Interview with Carlos Oliveros conducted in Spanish and translated into English.

Please note: This article has been sponsored by Café de Colombia