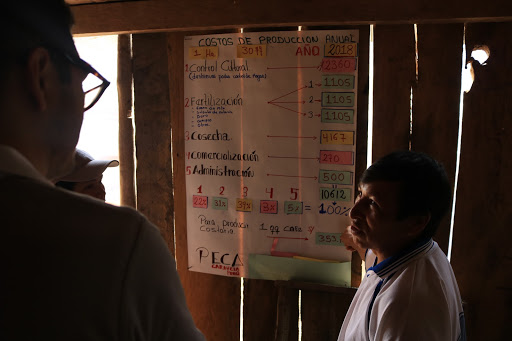 With coffee prices falling to a 12-year low earlier this year, the economic sustainability of coffee has been left in more doubt than ever. We are facing the questions: Is coffee farming profitable? How much should a producer be earning? And what separates a profitable farm from an unprofitable one?

Last year, US-based green coffee importers Caravela Coffee published a report on the costs of production in the six Latin American countries they operate in. Following on from this, the company recently calculated the theoretical profitability of a farmer in those countries and contrasted that with the World Bank’s international poverty line.

Alejandro Cadena, Caravela Coffee’s CEO, recently presented his findings at Sustainability in Coffee in Portugal. So, I reached out to him to discuss his findings.

Ivan Rengifo with producers at work in the coffee warehouse. Credit: Caravela Coffee

Why Farming Profitability Should Concern Us All

Let’s first understand why this study is important.

Low prices are not a new concern: for years, farmers have been abandoning coffee, describing it as unprofitable and unsustainable. But in August, the international coffee price (the C-price) fell below US $1 per pound. The following month, it reached its lowest level in 12 years.

Yet according to World Coffee Research, despite the falling prices, the demand for coffee is predicted to rise constantly. If things continue as they are, and the impact of climate change is also taken into account, then we can expect to see a production gap of between 60 and 122 million bags by 2050.

Will there be enough coffee in the future to satisfy our growing demand? One thing is clear: if we want the coffee industry to thrive, we need to improve farming profitability.

However, this study gives us insight into the hypothetical profitability of an average coffee farm across six Latin American countries – and if coffee isn’t profitable for the average farm in one of the world’s richest coffee-producing regions, then we face a serious issue.

As part of the study, Caravela Coffee had to make a few assumptions:

The C-price and its fluctuations from 2010 to 2018. Credit: Caravela Coffee

Caravela Coffee previously found that “three hectares is what a family needs to survive.” However, having three categories allows for a discussion of the relationship between productivity, size, and profitability. There is an ongoing debate over whether greater productivity is the key to farm profitability. While these scenarios will not provide a definitive answer to that, they do provide useful insights into the minimum farm size and productivity levels required to bring a family out of poverty.

From there, Caravela Coffee compared the hypothetical profits to the World Bank’s international poverty line.

A producer in front of his coffee. Credit: Caravela Coffee

How Much Profit Does a Coffee Farm Make?

Thanks to a fluctuating C-price, we see a lot of variation in the results. The average profit margin for the past eight years is 24%. Worryingly, however, it fell dramatically in 2012 and recovered briefly in 2013, only to decrease again in 2013. Profit levels have been in decline since 2014 and, in some scenarios, even hit negative numbers as we entered 2018.

But what does a 24% profit margin really look like?

A producer with a one-hectare farm producing just five bags per year would, over the course of the last eight years, have made an average US $21 in profit from their total income of US $86. Annually, this would add up to US $247.

The average earnings per month and year for a coffee producer with a one-hectare farm producing five bags per year. Credit: Caravela Coffee

Our second scenario takes the first farm and merely scales it up, from one hectare to three, resulting in an annual harvest of 15 bags. And so, on average, a producer would see US $62 profit a month, or an annual US $742.

The average earnings per month and year for a coffee producer with a three-hectare farm producing 15 bags per year. Credit: Caravela Coffee

A farm of this size and productivity level would harvest 45 bags a year. This represents an annual profit of US $2,227, or US $185 per month.

The average earnings per month and year for a coffee producer with a three-hectare farm producing 45 bags per year. Credit: Caravela Coffee

Caravela Coffee then looked at the World Bank international poverty line, which is currently set at US $1.90 per person per day. This means that anyone that lives with a daily income below this is considered to live in “extreme poverty.”

This poverty line does not consider the varying costs of living across the world. Instead, it is based on the purchasing power in 2015 in 15 countries that, back in 2005, were the world’s poorest countries. However, the line is a significant point of comparison. It can help us put a numerical aspect to our discussions of economic sustainability.

So, Caravela Coffee multiplied the US $1.90 by thirty to calculate that producers needed a monthly US $57 of profit per person in their household to not be living in “extreme poverty.”

Given the difficulty in assuming household size, Caravela Coffee only looked at whether a farm profited enough for one producer to not be living in poverty. It’s worth remembering that these numbers will need to be doubled, tripled, quadruped, or even more for larger families with no other source of income.

So, under this scenario, do coffee producers live in extreme poverty? The answer: it depends on the farm size and productivity.

Farmers with one-hectare farms and a productivity of five bags per hectare, selling coffee at the global market price, would be living far below the World Bank international poverty line. At US $21 per month, they would need to more than double this to escape extreme poverty.

Alejandro tells me that “if you have a one-hectare farm, and just have five bags per hectare, the price that you need per hectare would be extremely high” if you wanted to earn as much as a farmer producing 45 bags over three hectares. In fact, the first farmer would need to sell their coffee at US $14/lb.

In comparison, a farmer with a three-hectare farm and the same productivity level of five bags per hectare would need to sell their coffee at “just” US $4.70/lb to make the same as a farmer with three hectares and an annual productivity of 15 bags. Unfortunately, this is still significantly more than the C price and, indeed, the price paid by many specialty coffee roasters and buyers.

If, however, a farmer with three-hectares were to increase their productivity to 15 bags per hectare, they would earn 3.21 times more than the poverty line. They would need US $1.57/lb to escape “extreme poverty.”

What If Their Coffee Was Sold at Higher Prices?

Finally, let’s assume that the producer is not selling money at the C-market price. Let’s say that contracts are being signed at US $1/lb more than the global market rate – US $2.40/lb.

Alejandro tells me that when you are able to guarantee a sustainable price, this is where the scale and productivity have the biggest impact.

At US $2.40/lb, the smallholder farmer with just one hectare can also live above the World Bank international poverty line (assuming, of course, that they are not supporting other family members who don’t have their own sources of income).

And if a farmer has a three-hectare farm and good productivity, they can begin to build a truly profitable business – the kind that doesn’t just enable them to live above the poverty line but also invest in their business, support a family, and more.

Alejandro tells me that this shows the “effect of scale and how scale can really make the difference, and that’s what we really need to focus on….

“It’s a path… We want farmers to understand that this path starts with being as productive as you can, then working on quality so that you can get a higher price, and if you get both productivity and higher price, then you are entering this path of real growth and real sustainability.”

What Does This Mean For The Coffee Industry?

Based on Caravela Coffee’s findings, I asked Alejandro what we can do as an industry. Here are his recommendations:

If you’re a producer:

If you’re a consumer:

Most importantly, we all need to start treating farm profitability as an issue that needs resolving. And key to resolving it is creating parameters, understanding coffee pricing, and putting a number to the question of what a coffee producer should earn.

Because we cannot shrug off coffee farm profitability as “unfixable,” or treat it as an abstract matter. The situation is far too real for that. No, it’s time we start looking for concrete solutions and setting tangible goals.

Please note: This article has been sponsored by Caravela Coffee.

Sunghee is the co-founder and CEO of Bean Voyage, a feminist organization co-creating a coffee value chain that works for all.

Why One Cooperative Is Exporting Roasted Coffee
Pricing Coffee: Why Do Yemeni Beans Cost More?
Meet The People Spreading Specialty Production in Mexico
Galápagos Island Coffee: Why Altitude Isn’t Everything