Perfect Daily Grind > Barista > What is a flat white & how is it different from a latte? 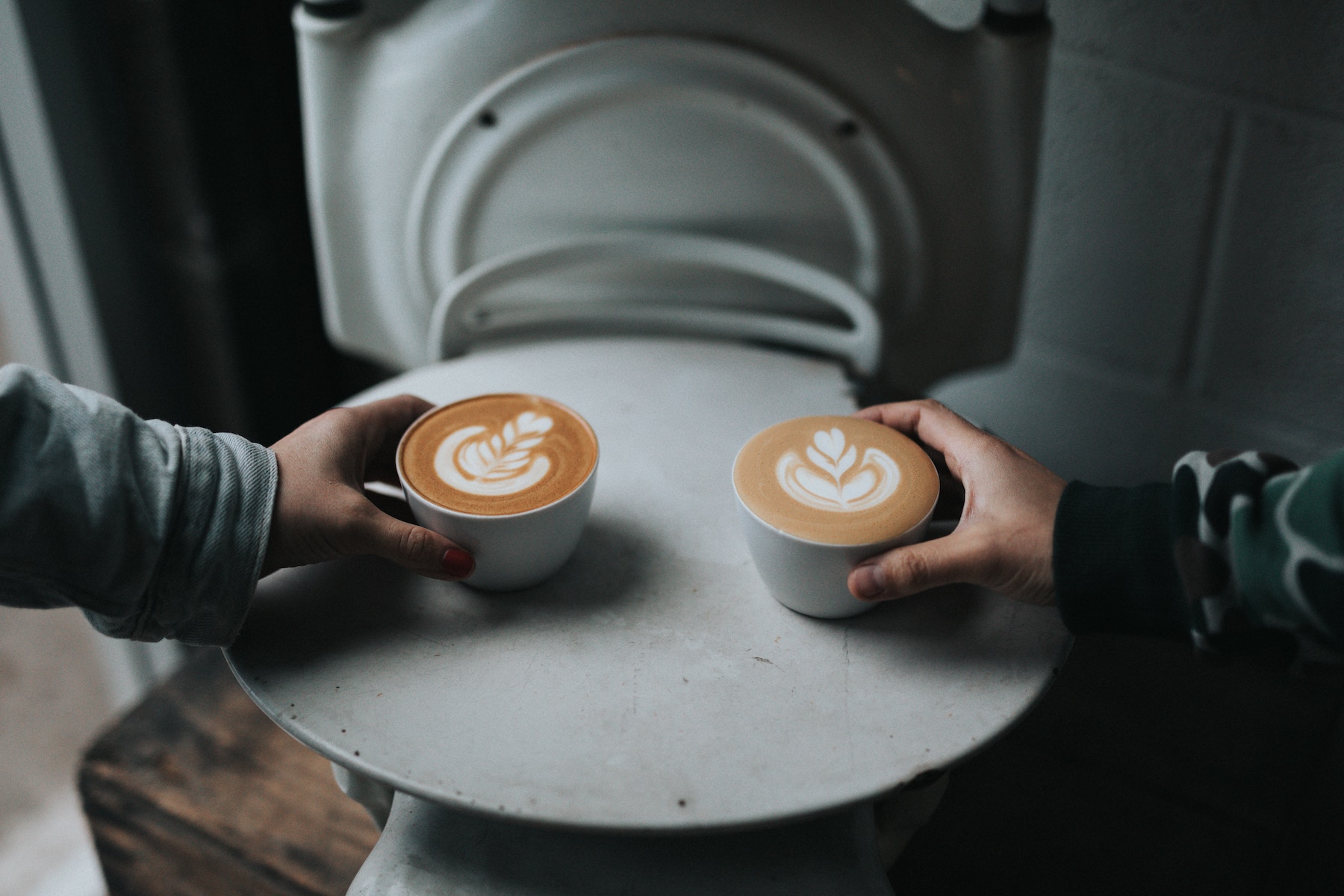 Flat whites have been on specialty coffee shop menus around the world for a while. But do you really know what one is? And what is the difference between a flat white and a latte?

Let’s take a look at the history of the drink, how to make one, and what sets it apart from a latte or cappuccino.

You may also like our article on what a latte is and why it’s so popular.

What Is A Flat White?

A flat white is an espresso-based drink that contains steamed milk. That much is probably already obvious.

It is a no-nonsense option for those looking for a dairy beverage with a strong taste of coffee and is made with a small amount of steamed milk and a thin layer of microfoam.

If you want a coffee that allows you to strongly taste the espresso but with the creamy mouthfeel of steamed milk, it’s a great choice. But where did it come from and what sets it apart from a latte?

Learn more about how coffee culture is changing here.

Steamed milk is an essential part of the flat white. Credit: Coffee and I

The Origins of The Flat White

There is some debate about whether the flat white originated in Australia or New Zealand. Either way, it has been around down under since the 1980s. In the years since, it has popped up on menus in the US, UK, and elsewhere and is now a specialty café standard.

Ben Bicknell is Strategic Projects Manager at Five Senses Coffee in Melbourne. He says, “Without digging deep into the history of Australia and New Zealand, I would say that it naturally evolved in both places.”

“Consumers transitioning from instant coffee to espresso-based coffee were seeking something familiar rather than cappuccino, which at the time had mountainous sea-foam peaks, and so asked for it ‘flat’. The actually drink has evolved to be ‘flatter’ than a cappuccino (which has also been scaled back to more delicious micro-foam).”

When Starbucks began to serve flat whites as a “bold” alternative to latte in the USA, it became clear that the drink had entered the mainstream.

Learn more in this article on the history of the flat white.

Both lattes and flat whites have enough foam to be creative. Credit: Coffee and I

Understanding The Cappuccino vs. The Latte

So we know that the flat white is an espresso with steamed milk and little foam. Isn’t that a latte? Or a cappuccino?

The term latte started to be used in English in the 1980s, but the concept of a coffee with warm milk has been around for much longer. In Italy, a caffè latte is usually a very milky breakfast drink made with a shot of coffee from a stovetop espresso maker.

Elsewhere, the name now generally means a shot of espresso topped with steamed milk and a layer of foamed milk on top.

And to clear up any confusion with a cappuccino, the general rule is that a cappuccino is a smaller, stronger drink. A cappuccino is made with one shot of espresso and served with a thick layer of milk foam. Traditionally, a latte is larger and has a milder coffee to milk ratio. It is served with just a little foam.

You may also like this article on how milk foaming is evolving.

A flat white with thin layer of microfoam.

What’s The Difference Between A Flat White & A Latte?

Ben tells me that “in Australia, generally the latte is served in a 200 ml glass. A 180 ml ceramic cup is used for a flat white, so it’s a little less dilute. Historically, the latte would have slightly more foam (~1 cm) than the flat white (~0.5 cm).

“However, over the past ten or so years (from 2012 to 2022), this has changed. Now, the difference in foam has almost been discarded and they’re delivered the same way.”

Read this article to learn more about the history of latte art.

But Ben’s experience is not the definitive rule. Every coffee shop serves the drink slightly differently, so it’s easy to see where the confusion has emerged.

You can make cappuccinos and lattes with one or two shots of espresso, but a flat white traditionally features two. However, even this has become optional. To complicate things further, some baristas use a double ristretto to create a stronger coffee flavour.

There are different opinions on what a flat white is. Credit: Nate Dumlao

Different Understandings of The Drink

What makes a flat white can depend on where you are and the individual barista. Jonathan Prestidge is the Managing Director at Repack Espresso in Bath, UK. He tells me that the difference between a latte and a flat white is the milk to coffee ratio.

“The texture of the milk is very similar in both drinks: enough aeration to pour latte art, but not so much that it’s frothy. In terms of ratio, I served flat whites in 5 oz cups in my old shop and lattes in 8 oz cups. Both were made with double shots. I don’t think you can call a flat white a flat white if it’s larger than 6 oz – it’s a latte then.”

Felipe Cisneros is the owner of Traviesa Coffee in Quito, Ecuador. He suggests that context is a factor as much as personal barista preference.

Ceiran Trigg was the director of Ancestors Coffee in Norwich, UK, which closed in 2022. He says, “[A flat white is] 5–6 oz with a double shot of espresso. Very thinly textured milk… flat, flat milk. A latte is 7–9 oz, pushing it to 10, and has milk texture between that of a flat white and cappuccino.”

Which Is Better? Flat White vs. Latte

So the specific size of cup and ratio of coffee to milk may vary, but the general consensus is that a flat white is smaller than a latte and usually contains more espresso.

If you enjoy the nuanced flavours of specialty coffee but want something dairy-based, a flat white could be a better option than a latte. Because it has less milk, a flat white will allow you to more fully experience the sensorial profile of the beans. But is it objectively better? No. There are many ways to experience specialty coffee and we each have a personal preference.

A flat white combines the flavour and intensity of an espresso with the rich mouthfeel of a dairy-based drink. Not into dairy? Plant-based alternatives tend to foam less easily than dairy, so they can work well with flat whites.

How does the cappuccino fit into the picture? Read this article from 2021 to learn the answer, and about how cappuccinos vary around the world!

Understanding what a flat white is can help when we place an order, but if you’re particular about the details and unfamiliar with the cafe, it might be worth asking a barista how they make their flat white.

Ben says that what a flat white is is less important than other questions. “The more important question is ‘do coffee drinkers appreciate 80+ specialty coffee in their lattes and flat whites? And are they willing to pay a sustainable price for it?” he says.