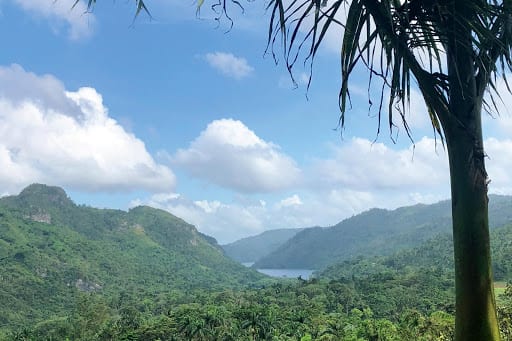 Cuba, the country of cigars, politics, salsa… and coffee. Some of us may have enjoyed a sweet, heavy-bodied café cubano, but how many of us have actually tasted Cuban coffee? And by that I mean one grown in the country’s fertile soil by its hard-working farmers.

Cuba’s coffee industry was hit hard by nationalisation and the 1960 US trade embargo. Because of this, the Western world has been largely unaware of what Cuban coffee production looks like for generations. Many coffee consumers have never had a chance to taste Cuban beans.

A trip to Cuba’s coffee farms gave me a chance to sample some beans, and taught me more than I could have imagined. Take a look at the life of Cuban coffee producers and the daily difficulties they face.

A Cuban cigar and an espresso. Credit: Raúl Argáez Uribe

Cuba has a unique connection with coffee that is directly linked to the Caribbean island’s political history.

The plant was introduced by Jose Antonio Gelabert in the 18th century. French colonists later brought their own production methods and by the time of the Cuban revolution in 1959 the country was a major global exporter.

The political context and nationalisation of the industry led to much-reduced production. Today, Japan and France are Cuba’s major markets. All coffee from Cuba is exported by Cubaexport, which pays a government-regulated price to coffee growers and processors.

Even the local love of a hot cup is regulated. Alongside other rationining, domestic coffee consumption is restricted to two ounces per adult every two weeks. The limit was imposed to maintain coffee exports and generate income.

A coffee cherry and beans at a Cuban coffee plantation.

A few days in Havana gave me an immersive introduction to Cuban life, including the importance of coffee in the daily routine.

The first time I tried a Cuban coffee was back home in Australia. I was intrigued. The Peaberry beans from Guantanamo had smoky notes of tobacco, spice, hazelnut, dark chocolate, and hints of leather. It put a smile on my face and piqued my interest about its origin.

In Havana, coffee is served differently: usually as an espresso with brown sugar. Rationing has led to the creation of café con chícharo, a mix of coffee and toasted chickpeas that stretches a small amount of coffee further.

But the drink is secondary to the social interactions it fosters. Friends, colleagues, and neighbours gather over small cups of coffee on a daily basis and the drink is an integral part of Cuban culture.

Cuban coffee is grown in three regions – the Sierra Maestra mountains in the east, Pinar del Rio in the west, and Escambray in the central part of the island. The majority of coffee grown for export comes from Sierra Maestra and that used for domestic consumption is mainly from the Escambray mountains.

Situated four hours from Havana, Topes de Collantes is a protected area high in Cuba’s second-highest mountain range. I had heard of Crystal Mountain coffee, which I was told grows next to this idyllic nature reserve and in soil rich in minerals. Eager to learn more, I had a driver take me to the Escambray mountains and the Topes de Collantes nature reserve.

We tried to reach the centre of the area from the west, making a stop at the waterfalls of El Nicho.

Unfortunately, we faced rough roads made even worse by a recent hurricane. A group of farmers warned us that “you won’t make it, fellas” from the back of a Jeep. With a storm heading our way, we chose not to risk it and turned around.

This lack of infrastructure can make transportation and logistics difficult, and not just for curious tourists. In the case of coffee, an inaccessible road can mean a delayed harvest or spoiled beans.

From the moment coffee is picked, it begins to ferment. Bad roads can delay the crop getting to the mill for processing. They can also delay delivery of processed coffee. A long, rough journey increases the risk of exposure to moisture, heat, dirt, and sunlight, all of which can reduce coffee quality.

You may also like Poor Roads: Are They The Biggest Issue Facing Papua New Guinea’s Coffee?

Committed to reach Topes de Collantes, we continued south and then to Trinidad to try a different route. Heading to Escambray from the east is a completely different story, perhaps due to Trinidad’s relative prosperity and importance as a tourist destination. The roads here are much smoother and we could appreciate harvested piles of plantain and sugar cane.

Cassava, avocado, potato, annatto, and citrus are also grown here. As we snaked to higher altitudes, eucalyptus and other perennials grew abundant. These are the trees that provide shade for the coffee plants, allowing them to grow more slowly and develop more complex flavours.

We made it to our destination, but the difficulty getting there was just one of the practical problems facing coffee farmers in Cuba. With the collapse of the Soviet bloc, Cuba lost 80% of its export trade. The resulting poverty had a huge impact, including on agricultural infrastructure.

The harvesting and processing methods in use today are outdated and inefficient. Some smallholders dry coffee cherries on exposed patios and the depulping is performed with wooden mortars. It is a unique and artisan way of doing things that is beautiful to watch, but extremely inconsistent.

This obsolete farming technology leads to low productivity and high post-harvest losses. Cuba imports between 70–80% of its domestic food requirements.

As the Soviet Union provided Cuba with fertiliser and pesticides, its collapse also led to much of Cuban agriculture becoming organic by default.

From talking to local farmers in Topes de Collantes, I learned that land is generally allocated to a farmer by the state. I later found out that the state owns 80% of the land and leases most of that to farmers and cooperatives. The remainder is owned by small-scale farmers.

I was told that crops are sold to the government for an established price, and that this amount is not enough for the farmer to invest in better equipment or education. Since 1994, farmers have been allowed to sell surplus directly to the public.

“We must provide almost our entire production to the government, as Cuban coffee remains a state-owned industry,” says one coffee grower in Topes de Collantes.

I was lucky to share an entire afternoon talking to a local grower over a cup of darkly roasted coffee.

We discussed how the island’s isolation and remote mountainous areas don’t just make the logistics of transporting coffee difficult. It is also hard to maintain contact among producers, cooperatives, and exporters. This lack of information exchange makes the Cuban coffee industry even more arduous.

The Caribbean climate is another factor to consider. Frequent tropical storms, hurricanes, heavy rainfall, drought, and even occasional earthquakes affect the island. In a nation with little money for rehabilitation and damage control, a badly timed storm can have a major impact on food security.

As demonstrated on our failed attempt to reach Escambray from the west, a hurricane can make roads impassable for weeks or longer. Bad weather can also cause a crop to fail or ruin a successful one waiting to be processed.

Cuba’s history proves it has the potential to be a great producing country. Its people’s love of coffee suggests it could also be a healthy consumer market. But the political context and geographical features of this tropical island are hindering the coffee industry’s progress.

Small investments in infrastructure could create huge differences here. Pooled resources, knowledge exchange, and access to a wider market could revitalise the industry.

In the meantime, if you do have the chance to try a Cuban coffee, do so. And think about the almost impossible efforts that brought it from a farm to your cup.

Enjoyed this? Check out Why Some Farmers Struggle to Produce Specialty Coffee

Sebastian is a contributor based in Cuba