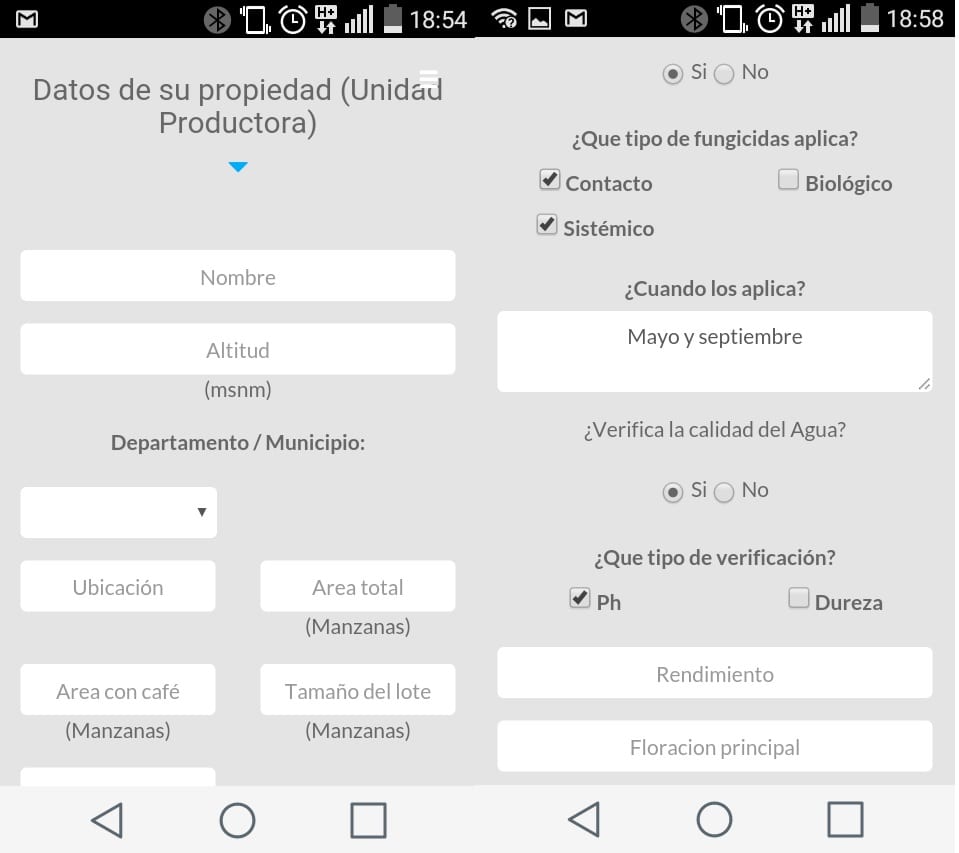 Leaf rust has affected the majority of coffee-producing countries around the world, causing large losses and leaving farmers in, at times, precarious financial situations.

There is no pattern that can indicate, year after year, where or how badly it will hit. And for this reason, producers need an early warning system – a way to know in advance if leaf rust is likely to appear, so that action can be taken against it.

Developing one that will work across an entire country is challenging. But could a mobile phone app be the solution? Sergio Morales is the national coordinator of CEDICAFE, the investigation department of Guatemala’s national coffee association, Anacafé. He agreed to speak to me about how they use apps to support them in limiting the occurrence of coffee leaf rust.

While there are many challenges facing coffee producers, few cause quite as much fear as coffee leaf rust, known as la Roya in Spanish. This disease, caused by the fungus Hemileia vastatrix, caused US $243 million of losses in 2012/3 in Central America alone, according to La Secretaría de Integración Económica Centroamericana (SIECA).

The fungus infects the leaves of coffee trees, leaving yellow-orange spots that look like rust. In turn, this makes it harder for those leaves to photosynthesize. Since this is how plants get energy, both yield and quality decrease until, in the worst of situations, the leaves fall off and the plant dies.

Sergio tells me that it’s easy for coffee leaf rust to spread. Things such as poor coffee tree nutrition, high humidity, temperatures around 22ºC/72ºF, rain, and coffee tree age can help it to thrive. Data, training, and organisation are key for confronting it – something that Anacafé has been working on ever since the pestilence arrived in Guatemala in the ‘80s.

These leaves are infected with coffee leaf rust, as demonstrated by the yellow-orange spots.  Credit: Anacafé/Guatemalan Coffees

In order to fight coffee leaf rust, countries – and producers – need to know how severe it is, how it is going to behave, and where to concentrate their efforts.

And to do this, they need data. CEDICAFE wants to monitor every region of Guatemala so that they have comprehensive, up-to-date information that will allow them to know how prevalent leaf rust (and pests) are. As they notice changes in the disease’s behaviour, they will be able to predict outbreaks.

However, this is no easy matter. As Sergio explains, the organization monitors at least 540 units spread across seven different coffee regions.

“We started our monitoring manually,” Sergio recalls. “Every assistant would go to the production units and would examine a lot to determine how much incidence and exfoliation there was. This would be measured periodically. However, the work was slow and it was difficult to collect a good enough amount of data.”

Fortunately, modern technology has now made data collection much easier.

Producers analyze the degree of leaf rust infection on a tree. Credit: Anacafé

The Coffee Cloud That Protects Against Leaf Rust

Sergio tells me that, in 2015, USAID and a regional climate change program partnered together to create and launch Coffee Cloud: an app that producers can use to record data about leaf rust occurrence on their farm.

The app – which also has a Spanish-language version called Nube de Café – means that technical assistants no longer have to visit every farm just to collect data. Instead, they can educate producers on how to do so and then analyze the data. It’s a more efficient and, therefore, more effective way to get advanced warnings about leaf rust outbreaks.

Available on both Android and iPhone, it doesn’t require an internet connection for data entry and is currently used by 1,800 producers.

How Does It Work?

After creating an account on Coffee Cloud, the producer is allocated to the closest production unit. He or she is then able to receive location-specific data, in addition to logging leaf rust occurrence.

The producer will be asked about their varieties, soil conditions, fertilization methods, and leaf rust control. For the last element, the app asks about products, dosage, and frequency of application.

The app gathers data about the producer’s farm and farm management in order to give recommendations. Credit:  Anacafé

The producer should then choose the Basic diagnosis, which will walk them through recording occurrences and their severity. The app will ask questions about how many trees are infected, how much of the leaf is affected, the progression of the infection, and more.

The Advanced diagnosis is designed to be used by technical assistants, and will provide recommendations based on the local data that has been collected.

Luis Valdes, a coffee producer from the Coban Region of Guatemala, tells me that the app “is an easy way to gather information. It is very simple and saves a lot of time. What is interesting is that, when every coffee grower uses the Anacafé app efficiently, we can get valuable information at the right moment so that we can make more accurate decisions.”

A coffee producer checks leaves for coffee leaf rust and then enters the data in Coffee Cloud. Credit:  Anacafé

In the future, Sergio tells me that they hope Coffee Cloud will become even more accurate. They are currently linking the app to Guatemala’s meteorological stations so that they can predict how changes in the weather might affect leaf rust outbreaks. The app can also measure vulnerability to climate change.

An app won’t eradicate coffee leaf rust. It won’t necessarily be enough to keep it at bay. But the more information that producers have, and the more information that they are able to share, the better prepared they will be. The advance warning that apps like Coffee Cloud provide will enable producers to take preventative action, predict outbreaks, and ultimately protect their crops against the disease.

And that’s good news for everybody in the coffee industry.

Liked this article? Check out How Does Your Coffee Actually Cost to Produce?

Please note: This article has been sponsored by Anacafé.

Understanding land succession in Kenyan coffee production
A Day in the Life of a Colombian Cherry Picker
The Rise and Fall and Potential Rise of Brazilian Specialty Coffee
The Philippine Coffee Board: We Want Producers to Cup Their Coffee