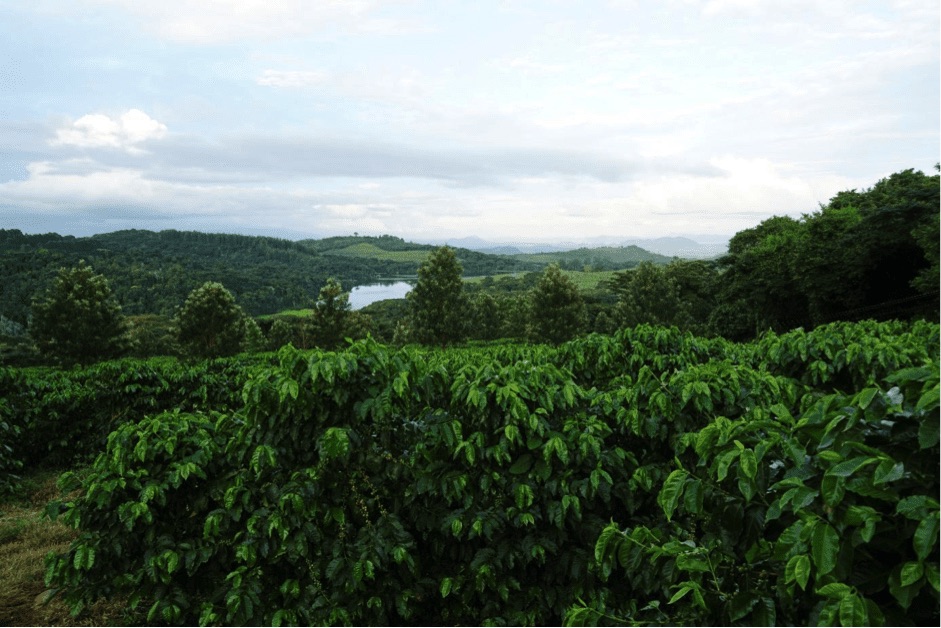 Zimbabwe: this once flourishing country came to a halt 37 years ago. But today, after years of darkness, Zimbabwean coffee farmers are finally starting to see hope.

Growing up on a Zimbabwean coffee farm, my passion for this crop has been life-long. So, months after Robert Mugabe’s last presidential term, I travelled to the coffee belt in the Eastern Highlands.

I wanted to see for myself how farmers felt about the future of coffee in Zimbabwe. And so, I spoke with smallholder producers, NGOs, private sector actors and tourist operators in the coffee industry – and of course, enjoyed a homegrown brew. Here’s what everyone wanted me to know.

Could This Be A New Era For Zimbabwean Coffee?

After decades of struggle, the coffee community is optimistic about the industry’s future.

On November 2017, President Emmerson Mnangagwa welcomed investors in his inaugural address. And since then, there have been signs that economic growth and foreign investment are returning to Zimbabwe.

Zimbabwean coffee farmers had waited almost three decades for this. But, even though there are more investors and signs of economic recovery, the country’s upcoming elections create a feeling of instability.

Increased rainfall has boosted crop production and optimism after the drought of 2015–16. Credit: Nicole Motteux

The Fall of The Zimbabwean Coffee Industry

Zimbabwe once stood out for its prosperity: a tall flame lily (the country’s national flower) growing strong in the field of Africa. In fact, by the 1990s, it had one of the continent’s most developed economies and was known as the ‘agricultural breadbasket’ of Africa.

Coffee was Zimbabwe’s fifth-largest export. Its high quality, strong aromas, and rich chocolaty flavours made it famous in the international coffee scene.

Backed by the Department of Agricultural, Technical and Extension Services (AGRITEX) and research from the Coffee Farmers’ Association, “Zimbabwe became recognised as a world authority on growing consistent quality coffee and improved processing techniques. It was a time of great potential and positivity,” says Johane Jori, Zimbabwe Coffee Mill director.

In 2000, Mugabe’s land reform program forcibly reclaimed more than 6,000 farms owned by 4,500 white Zimbabwean farmers and companies. My father’s farm, Honde Valley, was among them.

These farmers had operated most of the commercial agriculture; they employed (mostly black) labourers who had, in turn, supported 1.6 million family members. And the Zimbabwean coffee industry was destroyed.

A once highly productive coffee farm is now overgrown with eucalypts and maize, which are tended to by families of subsistence farmers unable to find more profitable employment. Credit: Nicole Motteux

The consequences were far-reaching. Between 2000 and 2008, Zimbabwe’s economy nearly halved, with extreme poverty rates soaring up to 72%. The once vibrant agricultural landscape quickly fell into disarray.

Africa’s flame lily had been crushed.

Zimbabwe’s rich, fertile soils and high adult literacy and English rates – the language of international trade – are some of its strengths.

But sadly, its damaged industrial and agricultural base has left farmers with many challenges. These include limited agricultural extension services and unclear land tenure, writes Innocent Kasiyano on the World Bank blog.

Zimbabwe’s 11 million farmers primarily focus on food crops for domestic consumption, along with tobacco. Coffee makes up just 0.086% of the country’s exports.

Agricultural productivity is low; farmers have limited access to markets and are constantly faced with harsh weather conditions. With over 70% of Zimbabweans still dependent on farming, this poses a huge challenge for unemployment, poverty and the struggling economy. Just last year, Zimbabwe was ranked 108 out of 119 on the Global Hunger Index with 63% of the population below the poverty line and 16% in extreme poverty.

Still, as I travelled around Zimbabwe, I heard one constant theme: the hope for change grows stronger every day.

Visiting Zimbabwe: Then and Now

Back in 2014, I visited Zimbabwe for the first time in 14 years. Visiting the coffee farmers filled me with despair, knowing that millions of people were facing drought, uncertainty and food insecurity.

But late last year, after Mugabe’s removal from power, I returned to the Eastern Highlands. I wanted to see our old coffee-farming friends and find out if the new regime marked a new beginning for the industry as well. I was met with optimism. People’s smiles had returned, along with a sense of hope and, perhaps even more powerful, humour.

My first stop was Honde Valley, an isolated valley between Mount Inyangani and the Eastern Highland ranges. This was once prime coffee-producing land and is now home to the majority of Zimbabwe’s smallholder coffee producers.

A snake in the coffee trees on Crake Farm, an increasingly common sight that the farmers believe is due to decreased use of pesticides. Credit: Crake Farm

Before the land reforms, 3,000 smallholder producers in the Honde Valley grew about 700 tonnes of green beans a year, says Johane. Today, less than 300 producers grow around 30 tonnes a year. “Total coffee production for the whole of Zimbabwe in 2016 was only 414 tonnes of green bean,” he adds, sadly.

But times are changing – helped by government initiatives, private buyers, and leaders in the Zimbabwean community.

A Helping Hand For Coffee Farmers

Since 2010, many government programmes and aid agency projects have supported coffee interventions in the Honde Valley.

“Last year, Nespresso bought coffee from us,” he says. “They asked us to grow more. So, I planted 20,000 coffee seedlings. I used my knowledge working with farmers like your [the author’s] father to propagate and grow coffee. I gave these seedlings to small-scale farmers who want to redevelop their coffee fields again to sell to Nespresso.”

Midway Bhunu – a Coffee Program Manager at TechnoServe – explains, “We work across 29 countries to build competitive farms and break the poverty cycle.” He continues, “A key focus is to connect farmers to capital, networks and supply chains through strategic partnerships with coffee industry actors from growers to buyers.”

Farmer-to-farmer support-driven initiatives are vital as well. They are based on a deep understanding of the social, economic, political and environmental context, combined with practical skills to improve practices and incomes.

Take Crake Valley: for over two generations, it has been an excellent example of sustainability. The farm design reduces air temperature, wind, frost, and erosion. It serves as a home for birds, insects, spiders, and other small animals.

They have also been able to optimise agricultural management due to their work with soil and water. And it continues to aid small-scale farmers in the Vumba district as well.

Intercropping coffee with bananas: the banana trees provide shade and useful nutrients for the soil, as well as an additional source of income Credit: Nicole Motteux

The Voices of Zimbabwe’s Farmers

But what does this change look like for Zimbabwe’s small-scale producers?

For the last two years, Zacharia Tangwena has partnered with TechnoServe. This Honde Valley farmer and his ten family members live on a 1.5 ha farm.

In 2017, they produced 1.5 tonnes of coffee cherries, among other crops. “We grow coffee, bananas, vegetables, maize and raise livestock to sell and eat,” Tangwena explains. He showed me how he gradually thins out banana palms between coffee plants as they mature over the first few years.

“The crop residues are fed to the livestock, and their waste fertilises the crops. We can even use it as fuel for cooking.” He explains that this integrated farming approach is critical for a diversified household income and improved food security.

I ask him what he considered to be the cornerstone of his coffee farming. Without hesitation, he replies, “Soil management for plant growth, and soil conservation measures to prevent soil erosion.”

Coffee trees grow alongside other cash and subsistence crops and livestock on the Tangwena farm. Credit: Nicole Motteux

High above the Honde Valley, you’ll find the recipients of the 2017 Honde Valley Small-Scale Coffee Growers’ Award, Samuel and Catherine Nyakuchena. This prestigious award is given to farmers who adopt good agricultural practices.

The Nyakuchena household has already increased production by almost 20%. Inspired by Nespresso’s interest in Honde Valley coffee, Samuel tells me, “We have planted 700 more coffee trees between our maize crop and macadamia trees. We hope coffee will help my children have a brighter future.”

Samuel and Catherine’s son, Tafadzwa Nyakuchena, is one of only ten people in Honde Valley who attend a TechnoServe course. He wants to learn new skills and knowledge to better manage and increase the family’s coffee production.

“Many young people in Zimbabwe live in rural areas,” he said. “There is little hope for work after school. I believe coffee production is a way out of poverty. It brings cash. I must learn to become a good farmer to help my family and other coffee growers here.”

What About Zimbabwe’s Female Coffee Producers?

Midway tells me that TechnoServe is also committed to closing the gender gap by supporting more women in coffee production. “When women are able to participate more fully in the labour market, countries see major macroeconomic gains,” he says.

Ruth Gopo, Secretary of the Honde Valley Cooperative, is a coffee farmer herself. She explains that the 2017 coffee sales to Nespresso resulted in a 36% price jump for AAA/AA grade green beans. These sales incentivised the 280 active farmers in Honde Valley to increase quality and production.

“We’ve already had 220 small-scale local farmers approach the cooperative, interested in planting coffee.” She continues, “To keep Nespresso buying our coffee, we need to improve our quality. We have a chance to make our lives better.”

But, even with an increased demand for green bean, inputs are expensive. “15 bags of fertiliser per hectare costs USD 675 per ha. And then, on top of this, farmers need to control coffee pests and diseases,” she says.

But despite the challenges, coffee can provide a vital source of income. Ruth tells me, “Coffee production has given me financial independence.”

She plans to expand her coffee farm while also holding down a job in Honde Valley’s district town, Hauna. “I am investing in my coffee farm. It gives me a way to look after my family, especially my father who is very old.”

Many farmers hope that coffee farms like this one will provide stability, and be worth investing in. Credit: Nicole Motteux

A Nation Waiting For an Economic Rebound

My visit to Zimbabwe made one thing very clear. Although the coffee industry and producers are hopeful for real change, it’s a long road ahead. Farmers need support to foster economic growth. They need guidance on water management and a clear understanding of land tenure.

Thankfully, there are measures being taken.

Currently, the National Coffee Working Group is conducting a survey for the Zimbabwe Coffee Sector Development Strategy. TechnoServe is also working with the Zimbabwe Ministry of Lands, Agriculture and Rural Resettlement to promote a viable and inclusive coffee industry through private-public sector partnerships.

“After all, the 2018 season is good again, the only issue is the low volumes. But quality-wise, it’s looking good, the country may produce around 450 tonnes,” says Johane.

Zimbabweans hope for certainty and improvement for their families. Credit: Nicole Motteux

What the Zimbabweans I spoke to wanted was simple – to see stable leadership return to Zimbabwe.

In turn, this would bring innovation and investment back to the country, allowing strong agribusiness and rural economies to develop. This would lead to the flourishing of coffee production once again.

After a long and brutal struggle, Zimbabwe’s coffee industry is still standing. The flame lily has the potential to thrive once again, if only it is allowed to do so.

Enjoyed this? Check out: Could Zimbabwean Coffee Once Again Be on Specialty Menus?