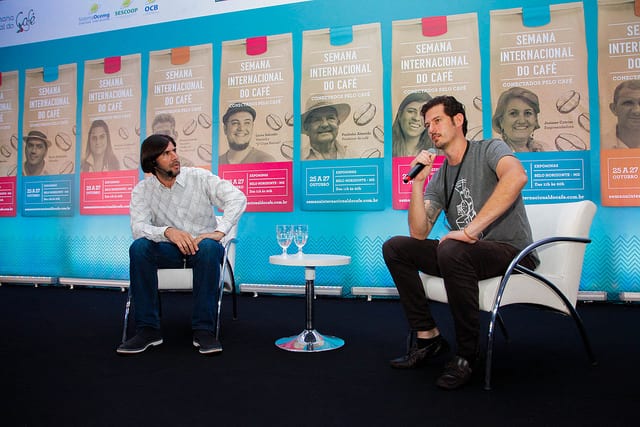 The WBrC and WCTC were originally planned to take place in Dubai, along with the World Roasting Championship. However, all three of them will be moved as the SCA instead launches a new annual trade show: World of Coffee Dubai. An SCA press release states:

“Hosting a World of Coffee show in Dubai, a common gateway to the Middle East and Africa, represents an exciting opportunity to engage a market that ranges from coffee producing countries like Kenya and Yemen, to the many Arab cities where coffee serves as a key social drink, evident in the presence of a dallah coffee brewer on the dirham coin in UAE.”

But what does it actually mean for the coffee industry? And why should we be celebrating Brazil’s selection as host?

Brazil will host the 4 World Championships for the first time

World coffee competitions are an example of the specialty coffee industry at its best. We’re talking skilled baristas and roasters serving exceptional coffee with the latest equipment. What’s more, competitors normally use the competition as a platform on which to share the story behind the coffee: why it tastes so incredible, how it was farmed and processed, and what it means for the communities growing it.

And Brazil, the world’s largest coffee producer by volume, is an ideal space for this discussion. It doesn’t just produce roughly one-third of the world’s coffee (the world’s second-largest producer, Vietnam, produces less coffee than the Brazilian state of Minas Gerais). It also has a thriving specialty café culture, with coffee houses, roasteries, and passionate consumers.

Henry Wilson, CEO of Perfect Daily Grind, says, “It’s exciting to see producing countries take centre stage for world coffee events. These countries have the ability to drive the industry forward, with innovations both in production and consumption. It’s only fitting that our conversations about coffee also take place there.”

Maria Claudia Lucindo Porto, head of International Relations at Minasul Cooperative, adds, “We are extremely happy and proud to have the events take place in Brazil this year. For us, it is a great honor to have coffee professionals from all over the world visit. Knowing that we will have the opportunity to deepen their connections with origin and producers already marks this as a successful event.”

All the events will held during Brazil’s International Coffee Week (ICW), which is the country’s largest coffee expo. This year, it will take place on the 7th–9th of November, 2018. Producers, roasters, buyers, and more will find themselves catered for, with a wide range of lectures, cupping sessions, and green coffee competitions. In 2018, there will be 25 simultaneous events focused on “Market & Consumption”, “Knowledge & Innovation”, and “Business & Entrepreneurship”.

As Director of Café Editora and ICW co-creator, Caio Alonso Fontes points out, “winning the chance to host 4 World Championships is the result of the combination of many features presented by ICW: connection of all links from the coffee supply chain, diversity of international and domestic attendees, maturing of the domestic market, and the unstopped promotion of new businesses in specialty coffee”.

It’s just over six months until the Brazil hosts four of the six world coffee championships, and we’re already counting down the time.

As Danilo Lodi, World Coffee Events representative and certified Judge, tells us, “I’ve dreamt of World Coffee Competitions in Brazil since I started working with coffee. It’s going to be great to receive the community from all over the globe and show them how amazing and diverse Brazilian coffees are – see you all in November!”

Enjoyed this? Check out What’s The Future of Brazilian Coffee? Recapping ICW 2017