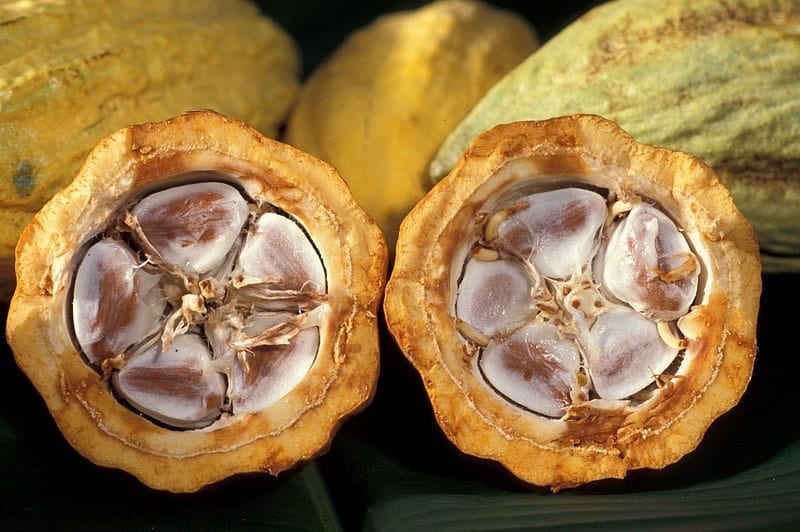 Want to know where your chocolate comes from? You’ll have to travel to hot, humid climates where rain falls frequently and your clothes stick to your back during summer. On small farms, you’ll find trees populated with large, colorful fruit called cacao pods – although it won’t look like anything you’d find in the supermarket.

Inside the pods grow the seeds that we ferment, roast, grind, conch, temper, and mold to make our beloved chocolate bars.

So, let’s take a detailed look at this wonderful fruit and what lies inside it.

Freshly harvested cacao pods; these will soon be cut in half ready to collect the seeds. Credit: Ruta Origen

Cacao pods sprout from “floral pillows” on the branches of the cacao tree (Theobroma cacao, or “food of the gods,” to be precise). Pedro Varas Valdez, a cacao producer from Guayaquil, Ecuador, tells me that the appearance of the pods – which are known as mazorca in Spanish – will vary greatly depending on the variety, genetics, region, and more.

But they all have the same structure when you break them open.

Eduardo Salazar, who produces cacao on Finca Joya Verde in El Salvador, tells me “The cacao pods are composed of the exocarp, mesocarp, endocarp, funicle, seeds and pulp.”

The anatomy of a cacao pod. Credit: United States Department of Agriculture, Public Domain, with labels added by Julio Guevara

The cacao exocarp is the thick shell of the pod. As the external layer, it has a gnarled surface that serves to protect the whole fruit.

Unlike coffee, which is generally green when unripe and red – or occasionally orange, yellow, or pink, depending on the variety – when ripe, cacao exocarp comes in a rainbow of colors. As Alfredo Mena, coffee and cacao producer at Finca Villa España, El Salvador, tells me, “You can find green, red, yellow, purple, pink and all their tones respectively.”

The color of the exocarp will depend on two things: the pod’s natural color and its ripeness level. Pedro tells me that it takes four to five months for the pod to grow and ripen. “The color of it tells us that it’s ready,” he explains. “Here, in Ecuador, the color of the pod also varies with many shades, but there are two basic colors, green and red. The green color (yellow when it’s mature) is specific to the Nacional cacao, while red or purple (orange when mature) colors are present in the Criollo and Trinitario (CCN51).”

Nacional cacao, Criollo, Trinitario CCN51: these all refer to different varieties. And there are many of these.

For example, Eduardo tells me, “The phenotypic characteristics of a Salvadoran Criollo cacao are elongated, pointy, corrugated and with cundeamor [bitter melon] or angoletta [more rounded] forms. It changes from green colors to an intense red when the maturity levels are optimal, with white seeds and white pulp.

“Another example, the Ocumare, is a modern Criollo similar to a ‘Trinitario’ type with an 89% purity. It has an elongated pod similar to the Salvadoran Criollo, with a change of color from mulberry to orange when maturity levels are optimal. However, the cacao beans are purple with a white core… It all depends on the cacao mutation, which depends on the region, climate, soil conditions, etc.”

For this reason, it’s crucial that a producer knows their crop. Without this knowledge, they won’t be able to tell when the pods are ripe – something that is key to the chocolate’s quality.

The endocarp follows the mesocarp and is the final layer of the “shell” surrounding the cacao beans and pulp. As we get further inside the cacao pod, it becomes slightly moister and softer. However, it still adds structure and rigidity to the pod.

Although crucial for the plant’s health, Eduardo tells me that “the layers of the cacao pod (exocarp, mesocarp, and endocarp) do not affect the flavor in any way.”

The eeds are covered in a white, sticky pulp or mucilage that is only removed during fermentation. Just like in coffee, the pulp contains a high number of sugars. Unlike coffee, however, it can also be consumed on its own.

Pedro tells me, “Some people make juice, liquor, beverages, ice cream, and jam [with it]. It has a unique, sour flavor and some people say that it has aphrodisiac properties.”

It’s not just seeds that lie inside the pulp. You’ll also find the funicle intertwined among them. This is a thin, thread-like stalk that attaches the seeds to the placenta. The funicle and placenta, like the pulp, break down during fermentation.

A cacao pod has been split in half during processing, revealing the pulp, beans, and funicle. Credit: Souvenir Coffee

The Seeds of the Cacao Pod

And finally, we reach the most important part – for us! – of a cacao pod: the seeds. These are what finally get turned into our chocolate bars and beverages.

Alfredo explains, “Internally, you find the cacao beans, which are covered in pulp, ordered in rows that go around the placenta or rachis in such a way that it looks like a corn cob.”

Eh Chocolatier states that the seeds are shaped like flat almonds, and you will usually find 30 to 50 of them in a pod.

Can We Use The Whole Cacao Pod?

So, if the cacao seeds are the only part of the fruit that ends up in our chocolate, does that mean the rest goes to waste?

We’ve already mentioned that pulp can be consumed on its own. Additionally, Eduardo tells me, “In Latin American countries, the cacao [by-products] may be used to feed livestock.”

Alfredo adds that “cacao pods uses are varied. In a cacao event in Thailand, they served a dinner with more than 70 different [cacao] servings that varied from soups, rice, meats, desserts, drinks and others.”

And Pedro explains that, even when the by-products aren’t consumed, they can still be reused. “The shell of the pod, once it’s been harvested normally, is left in the plantation because the Forcipomyia fly (principle insect that helps in the pollination of the cocoa flower) will lay its eggs in there. Then [the shell] is reincorporated in the soil once it’s degraded,” he says. “Other farmers make compost with the shells because they are rich in potassium and help to improve organic matter in the soil.”

When we unwrap a bar of fine chocolate to see the cool, dark dessert within, it’s a very different experience to a producer cracking open a cacao pod. Yet it’s clear that this food is marvellous at every stage: from the colorful pods that grow among delicate cacao flowers to the final product that we consume with so much appreciation.

Enjoyed this article? Check out How to Evaluate Cacao & Chocolate!