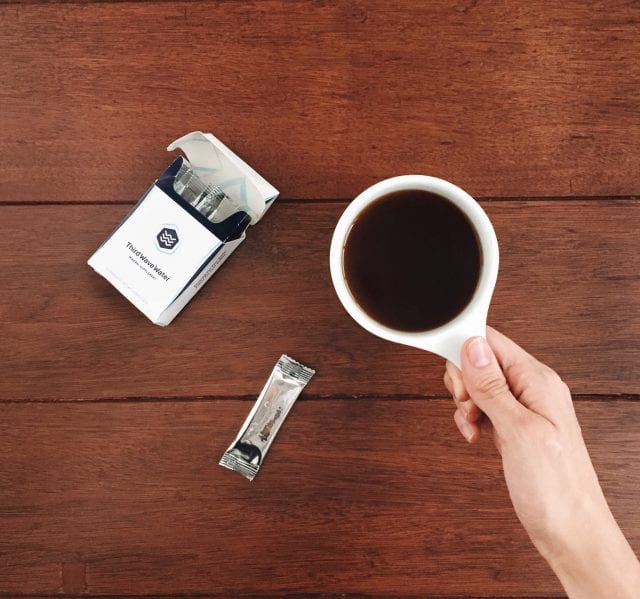 Third Wave Water has already made a splash in the specialty coffee industry, and now it’s set to go mainstream with a US $100,000 investment from Barbara Corcoran of reality TV programme Shark Tank.

Shark Tank, if you’re not from the US, sees entrepreneurs pitching their company to highly successful business owners in the hopes of an investment (much like Dragons’ Den in the UK).

And while Third Wave Water has always been a niche product, the sample coffee (brewed by US Brewers Champion Dylan Siemens of Onyx Coffee Lab) was too sweet a bait for shark Barbara Corcoran to turn down.

SEE ALSO: Where Is The Coffee Industry Going Next? Insights From WOC 2017

Despite the name, this product isn’t actually water: it’s a combination of minerals that, when used as an additive, the company says will produce the best possible water for brewing coffee. (And plenty of devoted customers would testify to this.)

After all, the biggest ingredient in any cup of coffee, even an espresso, is water.

Although some of the sharks expressed concerns about the product’s ease of use, Corcoran declared that the sample brewed with Third Wave Water “tasted twice as good as the other cup.”

“I’m going to know how to market it,” she declared. “We will get tons of repeat orders. I think your marketplace is online.”

What Does This Mean for Specialty?

59% of US coffee drinkers have consumed gourmet coffee in the last day – and while “gourmet” is only loosely defined, Corcoran’s investment in Third Wave Coffee indicates that she sees a loyal following.

What’s more, with the exposure on national television, Third Wave Water have demonstrated the potential of their product to millions of viewers. Even if their pitch hadn’t been successful with the sharks, this was still an opportunity to convert a large number of new customers.

Let’s not forget that, if anything screams specialty coffee, it’s adding minerals to water for the best brew. If a product as niche as this can achieve such success, specialty coffee truly is becoming more mainstream.

It will be interesting to see how Third Wave Water will leverage their investment to attract new customers. But one thing we’re willing to predict is that café owners across the US will find that some of their customers, even the second wave drinkers, are a little more curious about the water in their coffee now. And that’s a great opportunity for introducing even more people to specialty.

Written in collaboration with Tanya Newton.

How to pull a perfect shot of espresso
Which Filter Brew Method Is Best for You?
Swiss Gold (Frieling Coffee for One KF300) - Story & Brewing Guide
Five Practical Ways to Introduce Customers to Specialty Coffee