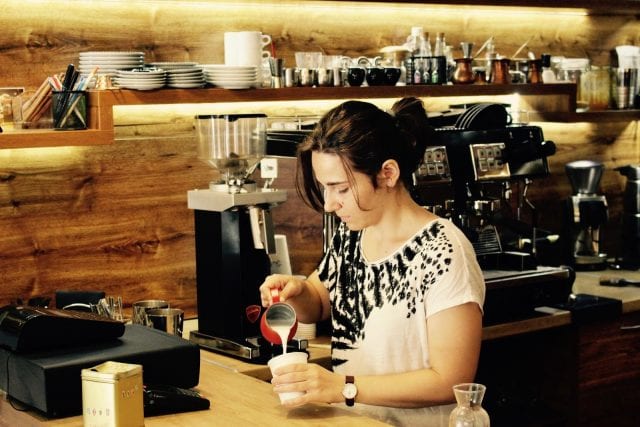 Bulgaria may not have made a name for itself in the specialty coffee industry, but wander around the streets of Sofia and you’ll come across a few third wave gems. Baristas in these coffee shops will serve you single origin brews and excitedly tell you about the coffee’s origin. Other customers, though small in number, will listen attentively.

So why has it taken specialty coffee so long to hit Bulgaria? Who are the big names in the country’s third wave? And what does the future hold for this country’s coffee? I spoke to the local baristas and café owners to find out.

The History of Coffee in Bulgaria

Communism was not known for its creature comforts. Dreaming the day away in a café, enjoying a cup of artisan coffee, wasn’t encouraged by the Bulgarian Communist Party, which held power from 1946 to 1989.

But while life without this little luxury may be unthinkable to many of us, most Bulgarians didn’t know what they were missing: Vesela Vasileva of Dabov Speciality Coffee, Sofia tells me that, even before communism’s rule after World War II, strict regimes actively ruled against social activities.

This country has a long history of warfare, poverty, and totalitarianism. It spent centuries under Ottoman rule, and it was only after the fall of the Ottoman Empire in the mid-nineteenth century that restrictions on socialising and visiting coffee shops were lifted.

But alas, conflict between Bulgaria, Macedonia, Serbia, Greece, and Russia dominated the following century. And then, after the end of World War II, the final Bulgarian Tsar was replaced with communism. It wasn’t until 1990 that free elections were finally held in Bulgaria and peace was in sight.

This isn’t to say that there was no coffee to be had at all prior to the ‘90s. Bulgarians were able to consume a cup of morning magic; it just wasn’t very good. Elena Kapitanova of Chucky’s Coffee House explains that, for the Soviet Empire, quantity, not quality, was the guideline for imports of raw materials.

In more recent years, specialty coffee has increased in popularity in previously communist countries such as Poland, the Czech Republic, and Hungary. Budapest alone has over 23 specialty coffee shops.

Yet Sofia, Bulgaria’s capital, Elena tells me, has just three or four.

As Jordan Dabov of Dabov Speciality Coffee tells me, rich, dark, and bitter espresso reigns supreme. Specialty coffee pioneers are trying, but struggling, to transform the hearts and minds of the Bulgarian coffee drinker – to take them from commodity coffee to specialty.

But while the specialty coffee shops in Sofia are excellent, and the consumers passionate, it’s still very much a niche movement. So why is this? Let’s look to Vietnam to find out.

The coffee preferences of the Bulgarians today have been largely shaped by their previous rulers – rich, dark, bitter coffee brewed with an Ibrik or Moka pot and consumed with heaps of sugar.

SEE ALSO: Brewing Methods Compared: How Should You Make Coffee at Home?

According to Elena, the majority of the Soviet bloc’s coffee was sourced from the low-lying Robusta plantations in Vietnam. This is due to the friendly trade relations between the two communist states.

In a nutshell (or rather a coffee bean), Robusta is cheap. While there is a growing tendency towards fine Robustas, the majority of Robusta is low-quality and produces a bitter-tasting beverage. On the other end of the spectrum are premium and specialty coffee beans which are, most of the time, Arabica. These coffees can be rich, complex, and acidic.

And when it came to coffee, the Soviets and Vietnam stuck together faster than the sugar granules on a wet coffee spoon.

While the Soviets may have looked east for their beans, they turned their gaze westwards for brewing methods. The Moka pot was a heavy favourite, with Vesela telling me it was known as the “Cuban Coffee Maker”, as was traditional Turkish methods.

While these can lead to good coffee, both methods can also tend towards bitterness. And so cheap Vietnamese Robusta blends brewed in a Moka pot led to mouth-puckering “espresso shots”, the kind that most people would only consume with a generous spoonful of sugar.

But that was all during the communist era – what about now? Well, deeply ingrained habits of coffee preparation and consumption following forty-three years of communist rule are hard to change. The lack of privately owned businesses meant that the Bulgarian people were accustomed to consuming what was provided by the state.

It’s understandable that those who grew up drinking a particular type of coffee would be attached to it. But what about the ‘90s babies? Bulgaria’s communist regime ended 27 years ago, yet even those born after that are slow to take to specialty coffee.

There are many reasons why this might be. First of all, specialty coffee is, and always has been, undeniably expensive. A severe lack of jobs and a low average wage doesn’t leave much room in the budget for the black gold. According to the World Bank, Bulgaria has the lowest income per capita in the EU (in fact, many Bulgarians look back on their communist past with nostalgia). In this context, it’s easy to see why some might opt for the 3-in-1 coffee sachet over a single origin filter.

One of my interviewees also hinted that large commercial roasters may be choosing to promote bitter coffee so that they can purchase cheaper beans. This creates an attitude that complex, acidic, third wave coffees are poor quality and to be avoided.

Yet there are some who continue to work towards a Bulgarian specialty scene. Husband-and-wife team Jordan Dabov and Vesela Vasileva established what seems to be Bulgaria’s first third wave café, Dabov Speciality Coffee, in 2008. Jordan tells me that he’s the only qualified SCA barista trainer and Cup of Excellence judge in Bulgaria.

In his wake, other specialty coffee enthusiasts have opened up shop, such as Chucky’s Coffee House and DREKKA – both of which opened in 2014. DREKKA’s Head Barista, Kiriol, is the perfect example of how enthusiasm for specialty coffee can spread. He recalls tasting a chocolaty Ethiopian at Dabov Speciality Coffee that “was like magic to [his] lips”.

DREKKA is the most recent specialty coffee shop to open its doors in Sofia. It imports coffee and tea from a carefully curated list of ten European suppliers, such as The Barn Berlin

Specialty pioneers such as DREKKA and Dabov all share one thing in common. They want to show the Bulgarian consumer that if you have good-quality beans, the recipe for a superb beverage is simple: ground coffee and water.

Kiriol tells me that the main aim is to open the consumer’s mind rather than achieve a large volume of sales. When discussing competition with the commercial roasters, he quips that “they are realists; we are idealists!”

Sacrificing profit margins for consumer satisfaction is an unusual business choice in the EU’s poorest state. Its late arrival to the capitalist system and the struggles it’s faced in adapting means that most Bulgarian entrepreneurs don’t have the privilege of spending their hard-earned profits on customer experience.

Yet there are signs that things are starting to change. The Bulgarian company Balkam Group Ltd., which claims to be southeast Europe’s largest roaster, has recently launched its own range of specialty coffee attached to their Spetema brand name. A marketing powerhouse like this may be the key to unlocking the hearts and minds of the Bulgarian consumer.

Spetema’s Head Barista, Krasen, admits that Bulgarian coffee culture is still behind the rest of Europe. One reason being, he says, is that there is still only a small number of places offering specialty coffee and alternative brewing methods.

But many of my interviewees predict that this will change in five to ten years. They feel that Bulgaria is on the cusp of its third wave coffee culture.

Is Bulgaria the one to look out for then? Should the burgeoning coffee entrepreneurs of the world turn their eyes east, not just to Budapest and Warsaw, but also to Sofia?

Although there is undeniably an uphill struggle ahead, Bulgaria’s specialty pioneers remain upbeat about their country’s coffee culture. It may take be a while before you see an artisan roastery in a small town but, in the main cities of Sofia, Plovdiv, and Varna, the opportunities are plenty.

Ben is a contributor based in the UK.

Everything You Need to Know About Coffee From Sidama, Ethiopia
Coffee in São Paulo, Brazil: 5 Recommended Specialty Shops
How is coffee consumption changing in Nigeria?
A Specialty Coffee Shop Tour of Copán, Honduras