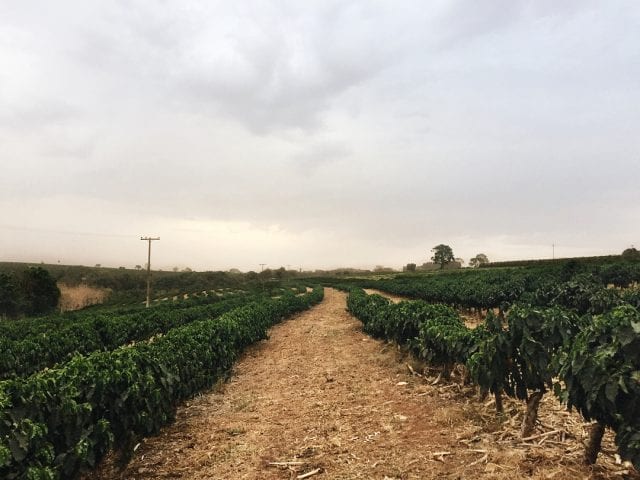 Last year, a peace agreement between the Colombian government and the FARC rebels went into effect, ending over 50 years of warfare but also signalling lost incomes for many rural Colombians.

With news that the armed conflict, which killed a quarter of a million people, is finally over, many producers know they will no longer be able to farm the profitable coca plant used to produce cocaine. And as they look for a replacement, there are questions about whether crops such as coffee can really provide an adequate income.

Brendon Maxwell, Founder of Utopian Coffee, has been working with producers in Cauca on coffee conversion. I reached out to him to learn more about the challenges and opportunities facing these farmers.

Until Colombian president Juan Manuel Santos’ Nobel prize-winning peace agreement, many rural farmers – and the FARC have always been strongest in the rural areas of Colombia – made a living through coca. Now that livelihood is at risk.

The farmers grow the plants and sell the processed leaves, called “coca base” or “pasta base”, to traffickers. Coca is indigenous to the region and has legal uses, but the crop these farmers are selling becomes cocaine.

This isn’t something that’s making the farmers rich, however: they’re just trying to survive.

For years, the FARC guerrillas have acted as middlemen between the farmers and cartels. They have kept the market for coca base stable and farmers relatively protected. For the farmers, it was a reliable source of income and significantly more than they would have earned producing legal crops.

With Colombia hoping to move into a new era of economic and political stability, and the FARC no longer protecting the coca farms, the government will be able to intensify their crackdown on the crop. But this will not be an easy transition. The decades-long legacy of conflict, corruption, and an economy dependent on narco-trafficking cannot be erased overnight.

One program, however, is pulling up the problem from the root – literally.

Pulling Up The Coca

The Colombian government is investing significant financial resources into conversion programs, paying coca farmers to replace their plants. Under the National Program for Replacing Crops for Illicit Use (PNIS), complying farmers sign a contract with the government that entitles them to 36 million Colombian pesos (around US $12,000) spread out over two years.

After receiving their first payment, participants have sixty days to rid their land of all coca bushes. Section 4.1.3.2 of the peace accord firmly states that “Coexistence between being a beneficiary of a substitution program and being linked to economies related to crops used for illicit purposes is not acceptable,” and the government is unwilling to compromise.

According to InSight Crime, the government is concerned that other armed groups may try to move in where the FARC left off. As of such, they have set themselves the ambitious target of clearing 100,000 hectares of coca plantations this year – which requires a voluntary substitution of 350 hectares per day, on top of forced eradication.

If farmers fail to meet their sixty-day deadlines, they forfeit all future payments and development assistance. However, the total removal of all coca plants is no easy task. A single mature bush can take hours to uproot, and as many as 10,000 can grow in the space of one hectare.

What’s more, according to Brendon, farmers are lacking the technical and educational support they need to remove these plants in a sustainable way, let alone find a suitable replacement crop.

It may take a lifetime for Colombia to completely distance itself from the world of cartels and cocaine, but if the country is known for anything else, it is their coffee. With ideal growing conditions and an illustrious global reputation, exchanging coca for coffee seems like an obvious choice.

However, starting a coffee farm from the ground up comes with its own challenges.

A newly planted coffee tree will take at least three years before it produces a cash crop, which is a long time to be left financially vulnerable. Not surprisingly, most coca farmers don’t feel like patience is something they can afford. Some have sought more immediately profitable ventures. such as dairy farming and egg production.

And there are also other issues facing coffee conversion farmers – namely its low market price.

Can Coffee Be More Profitable Than Coca?

Brendon began working with coffee conversion farmers in the Cauca region on the Colombian West coast last year. However, since coca is such a profitable crop, he believes specialty coffee is the only option for these producers.

“The only way to make a good living [from coffee] is to do it in a quality way,” he tells me over the phone.

Brendon knows the story of these conversion farmers is inspiring to people in the United States but tells me that farmers cannot rely on that alone. “People will buy [coffee] for the story once. If the quality and taste isn’t good, they will go back to what they like.”

If farmers invest the time and resources into producing high-quality coffee, in theory, they will be able to maximize their earning potential.  Low-grade coffee prices consistently hover around just US $1.25 a pound on the futures exchange. With specialty-grade coffee, the producer can receive double this or more. While specialty coffee also generally costs more to produce, Brendon sees this as an investment worth making – and so do many of the producers he works with.

“We are really only focused on working on a micro level, helping the farmers with the conversion process from start to finish. It’s a mutually beneficial relationship. The farmers make a good profit and specialty roasters and consumers have a dependable supply of coffee.”

What’s more, some farmers say they feel more comfortable with the transactions. Brendon tells me, “We work with one farmer, Pablo, who says he doesn’t worry as much about the safety of his loved ones now that he grows coffee.”

Pablo has also recently purchased a house in the city, something most people in his rural village aren’t able to afford.

There is still a lot of work to be done, but the farmers in Cauca are optimistic. “The sense of community is incredible,” Brendon says. “Everyone is willing to help each other and share their knowledge and it’s inspiring to be a part of that.”

Farmers selling specialty coffee are not only making a good living but are also able to invest in local infrastructure, creating better, safer, more prosperous communities.

For coca farmers, converting to another crop is full of challenges – yet with support, coffee can provide them with a new livelihood.

Nicoles is a contributor based in the US

Coffee's Role in The Face of Yemen's Humanitarian Crisis
Planning an Origin Trip? 3 Coffee Pros Share 6 Points to Remember
Sustainability in Coffee: What Are The Main Issues?
What are the biggest coffee production challenges facing producers today?