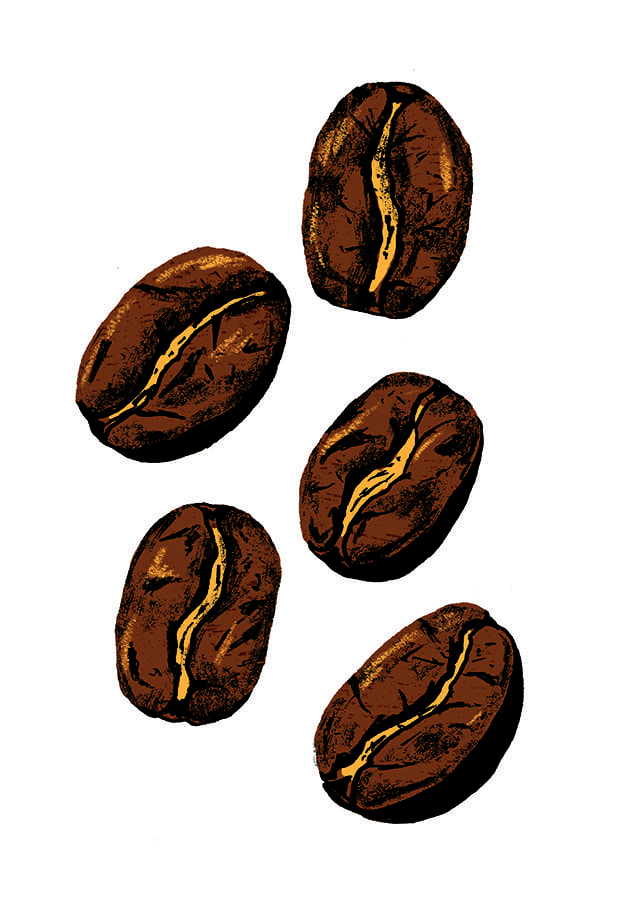 Part of coffee’s beauty lies in its complexity. From the intricacies of coffee processing to the precise parameters of brewing, there are numerous details that can dramatically affect the flavour profile of your coffee – as well as how much the producer is paid. But this can also mean there’s a lot to learn.

Maxwell Colonna-Dashwood, 2015 UK Barista Champion and owner of Colonna Coffee, has decided to tackle this in his upcoming book: The Coffee Dictionary: An A-Z of coffee, from growing & roasting to brewing & tasting. The 256-page hardback is a beautiful work of art, with over 80 illustrations by Tom Jay.

SEE ALSO: What Is Coffee? A Basic Explanation From Seed to Cup

The book will be published on the 7th September, but publisher Mitchell Beazley has sent us the first chapter as a sneak preview. Read it below!

You may have heard acidity being described positively as “brightness” and negatively as “sourness”. This is the thing about acidity: it is integral to a great cup of coffee, but it is also a broad term. There are good and bad acids where taste is concerned, and there are also compounds that from a scientific point of view are acidic, yet we wouldn’t describe them as tasting acidic. Though there are many sources of acidity in coffee, it is only a mildly acidic beverage, with a pH of around 5, as compared to the pH2 of wine. Coffees grown at a higher altitude often showcase more structured, complex, and positive acidity. Coffees without such acidity can be described as tasting flat and uninteresting. Brightness lifts a coffee in your mouth and gives it structure. A lot of perceived sweetness can also be derived from, or elevated by, acidity.

The name AeropressTM is inspired by a high-tech frisbee called the AerobieTM, which was invented by the same man – Alan Adler. The Aerobie has set several world records for the furthest-thrown object; the Aeropress is instead designed to make the perfect brew. Alan is a self-taught inventor from the United States. The Aeropress houses the ground coffee and the water inside a syringe-like brewing chamber. Manual pressure applied by the user forces the brewed coffee through a multi-holed lid that holds a custom-shaped filter paper. (Metal filter discs are also available.) The Aeropress allows you to be very versatile with brewing. You can opt for fine grinds and strong brews, as the pressure generated allows the grounds to be separated from the brew to a degree that a gravity-fed filter method could not manage. You can also brew lighter, more elegant brews. There is even a World Aeropress Championship, which, at the time of writing, attracts contestants from 51 countries.

To agitate is basically to fiddle with the brew in any way that mixes the water and the coffee grounds. By agitating, the brewer can allow the water to more easily access the coffee by mixing things up. This will increase extraction and can be very valuable in any brewing method where the coffee grounds might settle and stop mixing with the water, such as with a French press. Agitation can be achieved in a couple of ways: you can use a stirring stick of some kind or just give the brew a good old shake.

From the Greek for “field law”, agronomy is the science and study of the growing of crops and managing of land. An understanding of agronomy can transform the fortunes of a farm. Certain farms will have a dedicated onsite agronomist; others – with equal success – make periodic use of an independent agronomist to inform their practice. An understanding of agronomy will benefit how a coffee-growing plot is managed and maintained. Many coffee farms are now broken up into many smaller segments that are treated individually. Small changes in sunlight, climate, and soil can have a big impact on how coffee plants behave and on the quality of fruit they produce. Of course, weather and climate are out of a farmer’s control, but adapting to make the most of changes is not – by tweaking irrigation or altering harvesting times to compensate.

You may have heard people discussing the colour of a roast. When discussing colour we are really referring to light and dark, not to a more normal idea of colour – there are no orange or purple roasts! The Agtron scale is a reference point for how dark or light a coffee is. Agtron measuring devices are pricey. In essence, they measure how much light is bounced back off the roasted coffee bean: a darker roast will absorb more light and produce a lower reading, and a lighter roast a higher reading. (It may help to think about how a white T-shirt throws back sunlight, while a black one will absorb it.) There are many terms that have been attributed to the Agtron number such as “light city roast” or “French roast”. The colour, though, is only one measurement of a roast, and a coffee can be roasted in many different ways to achieve the same colour.

The general rule of thumb is the higher the better. But – and it is a big but – this is not a fixed rule. As with everything in coffee, it is a bit more complicated than it seems. The more prized Arabica species is typically grown at altitudes higher than 1,000m (3,300ft) above sea level and can be grown all the way up to 2,500m (8,200ft) plus. The less desirable Robusta crops are grown between sea level and 1,000m (3,300ft). The idea is that at higher altitudes the climate is cooler and the cherry has a longer ripening period, developing a superior flavour. However, the plants do not like it too cold either, which is why coffee is grown in the Tropics. Cup quality is to do with many other aspects of provenance, such as soil, climate, and processing. It is true that no world-beating coffee is grown below 1,000m (3,300ft). It is also true that the world’s most sought-after and prized coffees are not necessarily the very highest grown. Sometimes a cooler micro-climate at lower altitude can mimic a higher altitude and produce similar results.

“100% Arabica” is a common billing adorning coffee packets everywhere, intended as a sign of quality. Coffea arabica is the name of the most widely grown coffee species in the world. (C. robusta is the other widely grown species, though a couple of others, such as C. liberica, show up here and there.) All of the world’s highly graded coffees and essentially those that we would classify as “speciality” are of the Arabica species, or closely related to it. This is why you will see it noted on a packet as a major selling point. However, the species itself does not guarantee quality and there is far more commercial-grade Arabica than there is speciality. As Arabica is a given in the speciality market, you will more likely see the specific variety of Arabica noted on the packaging of speciality coffee companies. Arabica itself can be traced back to the Ethiopian Highlands, where there is still the most genetic diversity of C. arabica varieties (subspecies). The range of flavour within this species is phenomenal as varying varieties combine with other elements of terroir to create distinct and varied flavour profiles. As you will see from the entry about the coffee-related species C. eugenioides, Arabica has its ancestry in Robusta, and crosses between the two species are commonly explored. There are Robusta–Arabica hybrids such as Catimor varieties that can produce high-quality results. The Lempira variety is a Catimor subvariety that is grown extensively in Honduras. I recently bought a Cup of Excellence lot of this variety that was exceptional, with complex acidity and tropical fruit notes.