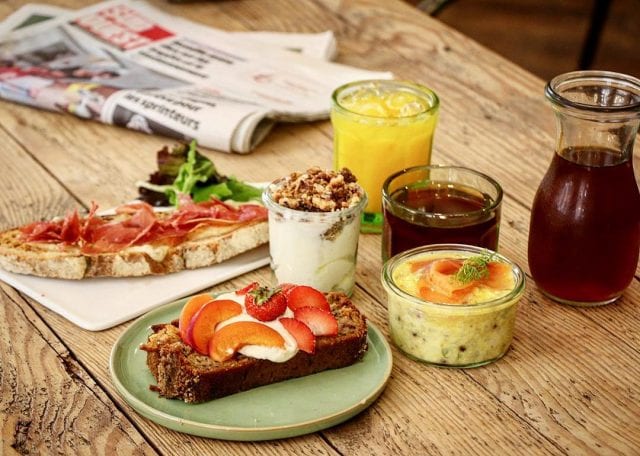 In Bordeaux, a region known for its iconic and complex wines, a new development has been taking root: specialty coffee.

Over the past three years, the city has seen the appearance of several specialty coffee shops and roasters. I spoke to several of these to find out how the locals of Bordeaux are responding to third wave coffee.

The roaster in Café Piha, Bordeaux. Credit: Five of December for Café Piha

The First Growth of Specialty Coffee

However, like all grassroots movements, it only takes one or two daring individuals to take the leap into the unknown.

In 2014, Black List became the first café to offer specialty coffee in Bordeaux. Laurent-Pierre, the founder, tells me that at the beginning it was difficult. Specialty espresso is a bit stronger and more acidic than the French customers were used to, and two euros for an espresso was also something new for the city.

However, thanks to international travelers and some very loyal customers, Black List was able to remain open and offering specialty coffee.

From Wine to Coffee

Laurent-Pierre actually came from a wine background, with 10 years of experience as a wine cellar master. (His next goal is to open a bar where you can buy specialty coffee, great food, craft beer, and biodynamic wine.)

Bordeaux’s wine has been admired worldwide, with prestigious grand crus (vineyards recognising as having excellent terroir) and at least 6,000 chateaus.

And although Laurent-Pierre found that specialty coffee required a change in the way the local community perceive coffee, Arthur Audiburt, founder of L’Alchimiste, feels that its wine background is an advantage.

He explains that Bordeaux is a unique place to start with coffee, because of the deep knowledge its residents have of wine. Many already have a developed palate. With a little work, Arthur believes that the people of Bordeaux will begin to appreciate coffee with the same enthusiasm.

What’s more, he believes the lack of a developed coffee scene can be an advantage. Cafés and roasteries can teach their customers about coffee without having to challenge too many preconceived notions.

My interviewees tell me that, in Bordeaux, they are seeing a general movement toward small, independent business offering quality products.

Florists, patisseries, bookshops… The millennial generation, those people aged roughly 25 to 40 years old, are interested in opening independent shops. They want to respect their coworkers and create their vision. And now there is also a clientele looking for these types of businesses – and which is often intrigued by the complexity and technicality involved in the craft.

Five or so years ago, there were few places for people of this age range to gather and enjoy high-quality products. This is one of the major reasons that the third wave movement has seen such large growth. The cafés offer good coffee, the technical aspect of the craft is admirable, the people are patient, and there is a great ambience.

More and more people in Bordeaux, and in France in general, are aware that something is happening in coffee. And as they become more informed about their beverage, they are beginning to appreciate it better. You’ll even see coffee-lovers touring Bordeaux’s cafés on weekend visits.

What’s more, many Parisians are relocating to Bordeaux. The cost of living, the weather, and the smaller crowds are drawing them to the smaller city. In addition, this month a new high-speed train service from Paris launched, making it even more accessible as a weekend getaway. This is good news for Bordeaux’s third wave coffee shops, since Parisians will look for the same quality coffee available to them at home.

Pascal Gabard of Kuro coffee shop has high hopes for the future of Bordeaux’s coffee. Even if his espressos are “very strong” compared to the local ones, he has found that French people are open to learning more about coffee – it’s just a matter of making that information available.

Keith is a contributor based in Panama

Want to Understand Korea’s Coffee Boom? Look to Latte Art
Beyond Manila: Drinking Specialty Coffee Across The Philippines
Coffee Origins: A Guide to Mexico
Exploring The Chinese Coffee Industry, From Roasters to Consumers