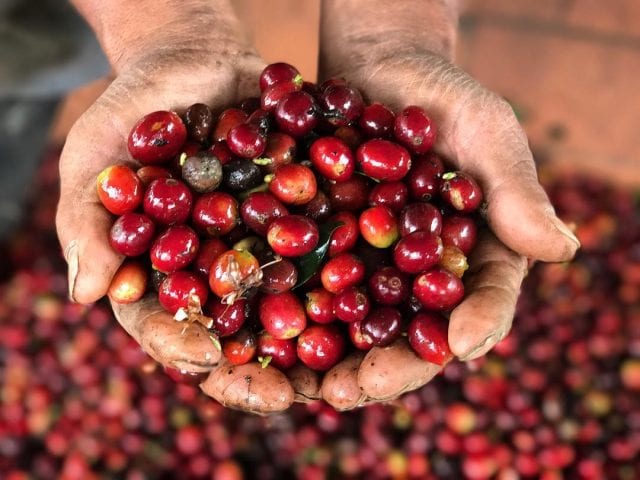 There are around 17.7 million small-scale coffee farmers in the world, the vast majority of them in Asia, Africa, and Latin America. Yet a Fairtrade International and True Price pilot study across Asia and Africa found that only in Indonesia did coffee provide a sustainable income for a family.

They surveyed 465 smallholder farmers in Rwanda, Tanzania, Uganda, Kenya, India, Indonesia, and Vietnam. All of these were Fairtrade farmers, meaning that at least some of their crops were already receiving prices above the international market rate.

A coffee worker on the farm. Credit: Amec Velásquez

How Relevant Are These Results?

Before we look at the results in more detail, it’s worth noting that the study on Fairtrade prices doesn’t include any Latin American countries – even though this is where most of the world’s coffee is produced.

The report states that initially seven Latin American countries – Brazil, Colombia, Costa Rica, Honduras, Peru, Mexico, and Nicaragua – were supposed to have been surveyed. However, the Latin American partner for the study withdrew at a relatively late stage.

This information could have given a more global picture of the coffee trade, and we can only hope that the final study is more representative.

What Do Coffee Farmers Earn?

When selling to specialty coffee buyers, farmers typically receive price premiums based on their coffee’s cup scores. However, many coffee farmers claim that this is still not enough. “The thin months” has become the name for the period of the year when producers do not know if they will have enough money to feed their families.

Do Coffee Farmers Earn Enough to Live On?

The pilot study investigates whether coffee farmers earn a living household income, i.e. enough to support not just them but all members of their household. This is defined as “a basic living basket (food, housing, clothing, health care & transportation) and education, taxes, social security, insurance and pension”.

The report’s Executive Summary tells us that:

It also acknowledges that low profitability is not the only factor involved: “Although Tanzanian farmers also have high coffee profitability, this does not translate into high household incomes due to relatively low production volumes.”

Coffee Farmers Operating at a Loss

In Kenya, the pilot study found coffee farming actually costs more than farmers are paid. And we’re not talking about a small loss: the report found that producers lost a staggering US $8.16 per kilo of dried cherry.

155 Kenyan farms were included in the sample, as well as a focus group discussion, and any anomalies were removed “if considered unrealistic”.

It’s difficult to directly compare this figure to the prices paid, as those are typically per pound of green coffee. However, the report calculated that Kenyan producers would need to profit by US $3.23 per kilo of cherry to achieve a living household income.

What About The Coffee Pickers?

Let’s also not forget that often the most low-paid people in the coffee chain are not the farm owners, but the cherry pickers. The report found that “farmers in India and Indonesia are able to provide their hired workers with a living wage using their coffee income. In Kenya and Vietnam, this is not currently the case.”

What Can Be Done About Low Coffee Prices?

This is only a pilot study, meaning that Fairtrade and True Price’s next step will be a more extensive study. However, it will take a while for the final results to be published. The pilot alone has taken two years of investigation.

In the meantime, coffee buyers and consumers must question their purchasing decisions. Are the farmers being paid a fair price? Are there ways buyers could support farmers in reducing risk or diversifying incomes?

It is unforgivable that professionals in any industry do not earn enough to support their families. As the specialty coffee industry continues to boom, we must look for ways to pass these profits along the entire supply chain.

Stop! Before You Take That Coffee Farm Photo, Read This
Exploring Yield & Profitability For Coffee Farmers
Coffee Producers, Here’s Why You Should Be Using Social Media
Coffee Professionals Discuss: What Is Specialty Coffee?