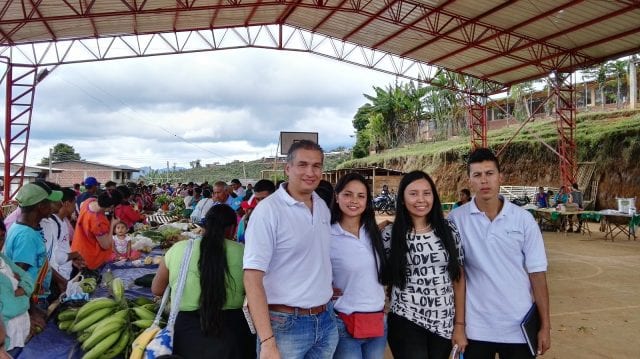 “How can we make the coffee industry more sustainable?” As coffee prices decrease in real terms, and the next generation of coffee producers choose more profitable careers, this question demands an answer.

It dominated discussions at Re;co earlier this month. Yet, if we’re honest, we’ve been trying to answer this question for a long time now. And the problem is that we’re often too focused on coffee.

Yes, we should talk about certifications, cup scores, market demands, and more. We should check the wet mills and the raised beds, and provide premiums for quality coffee. But we should also, as Food 4 Farmers sets out to show, look at whether producers can farm and trade other crops.

Who Are Food 4 Farmers?

Food 4 Farmers is an NGO dedicated to filling the gap between the income needed for coffee farmers to have a good quality of life, and the income provided by farming and selling coffee. Their biggest focus is alleviating hunger and overcoming food insecurity.

The creation of Food 4 Farmers came after an International Center for Tropical Agriculture/Keurig Green Mountain study reported that “even producers who receive fair trade premiums suffer a period of food insecurity ranging from one to seven months of the year – every year”.

Andi Trindle Mersch, member of Food 4 Farmers and Director of Coffee with Philz Coffee in San Francisco, tells me that Food 4 Farmers goes to the communities and see what alternative resources they have that could provide income. They then train leaders to develop business skills, and provide the tools needed to make long-term sustainable changes.

Marcela Pino, Co-Director of Food 4 Farmers, tells me that many coffee producers in Latin America have focused on coffee production. Other crops, which they can farm for their own consumption or for income diversification, have been an afterthought – if thought of at all.

However, this leads to a lack of diversity on their farms, and can have negative consequences for the community’s diet.

Luz Estela Reyes, the Accounting and Finance Coordinator, says that producers in Agua Negra, Cauca were suffering from gastritis and high cholesterol before Food 4 Farmers began work with them six years ago, in cooperation with Nueva Ruralidad. Today, 200 producers from Agua Negra participate in the programme and have a more varied diet.

Another association Food 4 Farmers work with is Nuevo Futuro. Here, 230 coffee producers are led by Luz Eida Chacon. What sets Nuevo Futuro apart, however, is their dedication to including younger people in the project.

Food 4 Farmers has helped Nuevo Futuro to finance a green garden in the community’s school. This will allow the pupils to learn more about agriculture, and develop good habits, from an early age. In addition, Food 4 Farmers provide their usual training and workshops on organic food production to members of Nuevo Futuro.

Food 4 Farmers want to address the root causes of this issue – and, what’s more, they want to do so without causing dependency. For that reason, they focus on providing educational information and the creation of food security strategies.

What’s more, they encourage producers to implement and manage projects, trusting that through improved leadership and organisational skills they will be more unified as a community.

Let’s look at how Food 4 Farmers do this in more detail.

It is the community’s responsibility to democratically elect “promoters”, or local leaders. Each promoter will trained by Food 4 Farmers and Nueva Ruralidad (or whichever local partner Food 4 Farmers is working with). They will then be in charge of up to 12 people, and in turn teach them the skills they’ve learned.

Celina is responsible for 8 people. She passes on the training she’s received from Food 4 Farmers, encourages people to build their green gardens, and verifies that they are applying their new skills and changing their eating habits. She also confirms that they are feeling positive about the initiative and seeing a change.

She tells me that working for her community has brought everyone together. She loves having these responsibilities, because she knows she is making a difference.

German Riveros, the Program Officer of Nueva Ruralidad, tells me that promoters like Celina are what makes the programme so successful. Having a community leader builds trust and encourages change.

SEE ALSO: 3 Challenges to Economic Diversification – And Their Solutions

A Produce Exchange Empowers The Community

Food 4 Farmers invited me to one event in Cauca, Colombia, where I met Marcela Pino, along with Eve Dolkart, Program Officer. Marcela and Eve are in charge of implementing food security programmes in coffee-producing countries.

I had expected to see, like with most events in the coffee industry, coffee trees and wet mills. I had expected to taste coffee and discuss how much consumers will pay for it. But coffee was not the main character in this event: it was the producer.

The event was a trueque, or an exchange. Attendees exchanged or bartered for seeds and produce that they had grown themselves, following Food 4 Farmers’ teachings. There was also a Maize Festival, in which people shared their recipes and prepared dishes for people.

As well as developing their negotiation skills, people discovered the different crops that they can grow. It brought the community together. And, most importantly, it showed how they can create more varied diets and new sources of income – both individually, on their farms, and together, through exchanges.

Hember, a promoter, tells me that these activities are important so that communities can realise what future they want for themselves. He believes they need to build on the exchange to create their own market.

And what’s more, this will only be sustainable when producing communities can take charge of these initiatives – from teaching children and other farmers to organising their own events.

How Coffee Can Help Ecuador Rebuild After the 2016 Earthquake
Can Fine Robusta Be Considered Quality Coffee?
Coffee Farming: Will Shade Trees Reduce The Effects of Climate Change?
Coffee Tourism: Should You Visit a Farm Hotel?