At one point in time, Yemen was known for its historic cities, beautiful landscapes, and good coffee. Now, however, the Yemeni Civil War has been stretching on for two years. Farming coffee in a war-gripped country is hard. Exporting it is nearly impossible.

I spoke to Dylan Terry and Natasha Froshina of French NGO ACTED, which has been working in Yemen since 2013 to find out more about the impact of the war on coffee production. Their aim is to reduce poverty and food insecurity through coffee. And now, more than ever, there is a demand for their work.

SEE ALSO: How Myanmar’s Coffee Trade Is Dictated by Infrastructure 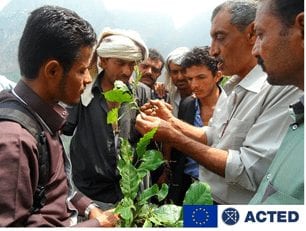 Yemen has a long history of coffee production. While Ethiopia may be the birthplace of coffee, others claim that Yemen is where it was first drunk. And even today, Yemeni coffees can be remarkable, with a typically acidic, fruity, and complex profile.

Yet these complexities extend far beyond the palate. Production here is challenged at each stage of the supply chain, from the ecology of where coffee is produced (consistent water shortages have led to soil erosion) to the lack of a functioning central government (there’s no administrative agency to fill out the phytosanitary reports needed for customs import control). And that’s not to mention the – extremely dangerous – logistical challenges in transporting the coffee.

This isn’t to say that exporting coffee from Yemen used to be easy: most coffee traders attest that it has always been a challenge. However, the difficulties have been elevated to a whole new level. According to Natasha, the blockade imposed on Yemen has made it almost impossible to export coffee. Traders’ only option is to make the dangerous voyage through Northern Yemen into Saudi Arabia.

But war doesn’t always stop trade, so why is this? Military checkpoints, damaged port infrastructure… Natasha tells me that there are numerous logistical challenges to exporting coffee right now. However, the primary obstacle is the limited functionality of certain ministries – such as the Ministry of Agriculture or Ministry of Trade. These are the ones responsible for certifying that the contents being loaded into a container are in fact coffee. Without this certification, getting an importing country to accept the cargo is impossible.

The ACTED team also tell me that they are also concerned about the absence of a Yemen Coffee Origin Certification scheme. Exporters blending other natural processed coffees (such as Ethiopian coffee), and labelling it as Yemeni, has become a great concern for traders.

This situation hurts producers. They aren’t able to benefit from international prices, which historically have favored Yemenis coffee with price premiums. Instead, they can only access the low-paying domestic market. It also makes it difficult to import basic products, such as fertilizer, seeds, de-hullers, and even scissors for pruning the trees.

What’s more, difficulties accessing credit has been exacerbated by the the central bank’s move from Sana’a (Houthi-controlled capital) to Aden (Hadi-controlled capital). According to Dylan, the only alternatives to this bank are a limited number of private organizations.

Technical training is provided to producers in Yemen. Credit: ACTED

How Can Support Be Provided for Yemeni Producers?

ACTED has been working in cooperation with EuropeAid to support over 1,600 coffee producers across the Raymah Governorate. They are providing technical training, investments in mills, support in forming cooperatives and establishing irrigation, and workshops on business planning and marketing.

They take positive steps forwards, only to face new difficulties. In October 2016, they organized a cupping in Amman, Jordan to showcase the quality of Yemeni coffees. However, the only viable way to transport the coffee out of the country was in a UN Cargo plane.

ACTED will continue to organize events and provide this support. In the meantime, we hope for peace in Yemen and prosperity for its coffee producers.

With special thanks to Natasha Froshina and Dylan Terry of ACTED.

Kyle is a contributor based in Canada.

A Producer’s Guide to Pruning & Stumping Coffee Trees
Direct Trade and the Ethiopian Commodities Exchange: What’s the Problem?
What is potato taste defect & how can coffee producers stop it?
Producer Opinion: Why I Always Want to Learn More About Coffee