Perfect Daily Grind > Sustainability > What Was Discussed at The World Coffee Leaders Forum 2016? 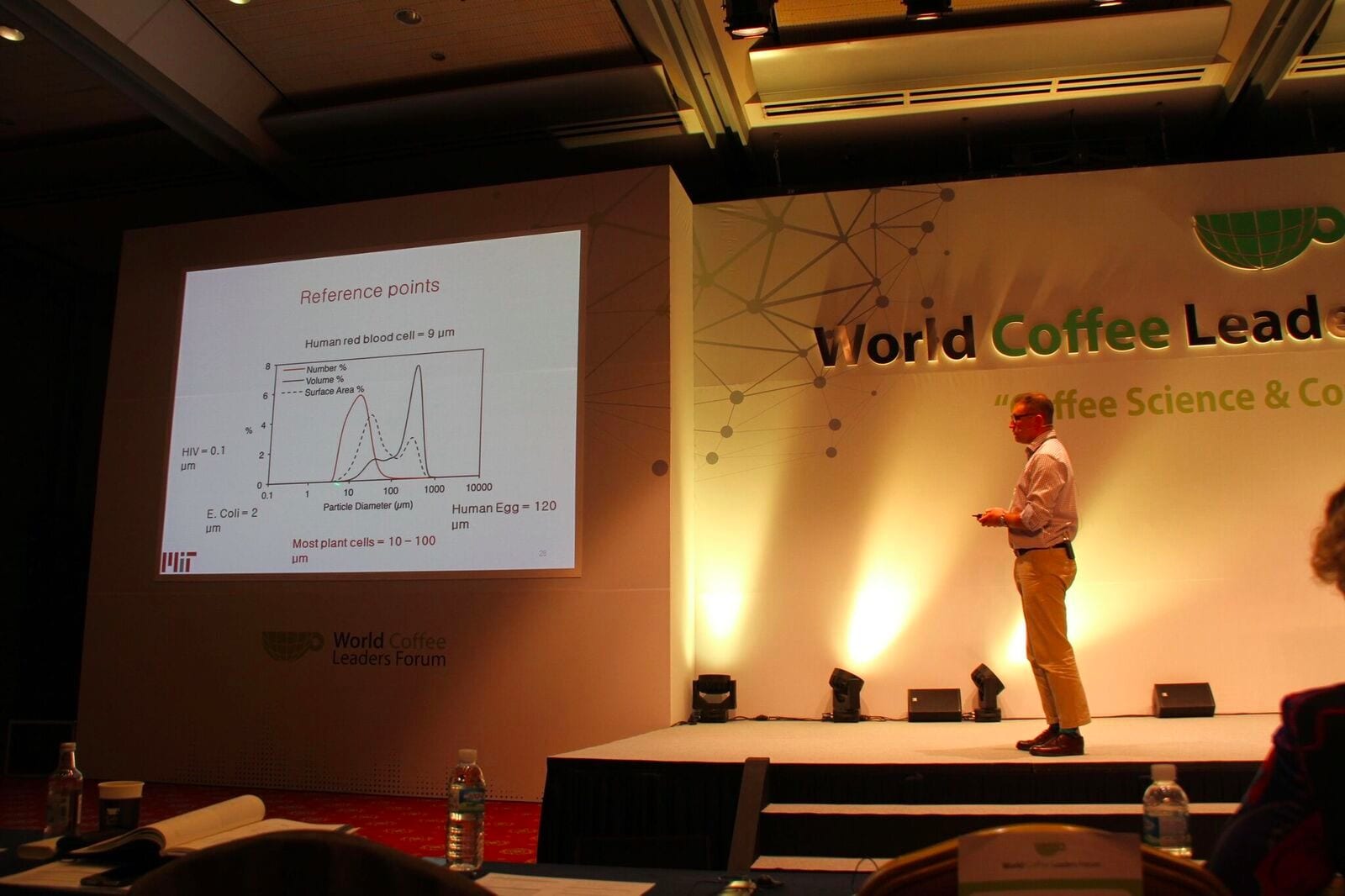 This year, at the Plenary Session of World Coffee Leaders Forum in Korea, six of the biggest names in the industry were invited to talk about one enveloping theme: science and communication.

These two themes are paramount to the advancement of the industry. In just a few decades, third wave coffee has risen hard and fast – and research and innovation have led the charge.

Held in Seoul, Korea, opening speaker Nicholas Cho expressed the need to use Asia as a platform to build strong international networks, primarily through the use of technology, and by creating more start-up opportunities for younger generations of coffee professionals.

Here’s what else was discussed. 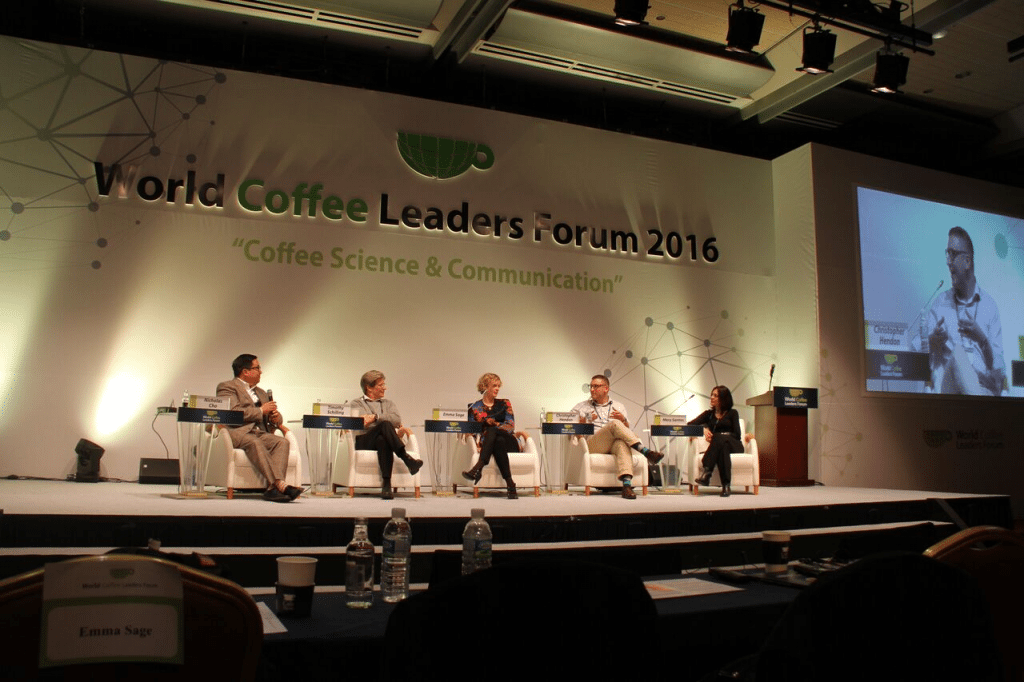 Impressing upon the very real threat of climate change, Dr. Timothy Schilling started his talk with a hard-hitting headline: “Will there be any coffee left in 100 years?”

Predicting the demand for coffee to double by 2050, and for agriculturally viable land to virtually disappear around the same time, Dr. Schilling presented the case for a severe shortage of coffee in the near future. (Remember, 2050 is only thirty four years in the future.) Fortunately, he also explained several ways in which World Coffee Research are working to prevent a crisis.

One of the biggest questions seemed to be land efficiency. Put simply: “How can we grow more coffee on the same land?”

Dr Schilling’s answer was “Arabusta”. These are F1 hybrid varieties of Arabica and Robusta. The aim is to combine the flavour profiles of Arabica with the hardiness and high yield Robusta. 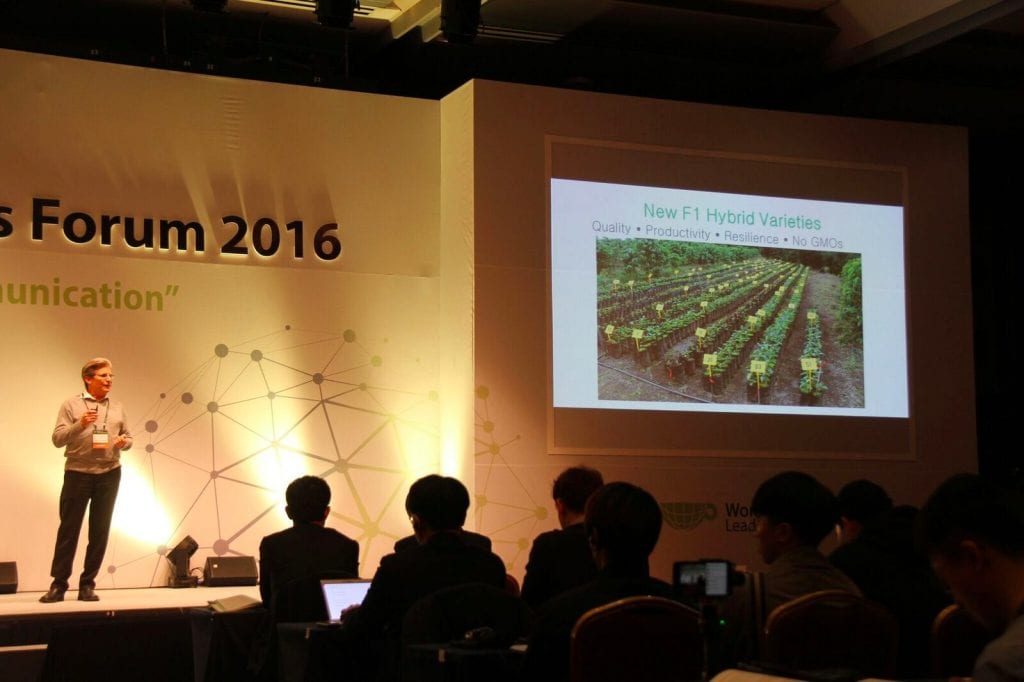 Is Arabusta the future of coffee? Credit: Christine Seah

Gender equality and economic growth: these are where Mery Santos strives to make a difference in the world of coffee. Both poverty and prejudice are barriers in this.

The IWCA’s mission is “to empower women in the international coffee community to achieve meaningful and sustainable lives, and to encourage and recognize the participation of women in all aspects of the coffee industry”.

Their four programmes (referred to by the IWCA as the four pillars of success) are: developing organisations, improving communities, educating through coffee, and building and constructing mechanised technology for coffee farmers.

Through technology comes financial empowerment, which goes hand-in-hand with progress in the route to gender equality. 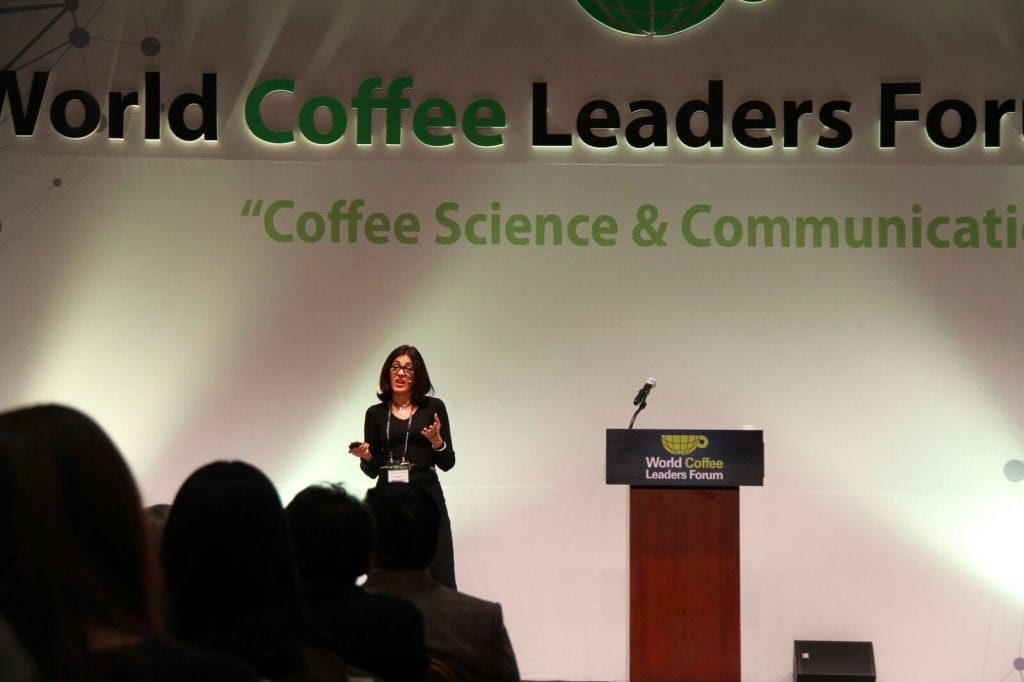 Emma Sage of the Speciality Coffee Association of America (SCAA)

The new SCAA flavour wheel was the talk of the town when it first came out. It’s scientific approach to sensory descriptions represented a new age for the speciality coffee industry.

Why was this scientific approach necessary?

By adopting the WCR’s sensory lexicon, the SCAA was able to create a more detailed, more intuitive, and more comprehensive “non-judgmental” wheel that was founded solidly in science. 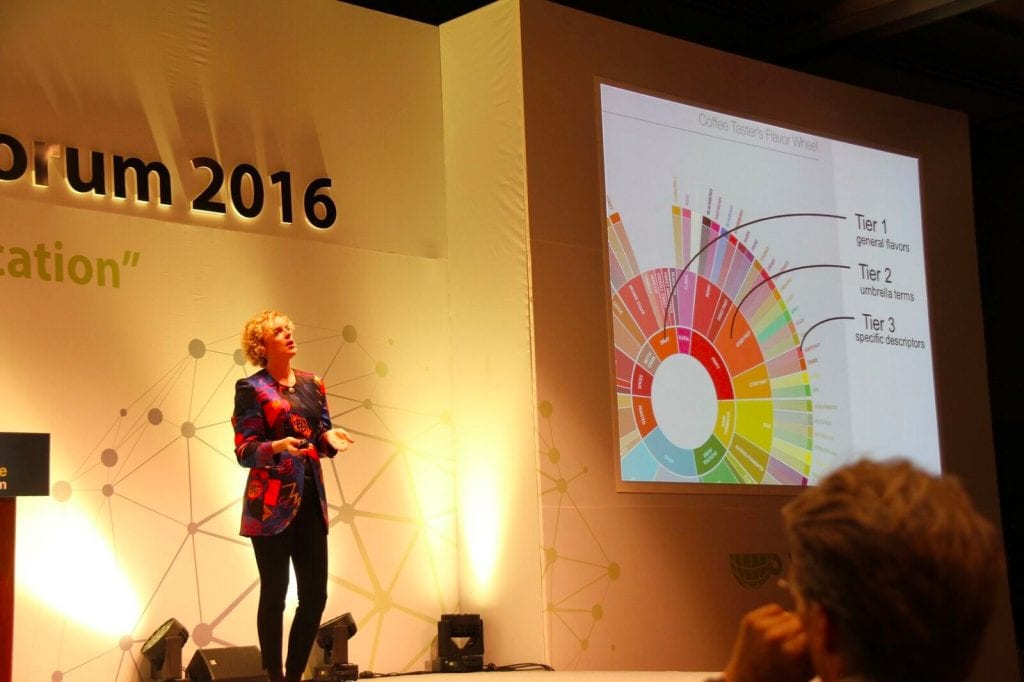 Emma Sage of the SCAA on why taste is a science. Credit: Christine Seah

Dr. Hendon, aka “the water guy”, co-wrote Water for Coffee with superstar barista Maxwell Colonna-Dashwood. And it created more than just a splash in the coffee industry. Hundreds and thousands of baristas around the world now brew more thoughtfully, with greater respect for an otherwise neglected ingredient.

Promising “the coolest chemistry lecture ever”, Dr. Hendon started off with the subject he is best known for: the principles of cations (positively charged ions) and anions (negatively charged ions). The chemical science of how certain elements react with volatile compounds present in coffee helped shed light on “how to simply brew better”.

In addition to water, grind physics were also discussed. Dr. Hendon explained that using laser diffraction, coupled with studies of shatter transition and particle size distribution, it was also discovered that freezing coffee could lead to a more even grind size.

There were also hints dropped that he might be starting up an independent company that creates water specifically for coffee – exciting times ahead.

SEE ALSO: To Freeze or Not to Freeze, That Is the Coffee Question 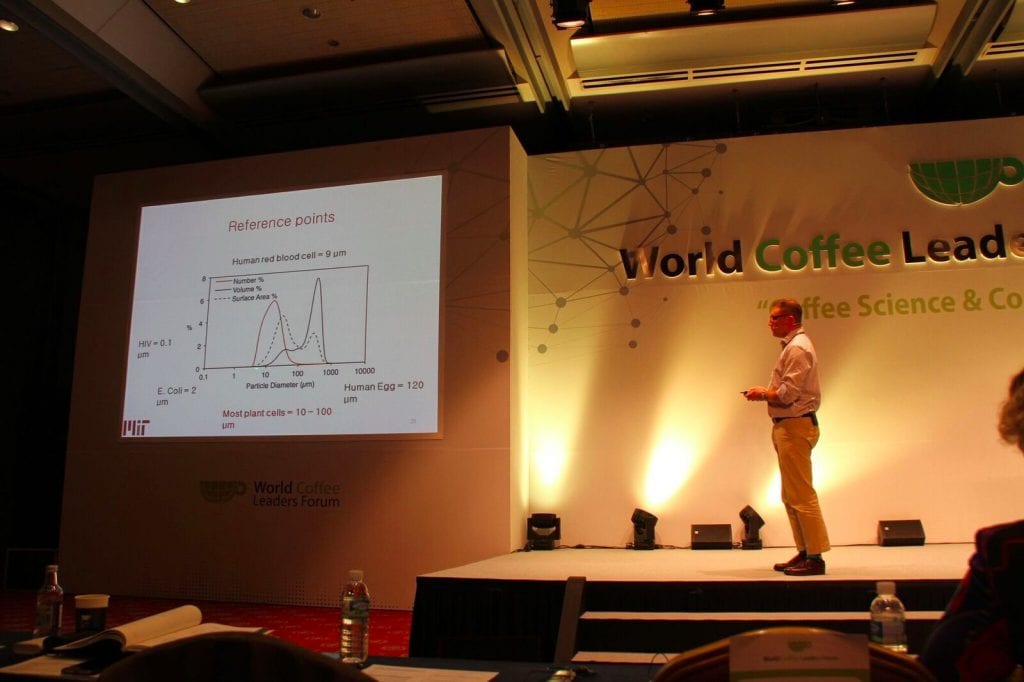 Speaking briefly about the differences between “Good coffee and delicious coffee”, Jung Hyunyong used his extensive knowledge of statistical analysis to attempt to pinpoint what exactly consumers want out of their coffee.

He challenged the industry to strike a balance between “coffee that baristas like” and “coffee that consumers want” – and encouraged baristas and retailers to communicate to customers without pretension or judgement. His emphasis was on using the universal language of flavour as a guide instead.

If Emma Sage needed any more endorsement of her speech on the use of the WCR sensory lexicon, that’s it.

Yannis Apostolopoulos of the Speciality Coffee Association of Europe (SCAE)

“Unification” has been on the tip of everyone’s tongues since the announcement of the merger between the SCAA and SCAE. Yannis Apostolopoulos advocated the need for unification to strengthen the industry as a whole, citing combined financial resources, a more standardised regulation system and sustainability as the primary basis for the merger.

Ending the event on a high, Yannis Apostolopoulos said, “ together we will be an effective, dynamic and authentic organisation, that will give voice and substance to speciality coffee worldwide.”