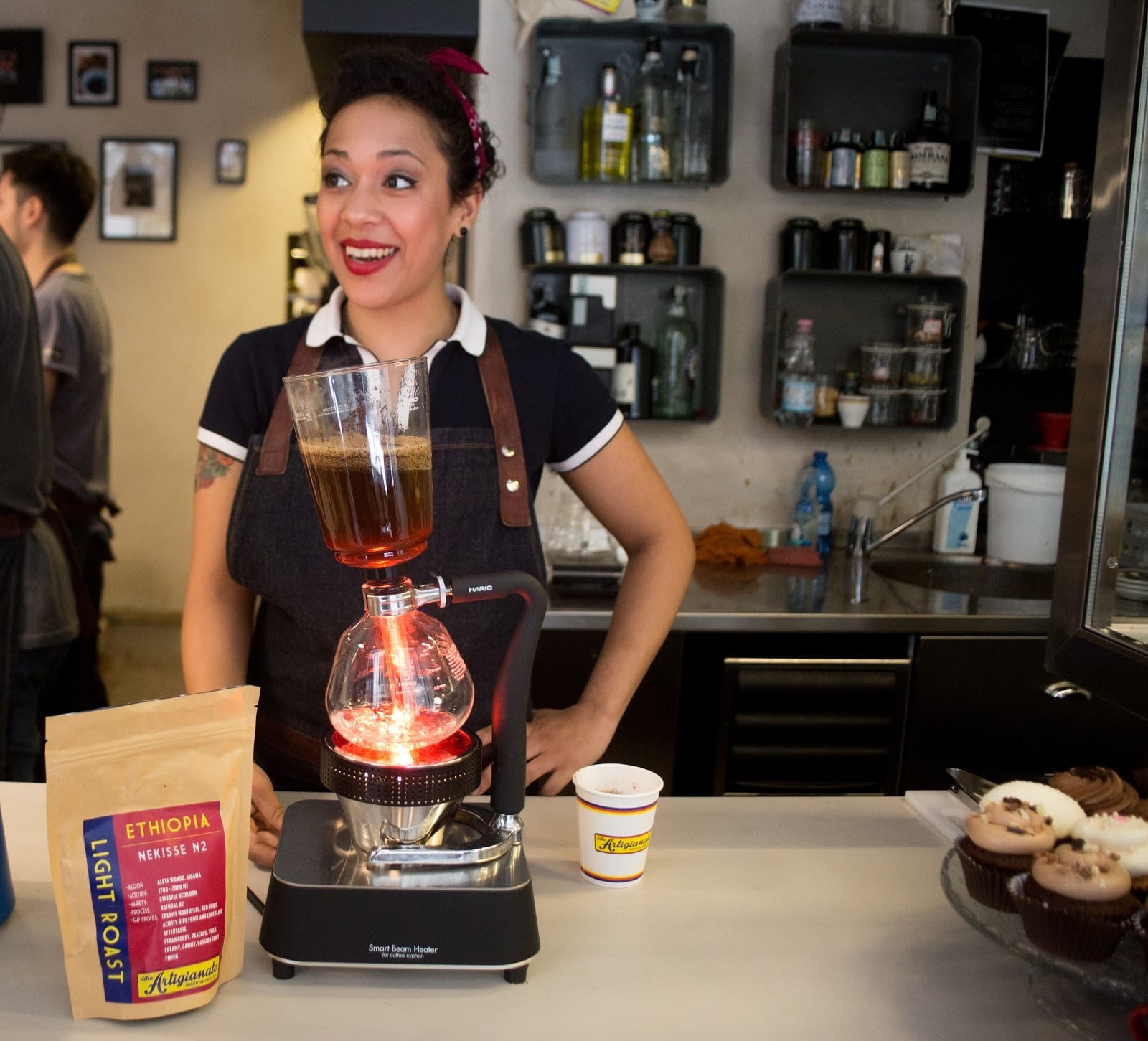 How do you stand out in the capital of espressos? By offering specialty-grade ones. Because in a place where a quick espresso is a way of life, it also becomes everyday. Basic. Mundane.

Ditta Artigianale have taken on the challenge, however, of making the everyday special agan. And their attempts to alter attitudes to coffee are succeeding. Slowly but surely, the people of Italy are choosing to spend a little extra for specialty-grade espressos.

So what made this café successful in an area where tradition mandates way of life? We spoke to Francesco Sanapo to find out.

Today he studies communication and personalities – both of his customers and employees. Because if he is going to change attitudes towards coffee, he has to understand what Italian customers want and communicate why specialty can be exactly that.

He’s recruited a loyal team to do the same, and together they’re opening new doors of expectations. Ditta Artigianale launched in Florence over two years ago. They then opened their second café in March of this year, and their third Florence location on 28th October. And next? Milan and Rome are on the horizon.

Converting Customers to Specialty in 30 Seconds

When you place your order at his counter, Francesco and his baristas will ask you a few simple requests. If it’s your first time at Ditta Artigianale, they ask if you could try the espresso without sugar. To highlight the taste profile, they ask that you first swirl the drink like wine and smell the aroma.

Then as you take the first sip, they gently request that you put the cup down and wait for the explosion of taste in your mouth. It will be fruity and citrusy. Then another swirl and another sip. They ask if you notice the acidity has gone down, the sweetness up, and that there may be a hint of chocolate and almond.

Then one final swirl and sip with a long finish. One where your mouth is not dry, but is salivating, as you relish all the nuances of your specialty espresso.

Francesco’s baristas tell me that the 30-second spiel does not get old, since the reactions of their customers are incredibly gratifying. Francesco also explains that he can share this process with several people at a time, if they are all waiting in line. He even used this technique at the 2013 World Barista Championship, instructing the judges on when to sip their coffees (see the video at the bottom of the article).

He reveals that he has noticed a natural progression: the people drinking espresso in his café will get lost in conversation, or distracted by the paper. They take longer to enjoy their coffee and so the coffee changed. But he realized this is an opportunity to highlight that change – not to bemoan it.

Of course, you can only convert a consumer if they are willing to try the coffee. And some are more reluctant than others.

A favorite story of Francesco’s is of a gentleman who entered the café during its first week, but scoffed at the price hike. It would cost him €1.50 at Ditta Artigianale, versus only €1 at a regular café in Florence. In fact, he predicted Ditta Artigianale would go under.

But six months later, Francesco spotted the same man outside his now-bustling café. Francesco invited him in and offered him an espresso on the house. He took the time to walk him through the taste profile of the single origin specialty espresso, and something changed in the man. Soon, he was making more frequent appearances. Today, he is an enthusiastic regular who will ask what’s in the hopper, and what the origin of his drink is.

A full house at Ditta Artigianale.

SEE ALSO: The History of Italian Espresso: How Well Do You Know your Coffee History?

Turning a Coffee Shop Into a Business

Many blog posts and articles have been written about Ditta Artigianale. Competition fame, interviews, and TripAdvisor reviews bring in some crowds. But as many people in the specialty coffee industry know, it takes more than passion to run a successful business. In fact, it often takes more than coffee.

In Italy, it is unthinkable for a café to only serve coffee. The needs of the customer change throughout the day and in order to stay competitive (relevant, even), the café evolves with them.

Ditta Artigianale serves light bites and cocktails, and earlier this year it brought on mastermind restaurateur Daniele Palladini to open their second location, which has a full-fledged restaurant and gin bar. Palladini is a businessman first and so, in the first two months as partner, he pulled Ditta Artigianale out of the red, making it a profitable enterprise.

As happens to most of us who work with coffee, Daniele is becoming enamored by it. He loves learning more. So much so, in fact, that he has reevaluated some of his other business to commit more of his time and energy to Ditta Artigianale.

From The Coffee Shop to The Farm

But Francesco Sanapo does not just focus on the coffee shop and restaurant business. He also looks to the farm. In addition to being a three-time Italian Barista Champion and 2013 World Barista Championship finalist, he is also the Art Director of Barista & Farmer, a reality series that follows baristas who spend ten days on a coffee farm. Francesco knows a lot about these farms, spending much of his time traveling the globe in pursuit of coffee.

One year, he returned to a favorite Honduran coffee farmer of his, only to be shocked by what he saw: a previously lush farm now bare and downcast. It had battled bad weather the prior season. Francesco had committed to buying three bags and gave them the money for it anyway, even though he returned home empty-handed.

He said that sometimes coffee farmers are blessed by Mother Nature to grow beautiful coffee, but then they need knowledge and education to advance that growth. Without continued funding, they would be unable to train and gain expertise.

Francesco during an origin visit.

Success Depends on a Team

Francesco builds relationships. He has an “international view, and an Italian soul.” While his business partner Daniele works the financial aspect of their company, Francesco develops its concept.

And although he has a great zeal for travel and origin visits, baristas are the future of Ditta Artigianale, he says. Training is one thing, but personalities make all the difference.

Jessica Sartiani used to work in a small roaster, but she was continually let down by what she saw – people were uninterested in the coffee. No one cared about crafting blends, and the maintenance on the equipment was appalling.

As a barista, she is able to make people care about the coffee at Ditta Artigianale. The V60 is her preferred brew method, but she believes that latte art is the start of a conversation: it allows her to talk about the milk, and open the door to discussing specialty. She makes sure it’s just a conversation – not a lecture.

Francesco Masciullo worked in London, but moved back to Italy for Ditta Artigianale. The energy excited him, he says. He wouldn’t have done it for any other reason, because he believes that many Italians see coffee as just another beverage.

But now, he has the opportunity to change that. With Ditta Artigianale, he feels he can make an impact and bring the experiences he learned from working in specialty coffee overseas back to Italy.

Jessica and Francesco are just two of the team members Francesco relies on to bring specialty coffee to the Italian masses. They each have their own stories, their own paths, and their own attachment to specialty coffee. Yet they collectively seduce their clientele with freshly roasted single origin pour overs, and allow them to linger to savor it. Just as the profile of espresso changes with the temperature of the brew, so are Italian attitudes changing toward specialty coffee.

Intensely desirous of sharing coffee origin stories with others. Known to make extreme detours for the perfect cup of coffee.

How Cafés Can Blend Quality, Efficiency, & Customer Service
Barista Basics: How to Make an Espresso in 14 Steps
A short history of the Italian espresso
The Barista Solution to Dosing & Wastage Issues