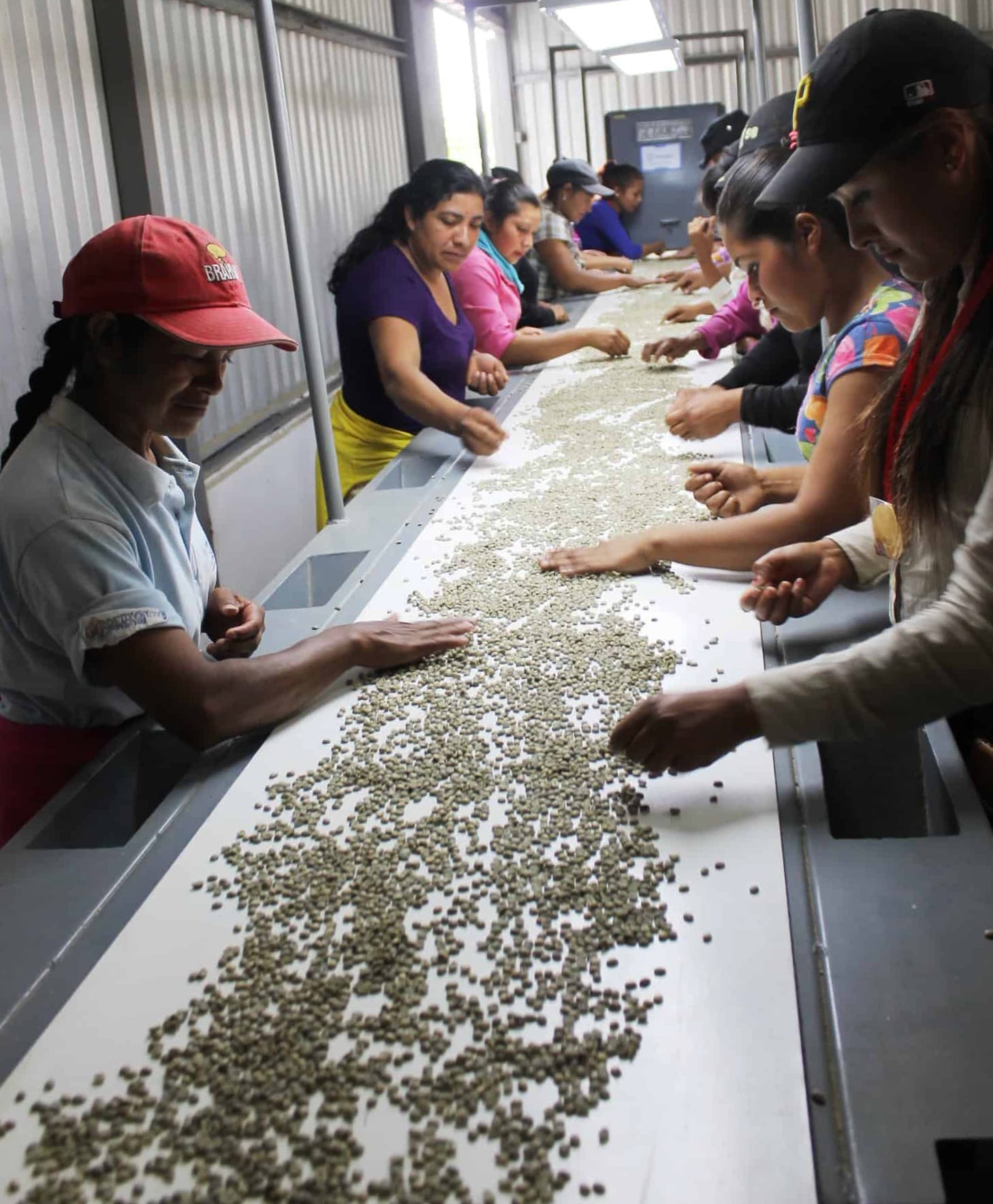 Finca Los Pirineos has produced Cup of Excellence coffees a staggering eight times – four of which they were ranked in the Top Ten. The producer, Gilberto Baraona, is on the board of Project Origin Best of El Salvador Auctions. And the farm uses eight different processing methods on over 90 coffee varieties.

Located on the Tecapa Volcano in Usulutan, 1,550 m.a.s.l., Finca Los Pirineos is a model coffee farm/mill. This is how it processes and mills its coffees. 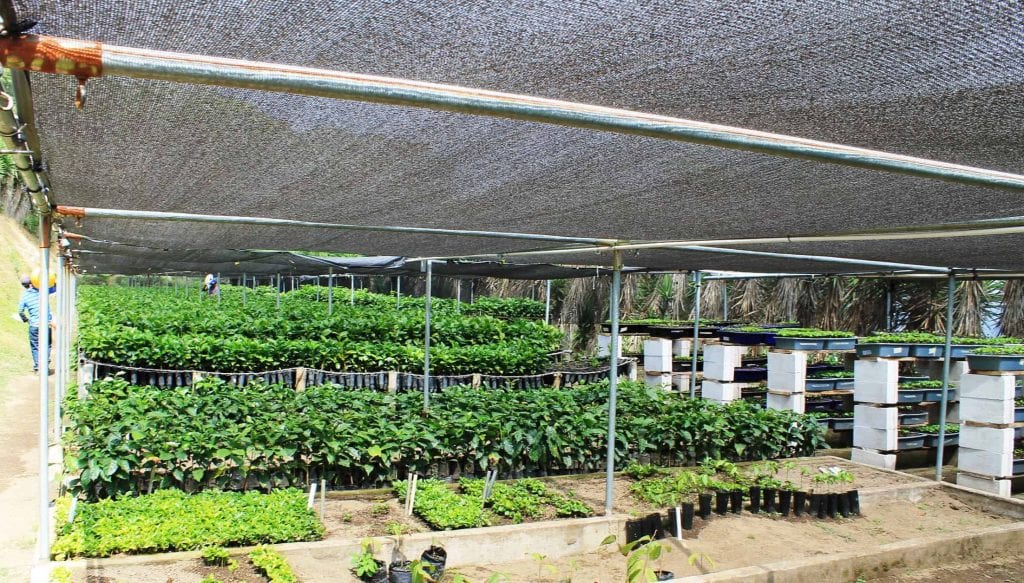 Over 35,000 new Pacamara trees being planted at Los Pirineos.

The Dry/Natural Process: The Method

The oldest method in existence, dry/natural processing is also the least complicated and requires the least machinery – in fact, it doesn’t require any mechanical equipment. The cherries need to be dried on beds or patios, where they will stay for days or even weeks, slowly hardening as they lose moisture. The dry pulp is then removed in the mill.

But natural/dry processing doesn’t begin immediately on specialty coffee farms. First of all, dirt, branches, and unripe or defective cherries must be removed. At Los Pirineos, this is done by briefly submerging the cherries in water. Good cherries will sink, while defective or unripe ones will float.

This is a critical step. A bad cherry can distort the coffee’s profile – and that cherry is much harder to detect after this stage. Producers do not want all the effort spent from here on, removing the fruit, drying the bean, and roasting it, to be wasted. Only once this has been completed can the cherries be dried.

At Los Pirineos, the cherries are dried on African beds; these raise the cherries off the ground and so are more likely to result in uniform drying. The cherries are also turned frequently for the same reason. At night, the beds are covered to protect cherries from moisture. During the day, some bed have partial shade cover. The cherries will stay here for 30-45 days, depending on the weather. 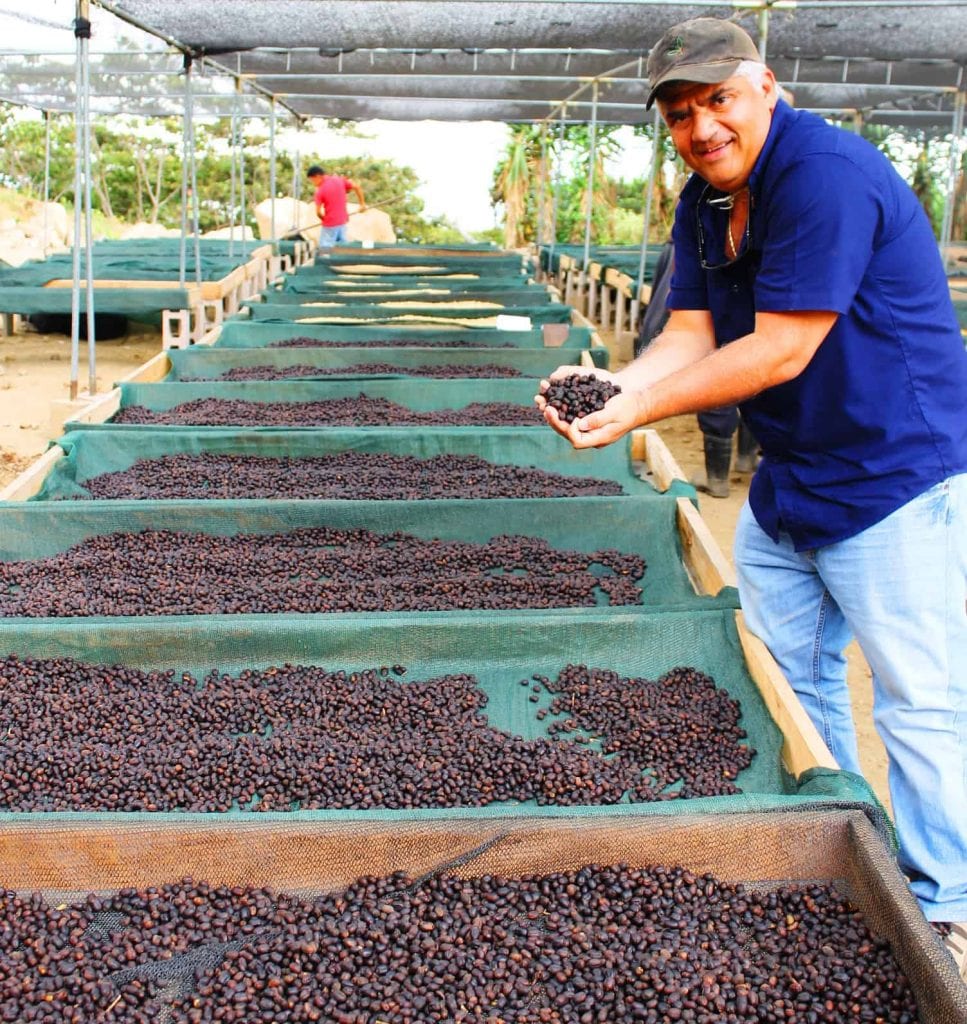 Gilberto Baraona demonstrates the natural/dry process. These cherries are under shade.

Naturals tend to be the fruitiest in flavor. They are full bodied and possess complexity in the cup. Los Pirineos’ naturals have been used by several different El Salvador Barista Champions, both in the national and world championships, and are the farm’s best-selling coffees.

Gilberto explains that he has experimented to find methods that will produce an extremely clean taste without any winey characteristics. He also says the great quality of his naturals is a result of his unique mill location: at the top of a volcano, in the east of El Salvador, and at high altitude. This produces optimal conditions for processing natural coffees. There’s no rain during the drying season, the high altitude lends coolness to the temperature, the beds are placed east to west to make the most of the sunshine, and the windiness means air is circulated around the coffees as they dry. 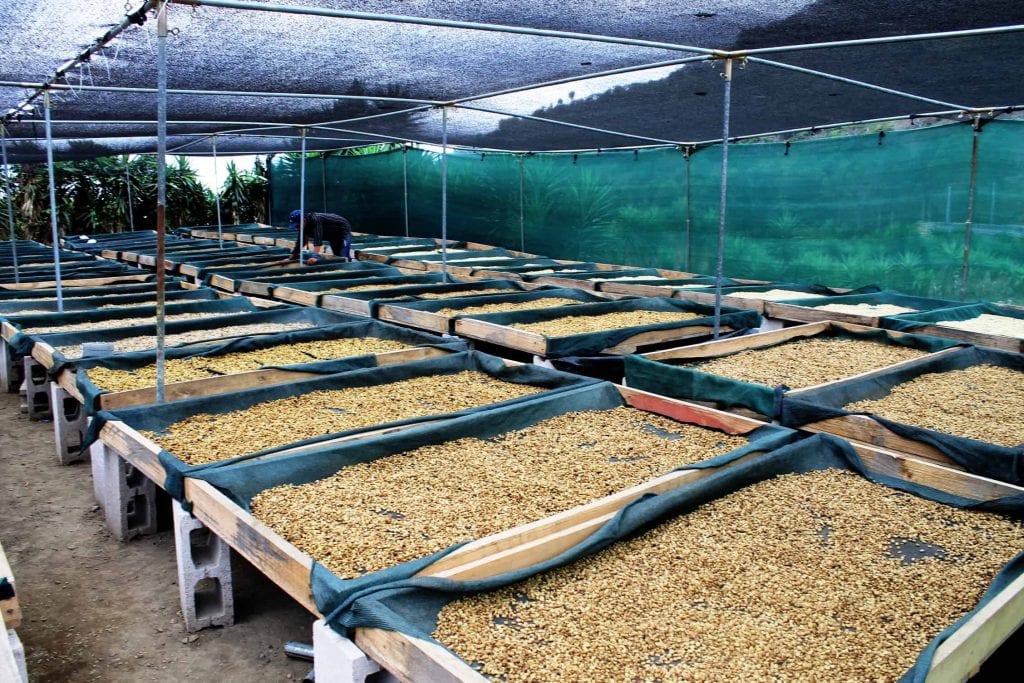 Coffee drying in the shade.

Wet or washed processing involves using a depulping machine to remove the pulp, or skin, then removing the mucilage with water. Los Pirineos uses two separate methods for removing mucilage: machine and fermentation tank. Removing mucilage by machine involves mechanical scrubbing. It’s easier and quicker than using tanks, in which microbes break down the mucilage. 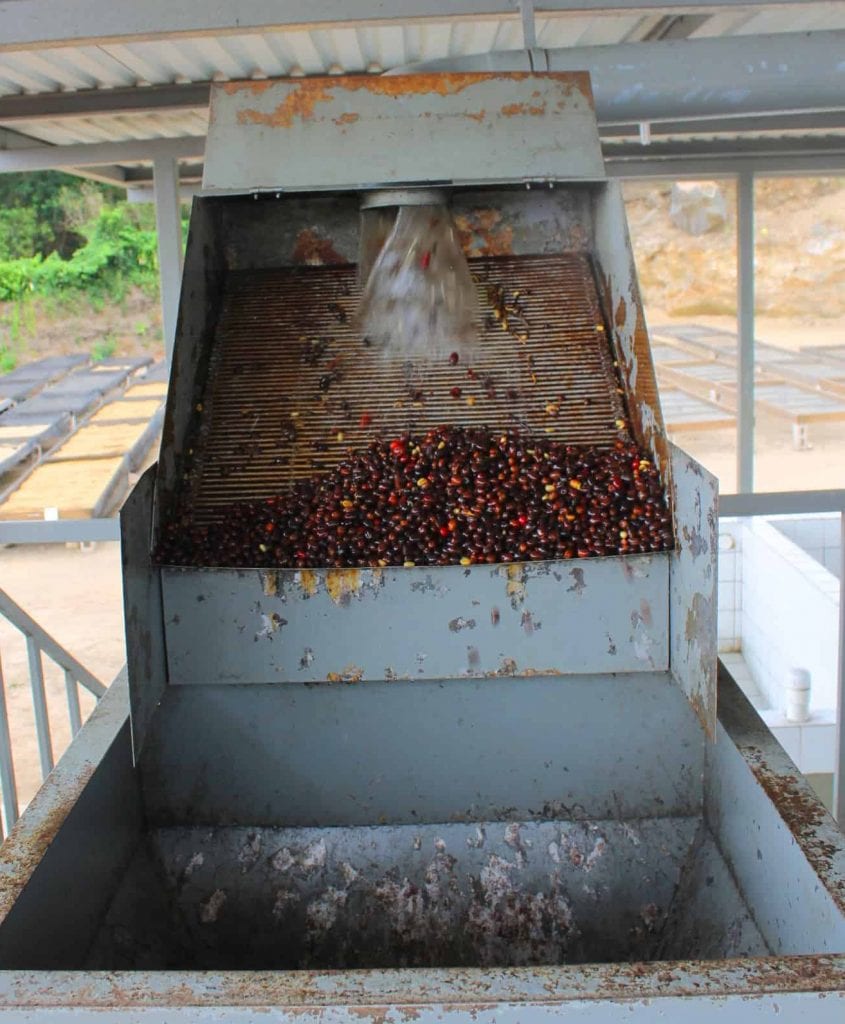 Mucilage being removed by machine. 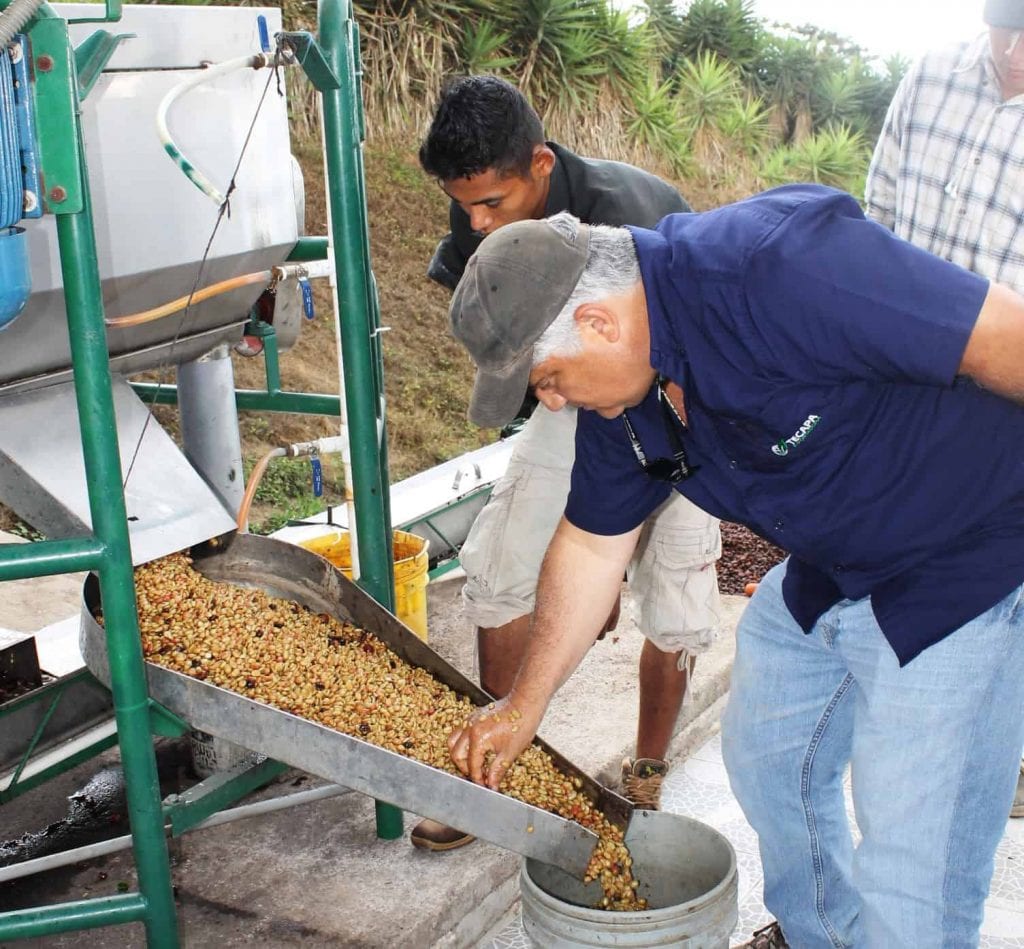 The mucilage has been removed by machine.

Simple washed coffees go directly to the African beds to be dried. The extra washed process, however, involves soaking the coffee a second time after the mucilage has been removed. This takes 12 to 24 hours. The process can prolong the coffee’s shelf life and also improve the quality. Gilberto tells us to expect greater clarity and acidity – and for them to look extremely clean during drying. 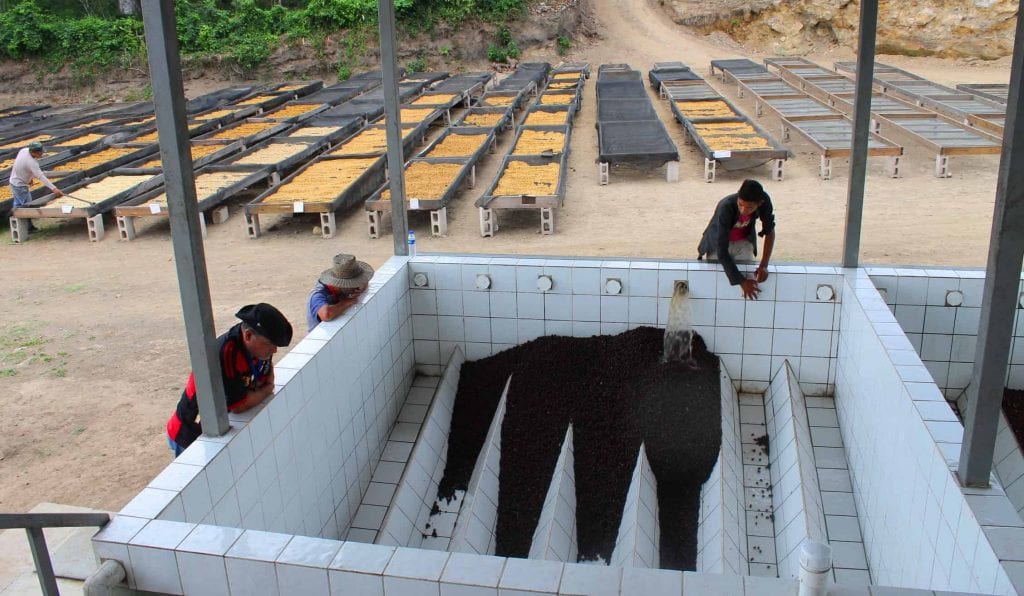 This final process is somewhere in between the wet and dry processing methods. The cherry is pulped, as in the first step of the wet method. However, instead of the mucilage being removed through fermentation tanks or a machine, up to 100% of it is left attached. At Los Pirineos, they don’t remove any of it prior to drying.

The coffee is then dried in drying patios or beds until it reaches the optimum moisture content of 12%. 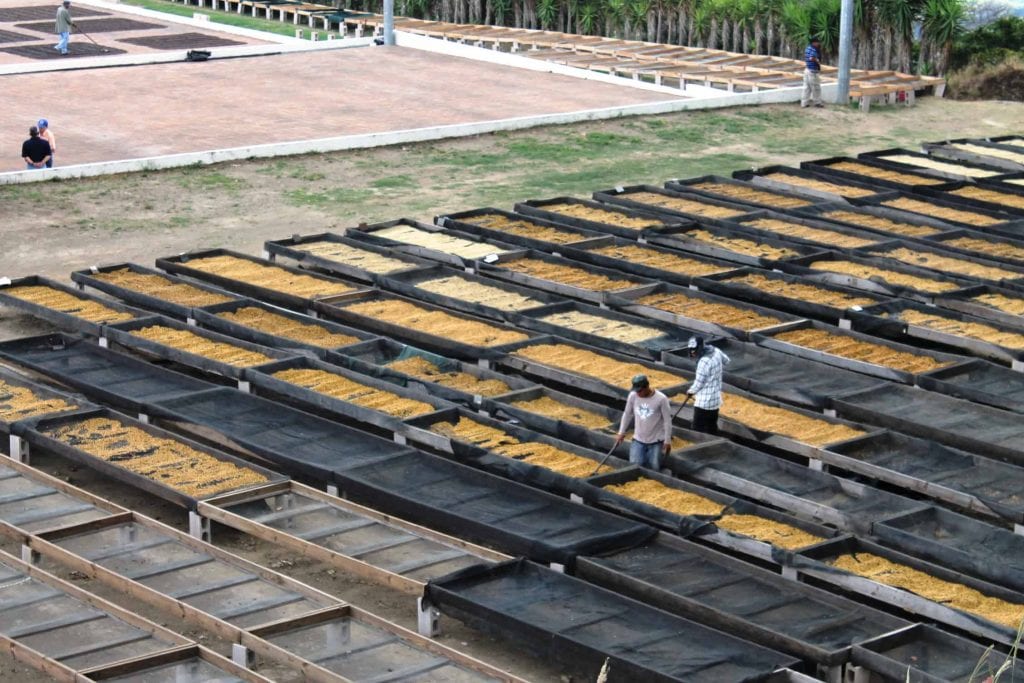 Honey coffees tend to be distinctly sweeter than other types, with more balance, less acidity, and a heavier body. There are also three different types of them, with three different profiles, based on how they are dried.

Los Pirineos produces all three types. Here are their methods:

Yellow honey: After being placed on the African beds with full sun exposure, the coffee is moved every 20 minutes for the first three days. After that, it is moved ten times a day. This coffee has a very sweet profile.

Red honey: After being placed on the African beds, the coffee isn’t moved for the first three days. Fermentation occurs, turning  the coffee red and causing the beans to stick together as if they were popcorn. After that, the coffee is moved ten times a day. The resulting profile is intense and sweet, with an aroma like molasses.

Black honey: This is similar to the yellow honey process, but it is done with full shade coverage. The coffee is moved every 20 minutes for the first three days, and after that ten times a day. Shade cover typically causes the beans to dry more slowly. This coffee is very sweet with a more chocolatey profile. 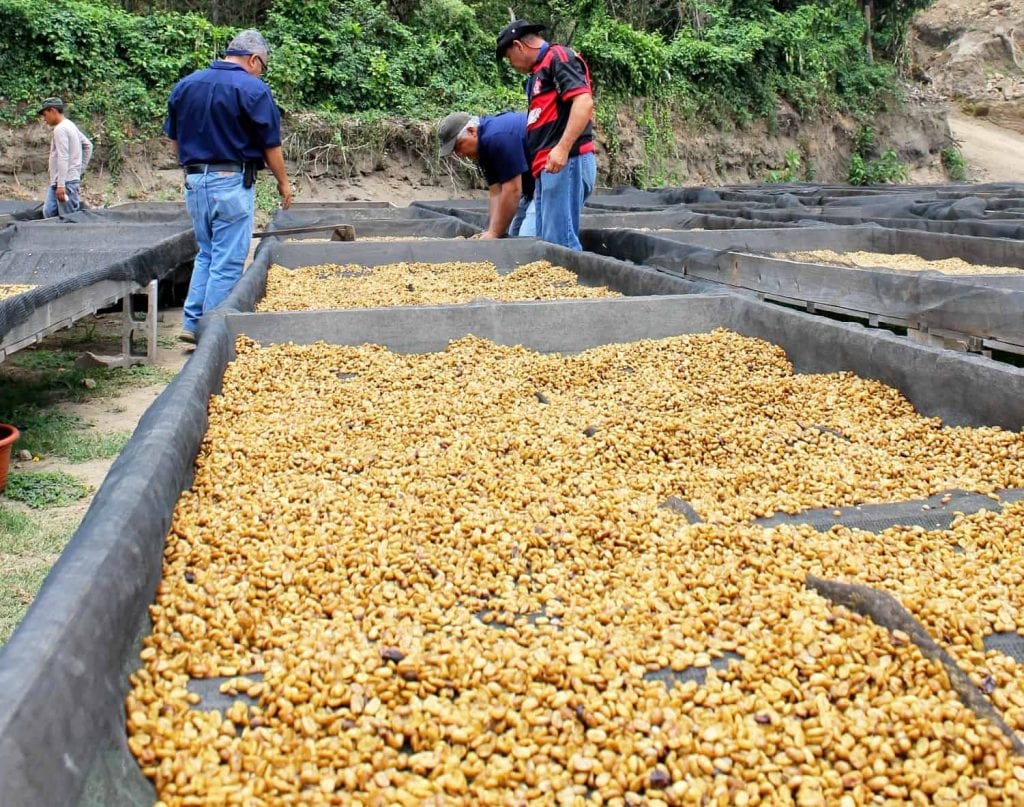 Having been processed, the coffee is dry milled, sorted by size, and then cleaned by machine or hand to remove any visibly defective ones. They are then bagged and exported. 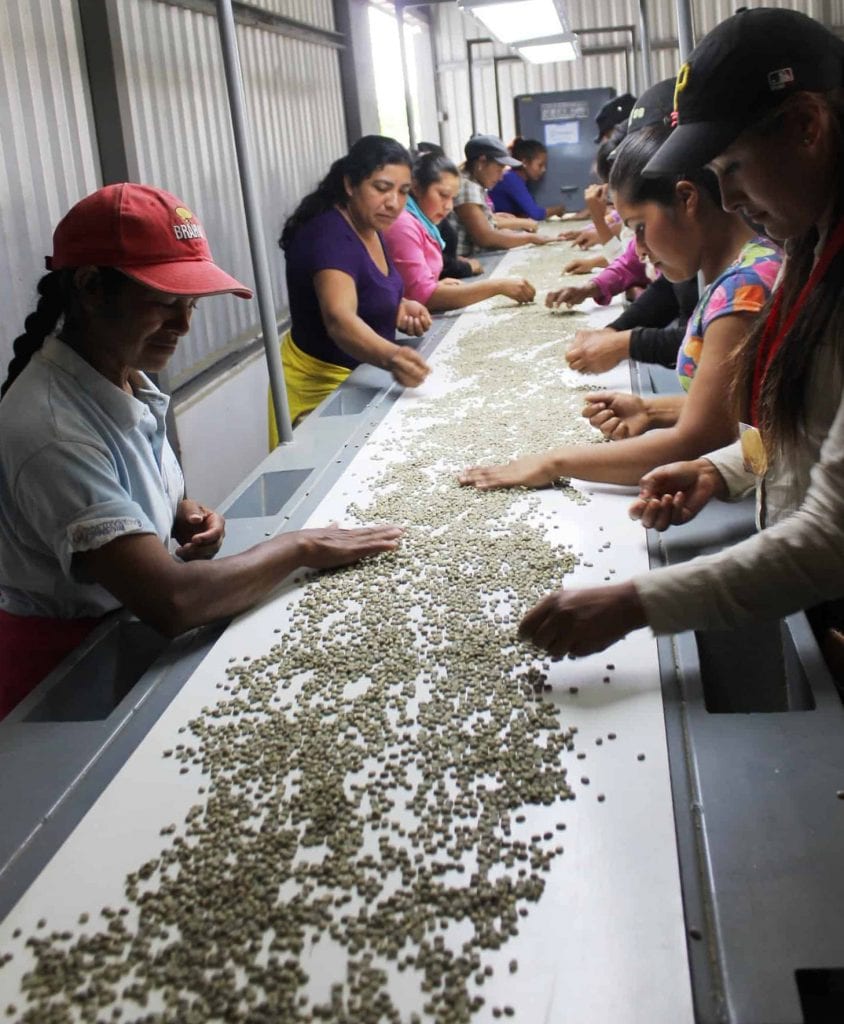 Which coffee processing method a producer chooses is a decision based on many factors: location, climate, varietal, resources, cost…

There are benefits to each method, and it’s a testament to Gilberto’s passion for coffee that his farm/mill uses this variety of ones. For him, coffees are like gemstones: all precious, but very different. And just like a jeweler must know how best to cut each type of stone, he says he has to know how best to process each coffee he grows.

It’s an attitude that has paid off in the excellent profiles of Los Pirineos’ coffees.

With thanks to Gilberto Baraona.

Janine is a contributor based in El Salvador