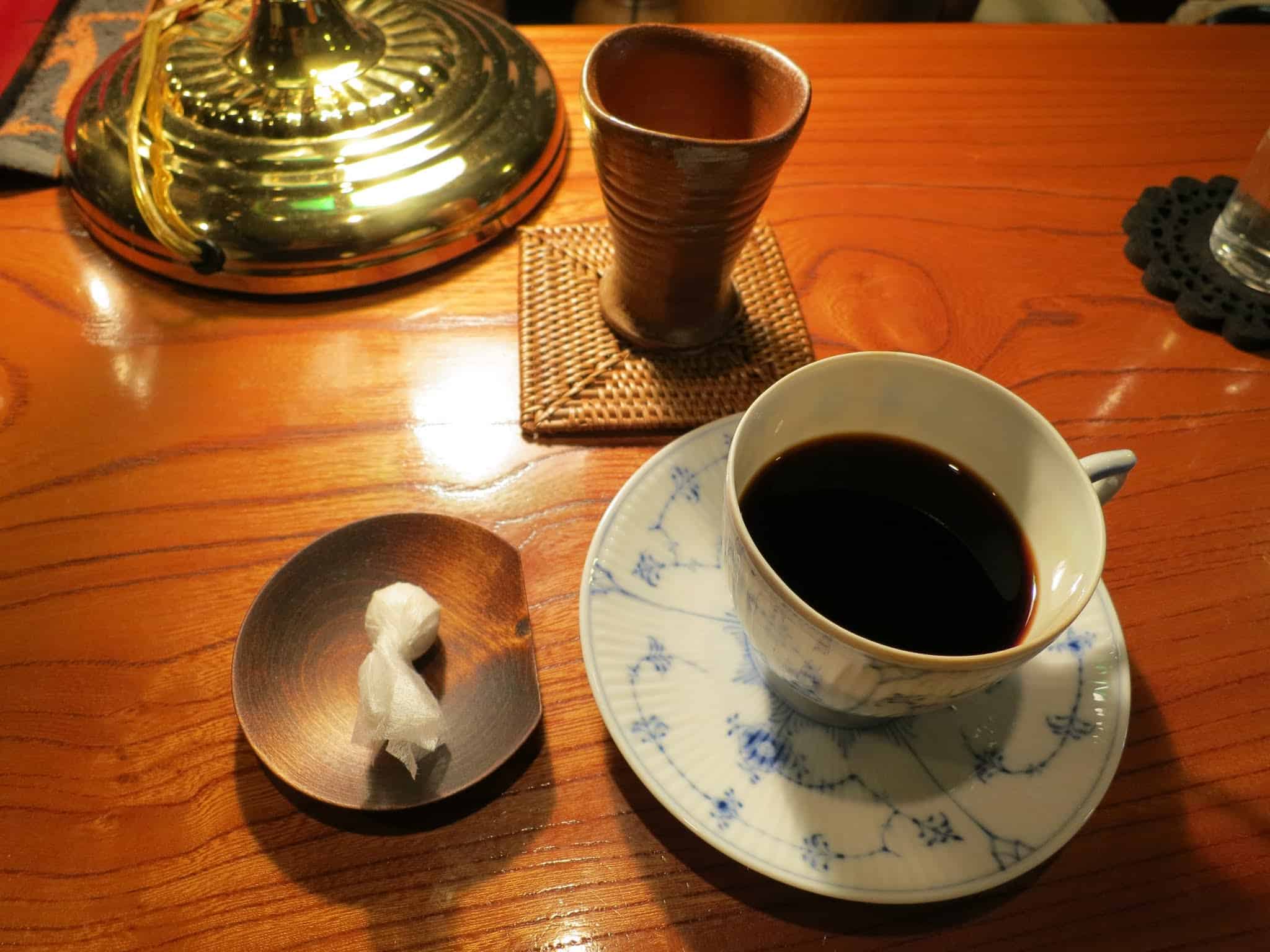 For coffee lovers, the Japanese coffee shop Cafe de l’Ambre is easily the highlight of a visit to Tokyo. It’s the kind of coffee house that changes the way you think about coffee – and I’m not exaggerating.

Cafe de l’Ambre is a place that makes you feel out of time. The green beans were picked 23 years ago. The grinder is from 1948. And the roaster is 102 years old. Yet the coffee is sublime.

We’ve written about Cafe de l’Ambre before, but what’s interesting now is that we’ve discovered its influence is spreading. With two disciples in Okayama Prefecture (and who knows how many elsewhere), this is a movement, not an anomaly. So let’s explore it.

SEE ALSO: Why You Have to Try Coffee Aged in a Wine Barrel 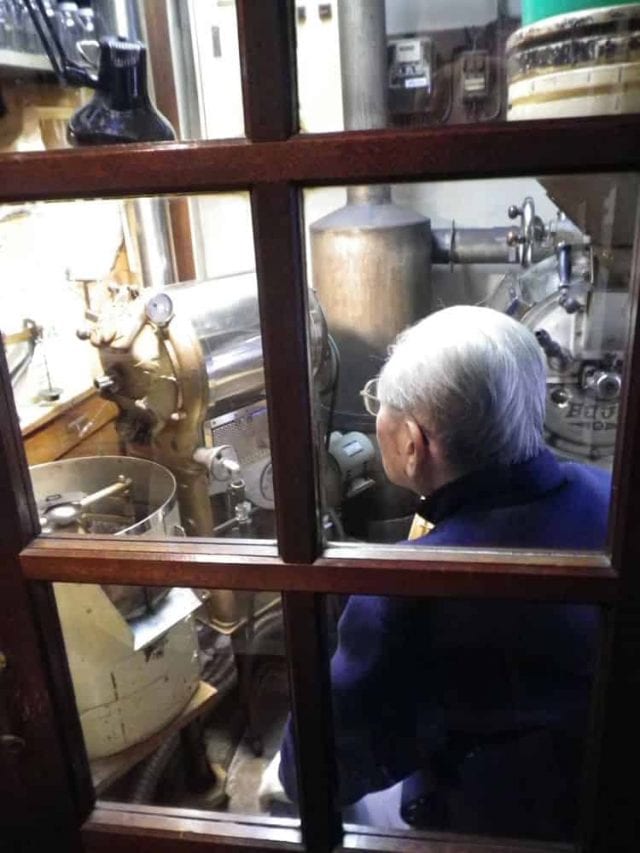 I asked Mr. Akagi for omakase, or “the chef’s choice”. Letting the roaster pick your coffee is a good thing to do in Japanese culture; it’s a great ice breaker. And what he prepared was somehow very similar to what I drank at Cafe de l’Ambre.

The coffee at Blue Mountain is freshly ground and weighed, the water is heated until it reaches the perfect temperature, and then the coffee is brewed using a nel drip and served in the finest china. These tiny cups are always full of rich, strong, and perfectly balanced coffee. You can taste the origin, no matter what you’re drinking.

When I asked Mr. Akagi about the resemblance to the legendary coffee served in Ginza, his eyes lit up. Yes, he said, he was indeed a fan of Ichiro Sekiguchi and his roasts. 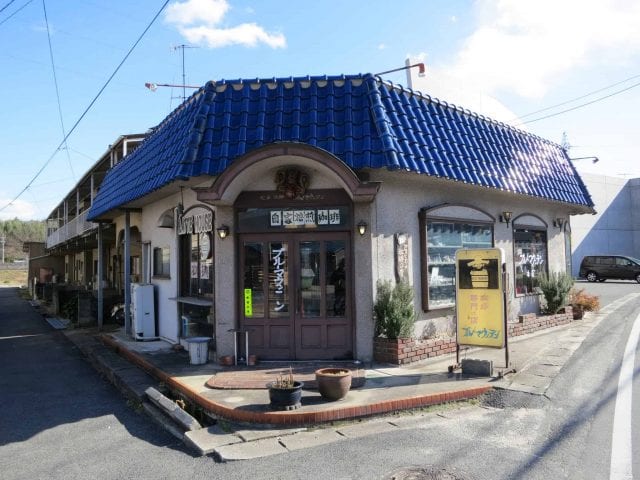 An Intimate Experience at Orizuru

Mr. Akagi rang the owner of a place called Orizuru to say that he was sending over a non-Japanese customer. And so off I went, curious to find out more.

Orizuru means paper crane in Japanese. It’s a tiny coffee shop, designed to serve only a few customers at a time, right in the center of Okayama City. And as you walk into this intimate place, yet again you feel like you’re leaving time behind. 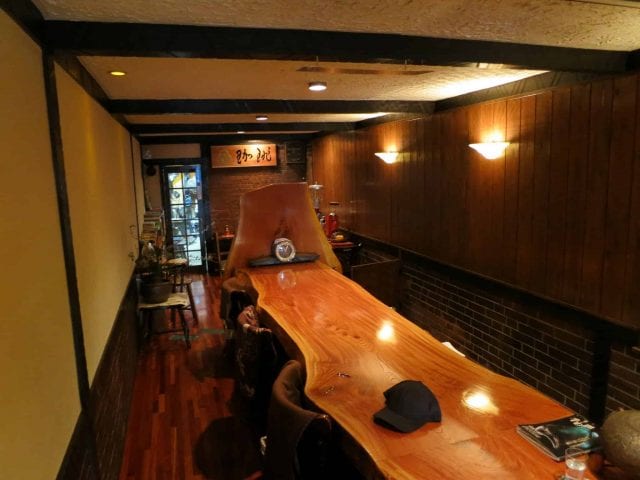 Time seems to stop inside Orizuru.

The owner, Mr. Fujiwara, studied roasting at Blue Mountain Coffee and carried on the tradition of using a nel drip. He’s also a world traveller who has visited Africa and Indonesia in order to learn more about his favorite beans. If he’s not too busy, ask him to show you his photo albums.

Sitting at the counter, which is carved out of one single tree, you might notice how much attention is paid to small details – much like in the Japanese tea ceremony. Preparing a cup of coffee is a slow process, particularly for the pour. Then, when the coffee is served, it’s accompanied by a smaller glass of the coffee that has been diluted. This smaller glass helps you to appreciate the essence of the coffee, and to prepare you for the stronger version. 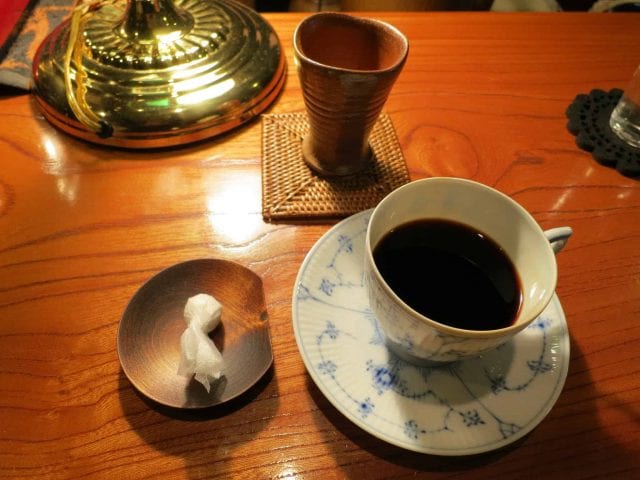 The presentation of the coffee at Orizuru.

I mentioned Cafe de l’Ambre, and then the iconic kettle used in the Ginza shop was produced from under the counter – it was as a prized possession for Mr. Fujiwara. He also showed me a precious demitasse made in Arita, before serving it exactly like the one I had in Tokyo.

Iced coffee is also prepared in the same fashion as in Cafe de l’Ambre – and let me tell you that the procedure is a real show-stopper. Coffee is brewed a bit stronger than usual, then poured into a metal cocktail shaker. Mr. Fujiwara then took a huge block of ice out of the freezer and almost quick-froze the burning hot coffee by spinning it in the melted groove. It’s a method that’s both impressive and effective. 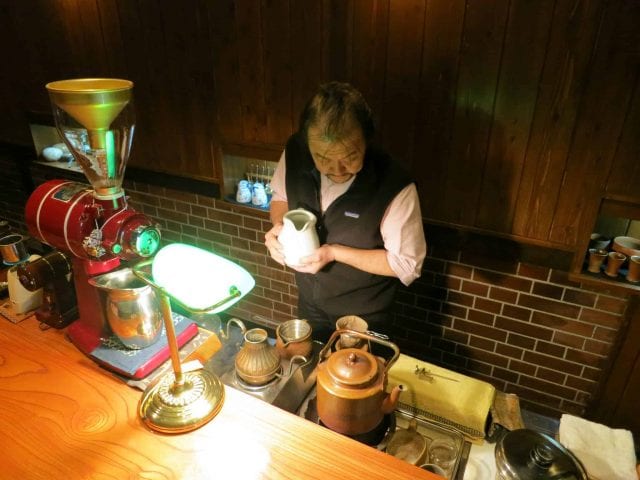 Mr. Fujiwara makes sure the water is at the right temperature.

Choosing Between Tradition and the Third Wave

Both Mr. Fujiwara and Mr. Akagi are aware of the third wave slowly making its way through Japan, not to mention the money associated with following trends. But they chose a different path.

This doesn’t mean that their coffee isn’t as good as the third wave’s – it’s just a different path to excellent brews. They decided that their coffee was a one-man show, that craftsmanship is more important than a line at the door. They have no staff to train, because they are the soul of their coffee shop. 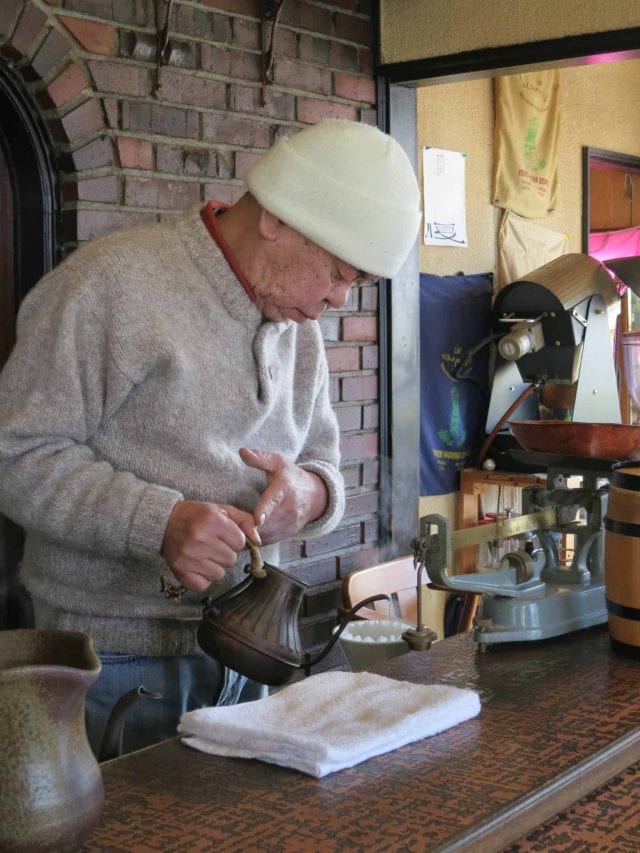 Mr Akagi experimenting with the Kalita Wave when it first came out.

Eschewing opportunities for growth may sound odd, but this way of doing business isn’t unheard of in Japan. Some restaurants will only prepare a limited amount of noodles – less than they are able to sell. Then when they run out, they just close down early.

Tradition over profit. Perfectionism over efficiency. Does it work? Yes. Coffee is Mr. Fujiwara’s and Mr. Akagi’s calling, and they are fascinated with using old roasters and experimenting with hand roasting. When you are crafting each cup by instinct, the human factor does makes a difference. And if you run a tiny operation, this obsession with precision and quality might be the way to make a real difference. 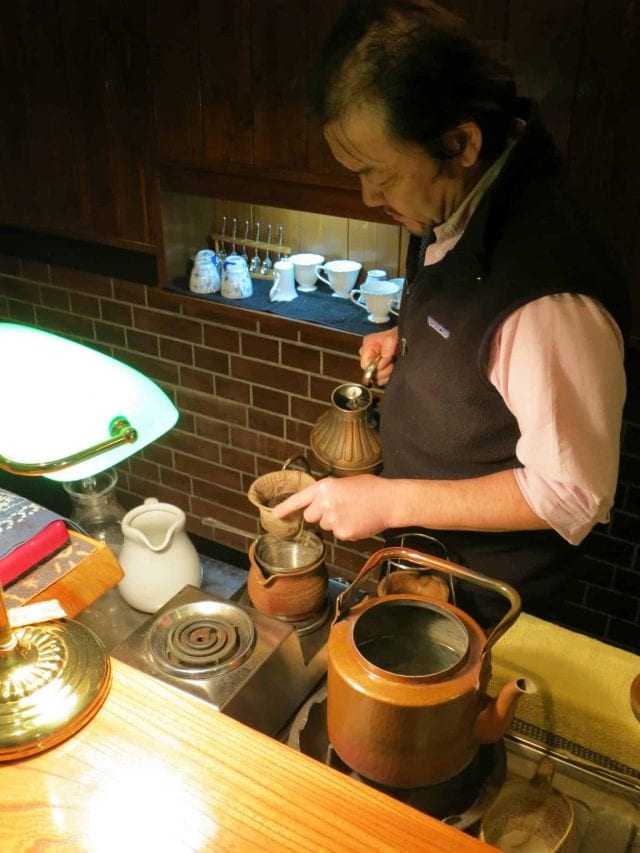 Mr. Fujiwara pouring into a nel drip. Notice the metal measuring cup placed into a bain-marie.

Lessons for the Third Wave

We’re not going to suggest that all third wave roasters wholeheartedly adopt this style of business – but there are definitely things to learn from it: the precision, the care over each cup, the open-mindedness…

What’s more, while the roast profiles might be darker than third wave standards, there are aspects of the roasting that I think we can all approve of. One of these is “just in time”, something that’s relevant to small roasteries. This means that they never pre-package coffee beans; instead, they roast only the amount that they can sell in the next day or two. It might be a lot more work, but it ensures that they offer only the freshest of beans to their customers.

Are you ready to bring your roasting and coffee preparation to the next level? If you are, observing these old Japanese masters is a good way to start.

Luc is a remote contributor

Roast Defects & How to Recognise Them
Honey processing: everything you need to know
What Is Bean Development in Coffee Roasting And How to Control it?
5 Times Baristas & Roasters Should Consider Breaking The Rules