There’s a new grinder in town, and boy is it causing a whirr.

The Sette (pronounced SET-ei, just like café) is Baratza’s newest offering for prosumers, a conical burr grinder. Yet this particular piece of equipment is very different to the traditional conical grinders that you’ve experienced to date. We all know how slow they can be, but the Sette’s as fast as it is light – which, at only 7 lbs, is saying something. And that’s not the only thing it has going for it, either.

Given this, it’s no surprise that the Sette was awarded 2016 Best New Product by the SCAA judges in the category of Consumer Coffee or Tea Preparation and Serving Equipment (Electrical).

We sat down with Kyle Anderson, President, Co-Founder, and Engineer for Baratza, to discuss the Sette and discover why they felt it was time to reinvent the wheel. 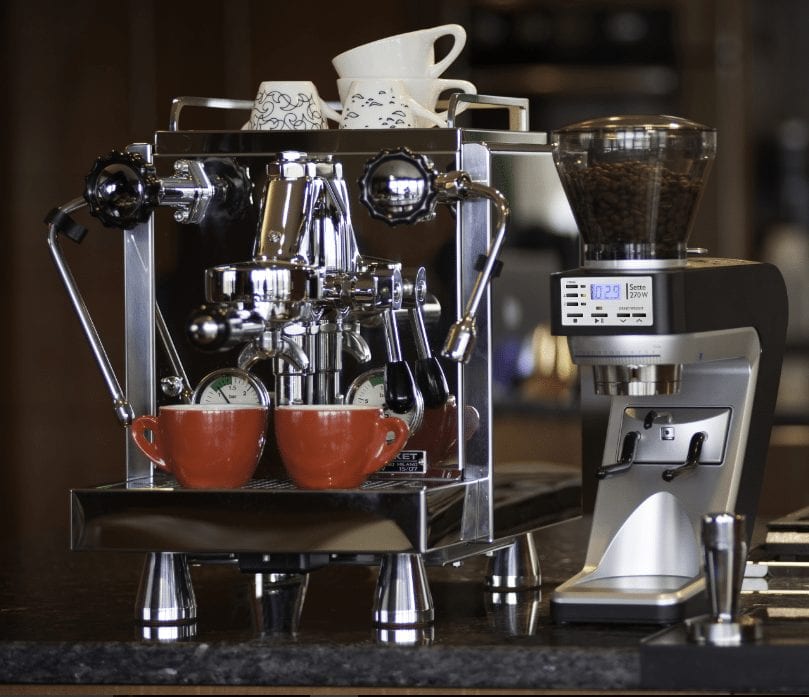 The Baratza Sette hits the magic trio of quality, efficiency, and style.

Baratza: A Grinder Specialist for The Third Wave

When you hear that Baratza’s releasing a new grinder, you know it’s going to be good – we just didn’t expect it to be this good. Renowned for their high-quality home grinders and small café grinders, they’re a household name in the third wave industry. So a new grinder from them is like a new iPhone from Apple – except the Sette actually has tons of new features.

Kyle’s very aware of their position in the third wave market, but he’s modest about it: “We are very fortunate to play in a swimming pool where there really isn’t a lot of competition, and to play in this pool and innovate to the point where the owners of the big commercial grinders will walk someone to our booth and say:  ‘I don’t have a grinder in this segment, but Baratza does.  You need to talk to Baratza.’”

It might surprise you to learn that Kyle hasn’t always been a grinder specialist. Kyle originally worked in land development, but moved to coffee when he realised it would give him the creative opportunities he craves. It was the right choice; not only has he seen great financial success but his passion is evident. 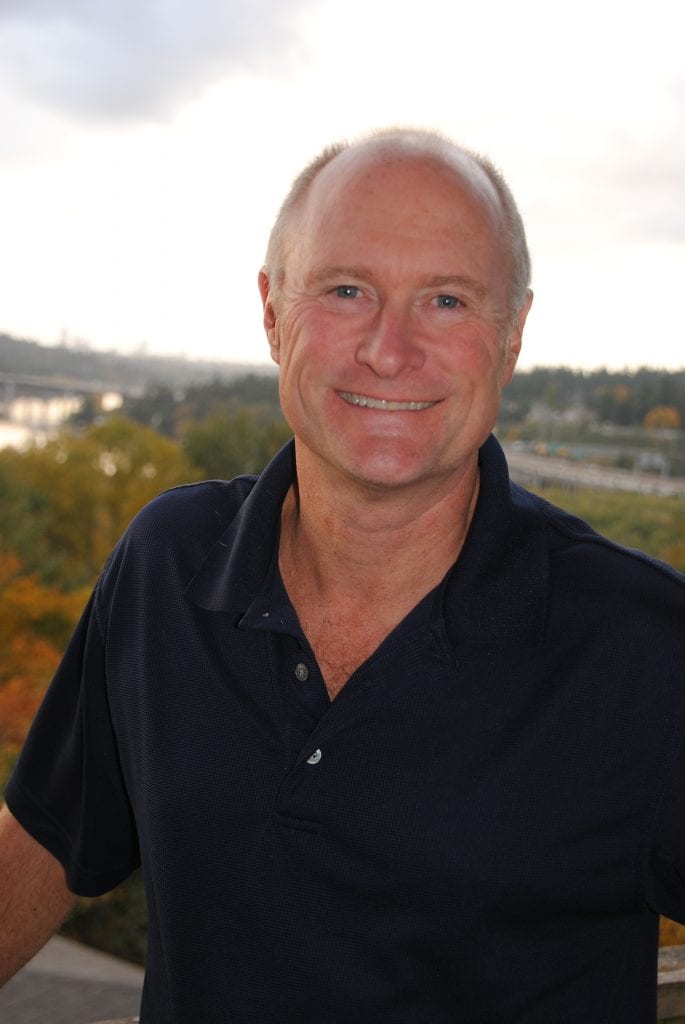 President, Co-Founder, and Engineer Kyle Anderson is passionate about coffee.

This was back in 1989 when he invented a fully automatic espresso/latte/cappuccino machine. It might be a commonplace technology now, but back then it was a game changer. In fact, they had patents in 17 different countries.

Then in 1999, Kyle helped form Baratza with the specific purpose of bringing espresso to household America – and in 2001, they decided to develop their own grinder. Fast-forward to 2004 and Baratza had a rebrand, becoming the grinder-dedicated company they are today. The Virtuoso, the first grinder fully developed by them, was launched in 2005 and solidified their place in the coffee industry: it’s still a big seller today.

And it’s in the third wave that Baratza thrives. “We are very, very clear that the thing we want to specialize in is high-end home use and right-size café use,” Kyle told me. “We are a small-footprint super-high-quality grind, which is ideal for the manual brewing that third wave cafes are doing. It’s the one place where cafés and Baratza really shine.” 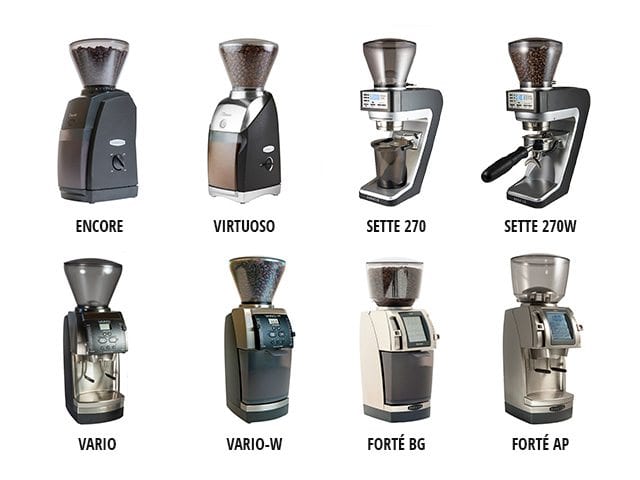 SEE ALSO: Barista Tutorials: How to Dial In Your Grinder in 3 Videos

Why Produce The Sette?

But what I really wanted to know was, with the impressive line-up of grinders that Baratza already has under its wings, why did they need another? Surely they’ve got all aspects of the market covered by their seven other products.

When I asked Kyle why Baratza was bringing to market a new grinder, he chuckled and then said, “First of all, I can. The second reason is that I want to, and the third reason… is that it’s time.”

Of course, my immediate question was why is it time.

Kyle responded with, “How many times can you do the same thing over and over? It’s time for a real shift in technology. We’re not the first to fool around with this but, with the tenacity of aeronautical engineer Christian Etzinger, we’re the first to market with it. We’ve raised the bar and everyone’s going to benefit.”

For Kyle, the Sette is Baratza’s version of thinking outside the box, of shifting the paradigm in grinding – although only by a little.

He continued to tell me, “We have plenty of great ideas for the future, but you don’t want to hit it out of the park and make something so different that you end up isolating your consumer because they just don’t see it. It’s not relatable.”

Intriguing… we’ll be keeping our eyes out for new products in the future, then. But Kyle and I still haven’t talked about what makes the Sette so revolutionary. 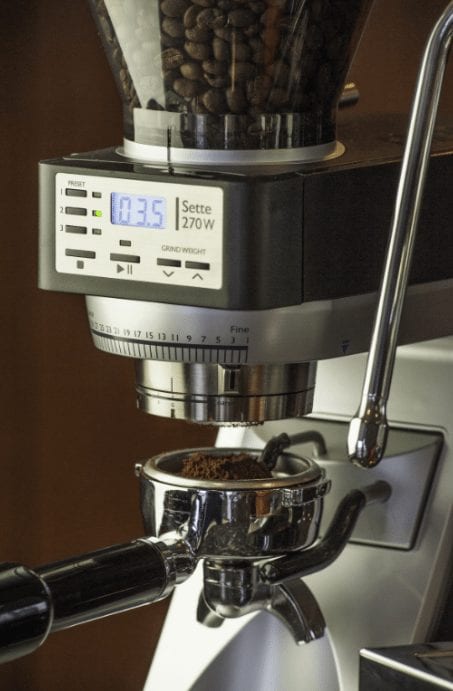 The Sette in action.

What Sets The Sette Apart?

The Sette has created new standards for simplicity, efficiency, and durability in grinders. For a start, there’s the speed. Traditionally, conical burr grinders are slow, but with grind speeds of 3.5g/sec for espresso and 5.5g/sec for filter coffee, this grinder finds its place in even the busiest of cafés.

And it’s not just the grind speed that will save you time on the go: a brand new grinding mechanism makes it more ergonomic and efficient than ever. Christian Etzinger, the engineer on this project, moved the grinding gear to the back of the burrs rather than hanging it beneath them. This innovative design opens up incredible real estate, allowing for grinding straight through from the hopper into whatever brewer you choose. Those seconds saved all add up. 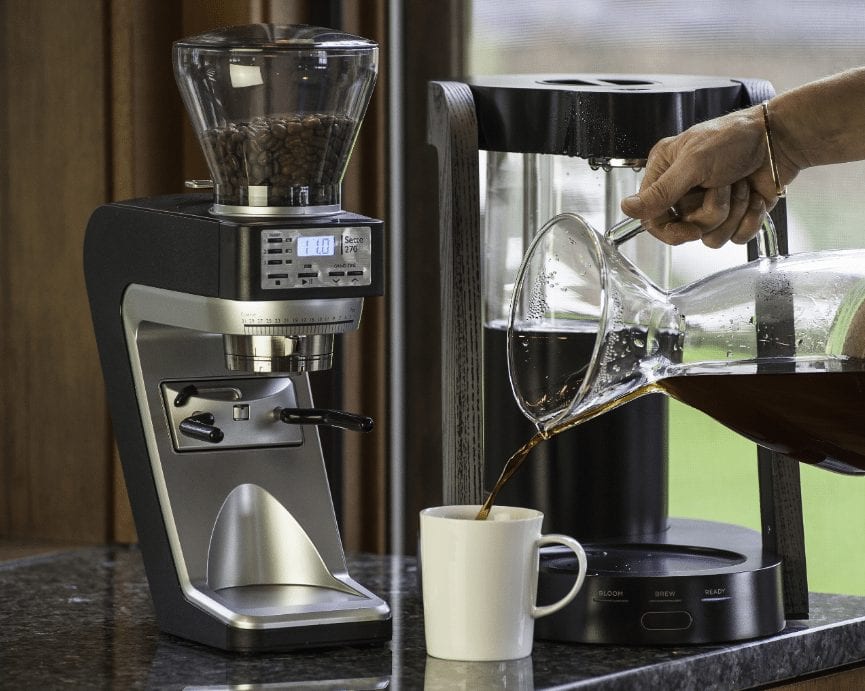 The Sette, easy to use at home or in the café.

This new design also makes it easier to clean. First of all, the cone burr assembly is easier to remove without tools, making accessing it for cleaning a snap. Secondly, one of the features that makes this design so superior is the active transportation of beans into and out of the grinder. Not relying simply on gravity to feed the grinder keeps ground coffee retention to a minimum, which in turn keeps your grinder cleaner.

As baristas, the ability to maintain a clean grinder is essential. We wouldn’t serve coffee from a dirty machine or in a dirty cup, and we also don’t want to grind beans in a dirty grinder. Nor do we want to spend a long time on cleaning our equipment.

These features aren’t just useful for the coffee professional, however. Home brewers will also appreciate how quick it is to clean and the ability to use it with any brewing device. Not to mention that, with its small footprint (only 7 pounds, remember!), it’s perfectly suited to adorning your kitchen counter.

In short, we’ve fallen for the Baratza Sette. It’s a stylish, time-saving piece of equipment that will make our lives easier without compromising our coffee quality. So that’ll be one each for the entire PDG team, then…

Avoid Losing Your Cafe: Protect Your Business in Under One Hour
Mediterranean Love: A Specialty Coffee Cocktail Recipe
Why is staff turnover an issue for coffee shops?
Lever Romance: How I Restored a 70-Year-Old Espresso Machine