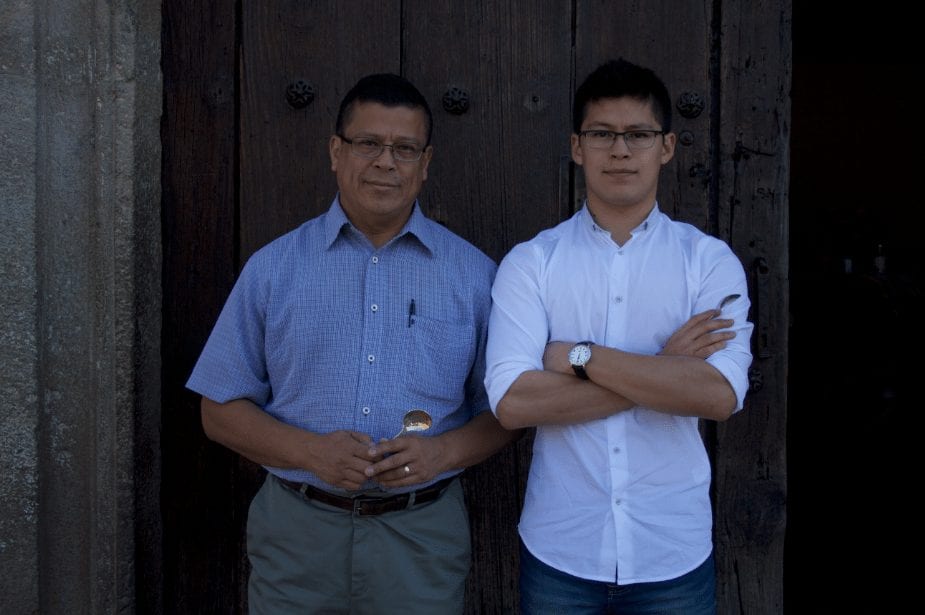 Coffee may be one of its biggest exports, but this Latin American nation doesn’t yet have a strong specialty coffee-drinking scene. The De Leóns are concerned that its best coffee is only being drunk in other countries, and so are dedicating their lives to changing that. They do so by working towards coffee education and the creation of a coffee culture.

Both experienced cuppers, they also run Castell Café. For there, they prepare gourmet coffee from different regions of the country, using a variety of brew methods.

Father and son, both set to change the coffee industry in Guatemala.

We sat down with them for a chat about their coffee stories, along with what they hope to achieve for specialty coffee in Guatemala.

I began when I was 18 years old in Anacafé, in the tasting laboratory. I had to clean and organize the laboratory. That’s where I learned how to taste and roast coffee.

After a year of working there, the assistant position became available. In order to be eligible for it, I had to pass several tests conducted by Anacafé’s Master Tasters (expertos). Because I did not have much experience, I began to learn on my own, studying with the few books that I could get hold of.

The most difficult part was learning by my own means, without many books or much information to study, and visiting the farms to learn about seeds and the ports for exports. When cleaning up, I would taste what was in the cups and it compare it with notes from the taster.

For the first few years, I was really careful to look after my palate: I didn’t smoke, I didn’t drink alcohol, and I avoided food with strong flavors and smells. I also tried to not touch chemicals or substances that left a scent on my hands, so that I wouldn’t contaminate the coffee I worked with.

I began my own tasting laboratory in my house when I didn’t have a job. My wife supported me a great deal and we soon also began to roast coffee. Soon, I had a lot of clients and several farms looked to me to taste their coffee.

Then in 2001 and 2002, our El Tempixque won the Starbucks Special Reserve award. This, in turn, really helped me to obtain more clients and demonstrate what I was doing. I also placed sixth in the 2011 World Cup Tasters Championship at the SCAE World of Coffee in Amsterdam.

I have the privilege of working with my entire family. I am still tasting but now we have Castell Café, with stores in San Lucas, Sacatepéquez, and Antigua, Guatemala, and we’re looking to offer the best coffee in the country.

From a young age, I learned about coffee with my dad. I went with him to the farms, I helped out with packing coffee, and so on. That’s when I realized I wanted to work in this world of coffee.

At 15 years old, my dad began to teach me how to taste. Little by little, I learned the different things about coffee: the varieties, its processes, the flavours, and the drink preparation.

When I was 17 years old, my dad took me to the SCAA (Specialty Coffee Association of America) convention and that’s where I met one of my dad’s bosses. He invited me to work with him, learning to taste coffee from around the world.

After earning these certifications, I traveled to Honduras and Mexico and explored the lives of small producers. I realized how difficult their lives are. They are very poor people with little education. I was inspired and wanted to work with such producers.

Afterwards, I continued traveling to different places, getting to know baristas and coffee shop owners, learning the prices of coffee, and everything else I could about the world of coffee.

Along with my family, I work for Castell Coffee. We focus on the quality of the coffee. Everyone that works there is a barista or taster. Every week we have a different reserve so that our clients can get to know the varieties that our country offers.

I also have ideas for other projects that would bring information about our coffee to everyone, so that a wider audience can know that the best coffee in the world is harvested in Guatemala.

T. Schrock is a contributor based in Argentina.

What is carbon-negative coffee?
What Is Terroir and How Does It Affect Your Coffee?
Why do coffee plants flower & what does it mean for producers?
Post-Harvesting Myths That It’s Time We Stop Believing