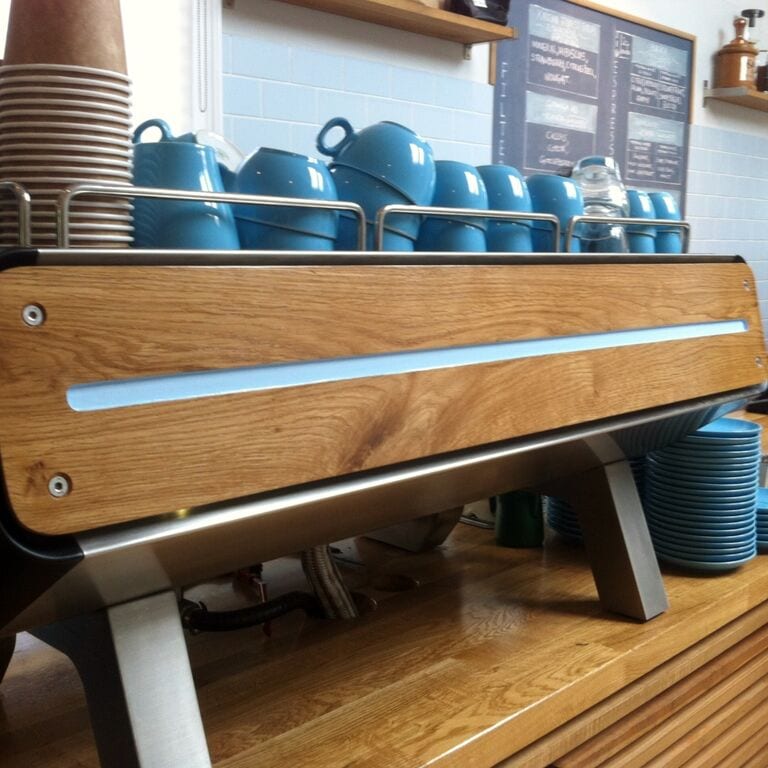 You’re all set and ready to launch your new coffee shop. You’ve found a great location. You’ve decided on most of your equipment. You’ve even planned the look and feel of the space. But there’s just one thing you haven’t done. You still need to purchase an espresso machine.

This is NOT an easy decision. In fact, this is one of the most important decisions you’ll make. But never fear, good friend. We’re going to guide you through this potential minefield by highlighting the eight decisions you need to make about your machine. In this way, you’ll be able to narrow down the best espresso machine for your business.

The espresso machine as we know it is a modern piece of equipment. It wasn’t until the advent of heat exchangers in boilers (in the post-war period) that espresso started to taste like it does today.

Heat exchanger based machines are common. By running heat exchangers full of brew water through a steam boiler, they produce water at the perfect temperature for coffee. By perfecting of the length of the tubes and the way the hot water circulates through the system, it can also provide steam for texturing milk.

In recent years, the single-boiler heat exchanger machine has seen competition from machines with separate boilers for brew water and steam. These multi-boiler machines can precisely control temperature. The main downsides of multi-boiler machines are increased complexity and expense and the fact that brew water idles in a boiler rather than being drawn fresh from the mains.

Let’s assume that we’ve settled on a multi-boiler machine for a medium-sized shop. How do we narrow down which machine fits the bill?

Whilst an enormous four-group machine may look impressive, remember to be practical. It’ll be expensive to run and totally overkill for all but the busiest of coffee shops. If your projected volume is less than 40kgs per week (or, to put it another way, around 2,000 espresso-based drinks per week), you should opt for a two-group machine.

If you have your heart set on four groups, though, consider purchasing a pair of two-group machines (if funds allow). This will provide some flexibility should one of the machines malfunction.

You need (temperature) stability in your life

Whilst many multi-boiler machines look similar on paper, their ability to produce brew water at consistent temperatures varies greatly.

Almost all modern multi-boiler machines will have a PID (proportional-integral-derivative) controller taking care of brew boiler temperature. In simple terms, PIDs regulate the temperature of the water in the boilers, but they do this with much greater precision than the traditional thermostats. They also enable users to set a specific temperature for brew water. Some older La Marzoccos did without PIDs but, should you be considering something like a used Linea, they are easily retrofitted.

Given that most multi boiler machines use similar PID controllers, any variability in temperature stability can be a consequence of other factors. Of these, I believe the most important are grouphead design and the mechanism by which fresh water is fed to the brew boiler.

It’s all in your (group)head

A poorly-designed grouphead will either suck temperature out of the brew water or become too hot and scald the grounds. So what’s the solution?

Recently, the saturated grouphead (and variations of that) has found favour due to its superior temperature stability. This type of grouphead is bolted directly to the brew boiler and hot water is allowed to flow through the open neck of the brew boiler into the group.

A third and even more precise solution is to place a heating element in the grouphead itself, allowing users to control the temperatures independently of brew boiler temperature.

In reality, any of these three systems, when properly implemented, will provide sufficient temperature stability. It’s only the lower end machines that suffer from variations in brew water temperature great enough to affect the taste of the espresso

Multi-boiler machines have relatively small brew boilers (often one for each group). Early versions (and a few current ones) feed fresh room temperature water directly to these boilers.

Under heavy use, the brew water is a combination of heated water and this fresh water that hasn’t had time to heat up. The result is a reduction in brew temperature over a series of shots. This can lead to consistency issues in a busy coffee shop.

One solution is to run pre-heated water through a heat exchanger before it reaches the boiler. Most multi-boiler machines have this feature, but many only offer it as an option. The extra expense of specifying pre-heaters is definitely worthwhile.

We’ve narrowed down the shortlist of machines to ones with good grouphead design, PID-controlled multi-boilers, and preheating of the fresh water feed. Now it’s time to examine other factors that influence the quality of the drinks produced and the efficiency of the process.

Pre-infusion involves the machine wetting the grounds at a low pressure before ramping up to full pressure. It minimises the possibility of channeling and fines migration, which can block the basket and slow extraction.

Upper-end machines allow the pump pressure to be controlled throughout the course of the shot. This is known as pressure profiling. Others use flow profiling; the flow of brew water is manipulated, to similar effect, via variable restrictors.

Most machines with pre-infusion capabilities have a simpler system. Here, only the first few seconds of the extraction can be set at a lower pressure. Sometimes this is adjustable, in terms of length, but more often it is fixed.

Fixed profile machines that offer a similarly long initial pre-infusion have many of the advantages of a variable pressure machine – but they deliver them without increased complexity and costs.

An automated shot processcan speed up workflow whilst maintaining shot consistency. If this appeals to you, you have two options: gravimetric machines and volumetric machines.

Gravimetric machines weigh the output dose of a shot being pulled using scales built into the drip trays and connected to a control unit. When the programmed brew ratio is reached, the control unit stops the shot.

Manually managing this process for many groups is resource intensive and tricky during busy periods, so automating this should be worthwhile. Unfortunately, the technology works well in some scenarios but struggles in others.

A simpler solution is a volumetric machine. These contain a flow meter that measures the volume of water dispensed, then stops it at a point set by the user. Although in theory this is less accurate than a gravimetric system, in practice it can work effectively. Be warned that soome machines seem to have better volumetric capabilities than others, so always testing this functionality before purchasing.

It’s possible to run a high-volume coffee shop whilst manually weighing inputs and outputs. This is still the most consistent way to make espresso, as long as the baristas are well trained. But as gravimetric and volumetric machines are perfected, they may become more precise and attractive option.

The final important elements are aesthetics. Your espresso machine acts as a signifier of intent, so it’s vital that it matches the ethos of your shop.

Only a minority of customers will be interested in the technical details of your specific machine. However, a large proportion will have knowledge of the types of machines found in cafes. A who might be waffling over whether to come into your shop, can be drawn in by a “good” machine.

The only caveat here relates to what I call “over-speccing” or terms, or purchasing the most complicated, expensive machine because it is seen as best. This can lead to unnecessary expense with no benefits. It can also impact coffee quality if the user doesn’t understand the complexities of the machine.

If you intend to run a high-volume shop with a single, blended espresso, then a pressure profiling machine is probably overkill. If your primary products are high-end single estates and single origin espressos, then it makes sense to purchase a top of the range machine.

No matter the type, espresso machines make a very big dent in the set-up costs of a new coffee shop. Despite this, they are surprisingly economical. With regular servicing and suitable filtration, a good machine can generate plenty of income during its lifespan. Not bad at all, given that it’s just a water heater and pump.

Exploring Some Of The Factors That Influence Café Design
Keeping Your Coffee Shop Clean & Safe
SCAE Members Vote IN FAVOUR Of Unification!
Why should the espresso machine be the centrepiece of your coffee shop?