Perfect Daily Grind > Other Essentials > The Flat White & the Fake White: Can You Tell Them Apart? 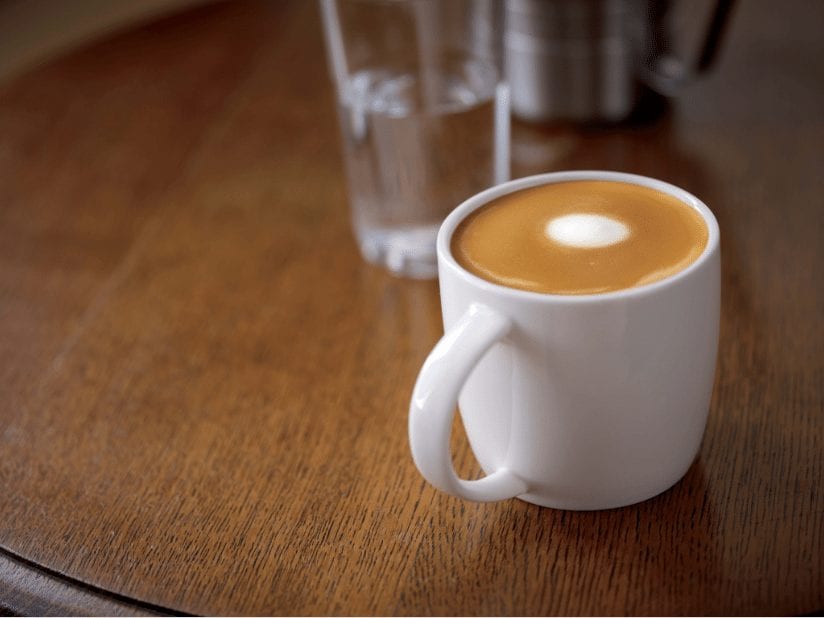 It’s mysterious, hip, and what everybody seems to want. It can cause consternation for baristas who don’t actually know how to make it. It’s grounds for a fight between Aussies and Kiwis, both of whom want to claim it as their own—and have a different recipe for it.

Yes, you’ve got it: it’s the flat white.

Yet just because you’ve recognised the description of it doesn’t mean you could pick the drink out of a coffee line-up; if there’s one thing that characterises this coffee, it’s that no-one seems to know what it is.

We’re here to fix that. Read on as we tell you everything you need to know about this cool, enigmatic, and utterly delicious drink.

As the flat white becomes increasingly popular, more and more coffee shops are beginning to serve it—yet not without risk of causing controversy. This drink, often described as a small latte, offers a richer taste of coffee and comes without the thick layer of foam you get with a cappuccino. But is it made with one or two shots of espresso? Is it served in a glass or a ceramic cup? What’s the perfect size? And, the most important question: where did it come from?

Where Did the Flat White Come From?

The origins of this drink are highly debated among coffee enthusiasts. It certainly came from the Antipodes—but where exactly? Australians claim the beverage is quintessentially Aussie while New Zealanders insists it’s a Kiwi invention. And if you’re brave enough to ask the native baristas, be prepared for heated discussion; neither country is willing to step down on what seems to be a matter of national importance.

It’s bad news for Australia, though, as New Zealand seems to win this debate. Australia’s espresso culture evolved quicker, leading to an earlier introduction of drinks like cappuccinos and lattes. Kiwis, on the other hand, loved their strong, long blacks. Reluctant to give them up, they started to serve a similar coffee made through an espresso machine—and the flat white was born.

This drink probably became popular around the 1980s, when coffee drinkers began to demand a coffee that was simultaneously less milky, so that they could still taste the espresso, and yet possessing that creamy mouthfeel that’s characteristic of frothed milk. The flat white was the perfect solution, and it became the cornerstone of both Aussie and Kiwi coffee culture.

Since then, this delicious drink has slowly made its way across the sea to independent coffee shops across Europe and the USA. Often, it was baristas from Australia and New Zealand who moved away and introduced their beloved drink to local coffee shops—and we are so grateful that they did.

However, while baristi brought the flat white with them, they certainly didn’t bring a definitive recipe. Every single coffee shop tends to serve this drink differently. And if you think this mystery makes it difficult for the barista, think about how it makes the consumer feel: ordering the milk-based drink today seems to demand either casual, effortless self-confidence or some secret coffee wisdom.

So What Exactly Is a Flat White?

At a first glance, you might question the difference between a flat white, cappuccino, and latte. All three are espresso based drinks, topped with frothed milk and a layer of microfoam.

A latte, however, is usually served in a bigger cup containing around 8oz, while the ideal size for a cappuccino and a flat white is a ceramic cup containing 6oz or a little less.

Latte? Flat white? Cappuccino? Almost impossible to tell, unless you know how it was prepared… Credit: @olivebranch91.

When it comes to espresso shots, the cappuccino and the latte can be served with one or two shots of espresso, while a flat white is traditionally served with two shots—if you’re a New Zealander. Some Australians will opt for the single shot option. And then, some baristas even say that it has to be a double ristretto, offering a more concentrated flavor than an espresso.

So to recap: the flat white is usually smaller than a latte, and made with two shots of espresso or ristretto, making it a rather concentrated drink.

Is it one or two shots of espresso for a flat white? Even Australia and New Zealand are divided on the matter. Credit: Flickr, Scott Schiller.

But what about the milk? Now this is the actual difference. The flat white was created for people who wanted a creamy coffee experience without heaps of foam topping their cups. I asked Joe Molloy from Rumble Coffee Roasters and he gave the perfect description:

“Thin milk, strong coffee, no real foam to scare people off. The type of coffee my Dad would order.”

A flat white offers a straightforward option with a strong taste of coffee. That’s why it’s is made with a small amount of frothed milk and only the thinnest layer of microfoam that’s, in contrast to the cappuccino, just enough to create some latte art.

It’s all about the milk. Only very little foam is needed for a flat white. Credit: Flickr, Angie Chung.

Rising Popularity of the Flat White

So now you know how the drink is prepared. Yet one question remains: why is it so fashionable?

The number of orders for this drink have noticeably gone up over the last year, whether in the UK, the USA, or over here in Germany. As third wave coffee continues to thrive and customers show growing interest in their daily coffee, drinks which allow you to taste the espresso are taking over from ones that simply serve as a quick caffeine fix.

Starbucks have also picked up on this trend. The began offering flat whites in their UK and Australian branches five years ago and, this year, began to serve it in the USA as the “bold” alternative to latte. (However, the Aussies were not too happy about Starbucks’ attempt at the flat white, forcing the company to completely abandon it in the Australian market.)

Their flat white is being sold with two shots of ristretto in all current cup sizes, which seems to ignore the rule that a flat white should be a small drink. However, if you wanted authenticity, you could order a “short” flat white and receive an 8oz drink.

So it seems like the legend of the flat white isn’t such a big mystery after all. With the demand for less milky coffee and the rising interest in the taste of espresso, the flat white is the perfect option.

But let’s be honest, the differences between a latte, a cappuccino, and a flat white are very small, and a lot of coffee shops will serve either a latte or a cappuccino instead. For most, all these drinks are just “espresso, milk, and foam”.

But now that you know how an antipodean flat white is prepared, you can confidently walk up to the counter and order one yourself. And if you’re interested—and don’t mind risking a debate—why not ask the barista how they prepare theirs?

Love the flat white? Terrified of it? Or d’you strongly believe that you know the best way to make it? Tell us about your flat white experience in the comments, on facebook, or on instagram.

Olivia is a contributor based in the UK