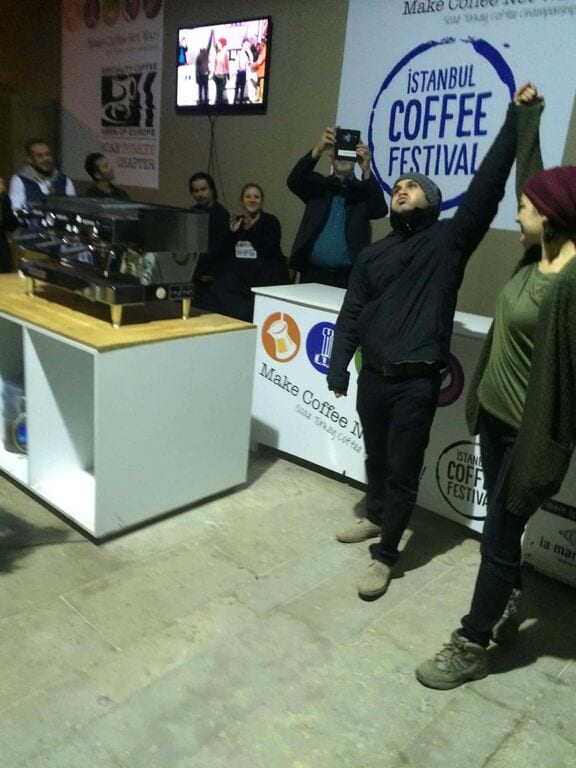 When you think of a Barista Champion, what do you imagine? A barista who is surrounded by coffee 24-7? Whose hands are always covered in grinds? Who is on first-name basis with the producers after their million trips to origin?

Well, think again – because this World Barista Championship (WBC), one of the competitors isn’t even a barista. In fact, they’re a software engineer.

Yes, that’s right. Nisan Agca hails from Istanbul and is 2016’s Turkish Barista Champion. Despite being an amateur brewer, his passion for coffee is taking him to the WBC in Dublin in July.

Perfect Daily Grind is partnering with Nisan, who will be sharing his entire training process with us. So read on to find out about how he qualified – and don’t forget to subscribe to our newsletter if you want to read the updates as they’re posted.

Despite the odds stacked against him, Nisan claimed victory at the Turkish Barista Championships.

It was Valentine’s Day and I was in Berlin with my girlfriend, cupping coffees at Barn Roastery. And that was where I met the person who would later make it possible for me to compete: Ruffatti Batlle, an importer of Salvadoran coffees.

A couple of months later, our national chapter announced their barista competitions. Although I’m not a pro barista, I was desperate to show off my passion – and so I decided to compete.

The first time, I placed second. Not bad for a “home barista”, right? And the second time… I won, becoming Turkey’s National Barista Champion.

As soon as I’d decided to compete, I sent a message to Ruffatti. This championship would require some truly beautiful coffee, and I could think of no-one better to help me. After another trip to Berlin and cupping all of his coffees, I had chosen the one that I knew the judges would love: Don Nacho’s honey pacamara.

Yet at this point, it was only 4 weeks to the competition – and I was nowhere near ready.

So I reached out to roastery Petra Coffee and Salvadoran farmer Cesar Magana, who was temporarily in Istanbul. Magana didn’t just know Salvadoran coffee; he knew everything about Salvadoran coffee. In fact, he even knew Don Nacho himself.

As a home barista, I don’t have access to the fanciest high-tech machines. Fortunately, though, I had a lot of friends and roasteries who were willing to help me.

At home, I had a one group machine and an EK43, so most of my prep was done with these. However, I also trained 4 or 5 times at Soho House Istanbul with a La Marzocco PB; 2-3 times at Origin Coffee, on their Nuova Simonelli Aurelia T3; and, 2 days before the competition, on Kronotrop Roastery’s 2 group La Marzocco Linea.

It’s really is thanks to the help of my friends and these coffee professionals that I was able to win the Championship.

In a Barista Championship, you need to make 12 drinks in quick succession: espresso x4, milky drink x4, and your signature drink x4.

The signature drink is the highlight of your performance. But to concoct something that’s truly special, you need to understand your espresso.

Don Nacho’s honey pacamara has this amazing stony, fruity acidity that brings plums to mind. It has the sweetness of panela sugar and the floral notes of rosehips. It’s juicy, clean, full-bodied, and has a smooth finish. (D’you see why I picked it?)

For my signature drink, I made a cascara syrup to highlight the floral notes and rosehip notes.

Then – and this is the tricky part – I made a maceration. This needs to be prepared beforehand and took, for me, 3-4 hours. I used black plums; not only is there a plumminess to this coffee,  but the fruit’s in season right now, promising a fresh, delicious taste. The next step was to add panela sugar and wait.

Then finally, when the sugar has melted, you can collect the juice. Mix together the cascara syrup and the maceration, and you have it: a delicious signature drink that enhances the natural taste of the coffee.

Does a software engineer have what it takes to win the WBC? Wait and see.

Next step: see you in Dublin!

I’m going to give myself a week’s rest, and then it’s time to start training for a far more intense level of competition. Can I, as a home barista, succeed in the biggest international coffee championship there is?  Either way, I’m determined to try – and I welcome any help that anyone can offer.

Thank you for reading my story so far. Watch out for Part 2!