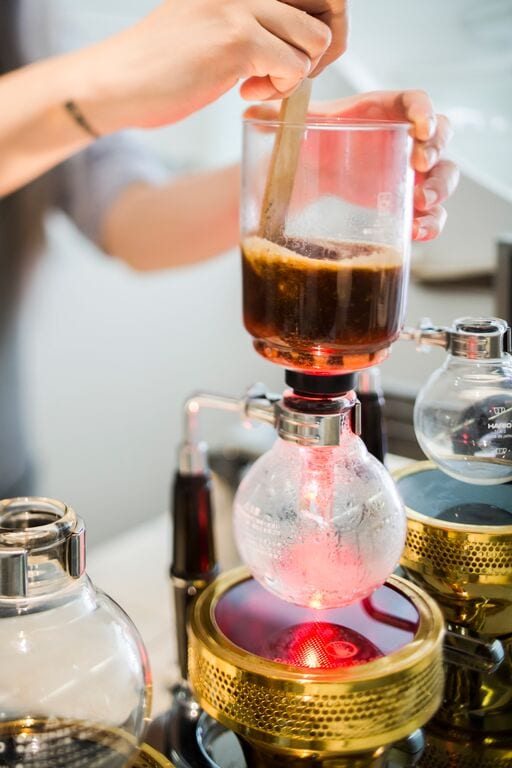 Total immersion brewing and filter/drip brewing are two worlds that rarely connect. Enter the syphon (also known as a siphon or a vac pot brewer). This beautiful device looks like something straight out of Breaking Bad, and brews coffee that’s both full-bodied and exceptionally clear.

So how does it work? Well, as the water in the bottom chamber of the syphon is heated and gases start to escape, a vacuum is created which moves the coffee to the top chamber. After the flame is extinguished, the air in the bottom chamber begins to cool, causing another vacuum and pulling the coffee down. Though it seems complex and unorthodox, it’s actually not that difficult to use.

The History of the Syphon

The story of the syphon begins with a few people who were fed up of bad coffee. An early version of it can be traced back to a man known as Loeff of Berlin in the early 1830s. Syphon coffee then spread throughout Europe, testament to how good it is.

A myriad of patents were filed for improvements of the original device, but the most notable of these is Madame Vassieux’s 1841 design. Featuring a decorative “French balloon”, it’s very similar in form to the syphons we use today.

The balancing syphon was another important development, also originating from the mid-19th century. It operates on the same principles as the French balloon design, but a unique feature is that it extinguishes its own flame. The two chambers of the balancing syphon sit side by side, and as the water is transferred from one vessel to the other, a balancing system based on a counterweight or spring mechanism is activated by the weight change. This in turn triggers the extinguishing of the lamp.

Toward the end of the 19th century, the syphon made its way to the U.S. It wasn’t until the beginning of the 20th century, however, that it was manufactured there. In 1915, Mrs. Ann Bridges and Mrs. Sutton of Massachusetts marketed the syphon under the name Silex, derived from: “Sanitary and Interesting method of making Luscious coffee. It is Easy to operate on account of its being X-ray transparent.” They also used the new oven-proof Pyrex glass meaning that, unlike many of its predecessors, the Silex wasn’t prone to breaking.

What to Expect From a Syphon Coffee

This method combines total immersion brewing (such as French Press) with filter brewing (for example, a V60), resulting in a full-bodied and very clean cup. The syphon is perfect for bringing out a coffee’s qualities, and it’s this balance that makes syphon coffee so unique.

I tried brewing a caturra coffee from the Buena Vista farm in the Pitalito, Huila region of Colombia on my syphon. The caturra had been roasted by Glen Edith Coffee Roasters of New York. It initially offered a bright cherry acidity, followed by warmer hazelnut and toffee notes on the finish.

As the water rises to the top of the syphon, grind 34g of coffee, using a medium-fine grind that’s slightly finer than drip.

Once all the water reaches the top, turn your heat down as low as you can without the water falling back down. Stir it a few times to cool the water; the ideal temperature is between 195℉ and 200℉.

Add your coffee and start your timer. With a paddle or a spoon, begin to dunk the grounds. Try to wet all of them while causing minimal turbulence.

Attentiveness is key with this brew method. Credit: @kaizencoffeeco, Instagram.

Allow the coffee to brew undisturbed for 90 seconds. Then turn off and remove your heat source. Stir the coffee a few times.

Remove the top chamber and allow the coffee to cool (some people decant the coffee in a chemex). Don’t forget to rinse your filter and store it in water in the fridge, this keeps it from drying and becoming brittle.

Joseph is a remote contributor

Interview With Andrea Allen: Where Are the Female Coffee Competitors?
Why You Should Consider Offering Single Shots
Is specialty coffee becoming more popular in Lebanon?
Discovering The History of The Espresso Machine at MUMAC, Italy