Perfect Daily Grind > Barista > Is Espresso & Tonic a Match Made in Heaven or Hell? 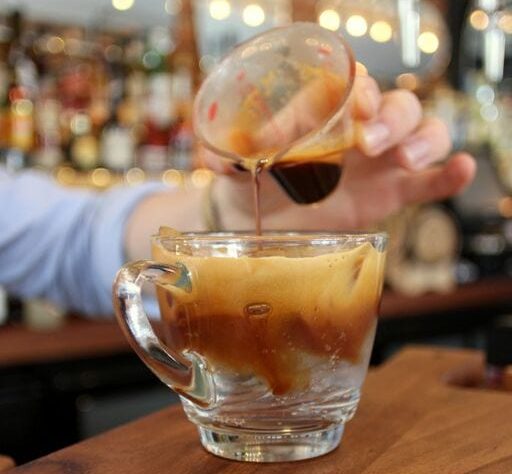 A coppery-coloured espresso suspended over a transparent, bubbly bed of tonic water—it’s easy to see the appeal. Stumptown Coffee, one of the pioneers of the exciting new combination, takes it a step further by adding luxardo cherries into the mix. Fruity, sweet, bubbly coffee—it already sounds perfect.

Stylish, sexy…and so much potential for disaster: the E&T. Credit: www.brianschiele.com

I work in a bar that specialises in G&T’s (Gin and Tonics), so when I first heard about the E&T (Espresso and Tonic), I was itching to try it.

“The promise of the G&T is so great: crisp and refreshing, on the dry side, a bit tart, slightly bitter, aromatic, crystal clear with lots of bubbles… but G&T’s almost always disappoint. Sometimes there’s too much gin and therefore too little carbonation. Sometimes there’s too little gin, and therefore too few aromatics and too much sweetness. How could something so simple in concept be so difficult to practice? The answer is simple. It is impossible to make a good gin and tonic using traditional techniques” ~ Dave Arnold, Booker & Dax

I’ve always agreed with Dave Arnold on this. Too often, warm gin and tepid tonic water are poured over copious amounts of watery ice, producing a flat, diluted drink that tastes of neither gin nor tonic. Any bartender worth his salt will tell you that a good G&T needs to be ice cold. The gin should be stored in the freezer, the tonic water should be stored as close to freezing as possible, and the ice, if you insist on using it, has to be hard and solid.

Before I wrote this article, I made myself a standard E&T. I filled a tall collins glass with ice, poured Fever Tree tonic (the recommended brand) till it was ⅘ full, and then pulled a double shot of espresso over it.

But does it live up to its promise?

Well, it looked pretty, for sure. The layering effect it produced was immediately attractive. But the taste? A complete and utter letdown.

Why The Basic E&T Fails

There were some inherent problems with my E&T:

The espresso’s oils and heat caused the CO2 in the tonic to quickly dissipate (making the drink lose its sparkle by the third sip).

It’s safe to say that most people immediately stir a layered drink. Yet after I did so, the espresso made my E&T chalky and opaque. The ice cubes also melted quicker because of the stirring action, so the drink became diluted.

The ‘complex bitterness’ of the tonic water wasn’t too bad, but without the fizz, it tasted like flat lemon-lime soda. The extra dilution from the melted ice also brought out an unpleasant astringency.

The Potential for an Amazing E&T

Just because my E&T was awful doesn’t mean we should give up on them. Actually, the flavour of the tonic water and coffee was great—if only upon the first sip.

What I concluded was that it is impossible to serve good espresso with tonic water in the way that it has been traditionally prepared and served till now. That doesn’t mean there isn’t a good way.

Troubleshooting my experience with the E&T, the first thing I wanted to work on was the carbonation aspect. Before I begin, we need to know that carbonation is a taste, not a texture. I’d describe it as sparkly or prickly, but it’s difficult to fully explain. So why do we believe it’s a texture? Well, what most people have come to believe is that the sensation of carbonation is due to pain in the mouth caused by carbonic acid (dissolved CO2 in water) combined with the mechanical action of multiple bubbles simultaneously bursting in your mouth. But that’s not true—you can get bubbles with nitrous oxide (N2O), but N2O makes drinks taste sweet instead of prickly. And your drink won’t taste like soda, even if you add acid to the drink. Therefore, carbonation in itself is an ingredient—just like salt or sugar.

1. Clarity: Any sediments in your liquid create space for errant bubbles to form. It also creates nucleation sites, a.k.a. surfaces that bubbles can cling to. The worse the clarity, the greater number of bubbles, and the more the carbonation escapes.

SEE ALSO: Hydrosols: How to Make Brewing Water as Aromatic as Perfume

See how the bubbles are forming on the finger’s surface? That’s nucleation. Credit: en.wikipedia/nucleation

2. Temperature: A warm drink in a bottle has a lot of built-up pressure, which is why warm fizzy drinks foam when opened. The colder your drink is, the less pressure there is in the bottle, and therefore you can retain significantly more carbonation when opening it.

3. Composition: Adding things to a carbonated drink, such as ice or garnish, also creates extra nucleation sites. As of such, a properly fizzy drink should be served straight up (think champagne or beer).

Contrary to popular belief, tonic water contains almost as much sugar as soda (9.5-10% by weight), so the only real difference between it and lemon-lime soda is quinine. This intensely bitter compound is derived from the bark of the Cinchona tree, and is a medicinal herb that has been long proven to cure malaria (which is why it’s called tonic water).

Tonic water also has a much higher carbonation content (8-9 g/l) as compared to soda (5-7g/l), because it is used primarily as a mixer. Once tonic touches alcohol, it can lose up to 3-4g of that carbonation.

As an FYI, aged champagne usually has a mouth-ripping 11g/l while young champagne at an even more intense 12.5g/l. This is because, during pouring, champagne can lose up to 5g of carbon dioxide—even more if the bottle is popped and poured poorly.

I liked the flavour combination of coffee and tonic. The smokiness and bitterness of the coffee was lifted by the sweetness and fruitiness of the tonic. It was a flavour so good that I was dead set on fixing this drink.

To solve the problem of clarity, I, like Stumptown, used a cold brew concentrate in place of espresso. Also, because my cold brew was super, super clear due to it being agar-clarified , the problem of premature carbonation loss was solved. Additionally, the cold brew’s fruitiness and lowered bitterness had a much better flavour profile than the espresso. Win, win, and win!

I use 200ml tonic and 50ml cold brew concentrate. Note how the clarity of the cold brew helps retain the bubbles in the tonic. Credit: Dapper Coffee

But I wanted to take it one step further: I wanted to add MORE bubbles and MORE carbonation to the drink. So I threw the cold brew and tonic in a premixed ratio into an ISI whipper, and charged it with one CO2 capsule (for carbonation) and one N2O capsule (for bubbles).

After loading the N2O, be sure to degas the whipper before adding the CO2. This stops your drink from coming out super foamy. Credit: Dapper Coffee

Then I put the ISI whipper into a very, very cold fridge and left it there for a couple of hours to get the liquid as cold as possible—thereby eliminating the need for ice. This step also helps the CO2 to really incorporate into the liquid. To prevent further loss of fizz, I then served it in a champagne flute. The smaller mouth means there’s less surface area for precious bubbles to escape.

I loved the Stumptown idea of adding cherries to the mix, but since I wanted to omit any additional garnish, I simply added a couple of dashes of spiced cherry bitters to the drink instead. I also balanced some skewered luxardo cherries on the mouth of the glass for presentation.

And presto! A drink with all the flavours and beauty of the E&T, but with far better clarity and carbonation.

Different Ways to Mix Your E&T

There are a TON of artisanal tonic waters available in the market, and each have very different flavour profiles. Schweppes from the can is extremely citrusy; anything from Fever Tree is usually on the lighter, sweeter side; and East Imperial is mostly floral and botanical. Just like gin, different types of coffee can be paired with different types of tonics, so it’s up to you to play around with it.

My personal favourite mixer is Chinotto, a dark coloured soda made from Myrtle oranges. It tastes a bit like unsweetened cola and has a complex bitterness that I feel works with coffee even better than tonic water. It’s a little hard to get your hands on it, but trust me, it’s sooooo worth it.

So what do you think of the E&T? Let us know your reaction to it, as well as your favourite combination of coffee and tonic.

What Makes a Quality Tamper? Pullman Tamper Review
Avoid Losing Your Cafe: Protect Your Business in Under One Hour
Want to Understand Korea’s Coffee Boom? Look to Latte Art
Hydrosols: How to Make Brewing Water as Aromatic as Perfume