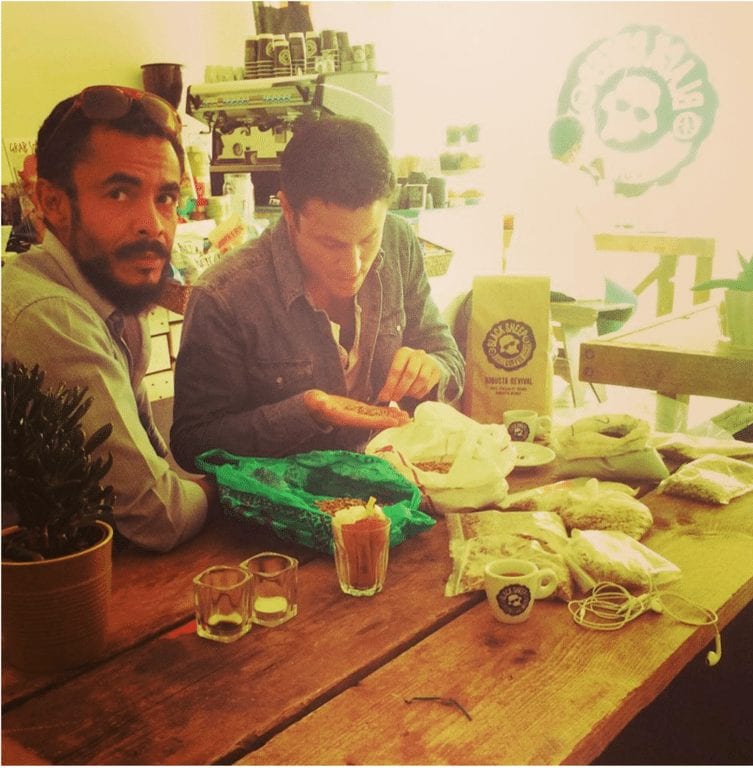 Coffee’s rich history has fascinated many. With third wave coffee, enthusiasts want to know about every step of its creation: the farmers that manage the plantations, the workers that harvest and process the coffee, and the roasters that seek the perfect roast profile.

Coffee is more than just a drink; it’s a way of life. Credit: @bigislandcoffeeroasters

In The Beginning, There Were Seeds and It Was Good

What begins as a seed in time becomes a tree producing beautiful white blossoms smelling of jasmine. The fruits then turn into cherries, and hiding inside these cherries are the “beans” we know so well.

The Botanical Kew Gardens in London are responsible for identifying over 120 different species of coffee, many of which are indigenous to Madagascar, Asia, and Australia. Of these species, Coffea arabica and Coffea canephora (Robusta) are the two predominant ones, and they are what many of us consume daily. Although there are many other members of the coffea genus, so far they haven’t proven viable for production.

Arabica accounts for about 80% of the world’s coffee production. Indigenous to Ethiopia, it’s generally grown at altitudes of about 3,000-7,000 feet above sea level, mainly in what is known as the “bean belt” between the Tropics of Cancer and Capricorn. This area provides the rich, often volcanic, soils; regular rainfall; and sunshine coffee needs to thrive.

Arabica requires special care as the trees are susceptible to pests and diseases. Coffee leaf rust, or La Roya, is a fungus that manifests as orange patches and impairs photosynthesis. It causes the leaves to fall, killing the tree and potentially destroying plantations if not properly treated. Arabica is also susceptible to pests like the Coffee Berry Borer, or Broca, a small beetle that lays its eggs inside coffee cherries. Once hatched, the beetle eats the cherries, drastically lowering cup quality.

Despite these obstacles, Arabica is the coffee bean of choice due to its smooth and pleasant taste compared to Robusta. A cup of Arabica coffee is aromatic and flavourful, with notes that can be described as floral, fruity, citrus, earthy, buttery, chocolate, caramel, honey, or sugar. The taste can also range from sweet to tangy, depending on where the bean is grown and how it is processed.

SEE ALSO: What is Geisha? The Reality of a Fantasy Bean

Robusta, native to West Africa, is grown at lower altitudes and higher temperatures. It makes up the rest of the world’s coffee production. The bean is small and round but contains twice the amount of caffeine (hence the name) than the ovular Arabica. The concentrated caffeine acts as a natural pesticide, helping to protect it from most insects. This makes it cheaper to grow and far easier to maintain. It also produces more crema and so is often used in blends.

Arabica is long and ovular. Robusta is small and round. Credit: www.martinezfinecoffees.com

Despite having positive qualities, it’s not a popular bean. In fact, the majority of coffee enthusiasts cringe at the thought of Robusta—primarily because it’s used for instant coffee or blended with Arabica to produce an inexpensive and low-quality product. Once roasted and brewed, the taste of Robusta is often described as bitter or harsh with a hint of wood and rubber. Yet while Robusta is typically shunned by most coffee aficionados and isn’t the standard bean of choice, a defence of it has emerged.

Gabe Shohet, co-founder of Black Sheep Coffee in London, serves and specializes in Robusta coffee. The café was founded by Shohet and a group of friends after they decided they wanted more out of the average cup of coffee; they prefer it strong, full-bodied, and highly caffeinated. As their name acknowledges, they have broken away from mainstream coffee culture.

Yet Shohet’s appreciation for Robusta comes with good reason. In his article, Fairness and E-Quality: The Case for Robusta, Shohet states that while Robusta’s reputation is well-deserved, it’s not the beans themselves that are to blame. Robusta is typically machine-picked which means everything from rotten and unripe beans to insects and branches are harvested. This combination is guaranteed to produce a bad cup of coffee.

So Shohet set out to determine what Robusta would taste like if it was treated with the same care and attention as Arabica. After months of trial and error, Shohet and company came across the world’s first specialty grade Robusta farm. The Sethuraman Estate in India takes care to hand pick, double wash, and tray-dry the Robusta beans. The result is a taste profile described as having more character than Arabica. The highly caffeinated drink gives that jolt some seek to keep them going throughout the day, and also has bold notes of walnuts and chocolate.

While Arabica may still be the bean of choice, Robusta is beginning to make a name for itself as individuals like Shohet ask consumers to give it a chance.

Vanessa is a contributor based in the USA