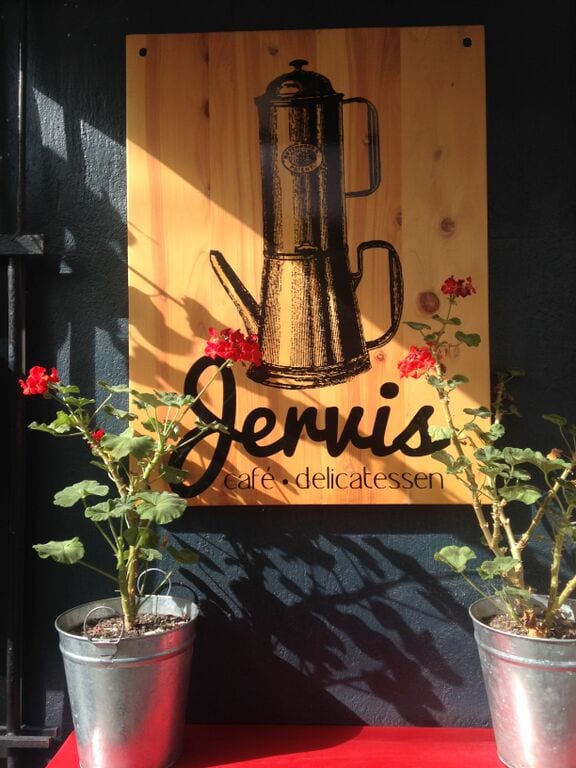 Jervis, one of La Floresta’s many trendy cafes

La Floresta is Quito’s version of your favourite only-locals-know-about-it neighbourhood: a combination of trendy restaurants and Quiteño sleepiness. It’s also a hotspot in Quito’s emerging specialty coffee culture. With a number of specialty coffee shops opening in the past year or two and a handful more on the way, La Floresta is now a must-visit destination for specialty coffee pilgrims passing through the old Ecuadorian capital. It also provides another wrinkle in the specialty coffee narrative—enthusiasts are often conscious of their impact at source, but less attention is paid to how their favourite cafe back home has impacted its surroundings. La Floresta’s rapid growth means permanent changes. These changes—driven largely by specialty coffee—give reason to pause and ask, “What do we mean when we speak of ‘coffee culture’?”

SEE ALSO: To Be (A Barista) or Not To Be? That Is The Question

A Small Shop With Big Flavour

Like most of the cafes in La Floresta, Jervis is young. It just recently celebrated being open for six months. Still, despite its youth, locals have taken to the little spot, and business has been steady in the first half of the year. It’s easy to see why: Jervis is a perfect little coffee shop. It’s cute and cozy but not cramped, due largely to its big windows that stay open and keep the place fresh and airy. Even better, you can sit right at the window and watch owner and barista, Juan Pablo, do his thing.

That thing, as it turns out, is pretty cool. I happened to visit during the “Semana de Café de Quito” (that’s Juan Pablo smiling in the link), a week-long event organized to promote the specialty coffee produced and served in the region. To celebrate, Jervis was serving up a smoked rosemary macchiato—very neat! But just as fun as the fresh, woodsy taste of the drink  was watching (and smelling) Juan Pablo light up a sprig of the herb and place it under a glass to be absorbed by the macchiato.

Traceability is a common feature among Quito’s specialty cafes

How Do They Create the Specialty Coffee Experience?

These are the moments that make specialty coffee so, well, special: the experience. And while there are plenty of factors that go into creating a specialty coffee experience—such as the locale, the music, and, of course, the quality of the coffee itself—Jervis Cafe, with its small space and accessible brewing station, highlights perhaps the most important element: the barista.

A barista is many things, but among the many caps he or she wears, in Quito the most important cap is that of coffee ambassador. In theory, it shouldn’t be difficult to fulfill this duty. After all, the superior qualities of specialty coffee over traditional jet-black roasts (or instant coffees) with bucket-loads of sugar would seem self-evident. In reality, baristas in Quito find themselves at a crossroads between two Ecuadorian traditions. There’s the old tradition of sugar-laden, low-quality coffee, and then there’s the emergent tradition of specialty coffee, with its assortment of bizarre brewing apparatuses (which are both literally and metaphorically foreign to the average Ecuadorian), but which values the coffee itself much more. It’s delicate work introducing such a radically different approach to a centuries-old tradition, and Ecuadorians, if not outright resistant to change, are at the very least generally content with their traditions.

All of the baristas I spoke with in Quito are conscious of their role as coffee ambassadors. They take their craft very seriously, but they also exemplify politeness and patience. You see them watch expectantly when a customer tries their espresso; you see them wince a little when that same customer adds a spoonful or two of sugar to it. They gently encourage patrons to “try this—just try it, without sugar first”, and are always happy to free a moment to chat with you about coffee.

Which is why, as Juan Pablo prepares his smoked rosemary macchiato, there is more going on than just an interesting flavour in the making. The patrons—myself included—take notice. We see something we’ve never seen before, we realize that there is more potential to coffee than the way we’ve always seen it done, and then, deliciously, we get to experience it.

What is a flat white & how is it different from a latte?
The Future of the Coffee Industry: Insights From World Of Coffee 2017
Dating a Coffee Lover? 5 Things You Need to Know
Costa Rican Reto Barista: An Innovative Barista Competition