Perfect Daily Grind > Barista > The World Latte Art Championship: What Does It Take to Compete? 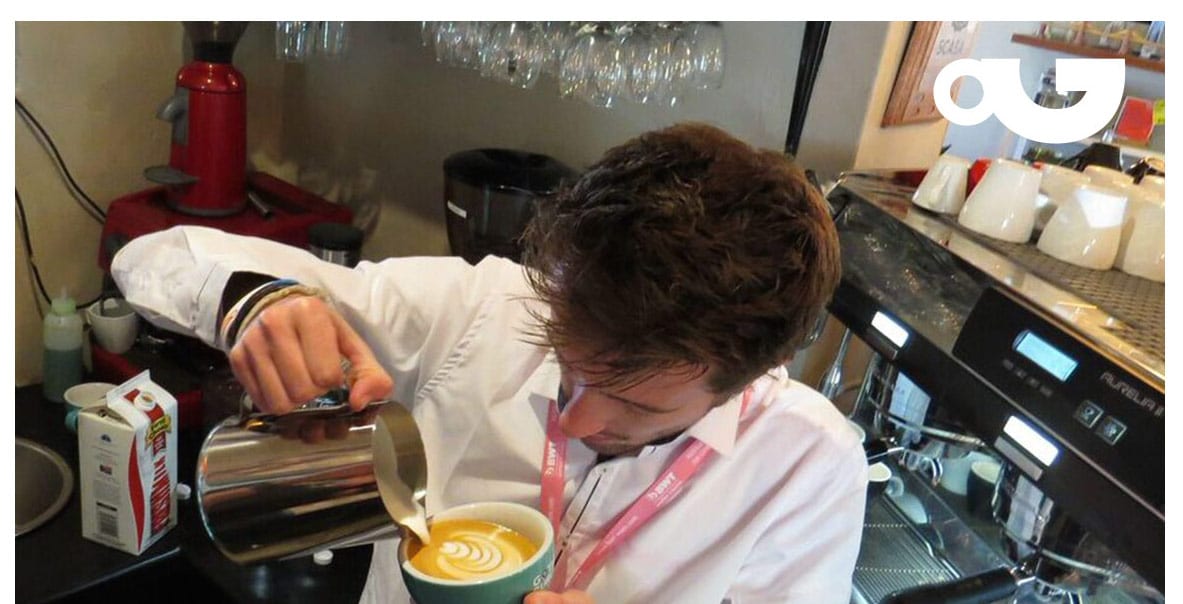 South Africa is a relative newbie to latte art. While in the U.S. it emerged in the nineties, it’s only in the last few years that it’s exploded across our coffee scene. And in 2015, for the first time, our country was represented in the World Latte Art Championship: the most prestigious, most competitive latte art competition there is. I had the privilege of coaching our champion, Byron Keet, through this incredible, grueling event. So how did we, the newbies, prepare to compete against the biggest names in latte art for the first time?

SEE ALSO: Preparing Yourself for the WBC: C. Rican Competitor, A.Bravo, Takes Us Through His Journey

Byron Keet in the zone—focused and over-caffeinated.

I asked Byron about his experiences after the event. Here’s what he had to say:

“Over the past 6 months, I have been prepping for my journey to Sweden. As the South African Champ, not only did I want to represent my country well, but I also wanted to enjoy, express and celebrate my love for coffee from this amazing platform. There was a great deal of preparation, and the bottom line was that I needed to decide what I was going to pour and then practice, practice and practice some more. In the last three months, I’ve used more than 10 kilograms of coffee—which equates to over 1,000 practice pours. The competition level was so difficult, but it was loads of fun, and I learned so much from the other competing baristas from  all over the world.”

I’ve been in the industry for years as a trainer, and also as a judge and coach in our regional and national barista and latte art championships. Over the last three years, I’ve seen dramatic growth and development in our local coffee culture.  More and more cafés are trying to fulfill the demand for latte art that’s taking the world by storm.

Byron Keet is not only the South Africa Champion; he’s also someone I consider a good friend. We both found the Championship incredibly stimulating, and left with a wealth of inspiration and knowledge.

Reflecting and having fun with latte art after the WLAC.

What Are the Requirements?

In the preliminary round, you are judged on your Free Hand Pour and your Designer Pour. If you make it through to the final round, you are also judged on a Macchiato Pour. The Free Hand Pour is a picture that your pour completely freehand, using the jug alone. With the Designer Pour, you can be a lot more creative. You can use a stylus to enhance your design as well as adding textured milk to the surface to draw with. For each pour, you have eight minutes to provide two cups. Not only must they be identical to each other, they must also match pictures that you provided the judges with beforehand.

Similarity isn’t the only thing you’re judged on, of course. The other criteria are: visual quality (of your foam), contrast, size, symmetry, positioning, creativity, difficulty, and overall appealing look. Then, your professionalism and your ability, both on stage and behind the espresso machine, are assessed.

The WLAC is demanding. It requires skill but also strategy, because when your competitors are so incredibly talented, you need to find an edge. With over 400 points up for grabs, and so many criteria, it’s a nerve-wracking experience. As well as the hours of practice Byron put in to ensure he could create his latte art creatively and efficiently, he had to keep his nerve despite the weight of the world stage and a massive crowd bearing down on him.

Byron didn’t make it to the final round, but we were very happy with his achievement. The experience was a major confidence builder and gave us both a great injection of coffee passion. The boundaries of what we thought we could do have been raised and valuable lessons have been learned.

We had prepared ourselves by looking back at the 2013 and 2014 Champions, yet the standards had increased so much. The lesson? No matter how ready you think you are, at this level, it is never enough. Some of the guys in Sweden adopted a less is more attitude, telling us “we like to keep it simple” and “we try not to over-complicate it—we like to keep it clean”. While that might work for design, when it comes to preparation, the opposite is true. More is definitely better.

For me, as a trainer, there were three main lessons I learned:

1. Creativity. Pour a bit of yourself into that latte art, and create your own unique designs.

2. Composure. Stay focused on your goal—but don’t forget to enjoy it, either!

3. Confidence. You made it to the world stage for good reasons, so believe in yourself.

I’ve watched the performances for years. It’s amazing how all these enthusiastic competitors from all over the world push the limits of their creativity. And not only do they come up with designs that seem nearly impossible to do, they somehow make it look so easy. It’s inspiring to think of our ability to create such beautiful and original art and to know that gaining that skill only requires time, experience, and energy.

In collaboration with J.Le Roux.

Shaun is a contributor based in South Africa and Co-founder of the Red Band Academy.